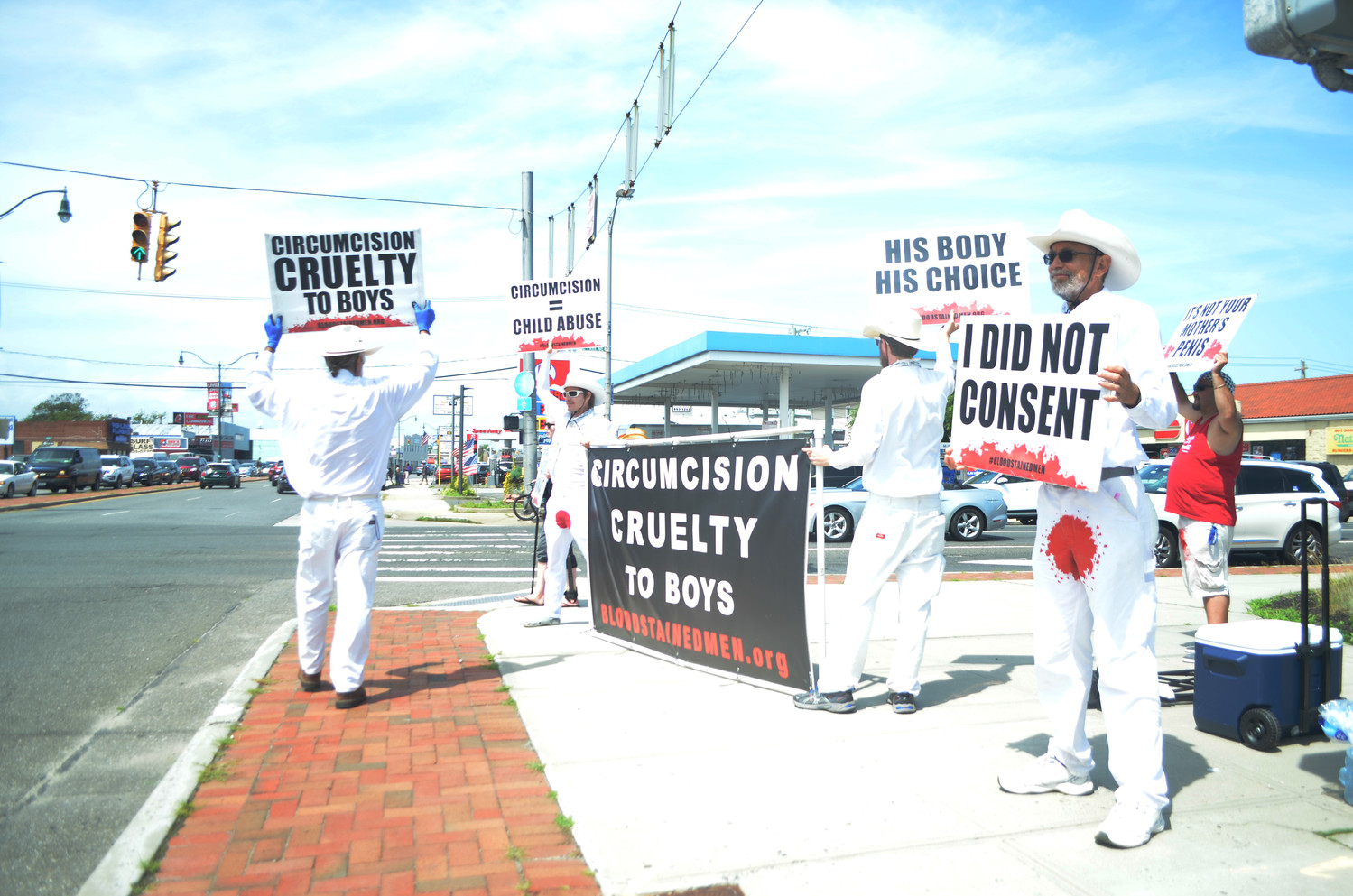 A group of people clad in white clothes with fake bloodstains on their pants marched through the intersection of East Park Avenue and Long Beach Boulevard on Tuesday to protest the practice of circumcision.

The protesters are part of the California-based Bloodstained Men & Their Friends, a national nonprofit organization that raises awareness about the potential harms of removing a male infant’s foreskin.

The stains on their clothing, which represent circumcision, drew attention from passersby and drivers, some of whom honked their horns and yelled profanities at the group. One local resident, who declined to be identified, said they were “kooky.”

A spokesman for the Long Beach Police Department said that police were monitoring the protest after the department received a few complaints from residents.

Nearby business owners declined to comment during the demonstration, though a number of residents expressed shock on Facebook and other social media sites.

“It’s vile — no need for the blood,” one resident commented on Project 11561, a local Facebook page.

“I first saw something like this in Seattle when my daughter-in-law was pregnant and knew it was going to be a boy,” Ellen Miller said on Project 11561, a local Facebook page. “It was interesting to see this demonstration and certainly opened up conversation.”

“All my years in Long Beach, never seen anything like this,” Deb Jay Linsalato Rodriguez added.

The protesters walked from crosswalk to crosswalk in the intersection from around 10 a.m. to 3 p.m.

The organization came to Long Beach as part of a Northeast tour, stopping in cities in Maine, Rhode Island, Pennsylvania and Delaware. The protesters came from all over the country, from as far away as Hawaii and as close by as Long Beach.

Harry Guiremand, the group’s spokesman, said that it consists of about 100 people who protest regularly, and about 1,000 people have joined the effort overall. The group’s Facebook page has garnered more than 20,000 “likes.”

Guiremand said that circumcision can lead to many health complications, and usually takes place during infancy, when those who undergo the procedure are unable to consent. He added that other countries have condemned American circumcision practices.

“This kind of unnecessary genital alteration is illegal for girls, and boys are entitled to the protection of the law,” Guiremand said. “This is a major ethical problem for American medicine, and they have failed to address it.”