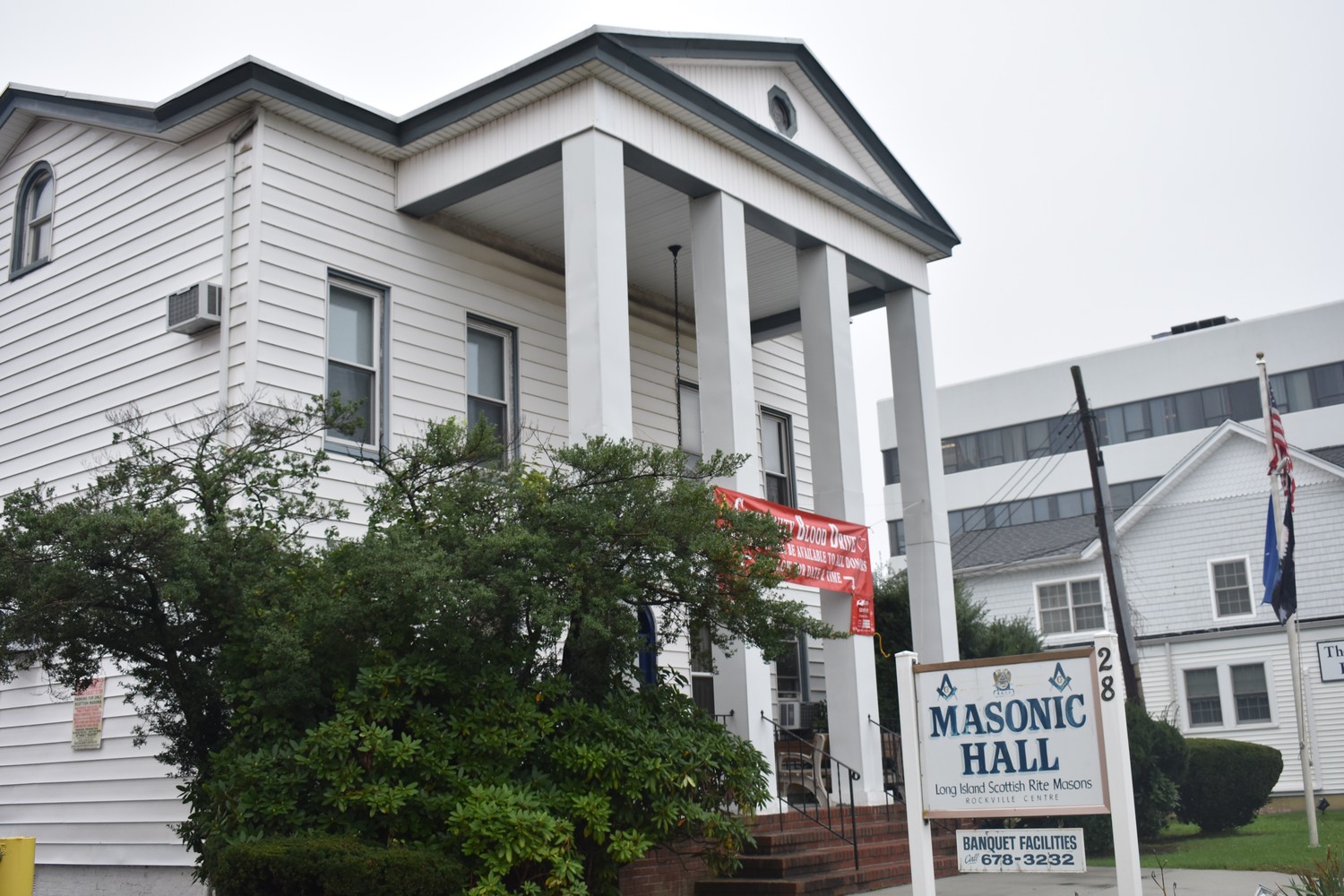 The building at 28 Lincoln Ave. houses the Valley Masonic Historical Society and the Scottish Rite, an offshoot of freemasonry.
Ben Strack/Herald 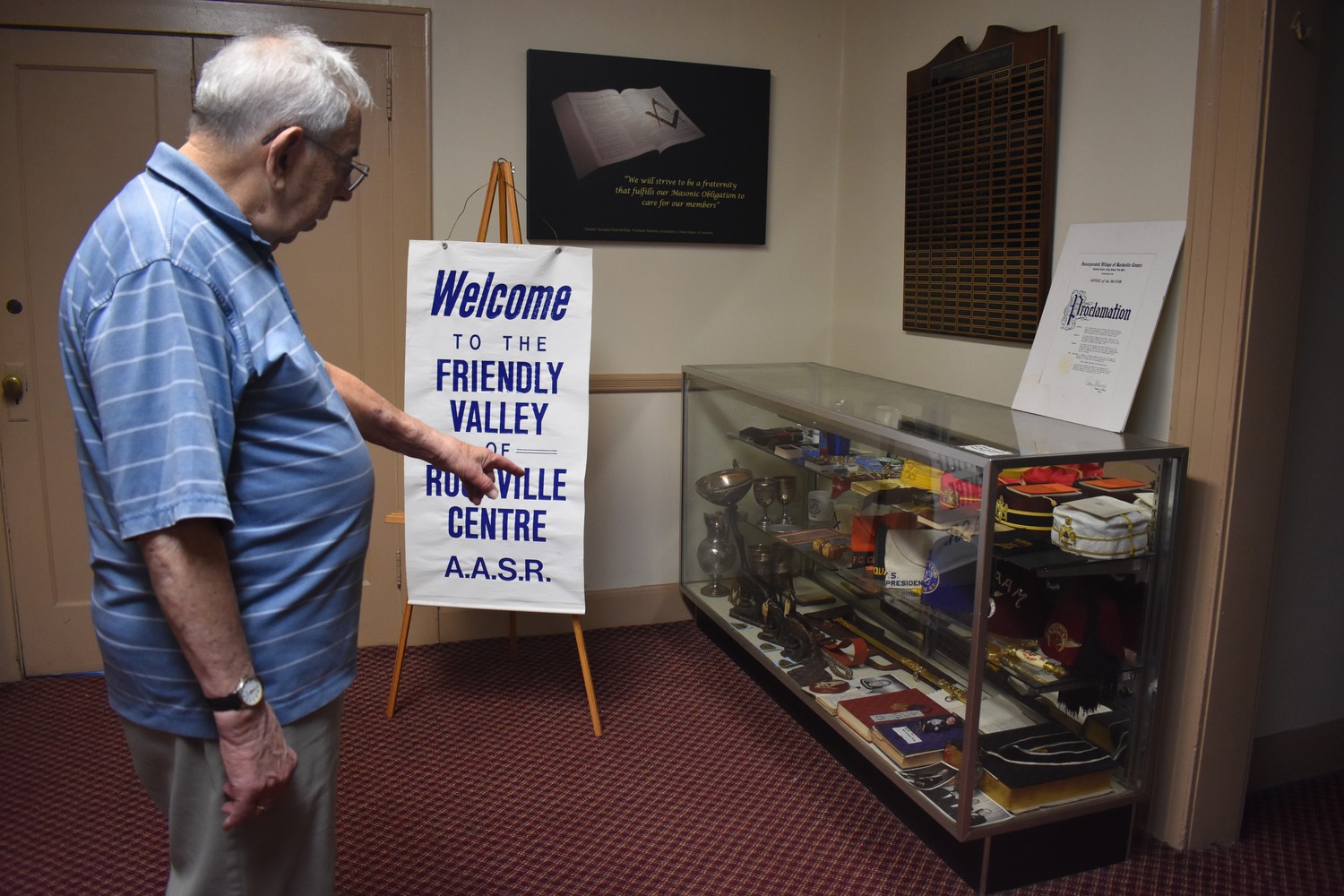 Bob Stack, a freemason for more than 50 years, showed off the display cases he recently filled to preserve the history of fellow members of freemasonry.
Ben Strack/Herald 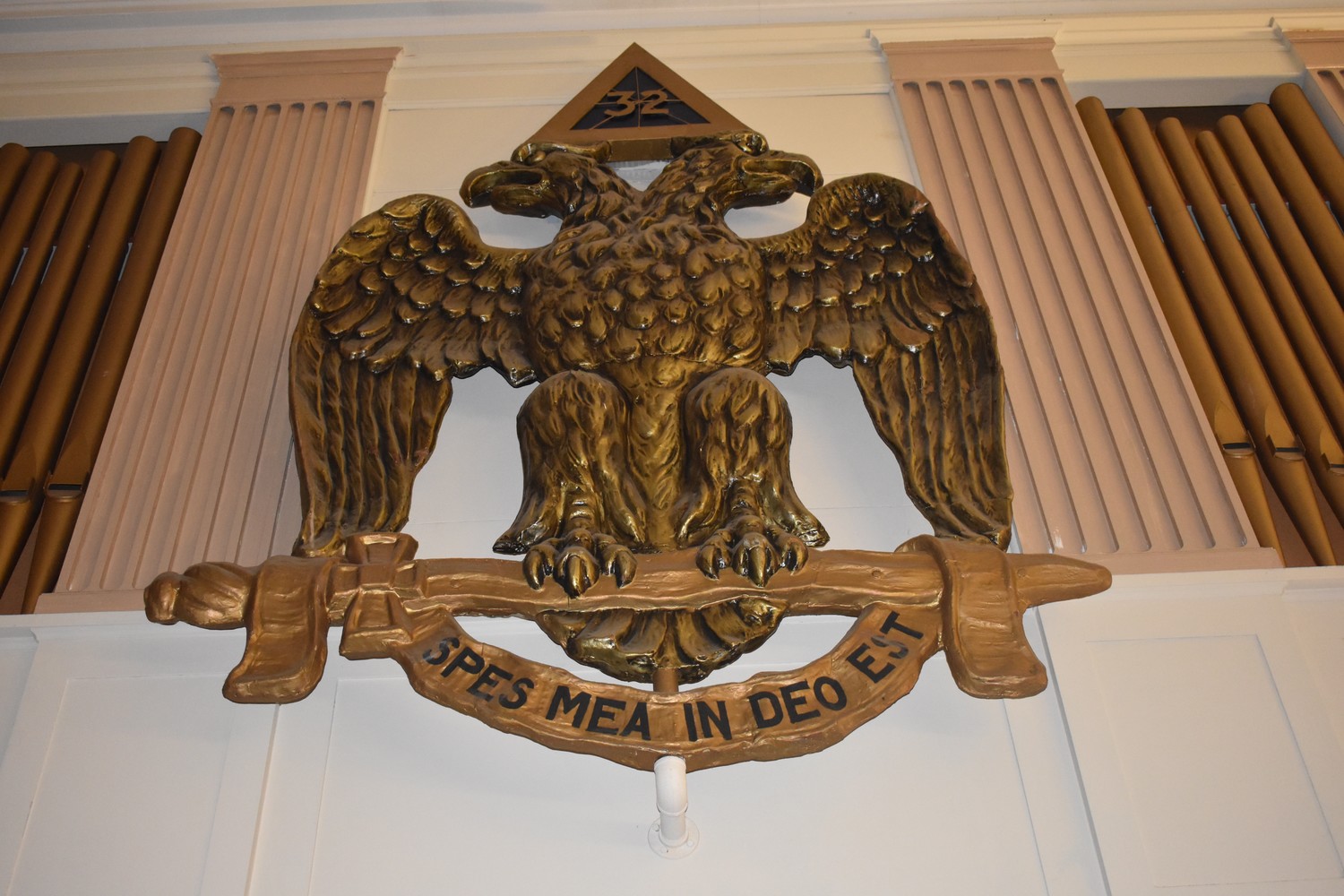 The double-headed Eagle of Lagash is used as an emblem by the Scottish Rite of Freemasonry.
Ben Strack/Herald
Previous Next
By Ben Strack

The building, which welcomes visitors with tall columns and a gold-colored door knocker, dates back to the 1850s and houses the Valley Masonic Historical Society and its new museum. Members of the Scottish Rite, a branch of freemasonry first established in 1801 in South Carolina, use the space to continue instilling the values of the fraternity.

Former Grandmaster Bob Stack, of Hewlett, who became a freemason in the 1960s, joined the Rockville Centre lodge about 10 years ago and has served as its secretary ever since. “We teach morality through the use of masonry tools,” he said.

The exact origin of freemasons is unknown, but many scholars think they arose from the stonemasons’ guilds in the Middle Ages. In 1717, four lodges in London formed the first Grand Lodge of England, and freemasonry later became popular in colonial America, where it spread ideas like the liberty of the individual, freedom of religion, the formation of democratic governments, and the importance of public education.

Over the years, freemasonry developed into a worldwide fraternity emphasizing personal study, self-improvement, and social betterment through volunteering and philanthropy. To become a freemason, you must go to your local lodge, learn about the fraternity and ask for a petition. Members move up to different degrees as they learn more.

Stack showed off the glass display cases around the Rockville Centre lodge, which hold memorabilia from deceased “brothers” that he has collected over the last decade for the sake of “show and tell.” Aprons dating back as far as 1921, which are worn to indicate rank, filled one case just inside the front door. Upstairs, mannequins wearing fraternity uniforms flanked a large portrait of George Washington.

A few steps past the portrait, doors lead to an expansive room with about 100 seats, where members meet each month. At the front of the room on the second step leading up to what looks like an altar, sits two square stones, which Stack said are symbolic for a freemason’s journey.

“One is perfect, and one is not,” he noted. “One has pieces and chunks and stuff out of it. . . . We take our lives, which are not perfect, and our main concern in living a life in society and amongst our brothers is to be perfect.

“All the symbolism is nothing but a guide to that particular instance of a perfect person,” he added.

As lodges have closed over the years, Scottish Rite groups flock to the Rockville Centre hall to meet once or twice a month. About 600 freemasons, who live around Long Island and even out of state, belong to the lodge, Stack said.

Mark Berkson, of West Hempstead, a member of the Scottish Rite for five years, noted that he likes the camaraderie. “It’s just an enjoyable group of guys that get together and do things,” he said. “It’s a great way to grow as a human-being.”

Robert Cox, treasurer of the lodge since 1998, became a freemason in 1966, following the footsteps of his father and grandfather. “I have found it a very enlightening group of people,” said the former Lynbrook resident who now commutes to the lodge from Suffolk County. “I’m still proud to say I’m a mason and a Scottish Rite member.”

For Stack, the best part of the fraternity is the different kinds of people he has met over the decades. “Not everybody’s perfect … but you do the best you can, but if you can get through life and make a dozen or so staunch friends because of masonry, fine,” Stack said. “I think this fraternity has more to give than any other.”