Something fishy with East Meadow 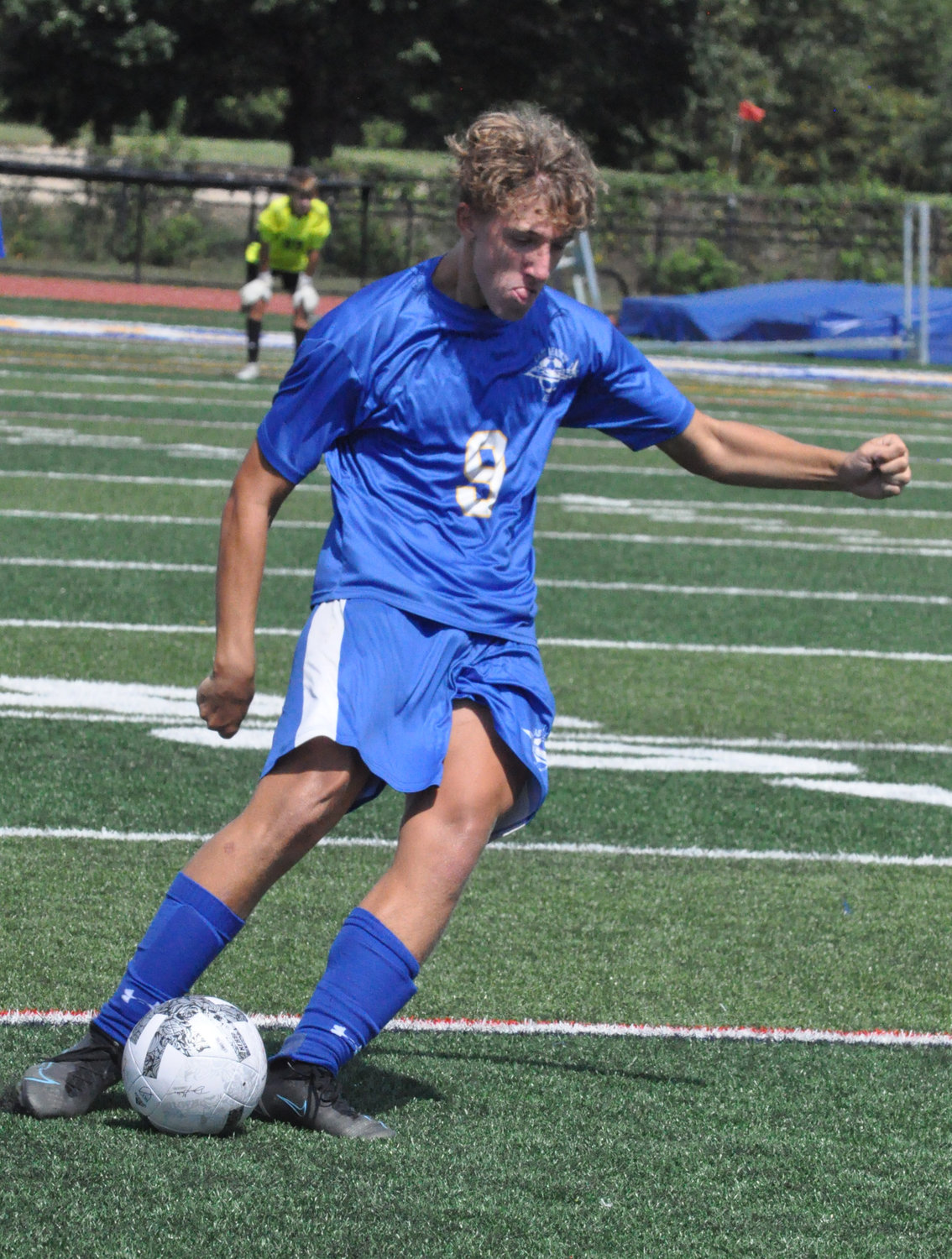 Junior Robert Derwin is one of the Jets’ captains and a key to their hopes of a turnaround.
Tony Bellissimo/Herald
By Brian Kacharaba

That’s the rallying cry being used by the East Meadow boys’ soccer team as it tries to get out of the funk it has found itself in in recent seasons.

The Jets have dropped four in a row after taking the season opener, including a 5-2 defeat against Hempstead last Saturday. The team’s only win was a 2-1 victory over Port Washington on Sept. 8 that ended a 12-game winless drought (0-8-4) that concluded the 2021 campaign.

So, to keep his players’ spirits up, coach Bryan Horrmann is using the metaphoric freshwater fish phrase made popular by the Apple TV show “Ted Lasso”, which was uttered during an exchange between soccer coach Lasso and one of his players who was just deked badly and verbally embarrassed by a member of the opposition.

“One of the lines [Ted] used is what’s the happiest mammal on the planet?” Horrmann explained. “And it ended up being a goldfish because goldfish have 10-second memories. So, you just gotta move on to the next game. We don’t focus on the past, we don’t focus on mistakes.”

But the Jets’ 1-4 record may not tell the whole story. The Jets have either led or been tied at halftime in each of the first four games and the offense is showing signs of life with nine goals in five games after being shut out in five straight last October and seven times overall in 2021.

Sophomore Dylan Wauchope has provided plenty of excitement on offense with six goals, including two each against Uniondale and Hempstead, and his second-half tally against Port Washington proved to be the game winner.

“He’s going to get stronger [and] he’s going to get faster, which is great,” Horrmann said. “He’s very crafty and thinks quick on his feet. He can get out of very tight spaces. Very confident with the ball. As a tenth grader, you don’t really see that very often.”

Senior Lucas Tobar and juniors Robert Derwin and Raymond McLeod were the other Jets to find the net so far this fall. All three are team captains along with defenseman Evan Weinstein, who has two assists.

Midfielder Jayson Torres has been solid with his defensive positioning, poise, and ability to distribute the ball down the middle, according to Horrmann, and fellow junior Alex Nicolaou can play multiple positions thanks to his strong foot and dependable play on defense. McLeod’s versatility lends him to play outside back, outside midfielder and forward.

The team has other young defensmen with plenty of potential in Weinstein and Andrew Velasquez at center back and freshman David Flores at left back. Junior goalkeeper Jack DeVoti is averaging almost seven saves a game and made a highlight-reel stop against Plainview JFK on Sept. 10, when he punched away a shot heading for the top corner.

The Jets host Baldwin on Thursday before visiting Syosset on Saturday.