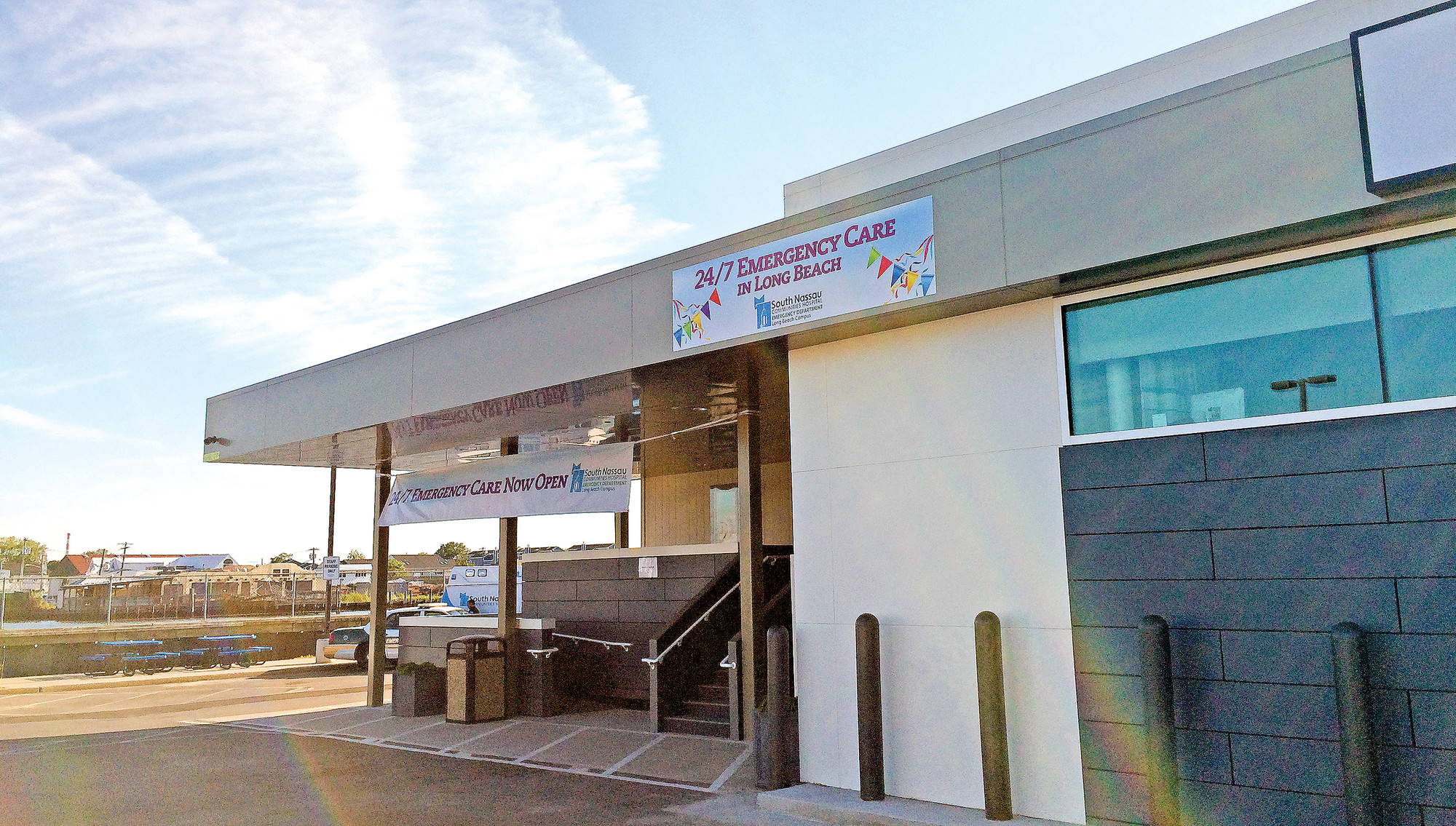 South Nassau Communities Hospital opened the doors of its temporary free-standing emergency department on the former Long Beach Medical Center campus last year. SNCH plans to invest $40 million on a new medical pavilion on the site, but a group of residents filed a lawsuit on Tuesday against FEMA over South Nassau's proposed use of disaster relief funding to expand its Oceanside campus.
Courtesy South Nassau Communities Hospital
By Anthony Rifilato

A group of mostly Long Beach residents filed a federal civil rights lawsuit against the Federal Emergency Management Agency on Tuesday over South Nassau Communities Hospital’s proposed use of $154 million in FEMA funds that it was awarded after it acquired the former Long Beach Medical Center.

The lawsuit, filed in U.S. District Court in Central Islip by several members of the Beach to Bay Central Council of Civic Associations — a group that has been advocating for the rebuilding of a local hospital — claims that the funding was meant to restore medical services in Long Beach.

South Nassau, which is not named as a defendant in the complaint, has earmarked the bulk of the funding for an expansion of its Oceanside campus, while planning to use $40 million to construct a medical pavilion with an emergency department on the former LBMC property.

The 911-receiving facility, which would operate 24 hours a day, is expected to open in 2019. And though it would also offer X-ray and CT imaging capabilities, and may include services such as dialysis, behavioral health and family medicine, the facility would not operate as a full-service hospital, which many residents have called for.

LBMC was badly damaged in Hurricane Sandy, and despite efforts to reopen, the state Health Department pressured the cash-strapped facility to declare bankruptcy and merge with SNCH.

South Nassau was awarded the FEMA funding when it acquired LBMC in 2014 for $11.8 million in a bankruptcy sale. The deal hinged on an agreement between South Nassau and FEMA, which pledged to release the Sandy aid to South Nassau to redevelop health care services in Long Beach and surrounding communities.

South Nassau officials have explained that under “alternative use” legislation introduced by Sen. Charles Schumer after Sandy, the hospital can also use the funding to bolster services and infrastructure at its Oceanside campus.

South Nassau officials say that the expansion is needed direly. The hospital’s emergency department is designed to handle 35,000 visits per year, but actually takes in around 67,000. The expansion would expand the emergency department from 16,000 to 30,000 square feet, allowing the hospital to see more patients in better settings. The hospital will also expand its critical care unit from 22 beds to 46, more than doubling its capacity.

However, the lawsuit claims that FEMA violated the plaintiffs’ constitutional rights under the 14th Amendment by allowing the funds to be spent in Oceanside and disregarding community input. Members of Beach to Bay — Barbara Bernardino Dubow, Mark Tannenbaum, Dr. Martin Gruber, Constance DiBeneddeto and Ed Glister — are seeking an injunction to halt the distribution of the funds and an advisory opinion from the court to determine whether the money is being used appropriately.

"We are asking the court for a decision regarding the alternative plan option,” said Francis McQuade, the attorney representing the group. “We are asking if the distribution of the FEMA dollars transferred from Long Beach to Oceanside is justified. We are asking the federal court to give an opinion on whether due process was followed, and whether the alternate use in Oceanside was justified. I think we’re going to win and it’s in the people’s interest.”

South Nassau officials said they have not yet reviewed the complaint. “We believe any action taken by the plaintiffs, which impedes the restoration of important health care services to the barrier island or may imperil federal aid in the aftermath of Superstorm Sandy, is without merit,” the hospital said in a statement. “The hospital will continue to work with responsible civic leaders and local legislators to work toward the further development of vital services which meet community need while assuring the appropriate stewardship of limited financial resources to all the south shore communities it serves.”

Susie Webb, a spokeswoman for FEMA, declined to comment on the lawsuit, but said that South Nassau qualified for the funding after it acquired LBMC, and that FEMA is currently reviewing the state's request “for a project change that would cover alternate use of funds.”

A number of public meetings and forums were held with South Nassau and the state Health Department over the past few years, most recently in March, when South Nassau presented its plans for the medical pavilion and the results of an independent study that concluded that a full-service hospital on the barrier island would not be sustainable, and would lose money every year.

The report recommended expanding emergency medical services in Long Beach so that the new facility is capable of handling 65 to 75 percent of all local ambulance calls; increasing access to primary-care physicians; and improving behavioral health services and care for the elderly, among other steps.

SNCH officials maintain that a temporary emergency department in Long Beach, which opened last year, is capable of stabilizing and treating patients, and those who require hospital admission or advanced treatment are transferred by ambulance to South Nassau or a hospital of their choice.

SNCH officials maintain that a regional hospital with local ambulatory hubs is the trend in health care. They recently said that the temporary emergency room has treated nearly 7,000 patients, and a survey in May found that respondents were “overwhelmingly” satisfied with the care at the new facility.

Still, the residents who filed the lawsuit have questioned the survey and maintain that the proposed medical pavilion would be inadequate to meet the needs of a “geographically isolated” community, and could not accept ambulances with patients suffering from certain “time critical” medical conditions, including trauma, stroke, hip fractures, difficult pregnancies and other emergencies. Beach to Bay has pushed for a smaller hospital, with fewer beds than the LBMC’s 162, offering in-patient care that it says would be financially viable.

“Our fear,” Bernardino Dubow said, “is that they’re going to build a campus in Oceanside and we will not get the medical facility that we need on a barrier island that’s isolated.”
Report an inappropriate comment