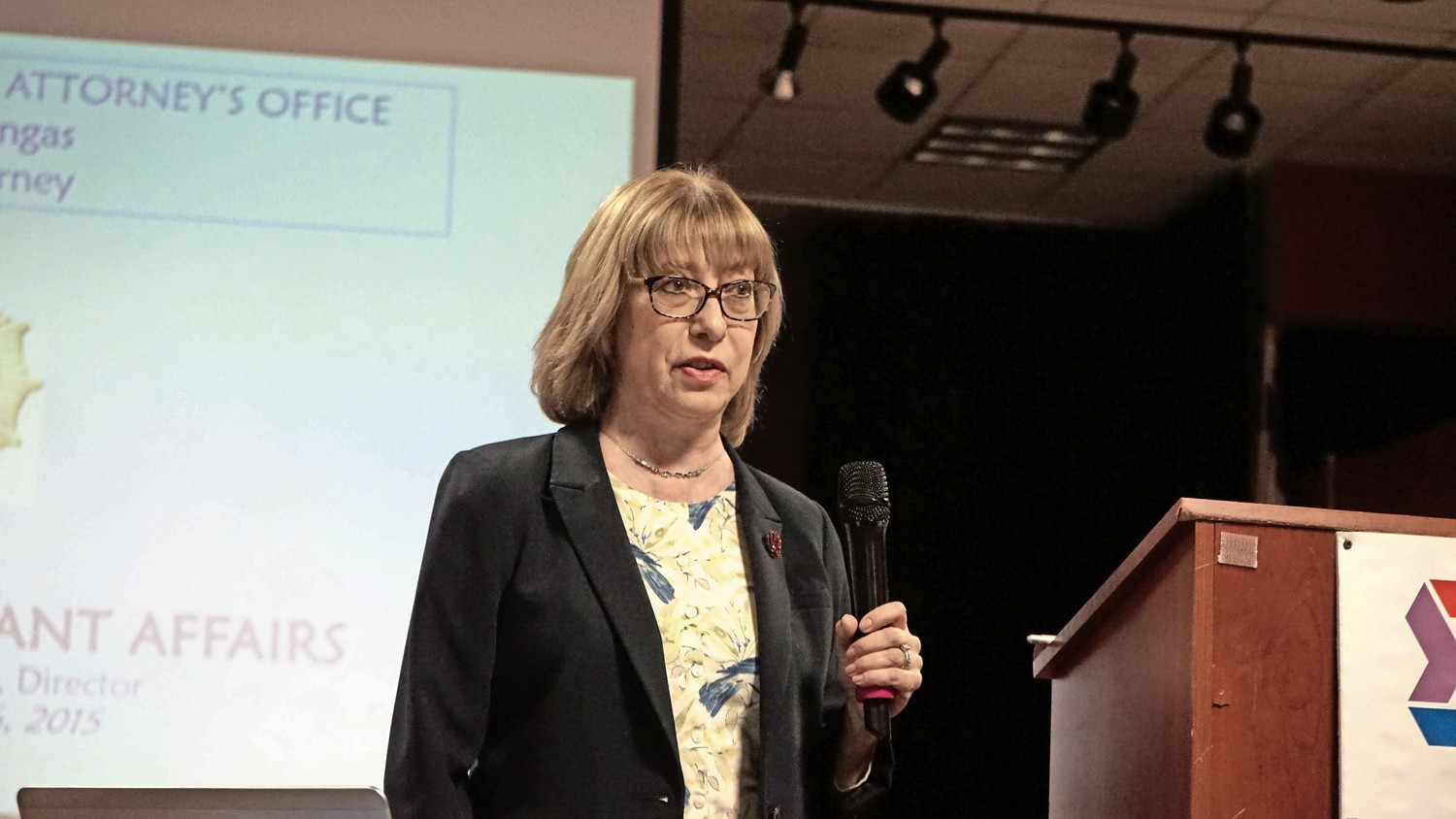 Silvia Finkelstein, director of immigrant affairs for the Nassau County District Attorney’s Office, talked about the rising fear of law enforcement among immigrants at a conference in Oceanside earlier this year.
Peter Belfiore/Herald
By Ronny Reyes

Elise Damas, director of the Pathway to Citizenship Long Island Program at the Central American Refugee Center in Hempstead, says she is really worried about the possible end to the Temporary Protected Status program for El Salvadorans, Hondurans, Haitians, Nicaraguans and Guatemalans because it could lead to a rise in crime.

TPS gives certain immigrants from war-torn or weather-ravaged countries work visas and defers them from deportation action. The program’s end, announced recently, could create nearly 10,000 new undocumented immigrants in the county when they lose their TPS status at the end of 2019. Damas said she believes the end of TPS, combined with a Nassau County Police Department policy of working with Immigration and Customs Enforcement, are eroding the trust immigrants have with police and causing fewer crimes to be reported.

Too afraid to seek help

Silvia Finkelstein, director of immigrant affairs for the Nassau County District Attorney’s Office, agreed, saying undocumented immigrants have grown afraid of law enforcement in the past year. While she and the Police Department stress the fact that undocumented victims and witnesses will never be questioned about their immigration status, fewer people have reported a crime to her office. Finkelstein said her office received more than 70 calls in 2016, but last year, she has only had three calls so far.

“We did have more people coming in-person than last year, but it was through church and community groups,” Finkelstein said. “This means that people would rather reach out to their priests or community leaders than to police when they experience crime. There is a great reluctance to communicate with us.”

“I don’t plan on interacting with them anymore,” Cecilia, a TPS holder who works on Hempstead Turnpike, said. She asked that only her first name be used. “I won’t report anything.”

With the termination of TPS, there has been an influx of scams targeting TPS holders, offering them help to become permanent residents, according to many immigration advocates and local officials. The district attorney’s office says there have been recent arrests in those cases.

Finkelstein said the actions of the federal government, such as the sudden cancelation of TPS, also give abusers tools to continue their crimes. While she would not comment on specific cases because of their sensitive nature, Finkelstein said Nassau has seen several incidents in which abusers and their families threaten to call police and ICE on their victims if they try to seek help.

“People see the undocumented population as the perfect victims because they think no one will help them,” she said.

NCPD Assistant Commissioner Marianela Casas, who is in charge of community engagement for the NCPD, urged immigrants not to be victims.

She also said the cancelation of TPS would undermine all the department’s recent efforts to build positive relations with the county’s residents. “It’s wreaking havoc on local communities,” Casas said. “And we’re the ones dealing with the fallout. It’s not us. It’s the White House.”

County officials have said that the NCPD would continue to police as usual, which would include working and complying with ICE. County officials added that they might be arresting former TPS holders who drive with expired licenses — which lapsed along with their TPS — despite acknowledging that these immigrants would not have many alternatives to get to work or buy food. Officials hope Congress can pass legislation to fix TPS before residents begin losing.

The county’s policy of working with ICE has been the subject of controversy.

CARACEN and a local, undocumented woman filed a lawsuit against Nassau over Policy 3610 last November. Hofstra Deportation Defense Clinic attorneys Emily Torstveit Ngara and Roni Amit, who are representing both CARECEN and Jane Doe in the suit, said that if NCPD continues to honor ICE detainers and warrants, Nassau’s undocumented immigrants would be put in danger.

Former NCPD Deputy Commissioner John Haviken issued Policy 3610 in 2007, which outlines the department’s procedure when arresting foreign-born defendants. It instructs officers to work with ICE, despite no federal or state law requiring them to do so. State Attorney General Eric Schneiderman recently reminded police chiefs across the state that local governments could face suits for complying with ICE warrants and detainers.

“New York state law says warrantless arrests can only be made when there is probable cause that the suspect has committed a crime,” Amit said. “Nassau doesn’t have the authority to do this, and Schneiderman has sided with similar arguments in previous cases.”

Ngara and Amit argue that Nassau’s policy violates state law and are seeking to have Policy 3610 declared unlawful. They said that since 2017, Nassau has honored all the ICE detainers that it receives. Amit explained that because Jane Doe is currently seeking political asylum, her request would probably be denied if she were detained by the NCPD and turned over to ICE, as requests for asylum while under detention have a statistically low chance of being granted.

Donna Zak, of the Legal Aid Society of Nassau County, said the county has handed over more than a thousand people to ICE. County officials would not comment because of pending litigation, but the county is asking that the suit be thrown out, arguing that it shows no proof of injury.