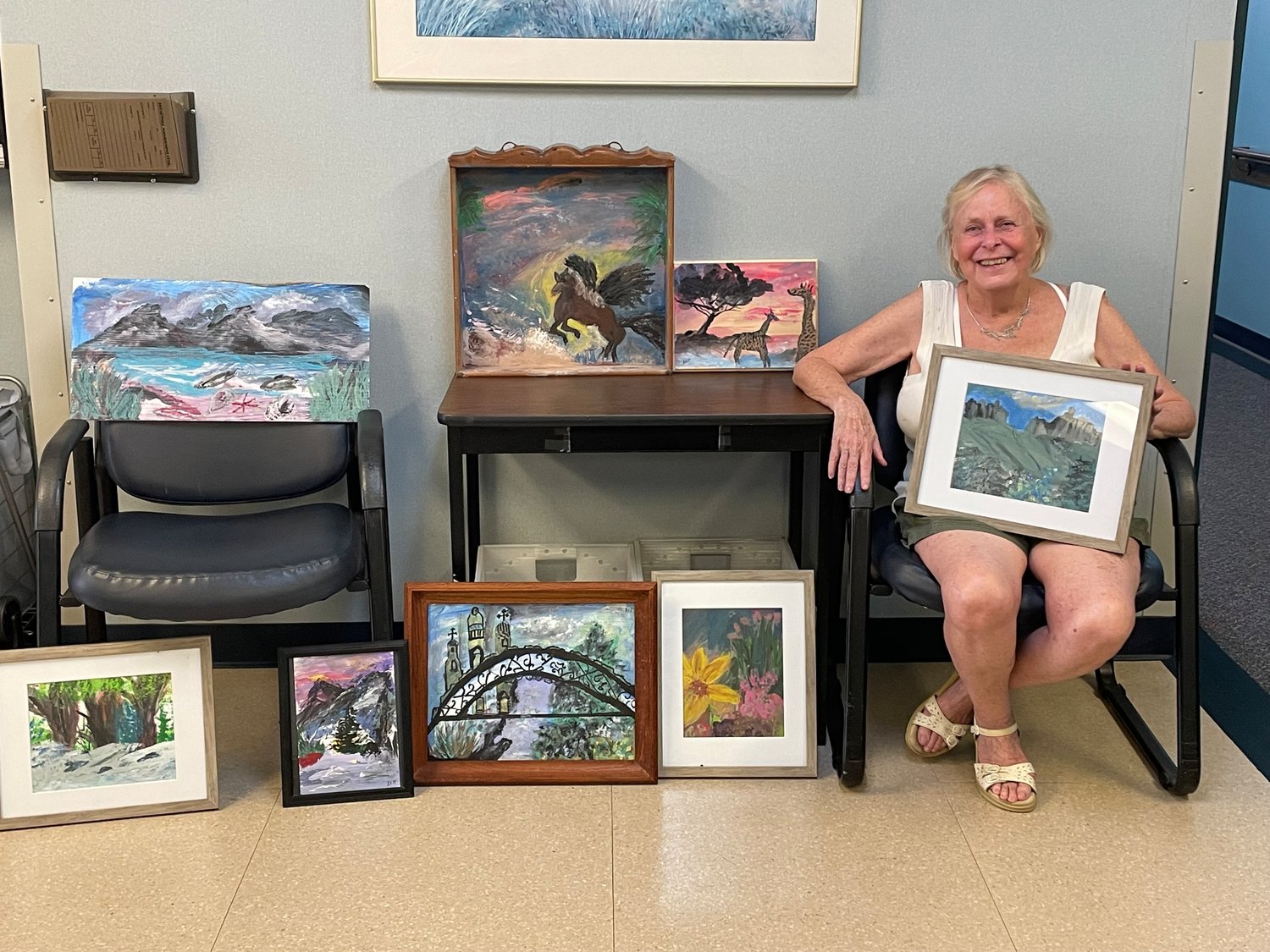 Though Rockville Centre resident Rita Meury, 74, is visually impaired, she has a knack for painting, and used her skill to help others stay positive during the coronavirus pandemic.
Courtesy Rita Meury 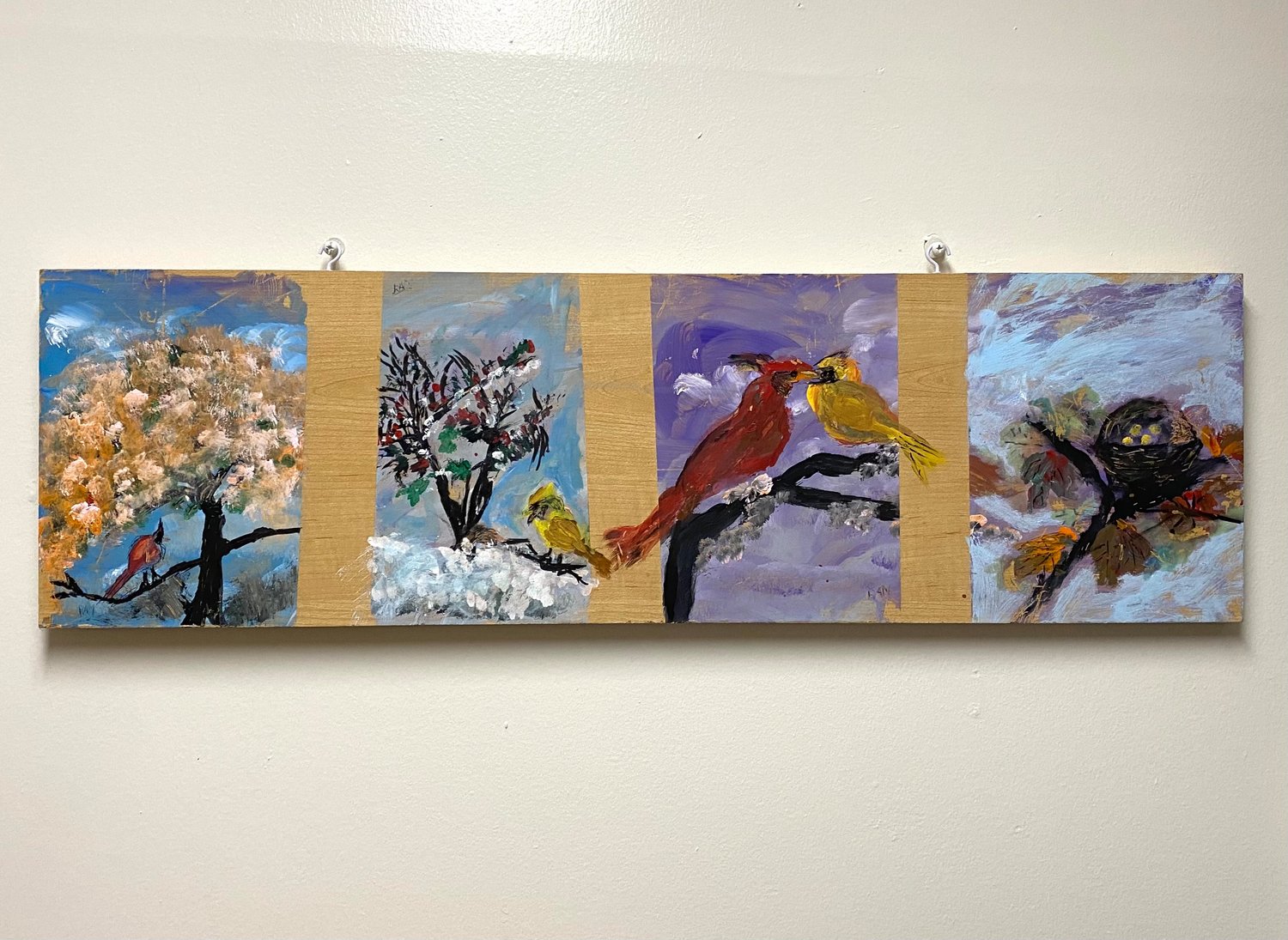 Meury said this painting was one of her favorites. It depicts the four seasons, one in each frame.
Courtesy Rita Meury
Previous Next
By Michael Smollins

Despite having no sight in her left eye and hindered peripheral vision in her right, Rita Meury spent most of the coronavirus quarantine painting, and giving many of her works to others to help lift their spirits in a trying time.

“It’s just wonderful,” she said of using painting as an artistic outlet. “It raised me up during Covid. The last time I was traveling before I started painting, I didn’t notice nature. Last time I went to South Carolina and saw a tree down there called Angel Oak, I wanted to make everyone stop so I could paint it, but they didn’t stop.”

Meury, 74, said she was never interested in painting until a few years ago, when she and a neighbor, Alice Malta, went to Michael’s, in Ocean-side, for a lesson. The instructor was a no-show, so the store offered them art supplies at a discount. Though she didn’t expect to fall in love with the hobby, Meury found that she had a knack for it, and now she gives out her paintings as gifts to friends and family members and uses the activity as a form of relaxation. She uses wood, tile, canvas and anything else she can get her hands on to continue honing her craft.

As she sat in her apartment at Halandia Courts in Rockville Centre, surrounded by many of her works hanging on the wall, Meury explained how she uses her computer to magnify images so that her lack of vision isn’t a hindrance. She was born with retinopathy of prematurity, or ROP, an eye disorder caused by abnormal blood vessel growth in the light-sensitive parts of the eye (such as the retina) in premature infants. Meury sometimes has issues when she tries to paint because of her condition, she said, but she sticks with it and manages to find her way.

When she was born, Meury was placed in an incubator, and the oxygen in it destroyed the retina in her left eye and made her right retina fold over. Many people with her condition, including Stevie Wonder, go blind, she said, but she can still see straight ahead with her right eye despite the loss of peripheral vision. She said she frequently can’t find things around her home, and bumps into things from time to time. Nevertheless, she paints with obvious skill.

And she uses it not only to relax, but also to lift others’ spirits. At the height of the pandemic, she gave many of her creations to friends. She and her neighbors frequently met for socially distanced get-togethers at a gazebo at the apartment complex, and she would come with an armload of paintings and tell each person to choose one for free.

“I knew right away that she had a tremendous talent,” Malta said. “It was the original pictures that she brought to me, and I was like, ‘Oh my God.’ It was one of the first ones that she painted, and we knew she was a talented lady, and didn’t want to see her talent go to waste.”

Rich Malta, Alice’s husband, recalled that at the beginning of the pandemic, Meury frequently woke up late at night and walked around the complex to pass the time, and then she started painting, and found a constructive way to get through the night.

“Her experience with the art supplies has awakened a talent she was not aware of,” Rich Malta said. “Now life has a new meaning. Most of her time is spent exploring her God-given talent. It has opened a new world for her, and everything she sees inspires her to put her brush to the canvas, creating her masterpieces.”

Meury wanted to go to a writing workshop with Alice on the fateful day she discovered her artistic talent, but Malta said she persuaded her to go to the painting lesson instead. Meury said she only painted once in high school, but noted that her siblings also had a knack for it. She said her favorite paintings include bamboo with flowers, birds, horses and the ocean with seashells.

“This is what saved me during Covid,” she said. “I was so bored. I needed something, and I realized that during the quarantine it was a life-saver. If you’re not working, you’ve got to find something to keep you going.”

Meury, who has never married, grew up and spent most of her adult life in Queens, where she worked as a secretary, including at Citi Bank and Elmhurst Hospital Center. She moved to Rockville Centre in 2011 after she retired. Now her cat, Mickey, and painting consume much of her life. A dozen of her works hang in her apartment, and she keeps at least 30 others in a closet.

Meury said she had plenty of other hobbies before painting, including skiing, dancing, writing and poetry. But for now she is drawn to painting, and she said she hoped to continue lifting others’ spirits by giving away her art.

“My favorite part is that it makes me calm, because I’m a raving nut if I don’t paint,” she said with a laugh. “I listen to music, and sometimes I have it on a little too loud and I sing, even though I can’t sing, and I paint and I’m in another world. I’m just doing what I’m doing, and I get pretty messy sometimes.”