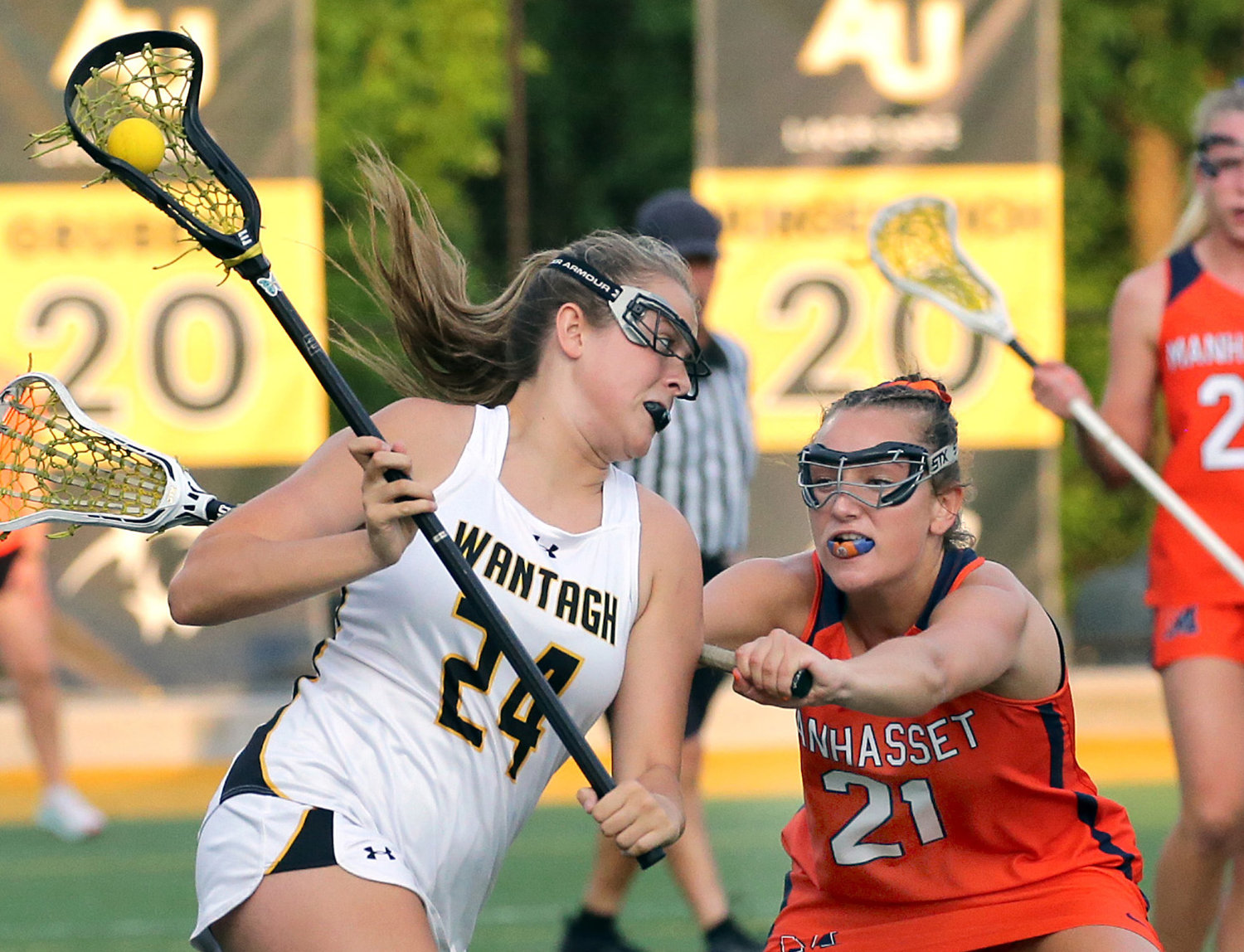 In a game that was not indicative of its season, the Wantagh girls’ lacrosse fell a game short of county title goal to the defending Class C champions on May 31.
After a Madison Alaimo goal tied the game nearly 10 minutes into the first half, Manhasset seized control with eight straight goals en route to a 19-11 county finals win at Adelphi’s Motamed Field.
The Warriors, who had defeated Manhasset 14-11 in the regular season in a rematch of last year’s county championship and were seeking the program’s first county title since 2017, finished the spring at 15-3 playing one of the toughest schedules in the nation.
“We didn’t get to where we wanted and there were a lot of extenuating circumstances that we couldn’t work through,  but they had an incredible season,” said fourth-year Wantagh head coach Robyn Rooney. “This season was one to be proud of and only the beginning of getting Wantagh back on top.”
Rooney was not on the sidelines for the county finals after giving birth to a baby boy the weekend before. The Warriors were also without the team’s third leading scorer Eva Ingrilli, who was injured in Wantagh’s 12-6 semifinal win against South Side.


“She’s our calming force on offense when things aren’t going our way,” said Rooney of Ingrilli, who has committed to play college lacrosse at Virginia.  “Not having her was huge.
The championship game started strong for Wantagh with Julia Nicholson giving the Warriors a 1-0 lead just 1:41 into the game. Junior attacker Olivia Nicholson, twin sister of Julia, struck two minutes later for a 2-0 lead and Madison Taylor responded to a Manhasset tally for a 3-1 advantage with 20:42 left in the first half.
Manhassset then quickly struck for three straight goals as part of an 11-1 run before Taylor tallied her second with 1:27 left. This sparked a late first half rally leading to late back-to-back goals from Juliana Cerasi with 31.2 seconds left and Riley Forthofer just 11 seconds later to make it 12-7 at halftime.
Wantagh was unable to continue the momentum into the second half, however, with Manhasset scoring the first three goals as part of a 7-1 run that put the game out of reach.
Taylor finished with four tallies in her final school game to end a storied high school career in which she recorded 173 goals, 79 assists and 328 draw controls despite missing her sophomore season in 2020 due to Covid-19 pandemic.
“She is the best lacrosse player I have ever coached and the best athlete I have ever encountered,” said Rooney of the senior midfielder, who will play at Northwestern next season “She is not replaceable so going into next season without her is a different world.”
The Warriors will return nine starters next season including Ingrilli and Alaimo, the second-leading scorer and a North Carolina commit. Rooney said the four graduating seniors in Taylor, Erin Whitakker, Olivia Brodarick, and Angela Camaran have left beside a winning foundation that will be carried forward next spring.