When hard work is a science 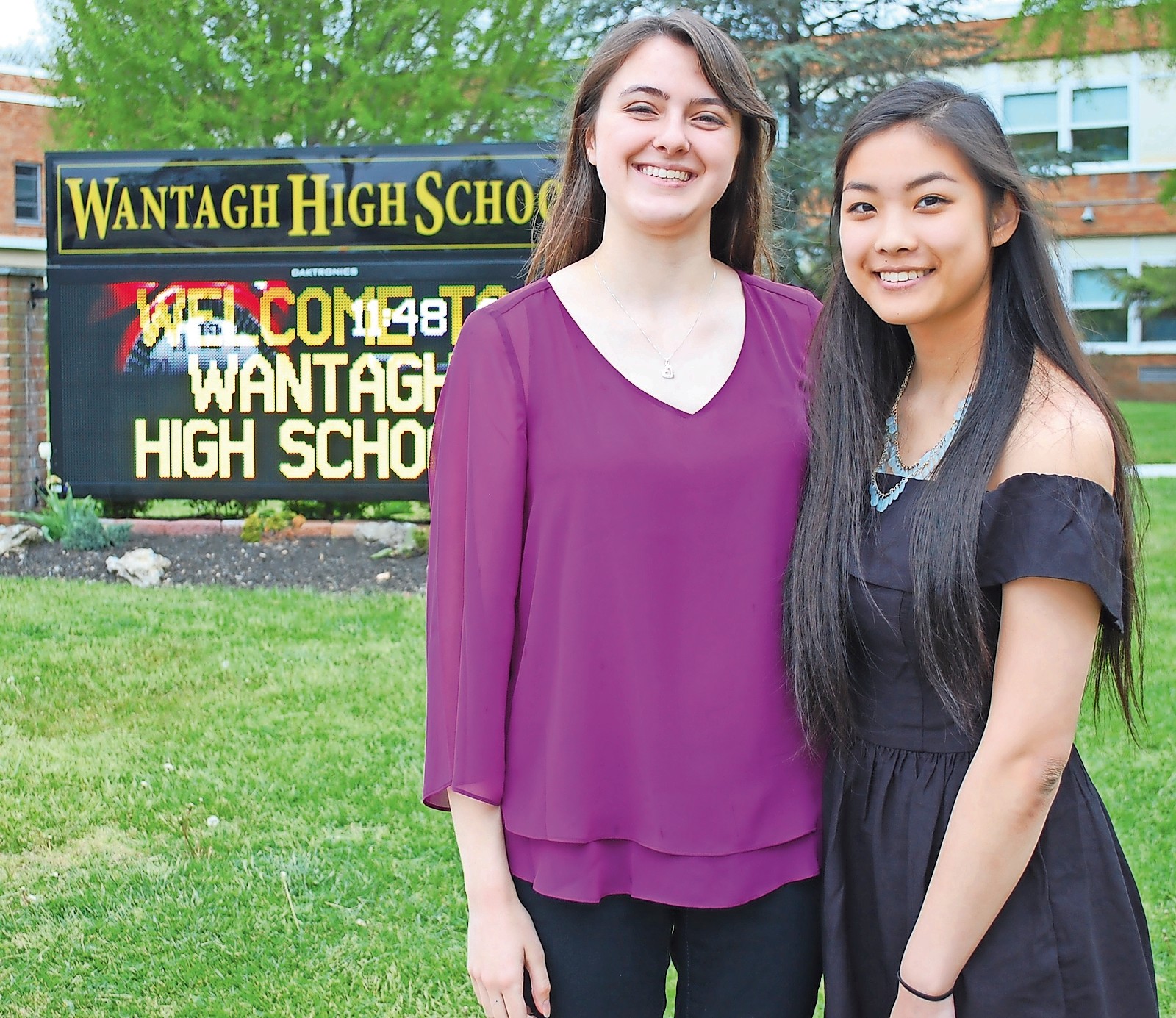 Lauren Bednor, left, and Sophia Liu are the valedictorian and salutatorian of Wantagh High School’s class of 2016.
Andrew Hackmack/Herald
About the graduates

In a week, Lauren Bednor and Sophia Liu will stand up in front of their 270 fellow classmates and deliver a few words that they hope will resonate with them for the rest of their lives.

Bednor, 18, is the valedictorian of Wantagh High School’s class of 2016, and Liu is the salutatorian. Less than a point separated the two students, who admitted that the competition was tough for the two spots that come with graduation speeches. Those remarks will be made at an evening ceremony on June 23 at Nassau Community College, the first time it has been held outside of Wantagh.

In late October, Bednor got a letter in the mail. Knowing it probably contained her high school ranking, she waited for her parents to come home. “Then when I opened it,” she said, “I couldn’t believe it. I just started smiling. I’m just a hard worker in general, and I want to do the best I can, and this happened as a result.”

Liu, 18, also received a letter, and wasn’t sure what it was. “My mom read it and she started crying,” Liu said. “She was happier than I was.”

Bednor will take her talents to Stony Brook University’s Honors College, where she will major in biology. She would like to do genetic research, and said she chose the school for a combination of its academic reputation and the scholarships she received.

She added that she is excited for the chance to be on her own for the first time, yet still be close enough where she can come home.

Liu will attend Barnard College in New York City, where she will study biology on a pre-medicine track. In the future, she wants to become a doctor and is leaning toward cardiology. She said she selected Barnard because it is close to home and is a small school which offers personal attention.

“College definitely has a wider scope of people,” Liu said about what she is looking forward to about the change. “It will be interesting meeting them.”

Making the most of high school

Finishing at the top of their class meant a lot of challenging courses and extra hours in school. Bednor took nine Advanced Placement courses, and said biology and chemistry were among her favorites. “I’ve always liked to find out why and how things work,” she said about her interest in the sciences. “The A.P. courses have really prepared me for college. It’s challenging, but it’s definitely rewarding.”

That interest went beyond the nine periods of her school day, as she participated in Science Olympiad, garnering a third-place award at the state level. She was also part of the Rube Goldberg club, which built complicated machines that had to perform simple tasks, and her team placed third at the regional level. Bednor was also vice president of the Science Honor Society.

Last summer, she took a course that allowed her to spend two weeks at Cold Spring Harbor Laboratory, where she studied bacteria and sequenced DNA. She is a long-time Girl Scout and has done several community service projects including making Christmas ornaments for troops overseas and cookies for hospitalized veterans.

“They definitely have something for everyone,” Liu said about the course and extracurricular offerings at Wantagh High School.

Liu has volunteered at the intergenerational dinner, an annual event that welcomes seniors from the community to the high school for dinner and a show. With student government, she has also participated in food drives and spirit week. Three summers ago, she spent two weeks in China teaching English to children.

The girls both got their starts at Wantagh Elementary School, and first had class together in fourth grade, when they became good friends. They also both play the violin.

Principal Carolyn Breivogel said while each girl has her own strengths, they are both poised, hardworking and humble individuals who have been involved in so many facets of life in Wantagh.

“Together, they represent a powerful combination of brilliance in academics, involvement in extracurriculars and giving to the community,” she said. “We could not have been more proud to have these two young ladies represent Wantagh High School as the academic leaders of their class.”