Historical society uses devices to peer into past 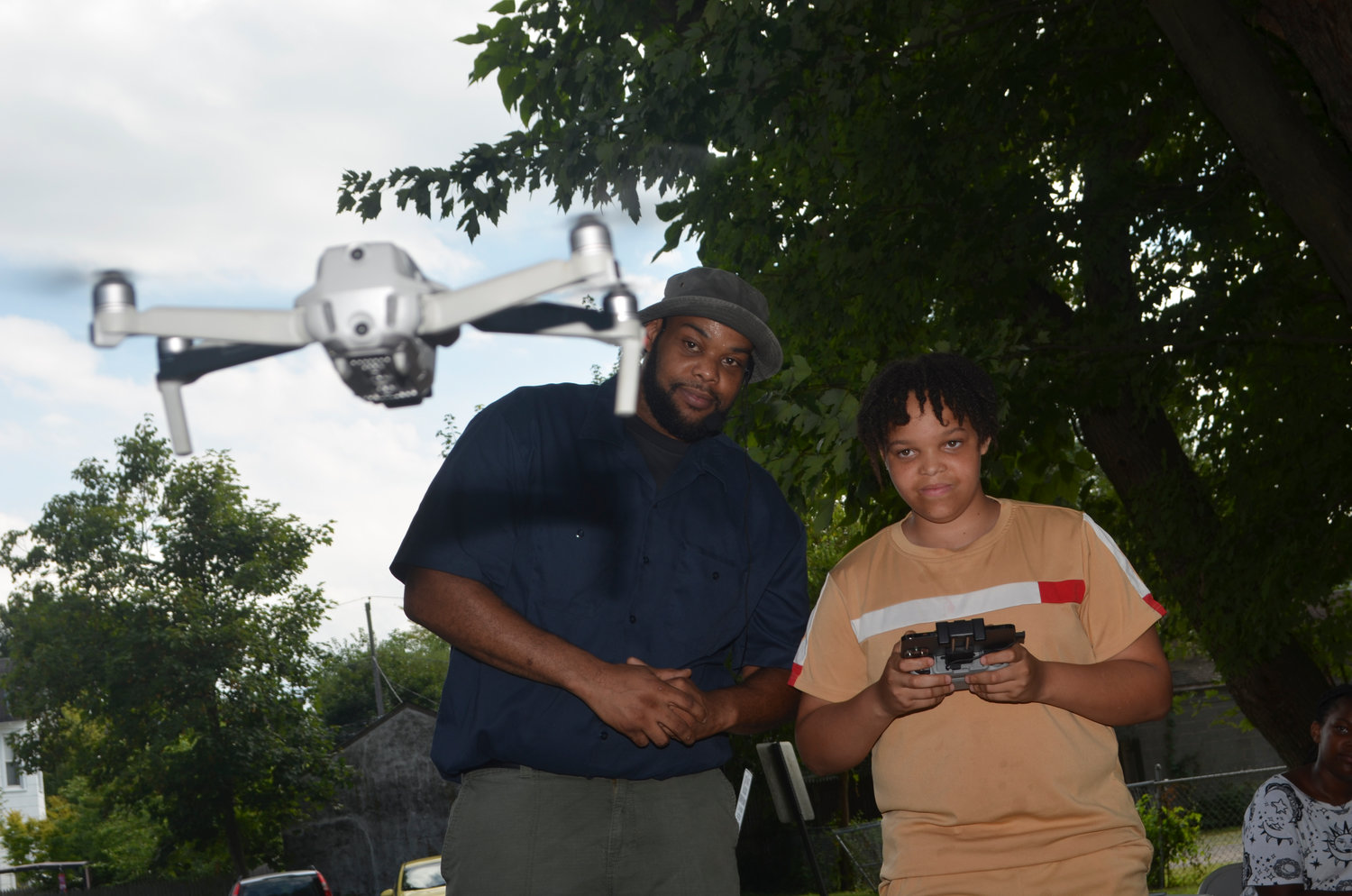 Antoine McLean teaches kids in the program — including his son, Antoine Jr. — how to handle and operate drones safely.
Tim Baker/Herald 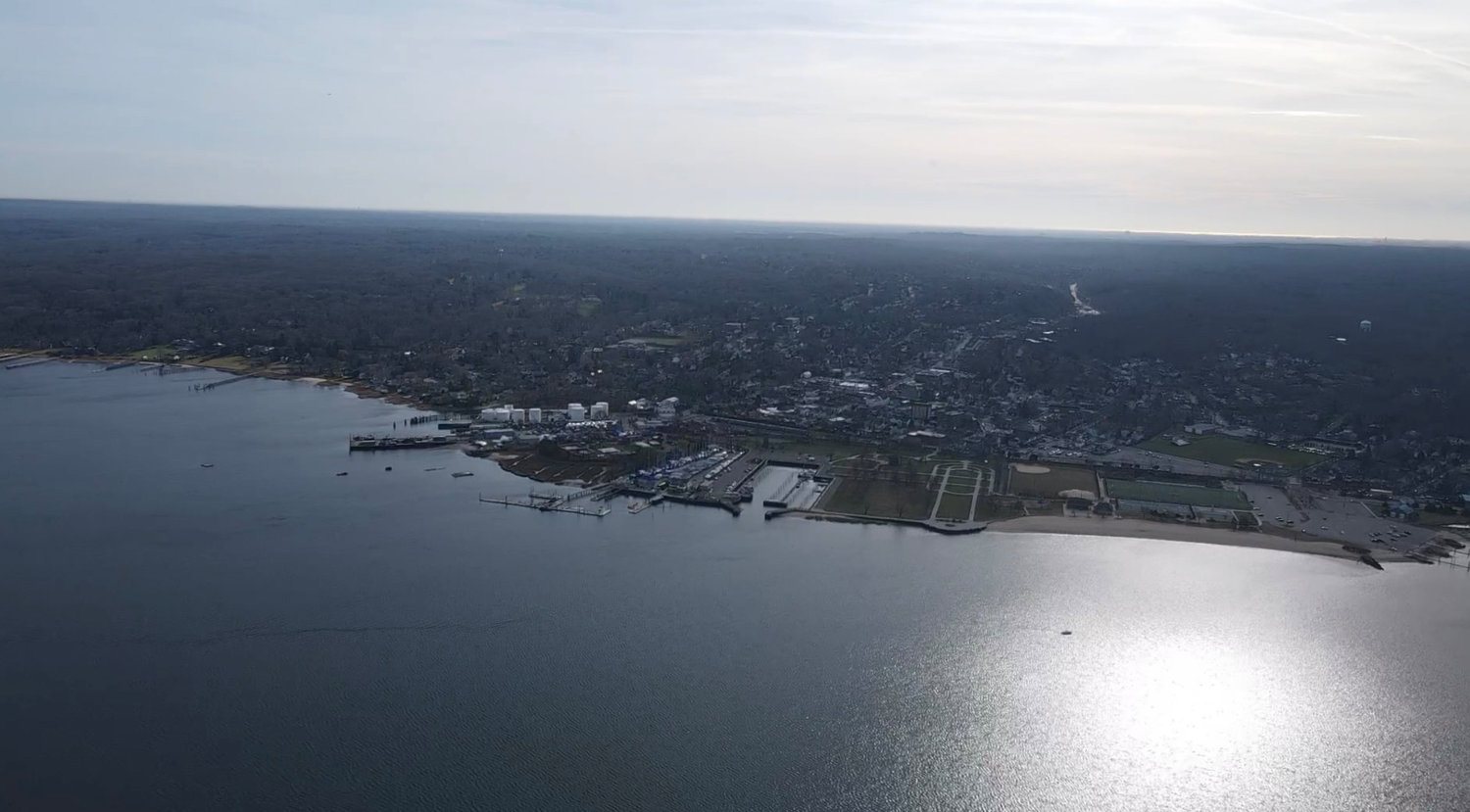 Drones can take high-quality aerial shots, such as this one of Oyster Bay Harbor.
Courtesy Antoine McLean
Previous Next
More on drones

Drones were first developed in the 1980s by the U.S. military, and the first armed devices were made to help track down Osama bin Laden.

Drones are used for everything from surveillance to movies, and even for farming: Farmers use them to survey their crops quickly and efficiently.

They have been used by humanitarian groups to deliver food and medicine to remote areas.

There are drones as small as insects, which are used to search for victims of natural disasters and other catastrophic events.

Oyster Bay residents will soon be noticing something new in the sky over the coming weeks. Drones are giving children an opportunity to learn about both a new technology and the history of the hamlet.
The Oyster Bay Historical Society, whose headquarters are in the Earle Wightman House, at 20 Summit St., has teamed up with Antoine McLean, an actor, producer and drone enthusiast from Freeport, to teach kids ages 8 to 18 how to use drones to learn more about their community. The society, a nonprofit, was founded in 1960 to preserve Oyster Bay’s history, and has over 16,000 photos, documents, ledgers and articles of clothing.
According to Denice Sheppard, the organization’s director since 2017, the drone project originated when she saw some of McLean’s work. “I saw it as a way to introduce and encourage younger people to learn more about the history of Oyster Bay,” Sheppard explained. “I was thinking of how to engage kids, how to reach them, and I thought that this is something new that certain kids might be interested in.”
The program has two parts. First, children will learn how to safely operate drones, as they are introduced to the technology and taught to use it responsibly. Second, they will use the devices to take photos of historical buildings around town, such as Sagamore Hill and Snouder’s Drug Store, with each participant choosing a building and doing a presentation on it at the end of the program.
According to McLean, who has worked with drones professionally for the past 10 years, learning how to operate them has had a profound impact on his life and work, and it’s something he’s passionate to pass on to the next generation.


“I’ve been flying drones for a decade now. It’s changed my business, it’s changed my life, and all I want to do is do that for young kids,” McLean said. “You know, they use drones in cinema, in search-and-rescue, the LIRR and the military both use them. There is such a huge market for these things, and I want to give these kids a chance to get involved right now.”
While flying drones can be both fun and educational, safety is always the paramount concern for McLean. Ten children began the course on Aug. 3, and the entire first class focused on operating drones respectfully and purposefully, and most important, learning what not to do — flying them higher than 400 feet, for example, where they can pose a risk to helicopters and other low-flying aircraft, and flying them directly over people.
The classes will take place at the Historical Society every Wednesday and Thursday, from 3 to 6 p.m., until Sept. 8. While some of the kids are more interested in the drones than the history, and for some it’s the other way around, all mentioned how exciting it has been to learn how to use the drones and to get to see Oyster Bay from a new perspective.
Kenneth Cruz, a 13-year-old from Freeport, mentioned how he knew a little about drones beforehand, but was really excited about actually flying them himself. “I knew that they use them a lot for studying the environment, (and) they use them in movies to record towns and get different shots,” Kenneth said. “I’m a beginner. I don’t know much about drones, but I’m learning more about what they use them for, how they’re used, how they’re made, and what I can use them for in my future.”
There are still spots available in the program for those who want to sign up their kids. Anyone interested in learning more can contact the Historical Society at (516) 922-5032.
Report an inappropriate comment