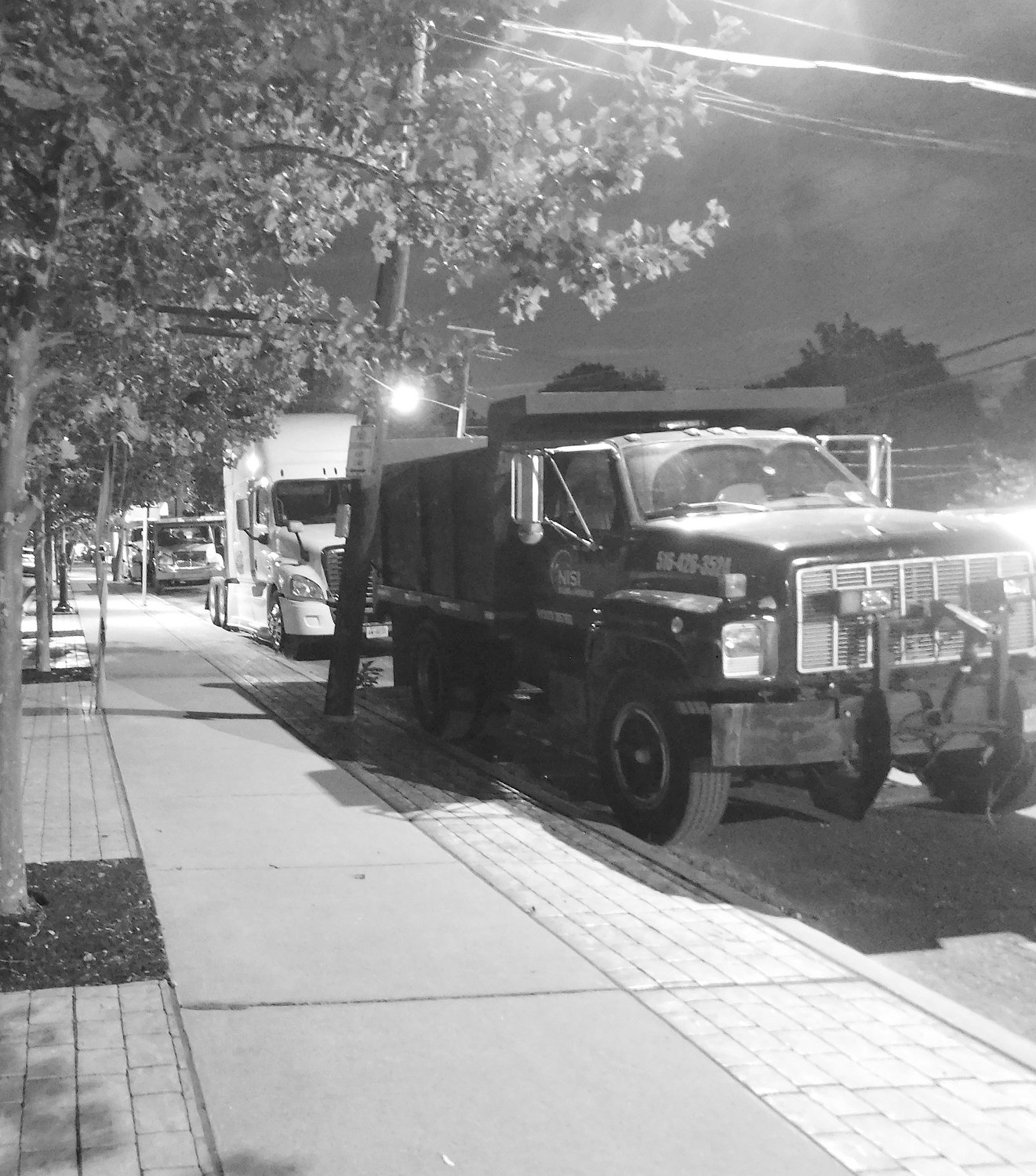 Trucks have been crowding the parking lane on Front Street along Marginal Road nightly.
Reine Bethany/Herald

I have been losing sleep at night as trucks that come to park there after midnight make loud noises”
Mahmud Chowdhury, Uniondale resident
By Reine Bethany

Elton E. McCabe, Jr., and his neighbors are determined to end the noise and visual impediment created by trucks and buses parked along Marginal Road in Uniondale.

“Last night at 10 p.m.,” said McCabe, “I went out and argued with a truck driver who parked and loudly idled his engine for 45 minutes. People couldn’t sleep.”

McCabe is a neighborhood activist who is running this fall against Kevan Abrahams for the position of Nassau County Legislator, District 1. He lives on Pemaco Lane, which curves briefly south from Marginal Road and hooks east parallel to Marginal Road and Front Street.

Marginal Road and the slim median that separates it from Front Street provide a buffer between Pemaco Lane and the constant traffic along Front Street, which is State Route 102. But the buffer gets misused by outsized vehicles that park along the median.

“Drivers can’t see around the trucks to turn onto Front Street,” said McCabe.

“The situation seems to be getting worse day by day as more and more of these huge trucks continue to park there, some for weeks in a row,” Chowdhury said in an email

Once, Chowdhury said, when turning left onto Front Street, he almost collided with a car from the right whose approach was visually blocked by the trucks. On a different day, he nearly hit a bicyclist who was riding on the wrong side of the street and appeared suddenly around a stationary truck. .

“I have been losing sleep at night as trucks that come to park there after midnight make loud noises,” added Chowdhury.

McCabe said that school bus drivers also fill the parking lane at midday, between their morning and afternoon shifts. McCabe called the bus dispatching company and got some cooperation, but before long, buses from other companies replaced the prior ones.

“I sent a letter to the [New York State Department of Transportation, Region 10], in Hauppauge,” said McCabe, ”trying to get to the bottom of who’s responsible for regulating state roads.” No help has been forthcoming from the DOT.

McCabe, with participation from the Nostrand Gardens Civic Association, has addressed several problems since the median that created Marginal Road was added. New York State installed the median and planted a pleasing row of trees along it, but put in no streetlights.

“It was pitch dark unless cars happened to pass by,” said McCabe. Not until Senior Councilwoman Dorothy Goosby got involved were streetlights at last installed.

During the hours when big vehicles weren’t filling the parking lane, people would park passenger cars there, dart across Front Street to buy a meal from 7-Eleven, and then return to their cars to eat while dropping used bags, napkins, and cups.

“Every weekend I was blowing away 7-Eleven trash,” said McCabe. “It didn’t stop until the 7-Eleven was replaced by Front Street Farmer’s Market.” The Town of Hempstead also began better maintenance of the area. It is now brightly lit and relatively trash-free.

“The trucks are the last hurdle,” said McCabe.