Isles fans raise the roof on their new 'Barn' 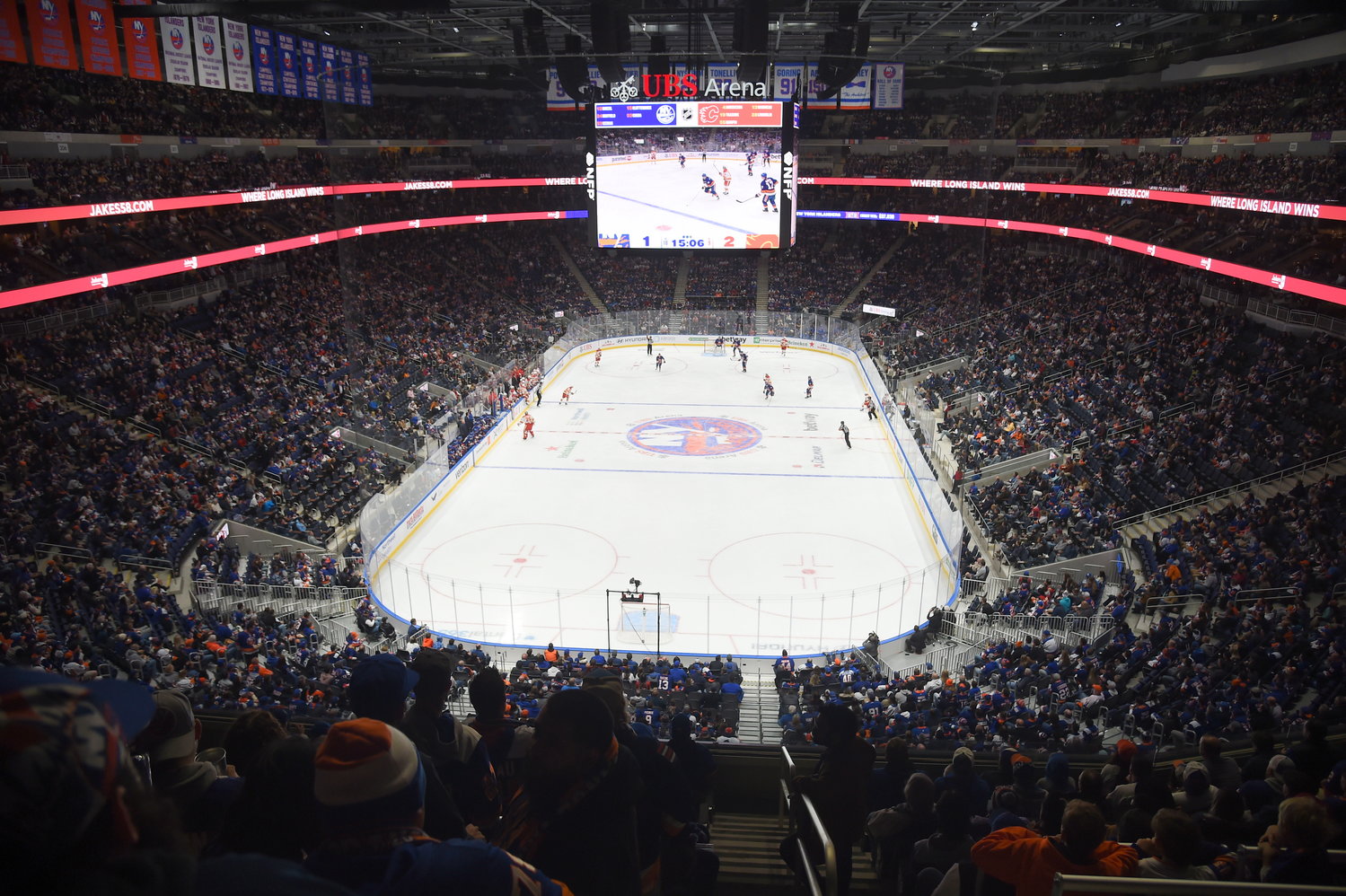 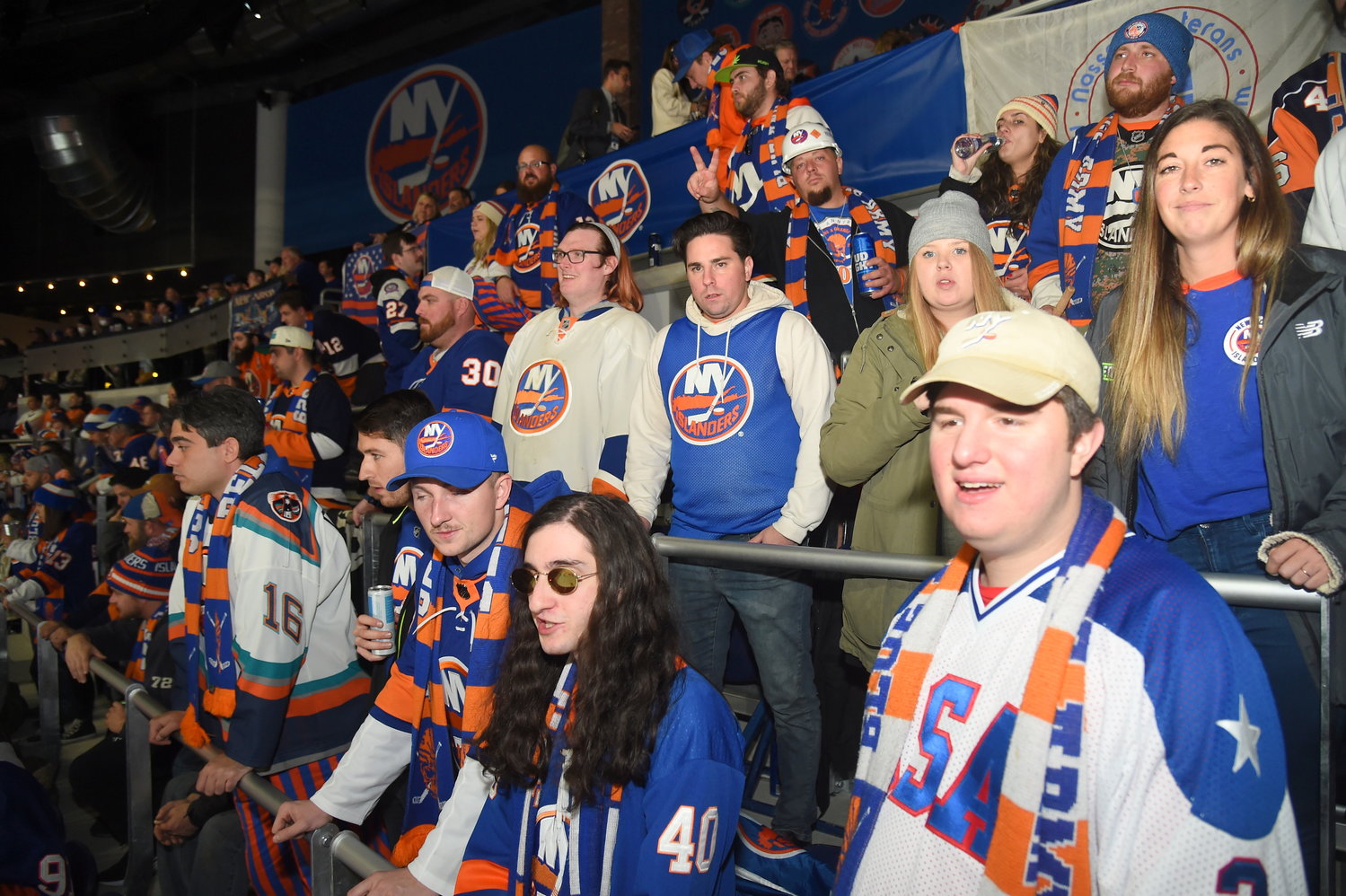 The Blue and Orange Army in Section 329 brought soccer-style chanting throughout the game.
Donovan Berthoud/Herald 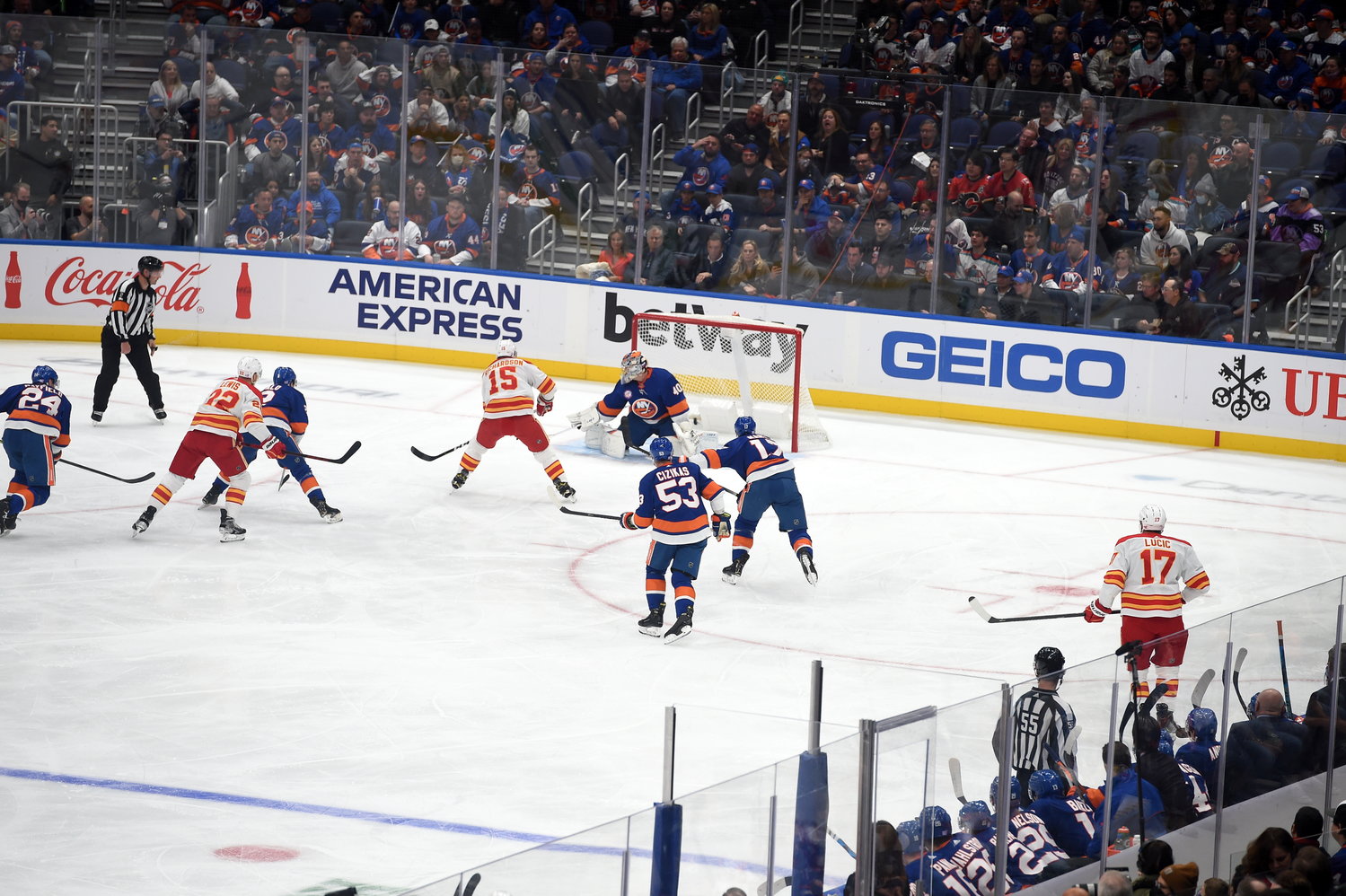 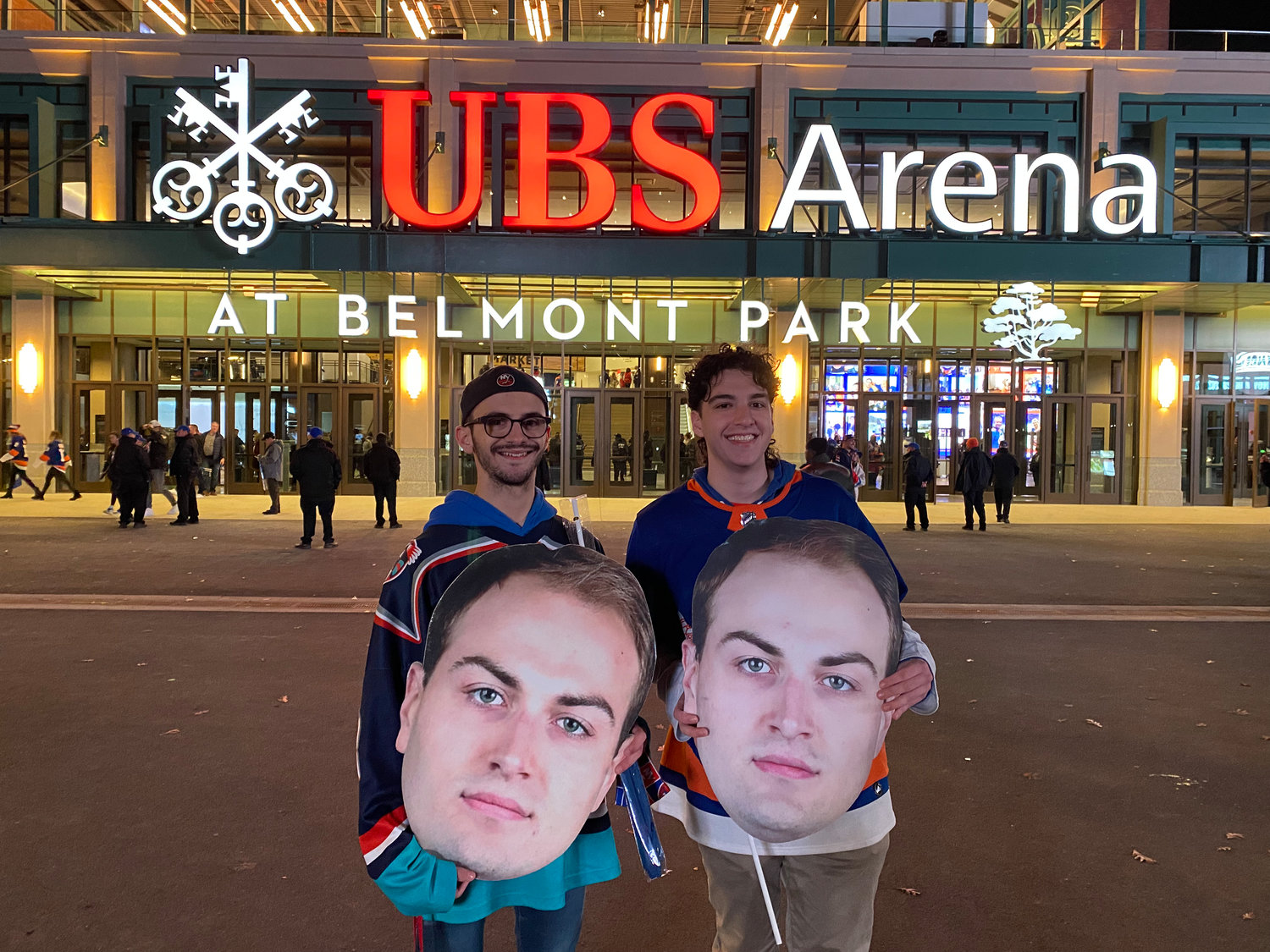 Nicholas Constantinidis and Jake Basile of the “Pelech Posse” with cutouts of their favorite Islanders defenseman, Adam Pelech.
Tom Carrozza/Herald 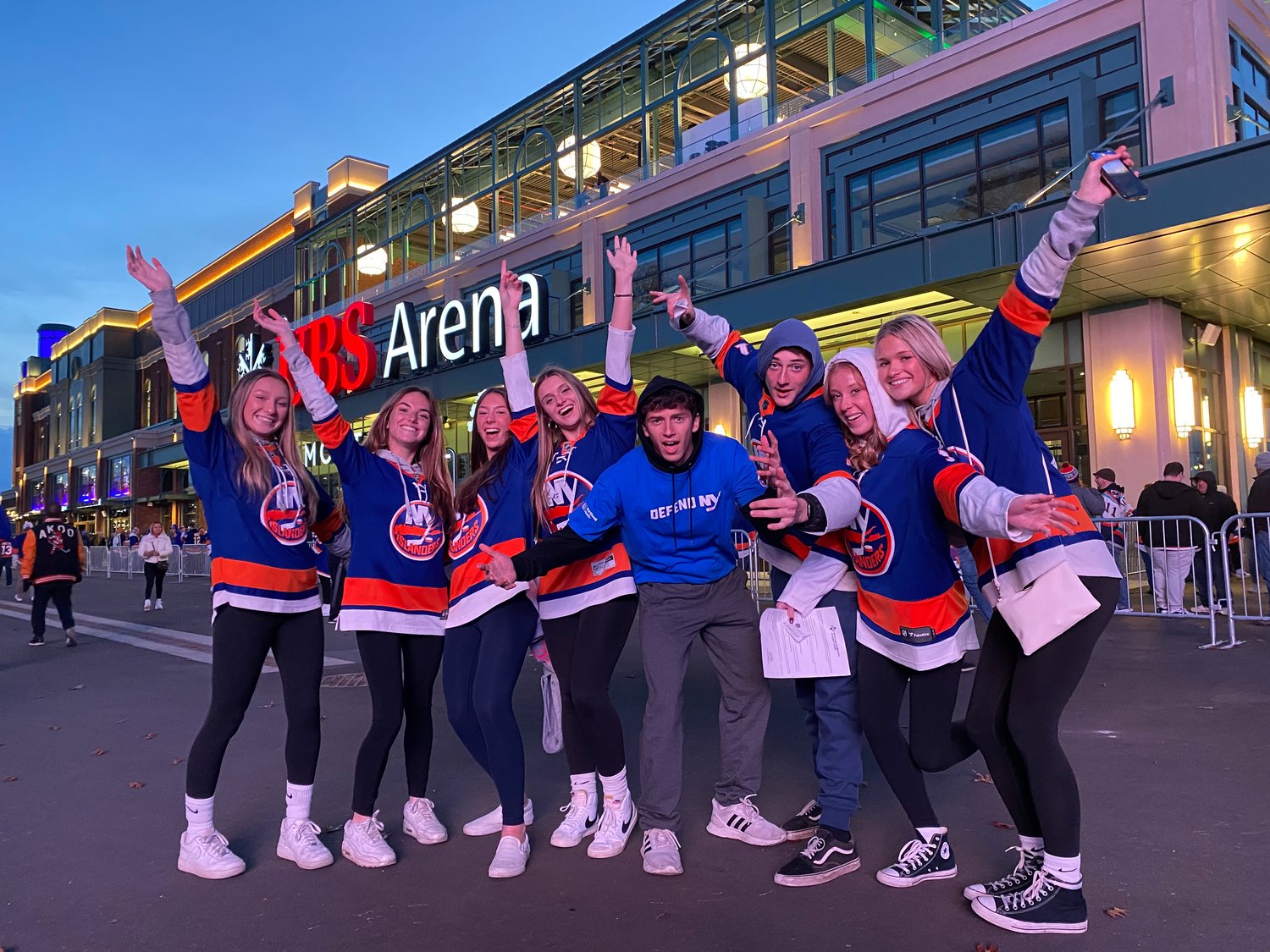 Isles fans got pumped up before entering UBS Arena for the first time.
Tom Carrozza/Herald
Previous Next

Islanders fans from across Long Island made the pilgrimage on Saturday to the team’s new home at UBS Arena in Elmont. Despite a disappointing game result — the Islanders lost to the Calgary Flames 5-2 — fans were elated to finally have a home for their favorite hockey team after years of uncertainty, recreating the exuberant cheering that so defined games at Nassau Coliseum, known affectionately as “The Barn.”

The $1.1 billion arena at Belmont Park already means a great deal to fans who have watched the team through years when the Nassau Coliseum fell into disrepair and the Barclays Center in Brooklyn offered obstructed seating. The fanbase survived rumors of the team’s move to Quebec City or Kansas City in the 1990s and 2000s and has finally been rewarded with an arena that pays homage to both them and the players of yesteryear.

“I’m 26 years old, and I’ve been waiting my entire life to see this building open,” Steven Ferraro, of Rockville Centre, said. “It was the Lighthouse and then whatever after, but the [new] building [is] absolutely fantastic, just gorgeous.” Ferraro said his favorite aspect of the structure so far is the Heineken Terrace above the main entrance, saying it’s unusual to have club-like atmosphere at a hockey game.

The late John Kempf was remembered at the game by his wife and son, Christine and Sean Kempf, who carried around a cardboard cutout of him. A detective in the Suffolk County Police Department, John died in April 2020 after a battle with Creutzfeldt-Jakob Disease — a rare degenerative brain disorder. During his tough fight, Kempf got to speak to his all-time favorite Islander, John Tonnelli, on the phone.

“It means everything to be here,” Sean Kempf said. “[My father] was a lifelong fan, and he passed that down to us.” Sean also said that his father was a huge fan of both Zach Parise and Zdeno Chara and would have been blown away if he had seen them both acquired by the Islanders in the off-season.

Mark Martinez, of Levittown, said he became an Islanders fan along with his school friends when the team visited Summit Lane Elementary School when they were children. “When we were little, tickets were cheap and we would go to every game, and now we still go to every game. It’s a part of our friendship now,” Martinez said.

In the upper deck, signs with the logos of Islanders fan meetup groups from San Diego to the United Kingdom were placed above the raucous Section 329 crowd. The section, carried over from the Coliseum, serenades the team with soccer-style chants and drum playing throughout the game.

The much-touted low roof of the building traps the noise, giving amazing moments like when the crowd sang along with Nicole Raviv during the national anthem. There were glimpses of what the atmosphere can be like when the team gets going, like when Richard Panik laid the first big hit or when the referees announced Brock Nelson’s first goal.

Superfans Jake Basile and Nicholas Constantinidis, from Plainview, came to the game carrying cardboard cutouts of Islanders defenseman Adam Pelech’s face. The two started the “Pelech Posse” a few years ago, now even selling merchandise to the over 8,000 followers of their Instagram page, “Bathtubjake.”

“A lot of guys from the Barn days were kind of concerned about this not being home, but it really felt like it tonight,” Basile said. “This is genuinely a dream come true. It’s so surreal. The atmosphere was great. Not the result we wanted from the game, but the arena was absolutely amazing,” Constantinidis said. “It felt like this is ours, this is our amazing, 21st-century arena. We finally joined the club.”

Co-owner Jon Ledecky, who purchased the team with business partner Scott Malkin in 2016, spoke to and took pictures with fans outside the arena before the game.

“You can hear the fans are so excited and they’re saying, ‘Thank you,’ which is great, but we’re saying it back, because without them and their support, this building doesn’t happen,” Ledecky said.