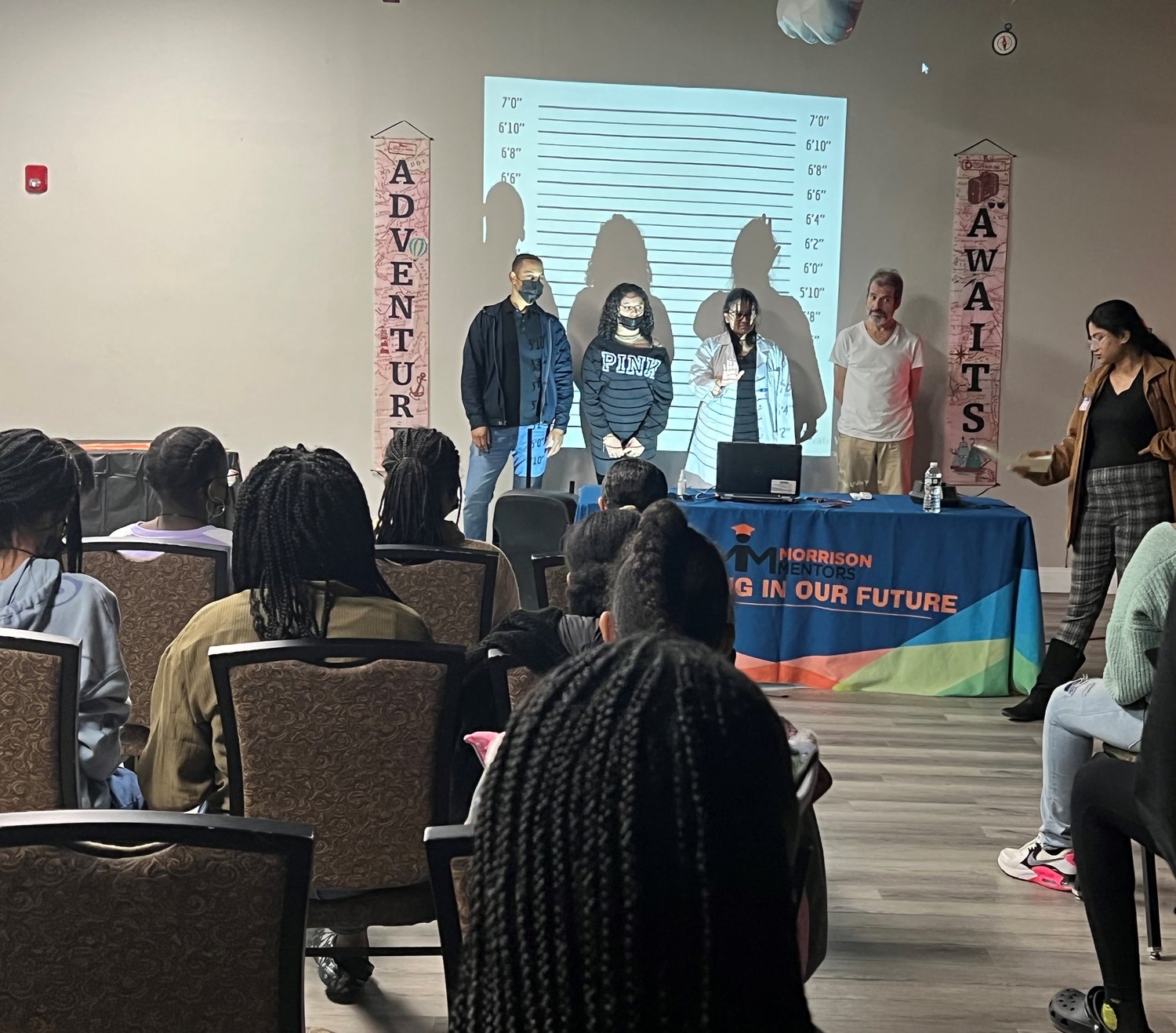 At the end of the Morrison Mentors Murder Mystery Event, the “suspects” lined up while the attending students guessed which one “murdered” Professor Bloom in the research lab.
Reine Bethany/Herald 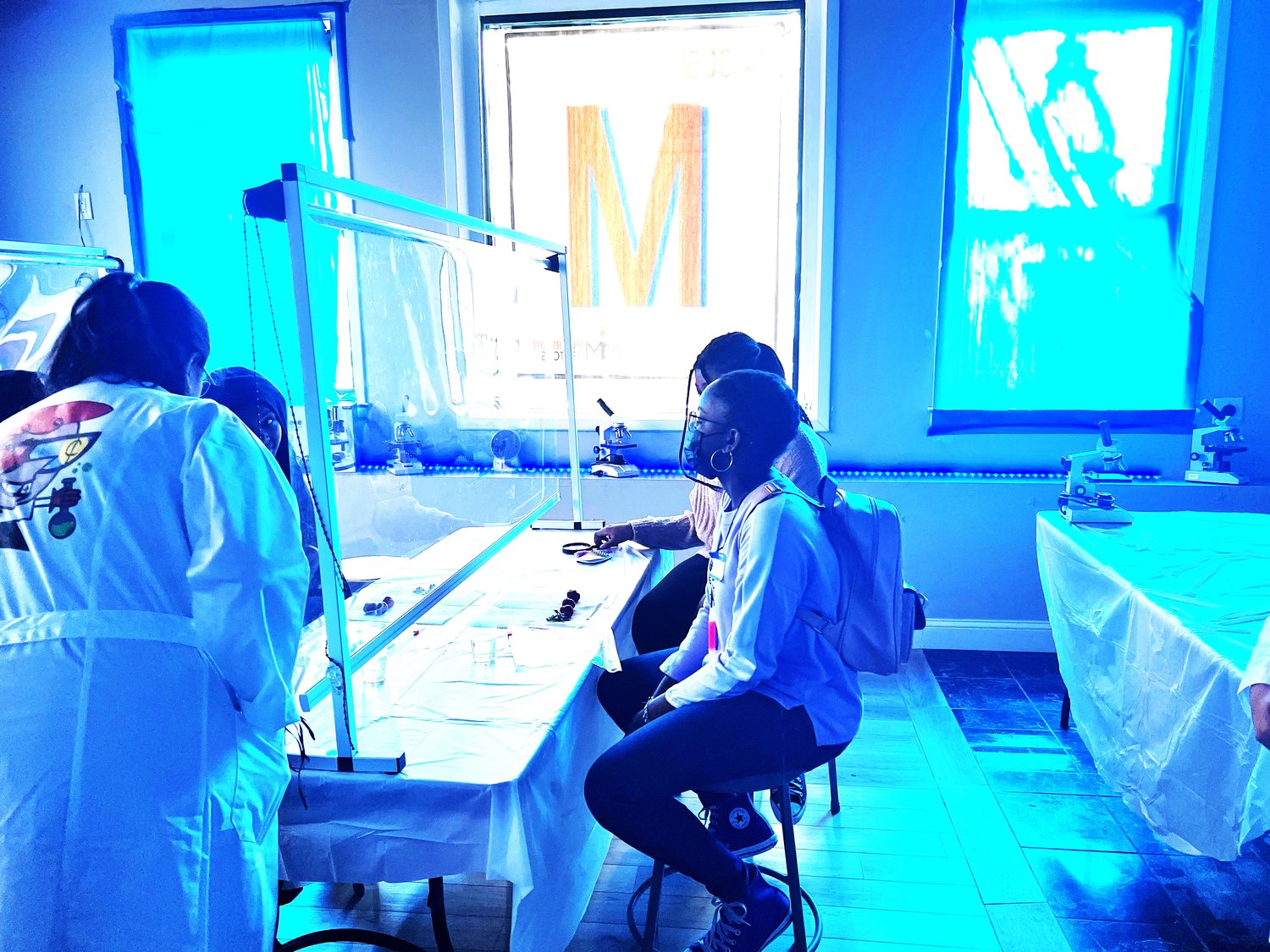 Last Saturday on the second floor of 352 Fulton Avenue in the middle of Hempstead, 25 middle-school girls stared at slides, analyzed footprints, assessed witness statements, and applied binary code to clues.

It was all part of the Morrison Mentors Murder Mystery Event.

Teen, college, and adult volunteers—several from Stony Brook University—guided the girls from the murder room where the imaginary Professor Bloom had met her untimely end, to the coding room, to the DNA lab, and to a classroom where the suspects each defended their reasons for being at the scene. Shouts of laughter punctuated the discussions and lessons.

By the time the students assembled in the large multipurpose room to learn who-done-it, they had been introduced to actual forensic techniques used in crime-solving by real-life detectives.

They also had a fabulous time together.

“The mentors make this interesting to engage kids,” said London Marable, age 11, a student at Philippa Schuyler Intermediate School 383 in Brooklyn who attended the event. “Maybe if I want to become a CSI, I can use these tips to identify the killer more easily.”

Volunteer mentor Kimora Turenne, 18, a senior at Baldwin High School who will attend Binghamton University’s engineering program next year, enthused about the 15 hours a week she spends with Morrison Mentors, tutoring at two local schools, helping run Saturday events at the MM headquarters, and being mentored herself by the MM team.

“I enjoy science, I enjoy mechanics, I enjoy technology,” she said. “We’re doing binary code in there. I can see the kids having fun with it.”

The Murder Mystery Event was mounted specifically for middle-school girls, and represented just one facet of the comprehensive organization founded by Doron Spleen in 2012.

“The organization is named after Arthur Morrison,” Spleen said. “He was my mentor and tutor. Back in 2010 I told him I wanted to start a nonprofit so that we can scale the work that he does, get colleges involved, have more people assisting with homework and enrichment after school and on Saturdays.”

Arthur Morrison, who died in Sept. 2020, graduated from Hempstead High in the mid-1960s. After earning postgraduate degrees in mathematics and Spanish, he became a renowned Hempstead High School teacher, basketball coach, and daily tutor at Hempstead’s Kennedy Park.

Doron Spleen started Morrison Mentors in 2012, with Morrison’s help, using rooms at Kennedy Park and at the Percy Jackson Youth Center on Greenwich Street. The program grew, came under the umbrella of My Brother’s Keeper, and in early 2020, took over the empty loft space at 352 Fulton Avenue.

Kids attend from Hempstead, Baldwin, Uniondale, Freeport, Roosevelt, and New York City. During school hours, students who have been suspended, or even put on probation, come to learn basic technology, and then become part of the MM mobile outreach, taking their knowledge as far east as Shoreham, under the supervision of the Morrison team.

A recently joined member of the MM team is village photographer Shamel Harris.

“I teach technology and photography,” said Harris. He grew up in Hempstead, attended Roosevelt schools, and achieved certification in health technology through a Northwell Health program. One of the first classes he led for MM was a computer-building program for high schoolers in Long Beach. The students were at first reticent, he said, but, “they became more confident because they were doing it themselves. We’re instructing them, teaching them, they’re learning the components. It was wonderful.”

Bradley Chery, a Baldwin resident and a Morrison Mentor, is a computer expert in a Hempstead firm.

“I teach programming and how to design websites,” he said. He encourages his students to offer to design free websites for local businesses, thereby building their resumes while they continue their training. “I teach them that the skills you learn, you use to make money,” he added.

Executive Advisor Sherika Adams does staff training and donor relations, among her many duties with MM. She has been with the organization for over two years, developing relationships with colleges and related organizations while onboarding and organizing staff.

“This is our team,” she said, “and I plan to help build and expand this team.”

“This is the Boys and Girls Club of STEAM,” said Spleen, smiling at the focused, enthusiastic crowd.