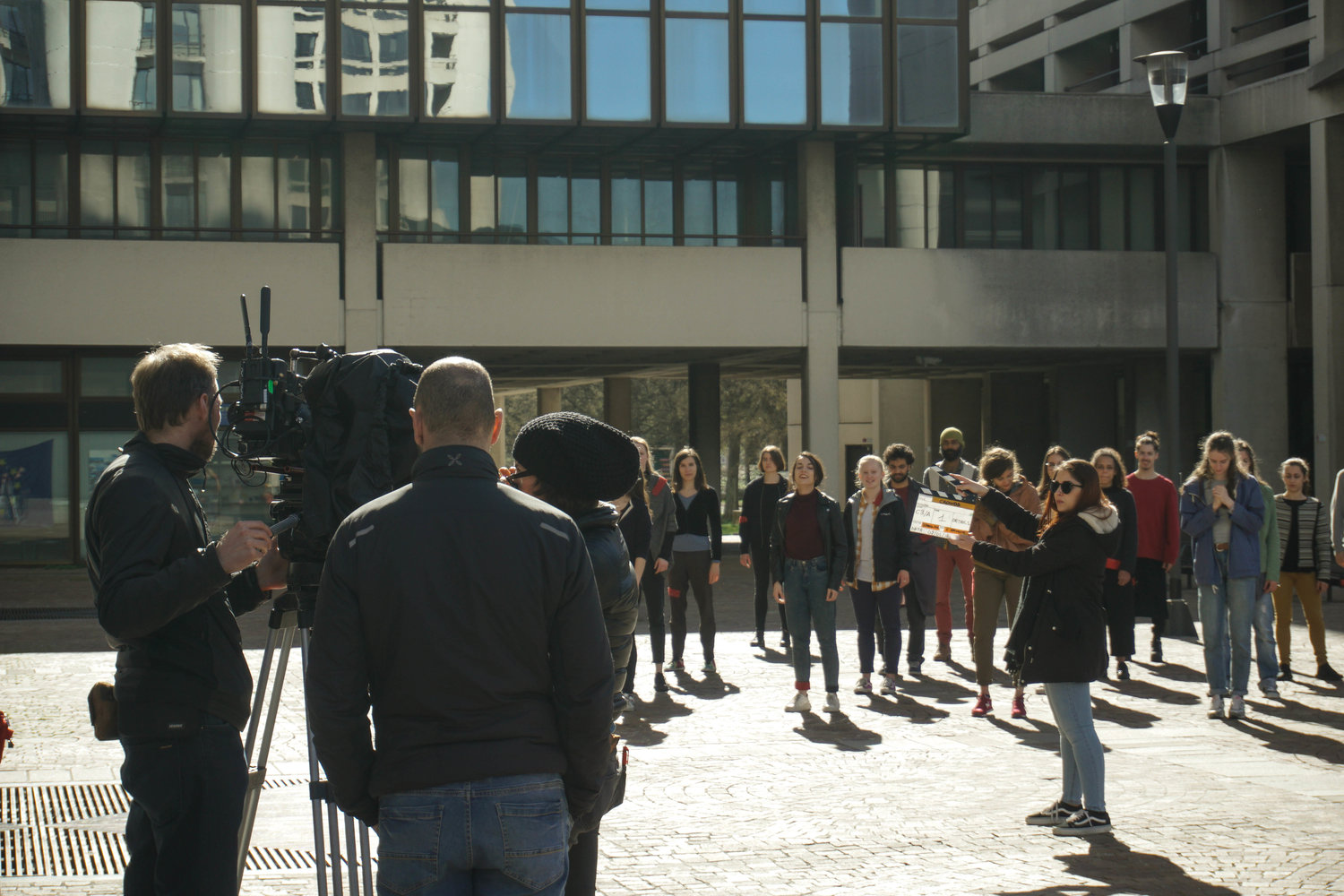 Sarah Friedland on set with a crew of professional and non-professional performers.
Courtesy Zakir Sheraan

I’m really interested in the very idea that when you move together, you’ll be a better team.”
Sarah Friedland, independent filmmaker
By Juan Lasso

Sarah Friedland, an independent Brooklyn-based filmmaker, has set her sights on transforming the Valley Stream’s Village Green into the central shooting location for her latest film project: “Trust Exercises.” Friedland’s short experimental films provide a curious lens into what she describes as the “choreography of our everyday life,” peeling back the layers of how even our most mundane movements reveal insights about the culture and character of our sociopolitical lives.
“Trust Exercises” will be the final installment of her trilogy on movement exercises, focusing, as the name implies, on the physical patterns and choreographies of trust and team-building exercises practiced across modern offices, group retreats and other congregations.
“I’m really interested in the very idea that when you move together, you’ll be a better team, you’ll be able to resolve conflict, be more efficient, etc. And that same movement exercises that could be used to help students get to know each other can be used by a multinational corporation to be more efficient,” Friedland said.
Friedland, alongside her lean production crew, are looking to enlist local community members to perform in the film as fictional office workers on a fictional office retreat occurring in the Village Green, where they will be led through a series of outside team-building and trust exercises. A stark feature of her films is the candid, unscripted movement, and the physical knowledge of the space that locals bring to the performance. She said she hopes Valley Stream residents will enter a familiar community space with a new sense of playful intimacy and discovery, letting their bodily inclinations show.
Friedland spoke with the Herald to talk about her new film. The conversation has been edited and condensed.

Herald: Why did you choose the Village Green as the location for your film?

Friedland: It was actually serendipitous that I came across Valley Stream. I had been looking for a smaller community outside of Manhattan and Brooklyn—a town with a central square or a central gathering space, and I stumbled upon the Valley Stream Village Green on Google maps on satellite view, and I was just really drawn to the architecture of the bandshell and the way in which the community has its civic buildings: the library, town hall and courtroom, surrounding it. I was interested in the communal architecture of that public space, and so I reached out to the village and found them to be incredibly welcoming and wonderfully supportive of art making and filmmaking. And now, I’m really excited to reach out to local community members to be part of the film.

Herald: Can you tell us about what goes into the filmmaking process?

Friedland: In terms of the filmmaking process, so much happens in the research prior to filming. I usually spend at least a year doing what I call ‘embodied interviewing,’ where I ask people to describe and physically animate for me different physical experiences that are related to the line of inquiry for one of these films. For this film, I spent a lot of time interviewing people about their own experiences in trust exercises, including what it felt like, what movements did they remember, did it work in bringing them together, etc.

Herald: What type of film production should locals expect to participate in?

Friedland: For the past five years, we’ve ended up working with a micro-budget, which means working with a much smaller crew. But I actually really love the size of the crew from a creative standpoint because there isn’t so much of the pressure to work with a traditional large film set where everything has to happen in a very rigid, efficient and timed way. There’s a little bit of room to bring in non-professional performers and have more of a creative exchange. It feels more like a workshop or dance rehearsal on set where things continue to shift as we work. We are really nimble to allow room for creativity and spontaneity on the day of the shooting.
Shooting for the film will take place Oct. 13. No prior performance experience necessary, and all ages welcome. Proof of vaccination is required. Compensation is $180 per day. All interested individuals should email a short video introduction with your name and a brief introduction about who you are and why you are interested in performing in the film to motionandpictures@gmail.com. More info on the filmmaking team can be found at www.motionandpictures.com.