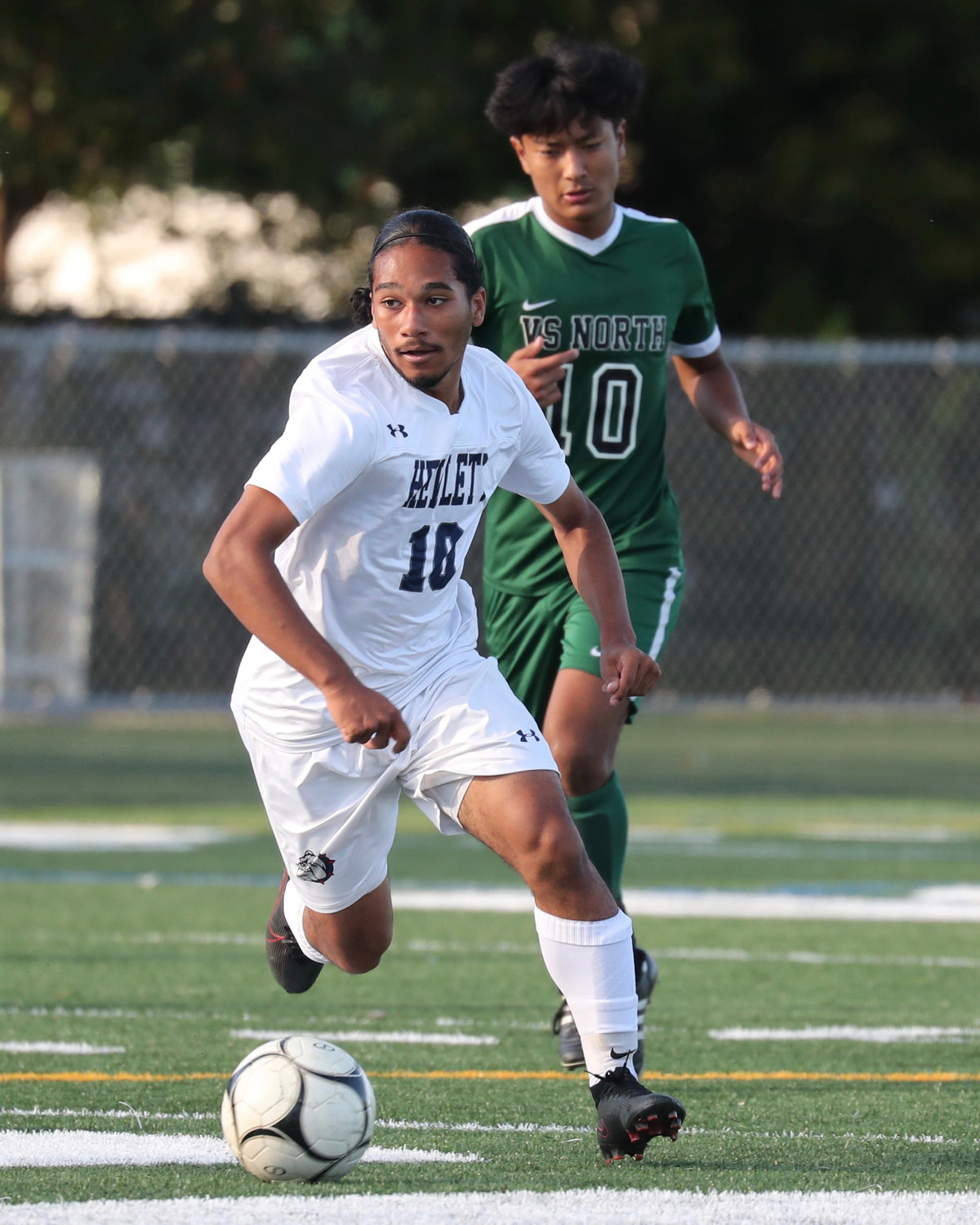 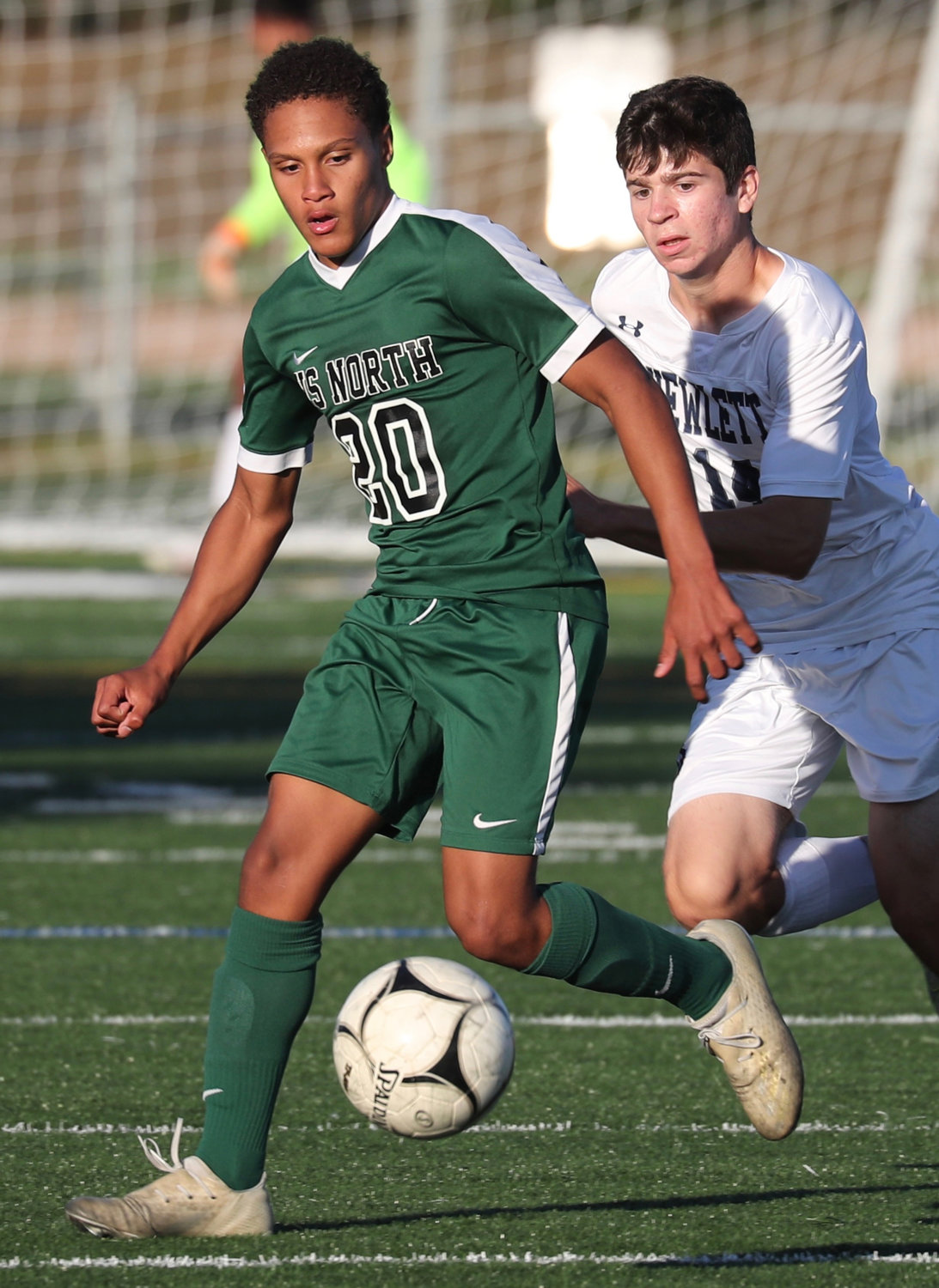 Valley Stream North's Nickolas Pagan, left, moved the ball upfield with Hewlett's Ian Panzarella on his heels during the Spartans' 3-1 defeat at home.
Jeff Wilson/Herald
Previous Next
By Jamie deJong

Hewlett’s boys’ soccer team needed some semblance of momentum or positive traction going into last Friday’s match on the road against Valley Stream North.
Entering the match with a losing record, some shift or alteration was needed in order to salvage the season. One pivotal tweak to the starting lineup was a central catalyst in ensuring the Bulldogs’ 3-1 victory.
“Our record was 1-4-1,” Hewlett coach Nick Lacetera said following the game. “It was time to shake things up a little bit. Right now, it looked like it worked.”
The shaking things up referred to giving senior goalkeeper Avikar Khakh his first career start. He played admirably in what was more or less his debut, as before this outing he had only entered a game as a substitute. He was an instrumental element in holding Valley Stream North to a single goal. He tallied 9 saves on the afternoon, including a pair in the second half from point-blank range to protect the tenuous lead.
The stout goalkeeping and defense was far from the only factor in dictating Hewlett’s success. The Bulldogs did an impressive job of applying pressure for the entirety of the 80-minute match. Their initial goal was a lengthy strike from defender David Lamour, his third tally of the season.


The Bulldogs maintained a one-goal lead into the second half, until Fernando Alvarado scored a beautiful goal on a volley from Max Mariasch. Valley Stream North did manage to respond shortly with a goal, but Hewlett kept the Spartans off the board off the board for the remainder of the match. Osmar Marcos scored on a nifty grounded ball with two minutes left to seal the outcome.
The Bulldogs will look to utilize the momentum garnered from this match in their upcoming contests and improve 2-4-1 record.
For Valley Stream North, its inability to capitalize on numerous opportunities throughout the course of the match was its main pitfall. It had opportunities to score in both halves and never stopped working.
“I feel like we were juts kind off unlucky” Valley Stream North coach Dave Aguado stated. “Their goalie made some nice saves, and we didn’t help by shooting them right at him.”
In the first half, North’s offensive struggles mainly came from corners, as it had two corners that resulted in shots on goal yet couldn’t sneak one through.
The hosts finally did manage to get on the scoresheet around 10 minutes into the second half, when freshman forward Felipe Rojas outleaped a defender and headed one into the back left corner. From there, they just couldn’t capitalize, but came close at multiple junctures.
Rojas almost scored another from well beyond the box but missed the top corner by a matter of inches. North then had two shots 1 on 1 with the goalie, but the aforementioned Khakh managed to neutralize the scoring opportunities and keep them out of the net.