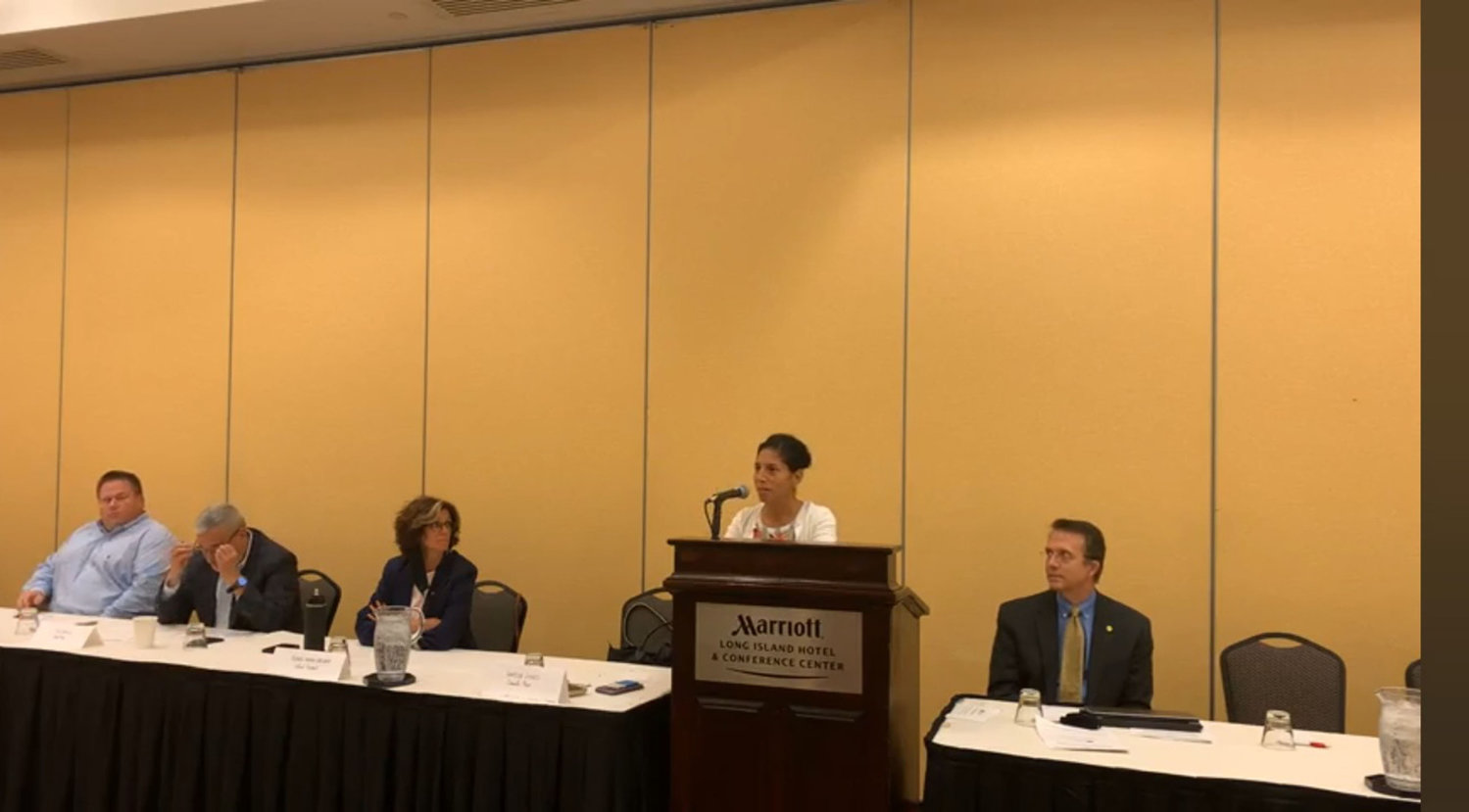 Vanessa Lockel, executive director of the Cornell Cooperative Extension of Suffolk County and the steering committee chairwoman, spoke at a town hall meeting at the Long Island Marriott on Aug. 26.
Facebook
By Nakeem Grant

Four and a half months after a deadly shooting at the West Hempstead Stop & Shop, there is renewed support for the victims. Several store employees sat in on a town hall meeting hosted by the National Compassion Fund on behalf of the Stop & Shop at the Long Island Marriott in Uniondale on Aug. 26.

A nonprofit organization that distributes charitable contributions in the aftermath of mass-casualty crimes, the National Compassion Fund, headquartered in Virginia, formed a steering committee with Stop & Shop on Aug. 12 to help allocate funds for those affected by the April 20 shooting. While most of the employees who attended the meeting were reluctant to speak, many were curious to hear about the group’s efforts to help the victims.

“Obviously, it’s been a sad and sensitive time,” said Vanessa Lockel, executive director of the Cornell Cooperative Extension of Suffolk County and the committee chairwoman. “We’re grateful to have the assistance of the National Compassion Fund, who is coordinating this private charitable contribution for the victims at this time.”

At around 11:30 a.m. on April 20, 31-year-old Gabriel DeWitt Wilson, of Hempstead, allegedly walked into the West Hempstead Stop & Shop with a .380 caliber pistol, and shot and killed 49-year-old manager Ray Wishropp, of Valley Stream, and wounded two others who were not named. Wishropp was the father of seven children, including two daughters who attend Valley Stream South High School. There were an estimated 200 or more shoppers in the store at the time of the shooting, according to Nassau County Police Commissioner Patrick Ryder.

Wilson was indicted on murder, attempted murder and weapons charges on June 4.

“Gabriel was a troubled employee,” Stephen Fitzpatrick, commanding officer of the Nassau County Police Department, said in a previous Herald story. “He was having disputes with other workers and threatening them, and was brought into the management offices several times.”

Wilson had met with the Stop & Shop’s manager and requested a transfer to another store about an hour earlier, according to Fitzpatrick. County police captured Wilson in Hempstead after a massive search later that afternoon.

Donations have since poured in to the West Hempstead Compassion Fund, established by the national organization, with more than $575,000 donated on GoFundMe by nearly 500 donors — including $500,000 from Stop & Shop, whose corporate offices are in Massachusetts.

“Our goal is to help the victims and families as much as possible and as quickly, efficiently and fairly as possible,” said Jeff Dion, executive director of the National Compassion Fund. “We’re responsible for collecting and distributing contributions in the aftermath of mass-casualty crimes. The money is still coming in for West Hempstead, and it will continue to come in.”

The steering committee has published a set of draft protocols on its website, www.nationalcompassionfund.org, for those affected by the shooting to receive funds, which have not yet been finalized. “This is part of our commitment to transparency,” Lockel said. “We’re hoping to get more feedback on these proposed rules going forward.”

The National Compassion Fund has aided victims of many recent tragedies, including mass shootings in Indianapolis; El Paso, Texas; and Parkland, Fla. Donations will be accepted through Oct. 15, with the distribution set to take place in early December. Donations can be made at bit.ly/3lZlYok.