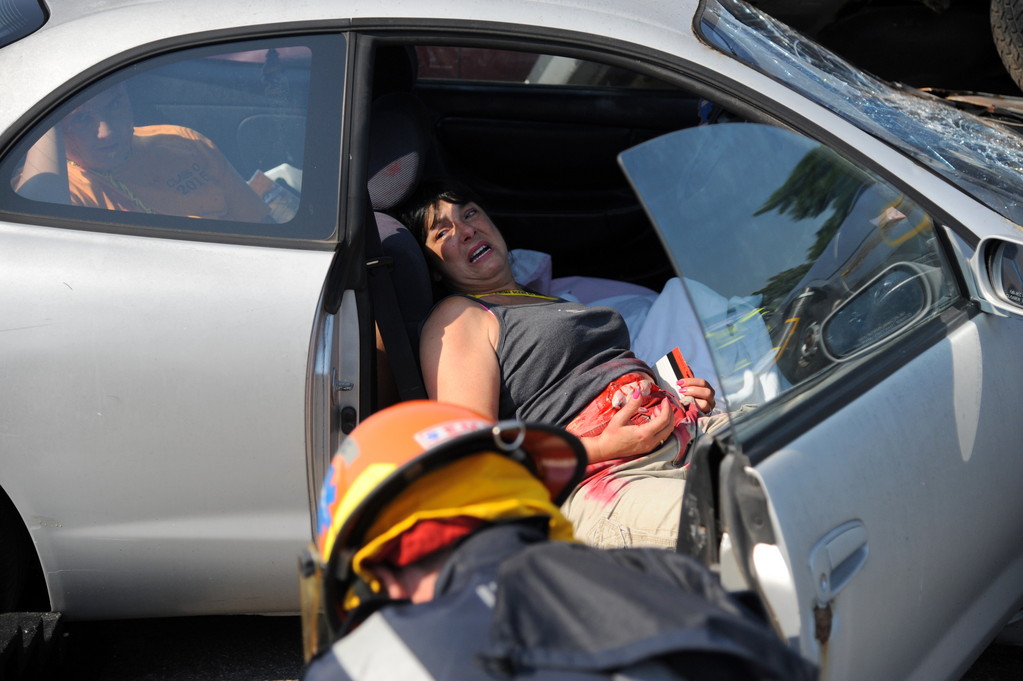 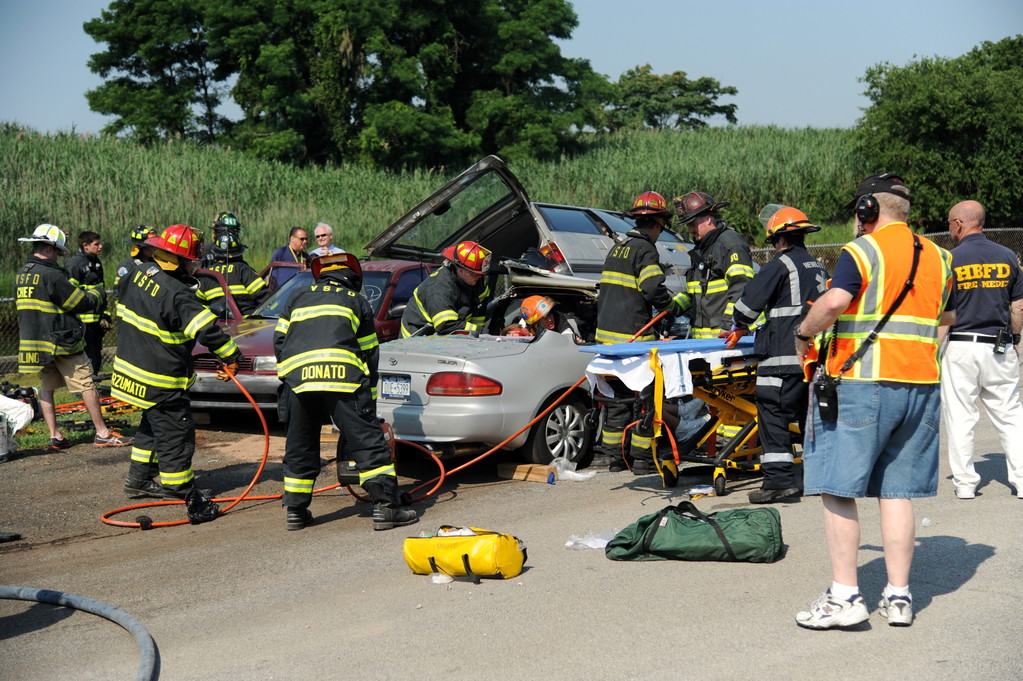 Valley Stream and other local fire departments participated in a rescue drill on July 1 at North Woodmere Park, simulating a three-car accident.
Donovan Berthoud/Herald
Previous Next
By Laura Cerrone

By 9 a.m, the weather was already humid and hot, but the Valley Stream Fire Department and members of other participating emergency agencies were dressed in their gear and ready to act on July 1. Although the three-car accident was staged, the junior members of the fire department along with EMS and police officers treated the drill as a real incident.

Detective Gary Ferrucci of the Nassau County Police Department coordinated the mass casualty drill exercise in which the Valley Stream, Hewlett, Woodmere and Lawrence-Cedarhurst fire departments all responded to at North Woodmere Park. The junior fire department is comprised of 12- to 17-year-olds, and the multi-discipline drill simulated a real call they may have to answer if they join the department at 18.

“These drills train them in different aspects of firefighting and community involvement,” said Mike Seltzer, an ambulance medical technician with the Police Department and a member of the Nassau County Emergency Ambulance Bureau.

“One of the most important things they learn is that it is a crime scene until the detective deems it otherwise,” Seltzer added. “The Fire Department and EMS have to report what they do and need to stabilize the people with as little compromise to the scene.”

A mass casualty incident is one where five or more people are involved in an accident. In the case of this drill, a three-car accident was staged with nearly 20 victims that included car occupants, bystanders and pedestrians. This drill is performed about once every three years, according to Ferrucci.

The drill began at 9:25 a.m. when the Valley Stream Fire Department responded to a call of a three-car auto accident. The call went out to Engine 1, Truck 1 and the rescue company. When the chief arrived, he alerted the other units it was a mass casualty incident and one car was possibly on fire. A fire hose was deployed and the first ambulance arrived along with engines from Hewlett, Woodmere and Lawrence-Cedarhurst.

Members of the Nassau County fire and EMS services evaluated the response and removal of victims by the junior fire department and EMS workers; the evaluators were not to interfere with the procedure, or offer suggestions or criticisms.

The junior fire and EMS participants received an assessment and review of their performance.

Miriam Wahrsager outfitted the victims with make-up and artificial injuries to help the junior fire department and EMS members assess and provide emergency medical assistance. All the victims were assigned an injury. It was the job of the first responders to determine which victims would be sent to the hospital based on the severity of their injuries.

To get the remaining victim out of one of the cars, the members operated a smaller version of the jaws of life. Dripping with sweat, exhausted from the heat, the members lifted out the victim and onto a stretcher. While it was only a drill, this could become a very real scenario for the members that become a volunteer firefighter or emergency medical technician.

A Nassau County Police helicopter was cleared to land at the park to demonstrate how to secure a scene for a landing. “A helicopter reduces 15 minutes of travel time to a trauma center,” said Mike Field, a Valley Stream emergency medical technician. The closest adult trauma centers are in Jamaica and Oceanside, and children are sent to the Regional Pediatric Trauma Center at Cohen Children’s Medical Center at Long Island Jewish Medical Center.

Some injuries, such as ones sustained to the spine, can be worsened by a bumpy hospital ride and require a smoother, faster helicopter lift. Time is also an important factor. “You want to get a person out of the scene and to a hospital within an hour, if it’s really bad then in 10 minutes,” Field said. “Scenes are dangerous so sometimes they take time.”

After the juniors and EMS members stabilized the scene and victims, the Nassau County Police Explorers performed an accident scene investigation. The Explorers are a group of 14- to 21-year-olds learning the skills police would need on the job. This drill also served as a training exercise. From July 16-21, the Explorers will be competing at the 2012 National Law Enforcement Exploring Conference in Fort Collins, Colo. at the University of Colorado. Daniel Johannessen, an officer with the NCPD Community Affairs Unit, oversees the Explorers and is taking 37 of the 200 Nassau County Explorers to the competition.

“The explorers have received national titles in the past two times they have been to the competition, and they have taken three First Place trophies out of 12,” Johannessen said.

The Nassau County Explorers will be competing against 3,000 to 4,000 other nationwide exploring teams. The Explorers have been training every Saturday since January in preparation.

A1 Auto Body brought the three cars used in the drill. The towing service has been working with the fire departments for more than 20 years.

Ferrucci came to Brian Hogan, the facilitator at the towing service for help to identify a side-view mirror that had fallen off a car. Since then the service has been providing tows for cars involved in accidents.

These kinds of drills refine the skills firefighters, police, EMS and other emergency service workers need on a daily basis. While the twisted metal and scattered glass shards on the ground were products of an exercise where no one was hurt, the techniques and teamwork learned can be used to save lives in the future.