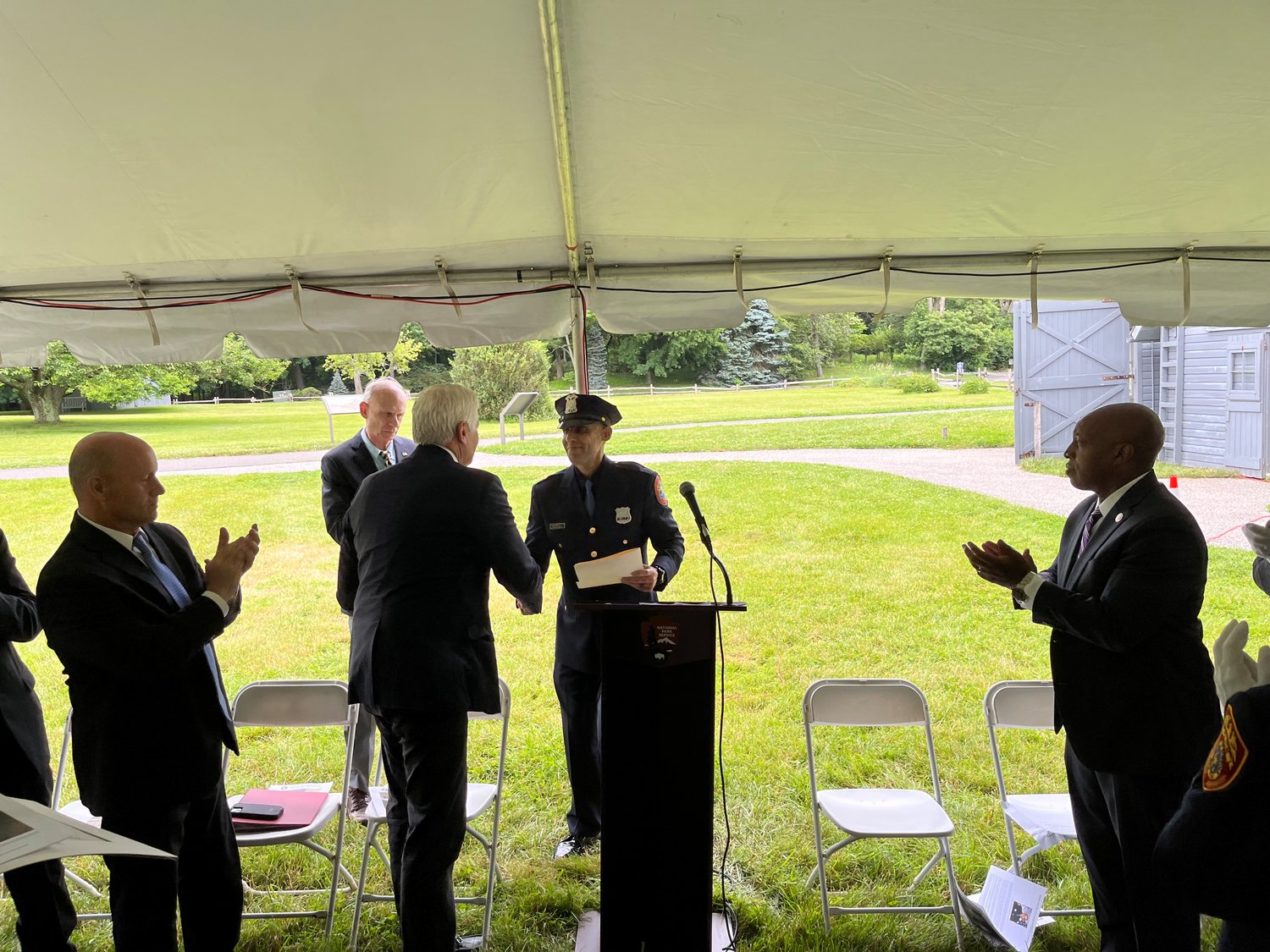 Each recipient of the Theodore Roosevelt Police Award received $1,000 to donate to the charity of his or her choice. In Officer Douglas Bedell’s case, he choose the Michael Magro Foundation.
Will Sheeline/Herald 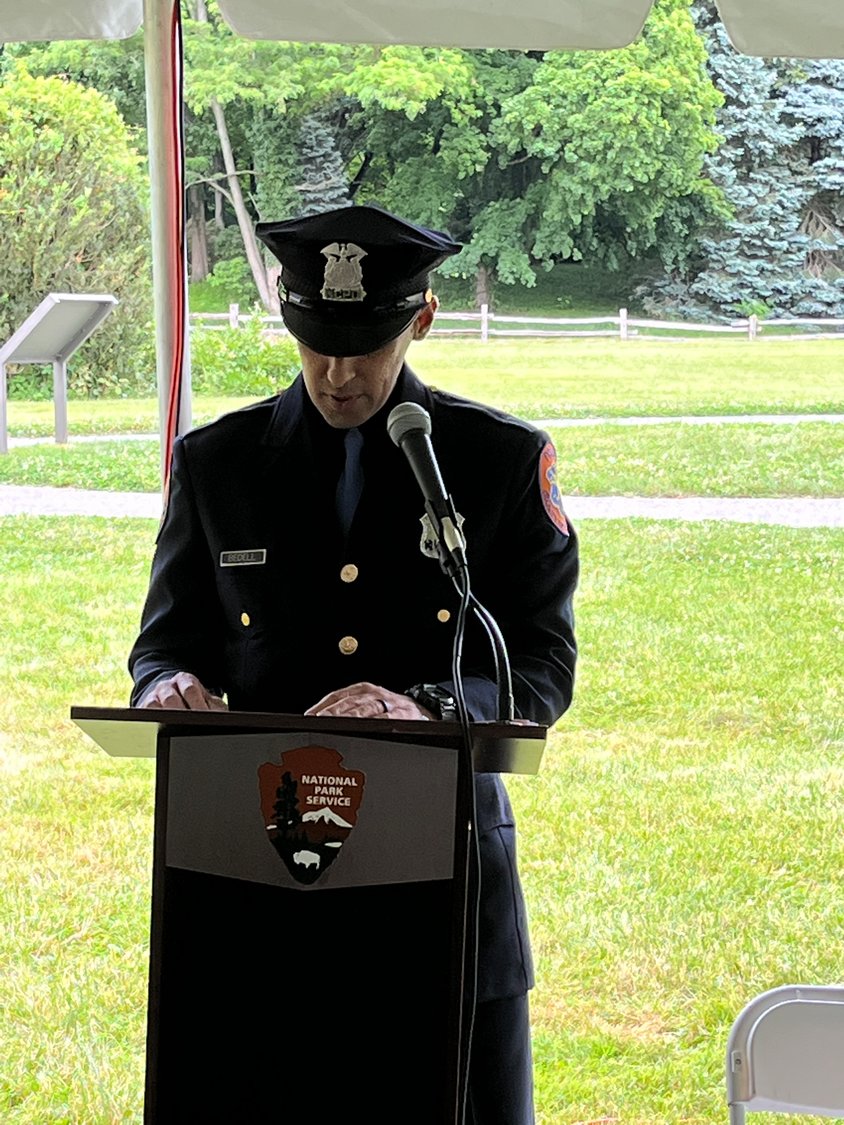 Bedell gave an emotional thanks to his fellow officers, his family and especially his wife, Gina.
Will Sheeline/Herald
Previous Next

What I’ve learned over the last five years is that this department is a family.”
Douglas M. Bedell, Recipient, Theodore Roosevelt Award
Fun facts about T.R.

Diagnosed with asthma as a boy, he was unable to attend school or leave his house without supervision throughout his childhood.

Witnessed the funeral procession of President Abraham Lincoln through New York City as a 6-year-old boy.

Overcame asthma through boxing and exercise.

Had the first phone installed in Oyster Bay so he could stay in contact with Washington while at Sagamore Hill.

It was a regular night on patrol for Nassau County Police Department 4th Precinct Officer Douglas M. Bedell in February of 2018, when he came across something unusual. It wasn’t a mugging, a speeding, or anything else that might normally capture the attention of an officer on duty. Rather, Bedell discovered a large lump where his neck and jaw met.
Bedell, who lives in Bethpage, went to his dentist, thinking the problem was nothing more than a wisdom tooth or some other dental issue. What doctors found instead was a malignant mass infected with non-Hodgkin’s diffuse large cell B lymphoma, which occurs when the body makes abnormal B lymphocytes, a type of white blood cell that normally helps fight infections.
Bedell chose the most aggressive form of treatment, epoch chemotherapy, so he could be back on patrol with his fellow officers as soon as possible. On June 16 he was presented with a Theodore Roosevelt Association Police Award, and in his thank-you speech, he detailed the harrowing days he spent at Memorial Sloan-Kettering in Manhattan, hooked up to an IV machine for the chemo, while his wife, Gina, sat by his side.
“Essentially, for four and a half days straight, you’re hooked up to the chemo and it’s just running through your body nonstop,” Bedell recounted. “Each round, the strength of the chemotherapy was greater than the last, and by the later rounds I began to need blood transfusions just to keep going, as my body began to show wear.”
But the treatment forced the cancer into remission, and on October 15, 2018, Bedell returned to the 4th Precinct, and, at his insistence, to full duty. As it turned out, however, the chemotherapy irreparably damaged his liver, and Bedell is now seeking a liver transplant.


Police from across Nassau and Suffolk counties gathered at Sagamore Hill, Theodore Roosevelt’s summer home in Oyster Bay, to honor Bedell and Officer Jocelyn Nuttall, of the Suffolk County Police Department’s 2nd Precinct, for their courage in the face of adversity and their dedication to serving their communities. Both received the Theodore Roosevelt Association Police Award.
The association is dedicated to preserving memories of Roosevelt and perpetuating his ideals. First known as the Roosevelt Permanent National Committee, then the Roosevelt Memorial Association, the organization was founded on Jan. 9, 1919, three days after Roosevelt’s death.
Howard Ehrlich, its chief executive officer, explained to the gathered crowd how events like this one honor both the recipients and the legacy of the late former president. “We present this award to officers who have overcome some obstacle in their life, as T.R. did many times in his life,” Ehrlich said. “He overcame obstacles all throughout his life, and this is what we honor today.”
The Police Award is presented to one officer from Nassau County and one from Suffolk each year. Nuttall recovered from a head-on crash with a utility truck in 2016, which left her with a fractured spine and lacerations on her left arm.
Speaking at the ceremony, Nassau County Executive Bruce Blakeman told the officers that the resilience they show honors the legacy of T.R., whose battles with asthma and other illnesses in his childhood defined his character as an adult.
“It’s really important that we recognize the accomplishments, and especially the courage, of our police officers,” Blakeman said, “and we have two prime examples here today.”
Nassau County Police Commissioner Patrick Ryder recalled meeting Bedell when he was sworn into the police academy, and again at Bedell’s graduation. Ryder maintained that officers of Bedell’s and Nuttall’s caliber show the best the department has to offer.
“Nobody understands the sacrifice that we go through every single day, the risks that we take every single day,” Ryder said. “And then you get officers like Jocelyn and Doug, who come out and overcome their injuries and illnesses and come back to work, because they love this job.”
Bedell fought back tears when it was his turn to speak, thanking his fellow officers, friends and family members for their support during his bout with cancer and his ongoing struggle to find a liver donor. He said he had seen firsthand that the strength of police departments is the camaraderie and esprit de corps that makes being an officer more than just a job.
“What I’ve learned over the last five years is that this department is a family,” Bedell said of the NCPD, “and although I have the honor of receiving this award, I share the honor with all my brothers and sisters in blue, because without them I would not be here today.”
Report an inappropriate comment