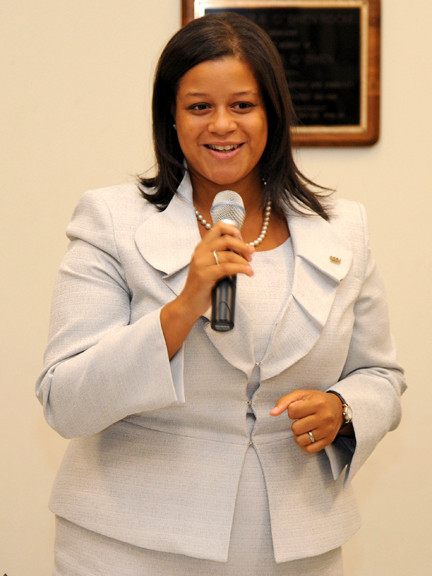 Michaelle Solages, speaking at the Aug. 30 primary debate, was the winner for the new 22nd Assembly District seat on Election Day.
Donovan Berthoud/Herald
By Brian Croce

After months of campaigning, a day of voting and a few hours of tabulating results, a winner was named in the newly created 22nd Assembly District — Michaelle Solages. She will represent a district that spans from Bellerose to North Woodmere and includes all or parts of Elmont, Franklin Square and Valley Stream.

Both candidates in the race were running for elected office for the first time — Solages, a 27-year-old Democrat from Elmont, and Sean Wright, 43, from North Valley Stream. Although their experience holding an elected position was the same, their support from voters was not, as Solages garnered 66 percent of the vote to Wright’s 34 percent.

“It was a competitive race,” Solages said. “Nothing in life is guaranteed, so you always have to work hard and make sure you put 100 percent into something you desire.”

Wright, an Independent who ran on the Republican line, said his campaign went very well and he was happy with the effort that he and his staff members put forth leading up to Election Day. However, he added, the newly designed district has more registered Democrats than Republicans, which made his objective harder.

“I understood the climb would be steep,” Wright said of his chances of winning. “I didn’t understand how steep it would be.” According to the Nassau County Board of Elections, 46.2 percent of registered voters in the 22nd Assembly District are Democrats while 29.1 percent are Republicans.

Solages said her campaign was “truly an American dream” and added that residents she met in the past few months have given her great support and ideas. “When I go up to Albany I can really start facilitating the changes that’s needed in our community,” she said.

In speaking with community members, Solages said, the changes that are needed focus on economic development, support for small businesses and better education for students.

Now that she has been elected, Solages is beginning to plan her first few moves as an assemblywoman. “One of the first things I want to accomplish is to sit down with the leaders in education in our community and see where we can enhance our students’ education and not put the burden of the expenses on the homeowners,” she said.