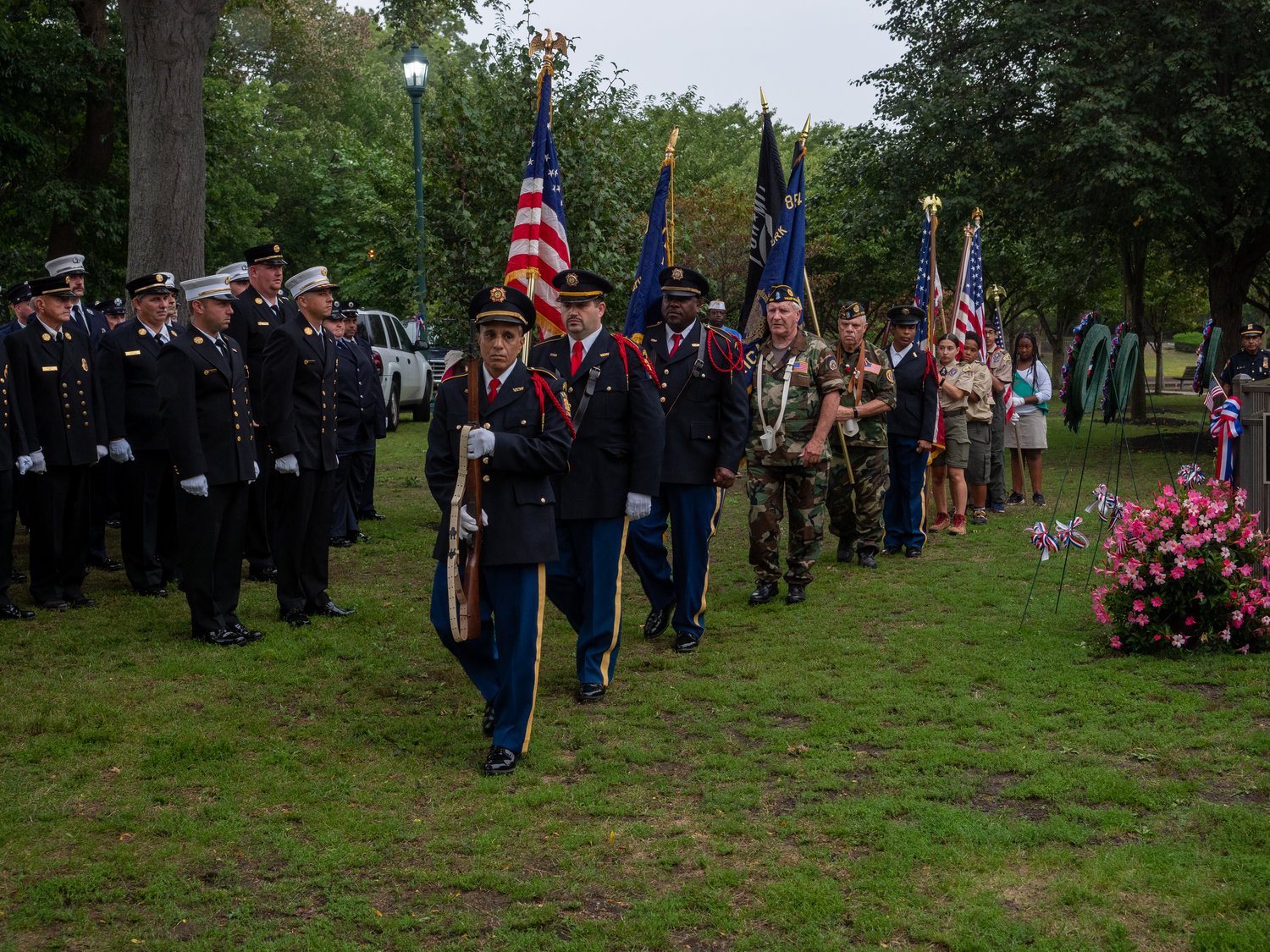 The village’s 9/11 annual remembrance ceremony began with the presentation of colors by members of the American Legion Post 854, Veterans of Foreign Wars Post 1700, the Valley Stream Boy and Girl Scouts, and the New York Naval Cadet Corp.
Courtesy Eric Dunetz 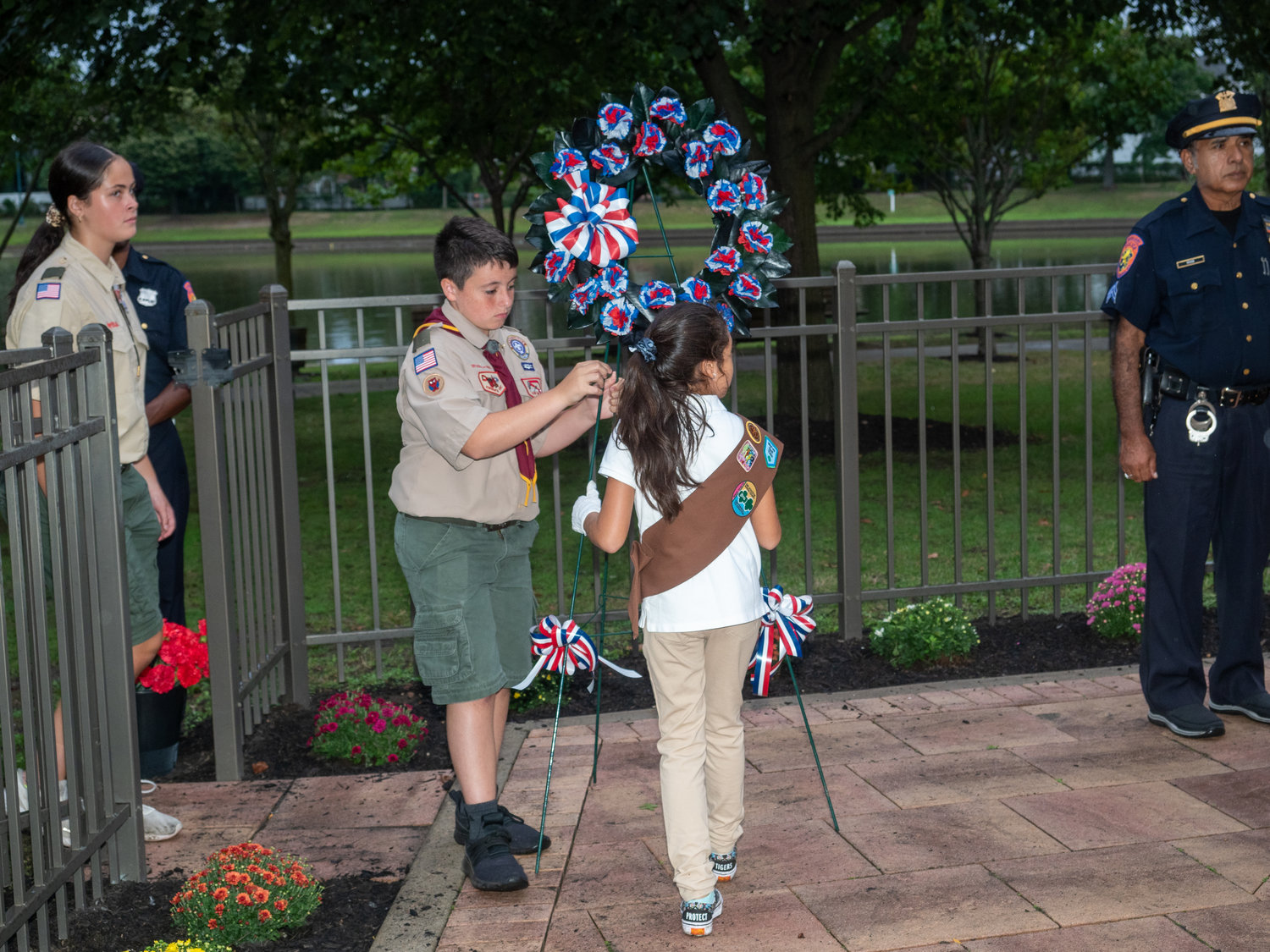 Memorial Wreathes are placed at the 9/11 memorial monument by the Valley Stream Boy and Girl Scouts.
Courtesy Eric Dunetz
Previous Next
By Juan Lasso

Gray clouds that had lingered on for most of the evening blotted out the sun. A gentle rain soon fell over Arthur J. Hendrickson Park as solemn faces standing beneath umbrellas crowded around the village’s 9/11 memorial monument.

More than two dozen of them including religious leaders, a school superintendent, public officials, village dignitaries, and residents gathered in a show of mourning last Sunday for the nearly 3,000 lives who died in the Sept. 11, 2001 terrorist attacks.

The annual ceremony began with the presentation of colors by members of the American Legion Post 854, Veterans of Foreign Wars Post 1700, the Valley Stream Boy and Girl Scouts, and the New York Naval Cadet Corp.

The Rev. Lawrence Onyegu, of Blessed Sacrament Church, delivered the invocation. “We gather to honor those we have lost from our community and throughout the United States. We remember when the towers fell. The clouds of dust. The smoke. The grief. The despair. The shock that overwhelmed everyone that day with many unanswered questions,” said Onyegu. “In our remembrance, we stand as a village and as a country to pray for an end to violence, hatred, and war.”

Prayers were silently made. Heads bowed in solidarity for the families still reeling from the emotional turmoil of that tragic day 21 years later.

“Twenty-one years today and the rain hasn’t stopped us from honoring these individuals either,”  said Nassau County Court Judge Robert G. Bogle, the master of ceremonies. “Our remembrance of that day will always be there.”

Mayor Ed Fare then took the podium to address a silent crowd of onlookers and remarked on the importance of paying tribute to those first responders and average citizens who paid the ultimate price in the ensuing relief efforts in Lower Manhattan and across the country.

“We remember lives lost and lives shattered. We remember chaos and horror. But most importantly, we remember the compassion and the decency of our fellow citizens. Ordinary individuals living ordinary lives reacted with extraordinary valor. That’s the memory that must shine through.”

Then he turned his attention over to those generations not yet born or not yet fully adults during the terror attacks, encouraging them to keep alive the nation’s memory of this exceptional loss.

“As an educator in the Valley Stream Central High School District, I faced my incoming class last week. These students were not even born on that day. A day we remember in vivid detail,” said Fare. “In our schools and in our homes, it’s our job to inform and educate them and all future generations of the historical significance and impact of the events of 9/11.”

Memorial wreaths were placed around the 15-foot-long piece of steel base from the ruins of the World Trade Center by the fire chiefs of the Valley Stream Fire Department, Valley Stream Boy and Girl Scouts, and the New York Naval Cadet Corps, as well as Deputy Mayor John Tufarelli and Trustees Sean Wright and Dermond Thomas. At the end of the ceremony, residents one-by-one walked over to place flowers at the base of the monument.

Teen could be first female Eagle Scout in Valley Stream