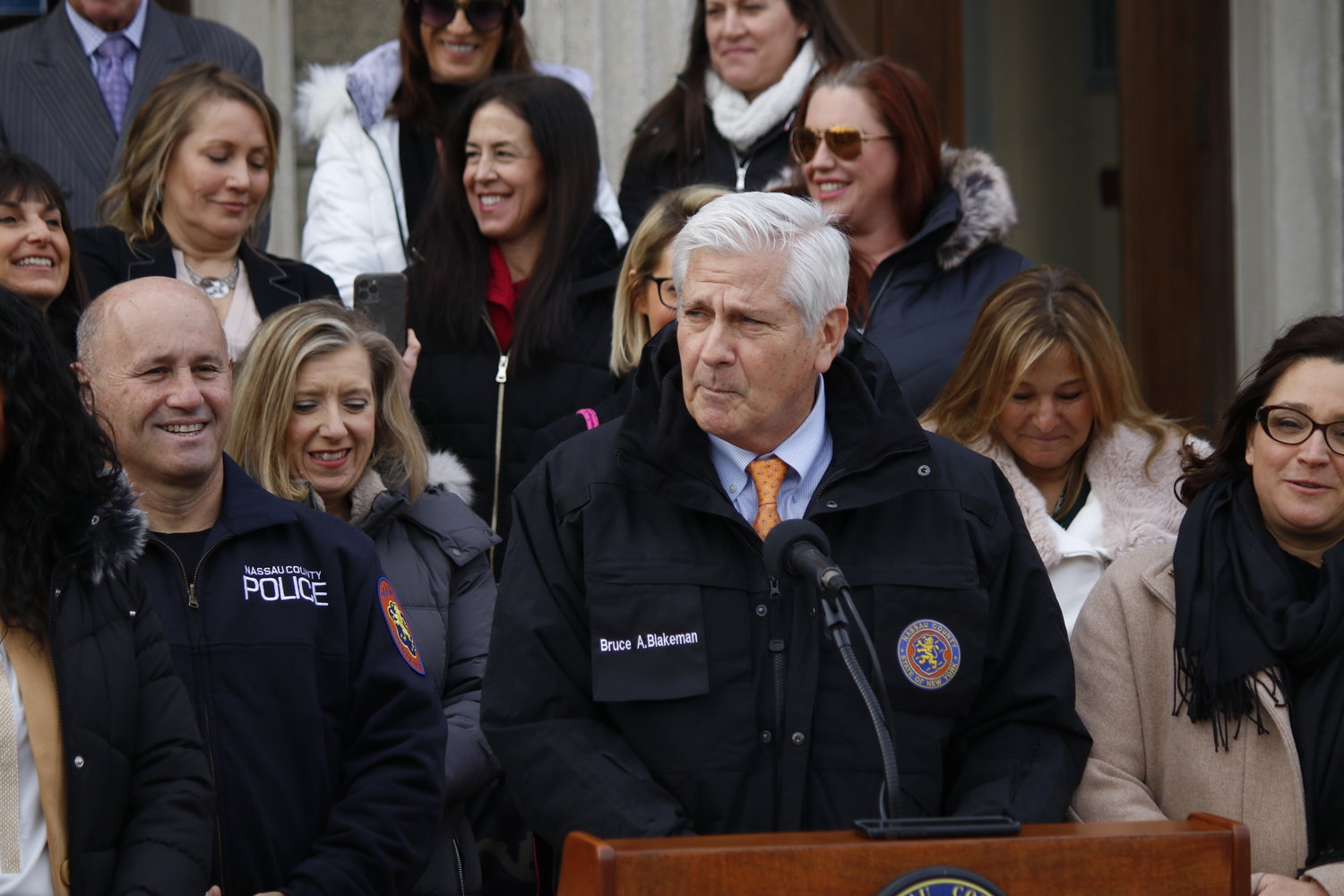 Nassau County Executive Bruce Blakeman signed an executive order directing local school boards to vote on whether to require masks in school by the end of the month.
Courtesy: Christina Daly

The executive order is a huge step in the right direction, but the next battle is getting our school boards, who are elected by us, to stand up for our beliefs and the rights of parents and children in our districts.”
Vinny Proposio, District 13 parent
By Juan Lasso and Cristina Arroyo

Nassau County Executive Bruce Blakeman signed an executive order last week that requires Valley Stream school districts, and all other Nassau County districts, to vote this month on whether to require masks in classrooms.
School boards must vote “to determine whether or not parents and children should be granted the constitutional right to reject mask mandates while in the classroom,” the executive order, drafted by the county executive’s legal counsel, stated.
The orders read in part, “Given the historical data on Covid-19 and the ongoing debate over whether masks are more harmful than beneficial to children and to school environments in general, we should protect the freedoms and statutory rights of students and parents by resting with the parents the decision whether their children should wear masks in school.”
The legality of the directive was promptly called into question as school, local and state officials issued statements arguing that Blakeman has no legal say in the matter.
State Education Department Commissioner Betty Rosa said that counties do

not have the legal authority to require boards of education to vote on specific issues. “School officers take an oath to obey all legal requirements,” a statement from Rosa read. “The State Education Department expects school boards will follow all legal requirements, including the face-covering regulation.”

In a statement to the Herald, Central High School District officials concurred with the statements from the State Department of Education and Gov. Kathy Hochul.

“The state mandate supersedes any executive order the county executive might issue in regard to the mask mandate. As such, the [Central High School] District will continue to adhere to all of our Covid-19-related protocols, including complying with the state mandate requiring masks be worn by all students, district personnel and visitors while in district buildings,” the statement read.

Meanwhile, Blakeman’s orders have drawn the ire and concern of many Valley Steam parents while also validating the frustrations of others, questioning the public health value of in-person, mask-wearing for their children.

“The executive order is a huge step in the right direction,” District 13 parent Vinny Proposio said. “But the next battle is getting our school boards, who are elected by us, to stand up for our beliefs and the rights of parents and children in our districts.”

The “parent’s choice” movement, advocating that the decision for children to wear masks in schools should be placed in the hands of families, decry mask-wearing in schools for its alleged public health downsides.

“Children need to be able to see their teachers’ and other students’ faces in order to learn how to properly communicate and understand emotions,” Proposio said. “Their socialization and communication skills are a huge part of early development, which are being totally ignored. A right to normal education is imperative to the development of our children, and these mandates are robbing our children of that right.”

While the pandemic has unfolded side by side with a mental health crisis that continues to exact its heavy toll on parents and students, there is still, however, no conclusive evidence to date showing that wearing a mask causes depression or anxiety in children.

Emerging research does suggest, however, that mask-wearing may heighten the mental toll of people dealing with social anxiety, with likely factors including the inability to pick out social cues in other people’s faces, the hypersensitivity to mask-induced social norms and the use of masks as a strategy to hide one’s perceived flaws.

But this is far from definitive.

Other parents argue that inconsistent mask-wearing protocols in school enable parents to avoid the wider public health responsibility of mandating masks for the safety of all children.

“It’s just completely outrageous, irresponsible and shocking to me,” District 13 parent Trisha Brown said. Regarding the health benefits of mask-wearing, she said, “Everyone has opinions, and you’re always going to read conflicting reports on things, no matter what topic you’re discussing. But after a while, you get a general consensus, and the overwhelming general consensus by the scientific community is that masks work.”

Blakeman has said there is little scientific evidence to demonstrate that masking reduces transmission of the coronavirus. The science says differently.

According to the federal Centers for Disease Control and Prevention, at least 10 studies have “confirmed the benefit of universal masking in community level analyses.” The agency further states, “Each analysis demonstrated that, following directives from organizational and political leadership for universal masking, new infections fell significantly.”

A common misconception that children cannot transmit the virus to others is also false. According to the CDC, “Children and adolescents can be infected with SARS-CoV-2, can get sick with Covid-19 and can spread the virus to others.”

District 13 parent Marteena Morano-Singh argues that with Blakeman’s executive order over the question of mask-wearing in schools taking center stage, parents are being lured into picking the wrong battle to fight.

“It’s always been the wrong debate,” Morano-Singh said. “This partisan squabbling over the masks is just keeping us divided. Neither side is doing what’s right for the kids, which [is] implementing a remote-learning option across the board, because then parents who don’t feel comfortable masking their kids could keep their kids at home.”

“It’s not ideal to have children masked for six to eight hours a day,” she continued. “There’s a very low percentage of children who are even vaccinated, so they should still be masked. I don’t think that’s even a question.”