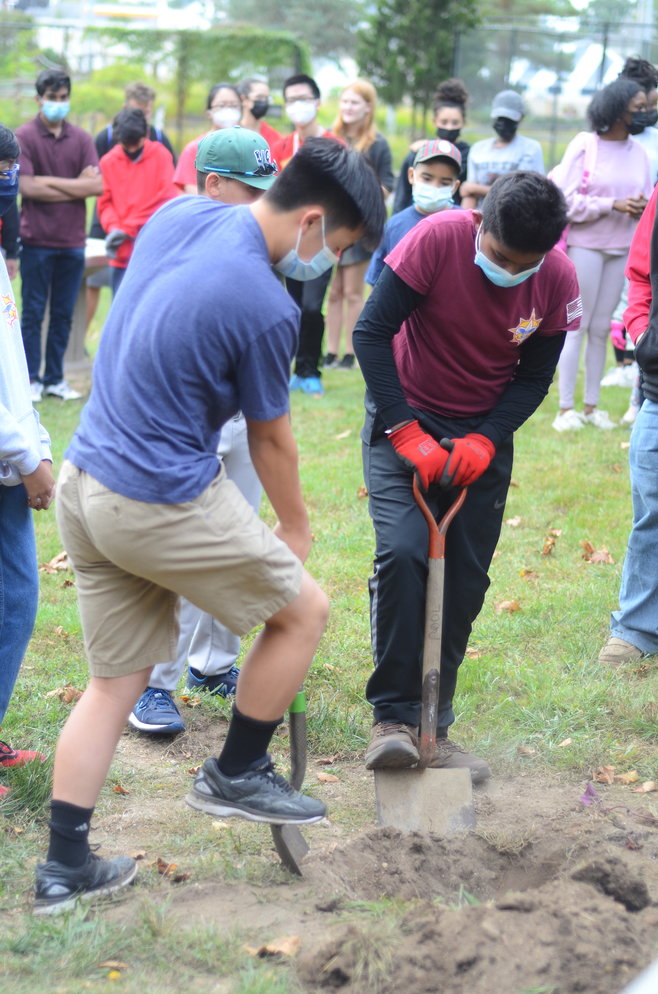 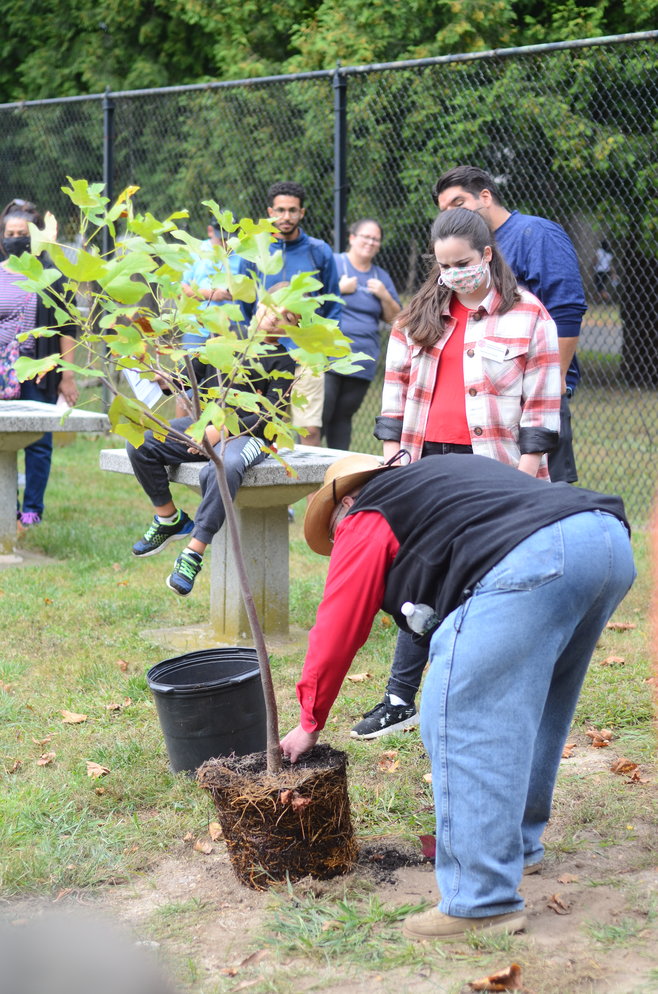 Vincent Drzewucki, with his team of fellow foresters, prepared a tree for planting.
Juan Lasso/Herald
Previous Next
By Juan Lasso

Dozens of student helpers from various service organizations gathered last Saturday to lend a green thumb to the village’s tree-planting beautification project at Arthur J. Hendrickson Park. The volunteers represented organizations including the Boys and Girl Scouts and National Honor Society and Builder’s Club of South Valley Stream High School.
“We’re doing this project to help out the community and conservation,” said Christopher Ramnauth, of Boy Scout Troop 109. “It’s very good to get service hours . . . and this seemed like a good project.”
“This is our community, and we want to do what we can as a troop to give volunteer hours back to the community and show the people that there is so much that can be done here,” said Adrian Ramnauth, Troop 109’s assistant scoutmaster. “This is our home. We want to beautify it. This is where it all happens.”
The young helpers first reported to the front entrance of the village pool with their advisers and club mentors. Once every head was accounted for, the drove of eager hands was escorted to the park by David Sabatino, the deputy village treasurer, where they met Vincent Drzewucki, a horticulture and urban forestry educator at the Cornell University Cooperative Extension.
Drzewucki, who has worked hand in hand with Eugene Boening, the village horticulturist, has played an instrumental role in growing and maintaining the health of the village’s tree canopy for a decade. Eugene Boening had patiently collected and cultivated the tree saplings over the course of the last year in time for the day’s planting. With his truck and park facilities crew, Boening transported the young trees to their chosen planting sites. The trees were taken from various green projects and community donations, including saplings from the New York State Department of Environmental Conservation’s tree nursery in upstate Saratoga, Drzewucki said.


Drzewucki and his team of fellow foresters addressed the young crowd, quizzing them on the environmental and health benefits of trees and communicating the importance of preserving a high tree canopy cover.
Valley Stream “is one of the unique villages that plants more trees than they take down,” Drzewucki remarked.
“It all starts here with healthy trees from your community, and the more, the better. We’ve been losing trees because of progress: building homes, businesses, putting in roadways. It’s time to start regrowing the canopy to take advantages of the benefits,” Drzewucki continued.
After, he and Boening directed volunteers to the first planting site where they gave a demonstration on how to plant a tulip tree sapling, capable of growing to a height of 125 feet in 50 years. The young helpers were then split into groups and sent to designated spots throughout the park to roll up their sleeves, grab shovels and get down to planting.
“All of these kids can gain a sense of place and be least likely to do vandalism and abuse the park,” noted Guy Jacob, a gardening educator who taught in the Wheeler Avenue School for three decades, and current master gardener for the Cornell Cooperative Extension. “When you are getting your hands dirty and touching the soil, [the park] becomes part of you,” he said.
At the end of the tree planting, a tree owner’s manual issued by the United States Department of Agriculture, Forest Services was made available to the newly minted planters.