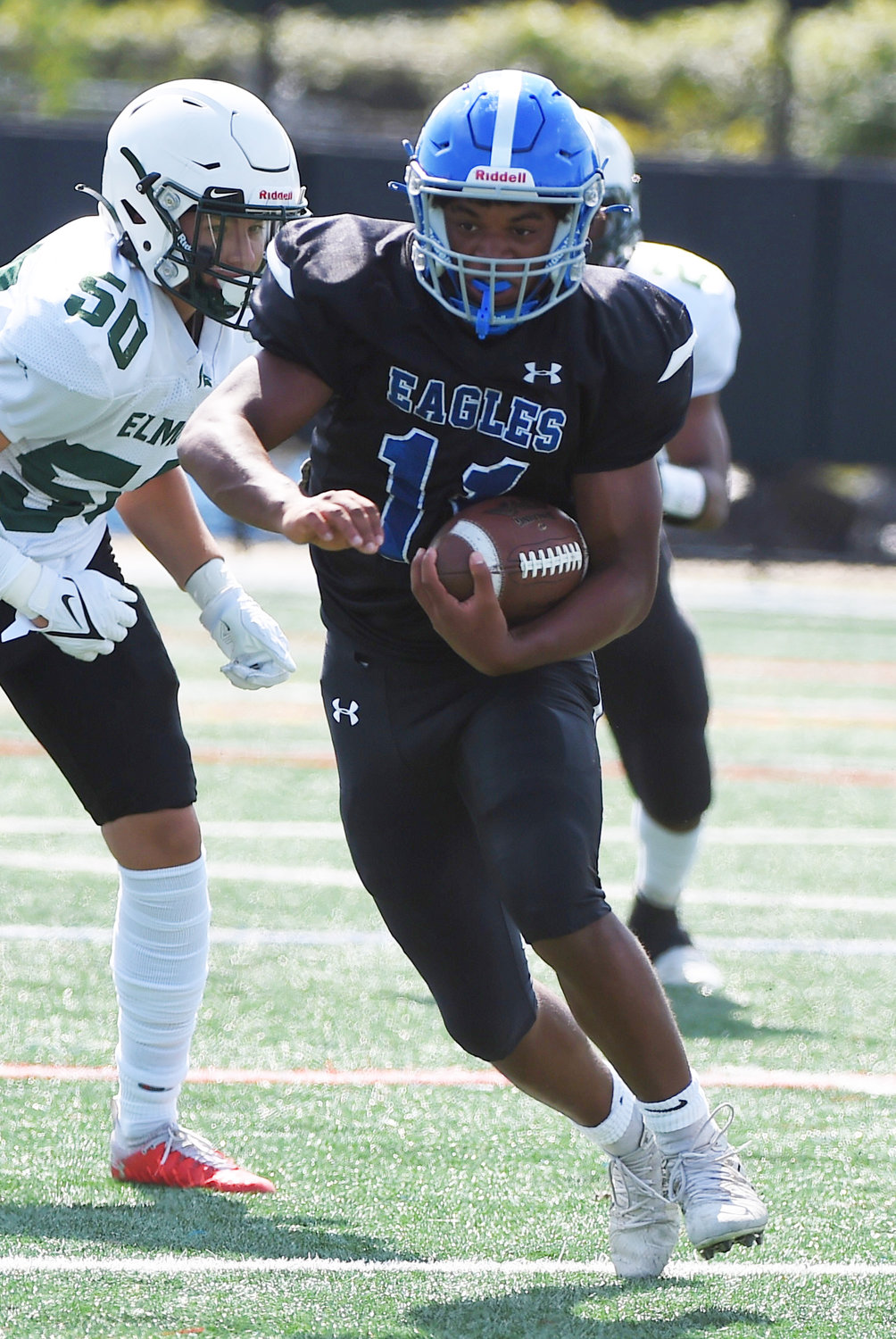 Sitting out last season after undergoing surgery to remove a bone from his left ankle, Valley Stream Central’s Joshua Rogers remembers how frustrating it was to watch from the sideline as the Eagles dropped their finale to visiting Elmont and missed the Nassau Conference II playoffs.

On Saturday afternoon, Rogers was back in action and did his part to make sure the result would be different this time. The junior running back had 160 yards and a pair of touchdowns to lead Central to a come-from-behind 18-12 victory over the Spartans on the turf at Memorial Junior High. His 8-yard score with 9:27 left proved the difference in the opener.

“It was a slow start but we knew we could come back,” said Rogers, who tied the game midway through the third quarter with a dazzling 30-yard dash to the end zone. “We kept our eyes on the prize and I thank God that I was able to do what I did today.”

Valley Stream Central head coach Mike Rubino said the Eagles’ mood at halftime was even-keeled and attributed the comeback to their conditioning level. “These guys trained so hard in the weight room during the offseason and it showed today,” Rubino said. “We hurt ourselves with penalties in the first half, but we had a much cleaner second half and made big plays on both sides.”

Senior quarterback Quran Watkins capped a 70-yard drive to open the second half with a 3-yard touchdown run to cut Elmont’s lead in half. The Spartans had a tough start to the ensuing possession, losing 15 yards on a bad snap, and were quickly forced to punt from their own end zone. The Eagles took over at the 30, and Rogers made it 12-12 one play later.

“When they took that first drive of the second half and scored, I was concerned,” Elmont head coach Jay Hegi said. “Then they began to wear us down. We only had 20 kids dress and we got tired and made a few big-time mistakes. Kudos to them.”

An interception by senior Ingel Jones around midfield set up Central’s game-winning drive. Rogers, following the blocks of linemen Hamza Choudry, Chris Waterton, Chanz Williams, Jerome Nembhard and Showayne Lumsden Jr., ripped off runs of 28 and 18 yards to get the offense into the red zone. On his second touchdown, Rogers got the ball to the goal line just before it was stripped from his arms.

Nembhard had a sack to end what would be Elmont’s final possession. The Spartans forced the Eagles to punt with 2:30 remaining, but muffed the return and freshman Jaden Fox recovered to seal the outcome.

Elmont plays its home opener next Saturday against Sewanhaka. Central hosts MacArthur. Both games kick off at 2 p.m.