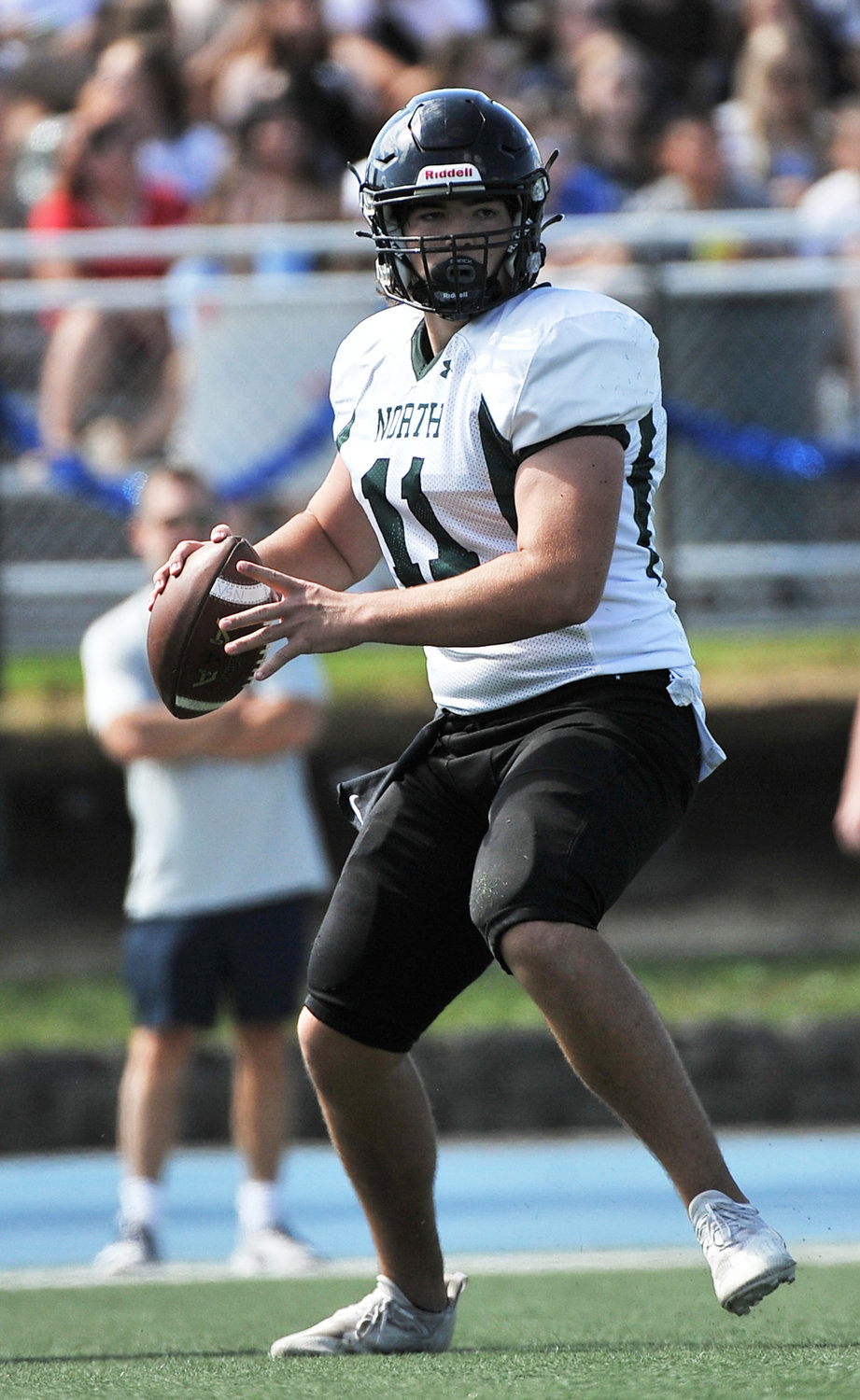 Valley Stream North’s football team secured a position in the Nassau Conference III playoffs, after escaping last Saturday’s game with a nail-biting 28-21 victory over Lynbrook.
After the game, Spartans head coach Mike Paolillo was thrilled with the way his team dealt with the adversity and stakes the win-and-in, lose-and-out game presented.
“This was a win-and-in game for both teams,” Paolillo said. “We went down early, and in years and games past I don’t know if we make the comeback that we did.”
After conceding relatively seamless touchdowns on Lynbrook’s two initial possessions, the Spartans’ defensive unit revived itself and began assembling stops. Defensive lineman Angelo Morales had his fingerprints all over this game, as he had 13 tackles and two sacks. Senior defensive back Aldean Sarmiento also registered a sack of his own.
“Our defense definitely led the way,” Paolillo said. “Our defensive coordinator was dialed in during the second half and they weren’t able to do much.”


While the defensive resurgence was impressive, it’s impossible to surmount a comeback without putting points on the board, and the Valley Stream North offense did just that. The offense did it through the air and on the ground, as the Spartans had two touchdowns passing and two rushing.
Quarterback Brian Farrell overcame a so-so first quarter and finished the day with 186 yards passing on 13 attempts and two touchdowns. The senior’s first touchdown was a 16-yard strike to senior Ethan Ramnarain, and his second was a 60-yard bomb to senior Andrew Lusterino. The latter finished with 145 receiving yards and Ramnarain finished the day with 20.
The rushing attack was well-balanced and effective, as even though no individual player had more than 40 rushing yards, the Spartans finished with well over 100.
Senior Vaughn Candelario led all backs with 34 yards. Senior Michael Capolino and junior Josh Lopez each found the end zone on the ground. The touchdown that Lopez scored was the final scoring play of the game, as his 7-yard scamper up the middle gave the Spartans the lead with 3 minutes left in the game and they held the lead from there. Interestingly enough, Lopez had been dealing with minor injuries throughout the game, but Paolillo said “he insisted that he got back in the game.”
For Lynbrook, the potent rushing attack that it had established in the first quarter grew more and more ineffectual as the game went on. Besides an elusive 70-yard touchdown by Michael Fagan during their initial second half drive, the Owls were kept off of the scoreboard.
Fagan finished the game with 133 yards, and fellow running back Christian Meszaros also had 112 yards. Lynbrook’s passing game resulted in only one completion. It nearly surmounted a last-minute drive to equalize the score, but an errant screen pass on fourth down deep in Valley Stream North territory sealed the game.
The Spartans finished the regular season 5-3 and earned the No. 6 seed. They’ll visit No. 3 Bethpage on Friday at 5 p.m.