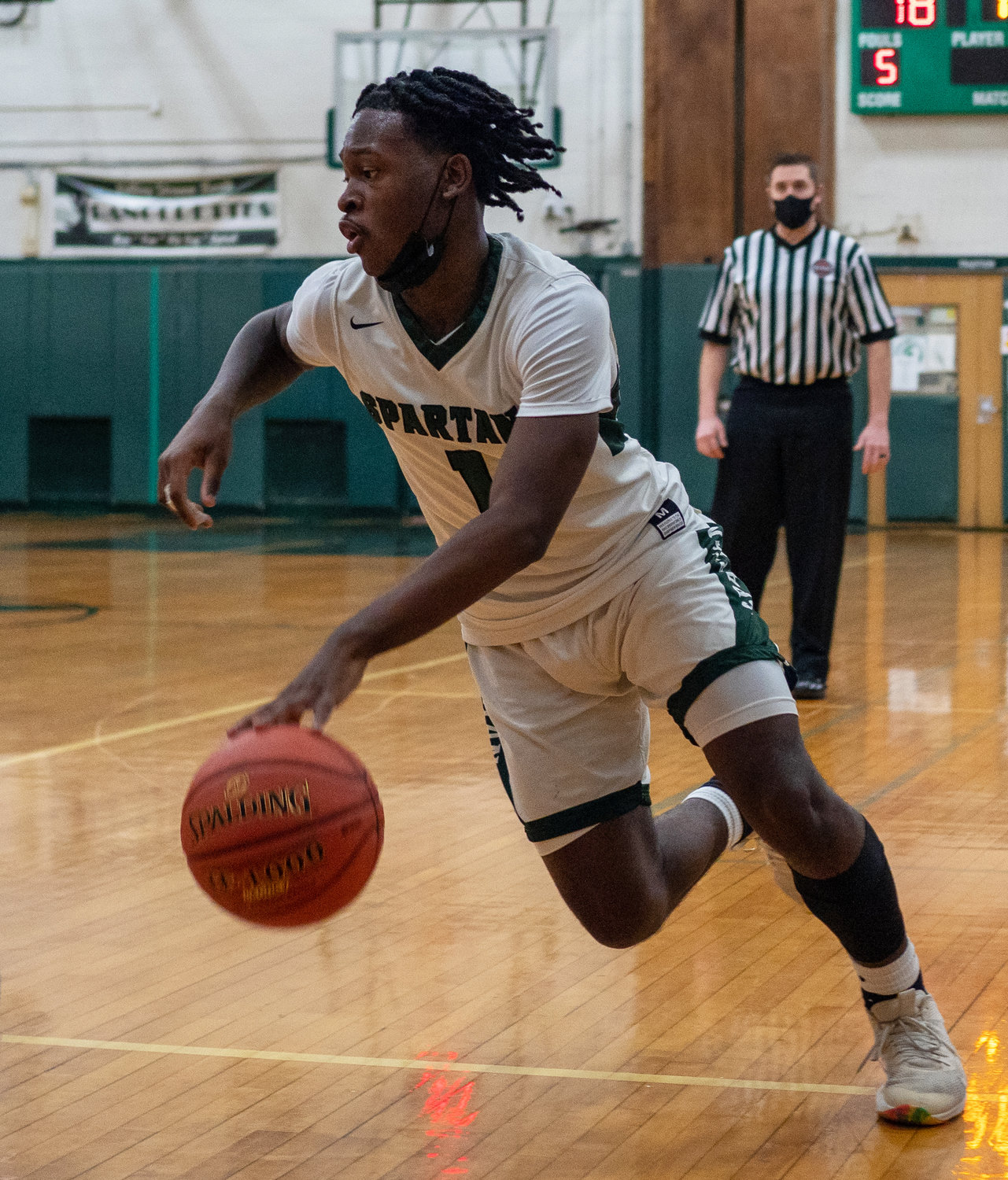 Valley Stream North was able to prevail in its non-league inter-town matchup Dec. 30, as the Spartans won their unofficial “rivalry” game against Valley Stream South by the score of 59-49.
Despite the potential cancellation due to COVID protocols and never truly finding a rhythm on offense, Valley Stream North head coach Michael McVeigh was content with how his team handled this gritty matchup.
“We had our ups and they had their ups and we both had our downs, but we were able to stay the course and not let them go on too big of a run,” McVeigh said. “When your shots aren’t falling, you have to try to get to the rim and we were able to do that.”
North (7-1 overall) managed to control the tempo early and maintained a 16-9 lead at the end of the first quarter. Perhaps the most notable takeaway was how well the Spartans were able to manage the game, as they never conceded the lead from there and kept the Falcons fighting an uphill battle all afternoon.
North scored in double figures in every quarter and led 28-17 at halftime and by a dozen points after three quarters.


With North’s three-ball never being a consistent source of offense, the team managed to adjust and primarily win in the paint and on the boards. Senior Godwin Eyiuche initiated a healthy portion of the offense, as he had 19 points and 5 assists, while also getting to the line 11 times. Seniors Brian Farrell and Malcolm Harrington controlled the glass, as each had double digit rebounds, with Harrington being a point shy of a double-double.
Senior Gio Grey also finished with 10 points, being the only player besides Eyiuche to reach double digits for the winners. His 3 treys were crucial in breaking South’s 2-3 zone, a defensive look which gave the Spartans fits at certain junctures.
For Valley Stream South (1-5 overall), a bit of rust was to be expected. The team has recently been ravaged by COVID, and their lack of fully healthy and prepared players made it ambiguous whether the game was even going to be played.
“For all of our front court guys it was their first day back since being out,” VSS head coach Mike O’Brien said. “With all the COVID stuff happening it will be about getting back into the swing of things.”
While they did a plethora of things successfully on the defensive side of the ball, the issue for the Falcons was generating easy looks on offense. Much like the Spartans, their perimeter shooting was lackluster, and they had slight issues deviating from that game plan.
Senior Ralston Campbell was South’s leading scorer with 16. Freshman Brady Delvalle had 13 points, with most of his buckets coming from repeated floaters in the lane. Senior Brady Manning also had 10 points, showcasing both the ability to pull up off the dribble and get to the lane and finish off-foot layups.