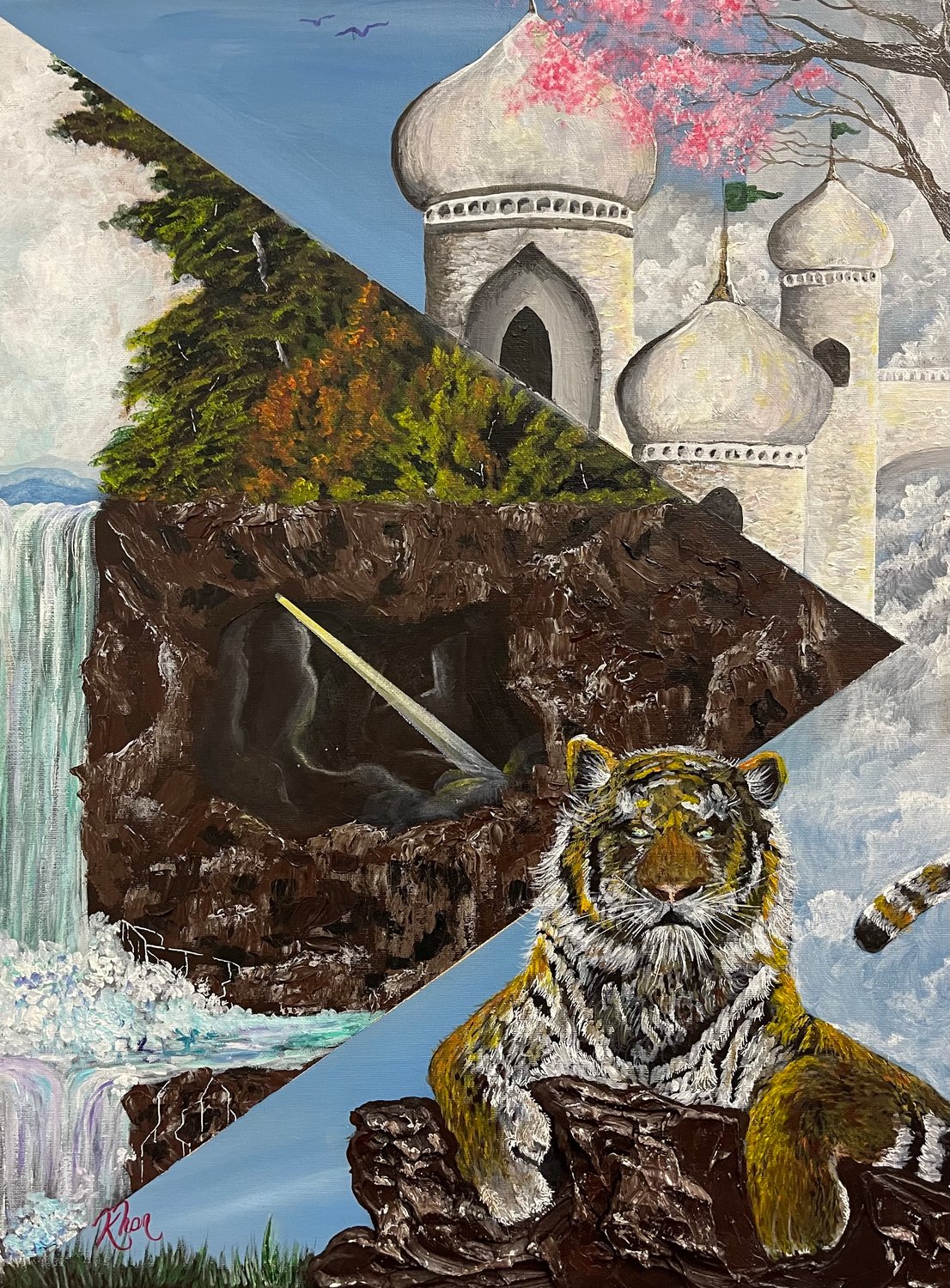 One of Khan’s paintings that show off his ability to create different worlds and feelings by splicing together different scenes and objects.
Courtesy: Matthew Khan 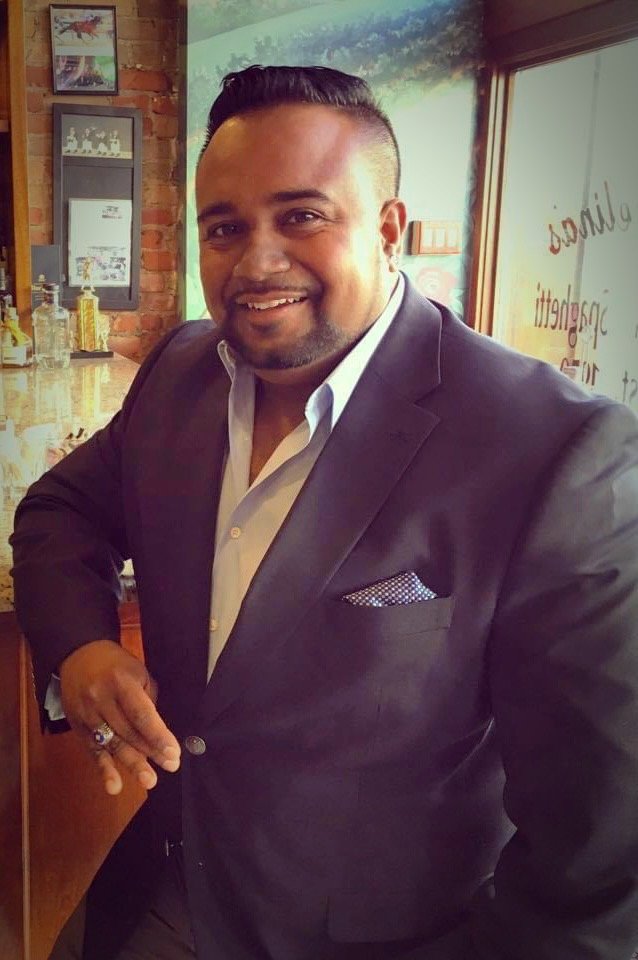 Matthew Khan is a resident who works for the village in IT and instructing village art classes. In his spare time, he is constantly experimenting with his work.
Courtesy: Matthew Khan 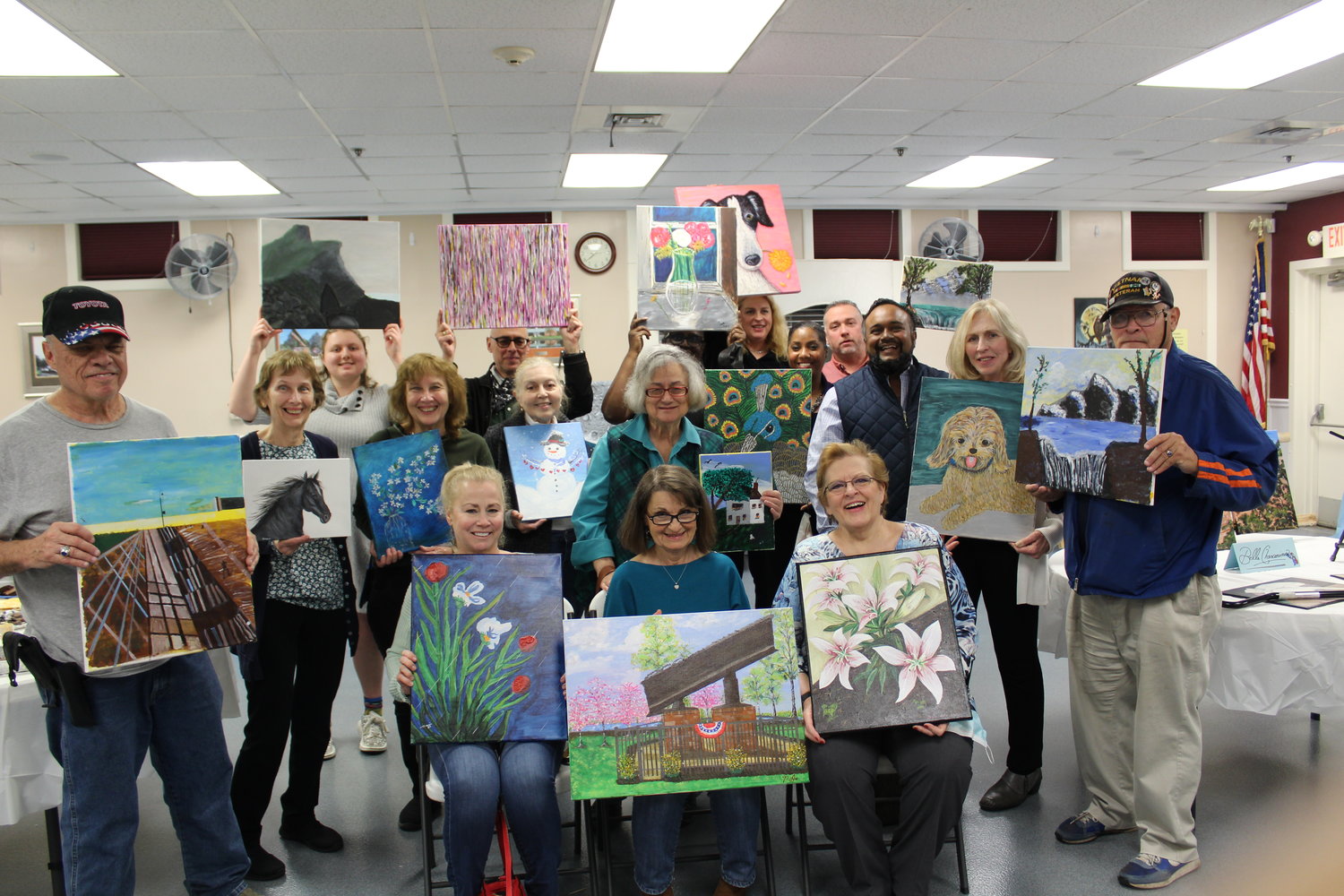 Matt Khan with his students at the Community Center showing off their completed works at the end of the 2021 acrylic art class.
Karina Kovac/Herald
Previous Next
A little more about the artist

Khan’s artwork has hung up at “Sip This.” a former coffee shop on Rockaway Avenue in Valley Stream and various other local establishments. A permanent 8’ x 3’ ocean mural painted by Khan hangs at the Valley Stream pool complex. His paintings are also included in the anthology “Poetry: Elixir of the Heart” by Sharon Ghanny, a collection of poetry and artworks from those of Caribbean descent.

The Henry Waldinger Memorial Library has started off the new year with a new art exhibit featuring the artwork of local artist Matthew Khan, 38. Originally planned to end at the close of last year, the library has decided to extend the exhibit viewing till the end of February 2022, giving the public some time to warm up from the chill and snow and head over to the see the art showcased in the library’s Adult Room.

As described by library director, Mamie Eng, Khan’s paintings are “very unique, [with] colorful, contrasting images and detailed precision.” Khan himself noted that what makes his paintings stand out are the textures and different perspectives that allow the viewer to form their personal meaning and impression from the work. Using various techniques such as glazing, underpainting, and dry brushing, Khan has detailed such textures as feathers, flesh tones, foliage, fur, rocks, water, and wood.

And yet, you are not able to pigeonhole Khan to one single type of style or technique, as he constantly attempts to use a different technique or idea to change his art to something distinct from the previous work so as to move in step with the viewer’s experience of change.

“What I find is depending on the day, you have a viewer who looks at one painting on Monday, feel some type of way about it, and on Tuesday, have a totally different interpretation of it,” Khan said. “The painting calls forward an emotion that could be based on the day they had, what happened at work, how they’re feeling at any given moment…and I feel that’s what makes a great painting: you can tap into it.”

While the local artist draws his inspiration from a range of sources (such as Claude Monet, Titian, Diego Velázquez, and Johannes Vermeer), the mentor that started it all would appear early mornings on the TV show The Magic of Oil Painting. It was a man by the name of William Alexander who taught viewers the wonders of the “wet-on-wet” technique. Once the passionate, four-something old onlooker, Khan now enters his fourth year hosting his 10-week beginner and intermediate acrylic class for Valley Stream residents as a seasoned art teacher.

In the footsteps of Alexander, he guides students through the process of making a painting. “Every step of a painting is like accomplishing a goal, and it can be gratifying to feel that completion” he describes. “I allow the stroke to do the work… [I like] creating multiple pictures in one picture. Reality gets kind of boring…but different perspectives that make [the paintings] not abstract, but still realistic, make it enchanting.”

Khan’s exhibit, which is the accumulated work of his teaching and life experience, rings in the new year as a hard-hitting first of a line-up of future art exhibitions to be displayed at the library, according to library director Maime Eng. Prior to the coronavirus pandemic, the library would host exhibits on a regular basis, however, for most of 2020, the library was not open to the public, and exhibits were suspended. Eng noted that there are “many talented artists in Valley Stream, and they are actively sharing their artwork on the Facebook page ‘Valley Stream Arts and Cool Stuff’ so the library is trying to tap into this pool of artists for future exhibits. “