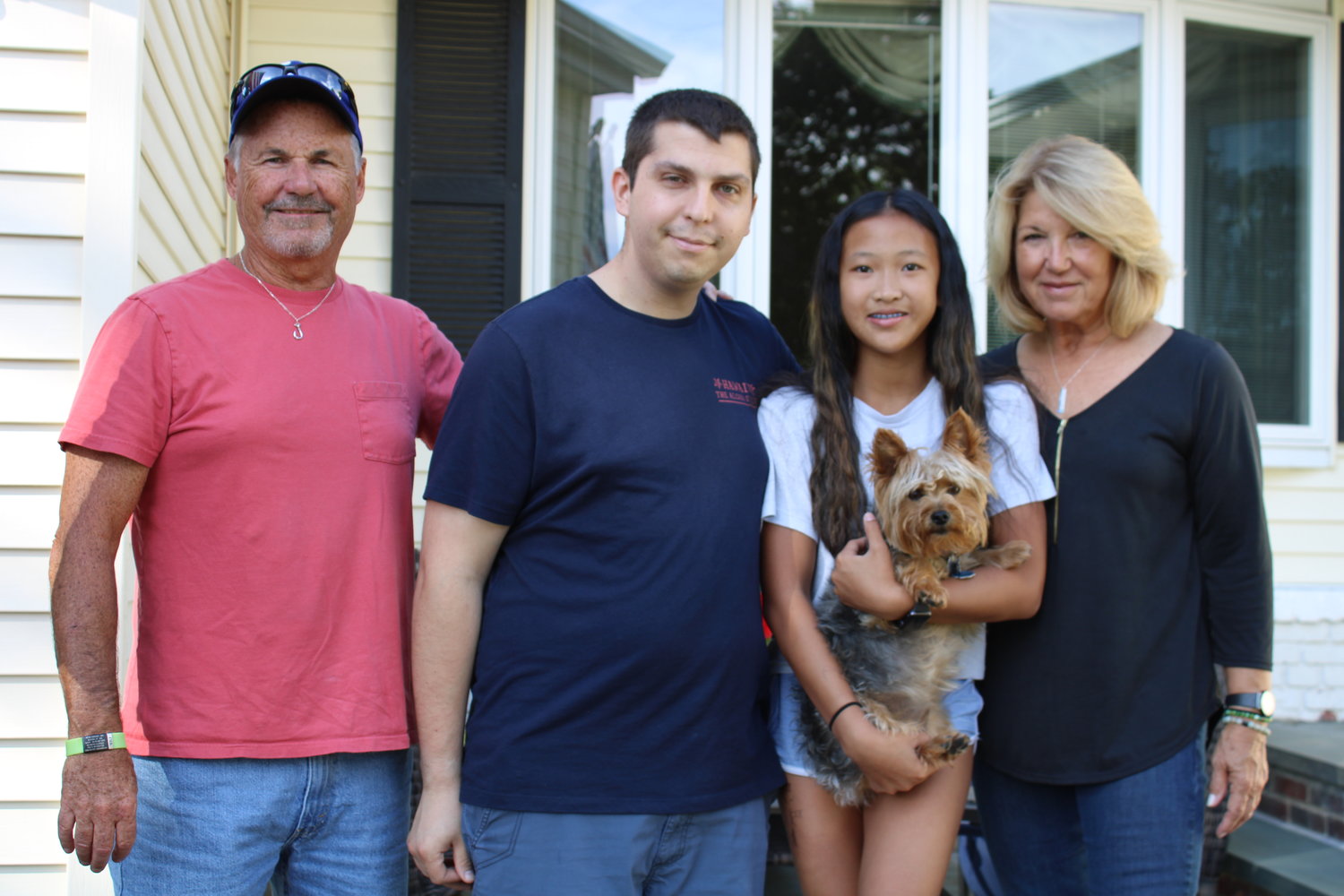 Peter, Tyler, Annie and Katherine Donohue outside their Seaford home. The family is trying to find a kidney donor for Tyler, who was diagnosed with end-stage renal failure in February.
Kate Nalepinski/Herald

Tyler is seeking a kidney donor that is blood type O. Those who are interested in donating can go to http://cornell.donorscreen.org, where they can fill out a form and receive additional information.

To follow Tyler’s story on his social media group Kidney Champion For Tyler on Facebook, go to https://www.facebook.com/groups/kidneychampfortyler.

Feb. 28 started out as a normal Sunday morning for Seaford resident Tyler Donohue and his family. His parents, Peter and Katherine, were preparing for a vacation in Connecticut the following weekend, and Tyler, 25, was mapping out the road trip route for his parents.

Suddenly, in front of his 12-year-old sister Annie, Tyler dropped to the kitchen floor and had a seizure. “We had no clue what was wrong,” Katherine, an aide in the Seaford School District, said. “We were in shock.”

Tyler was rushed to Nassau University Medical Center in East Meadow. After doctors conducted blood work, they told him that he was in renal failure, and had only 3 percent to 5 percent of normal kidney function. He was put on dialysis, underwent a biopsy and ended up in intensive care with internal bleeding in his right kidney because his hemoglobin was dropping to critical levels. He recovered after receiving nine blood transfusions over the course of about two weeks.

When the results of the biopsy came back about a week later, Tyler was diagnosed with anti-neutrophilic cytoplasmic autoantibody vasculitis MPO, a rare autoimmune disease of the small blood vessels that destroys the kidneys, lungs and sinuses. In Tyler’s case, only his kidneys were affected.

“It just came out of the blue,” Katherine said. “He had no symptoms beforehand — no pain, no discomfort.”

Tyler attended Nassau BOCES’ Joseph M. Barry Career & Technical Education Center in Westbury, became an Eagle Scout and graduated from Seaford High School in 2015. In high school he played junior varsity football and served as the high school mascot at Homecoming. For two years before the pandemic hit, Tyler, now 26, worked as a substitute cleaner in the district, but had to give up the job because of the pandemic.

He began chemotherapy at NUMC on March 12. After about three and a half weeks in the hospital and two chemo treatments, he returned home, where he received two additional treatments. Then, doctors indicating that there was no evidence of the autoimmune disease. With the condition in remission, Tyler and his family headed to the Northwell Health Transplant Center in Manhasset in early July, where he underwent additional testing, like echocardiograms and EKG’s, in preparation for seeking a kidney donor. A number of doctors agreed that he would be a good transplant candidate, he said.

“But they failed to inquire about the Covid vaccine,” Tyler said, telling the Herald that he chose not to be vaccinated because he had concerns about the safety of the vaccine for immunocompromised people like him.

This led to another complication: Northwell officials said they could not move forward with the donor search at their facility if he was unvaccinated. Northwell recently mandated the vaccines for its employees — over 76,000 in all — at 23 local hospitals and other outpatient facilities.

Asked how he felt about switching to a new facility, Tyler said, “There’s a lot of uncertainty, to be honest with you. When this all happened at first, I had no idea where to start. Neither did my parents. It hit me and my folks like a ton of bricks.”

But the family is moving forward. Tyler had his first virtual appointment at New York-Presbyterian/Weill Cornell Medical Center this month, he has an in-person evaluation scheduled for mid-October, and he believes he will be eligible for a kidney transplant in coming months. He is seeking a donor that has blood type O.

In the meantime, he is on autoimmune suppressants to keep the vasculitis at bay, and undergoes dialysis three times a week. “It’s been a lot to take in,” he said. “It’s pretty surreal, from how fast every single aspect of my life has changed so quickly.”

Longtime family friend Debbie Chapman, of Oceanside, who grew up in East Meadow with Katherine Donohue, said she was shocked when she heard about Tyler’s situation. “You don’t think somebody so young is going to need a kidney transplant,” Chapman said. “For all intents and purposes, he was relatively healthy.”

Chapman described Tyler as an “amazing young man.” “He’s thoughtful, he’s kind, he knows a lot about a lot of things, and readily shares that information with you,” she said with a laugh. “He’s really trying to hang in there and have a positive outlook through this whole thing.

Chapman said she applauded the Donohues’ perseverance. “Kathy amazes me,” she said of Tyler’s mother. “It’s a constant battle, a constant challenge to deal with all these different doctors and these different systems, and she’s been able to muddle through all of that. Where other parents might just throw in the towel, she has been his champion — as she has been since he was little, for many things in his life.”

“It’s been a seven-month journey,” Katherine said. “You never realize in a second how your life can change.”

The family’s goal? A kidney transplant for Tyler by December. “It’s a long shot,” he said, “but I think we can pull it off.”