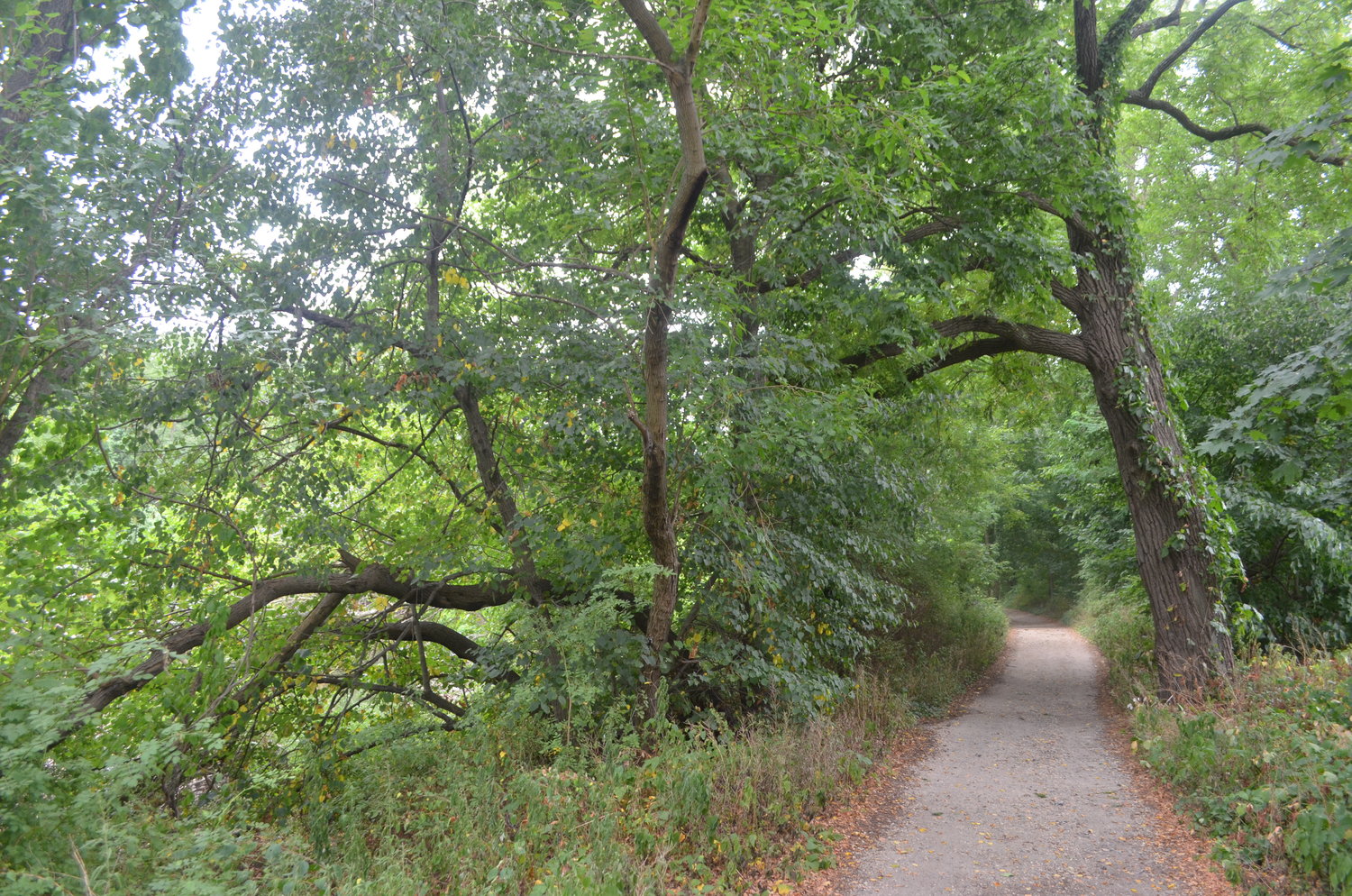 Forest City Community Park, a preserve in Wantagh, has been the site of antisemitic graffiti.
Tim Baker/Herald 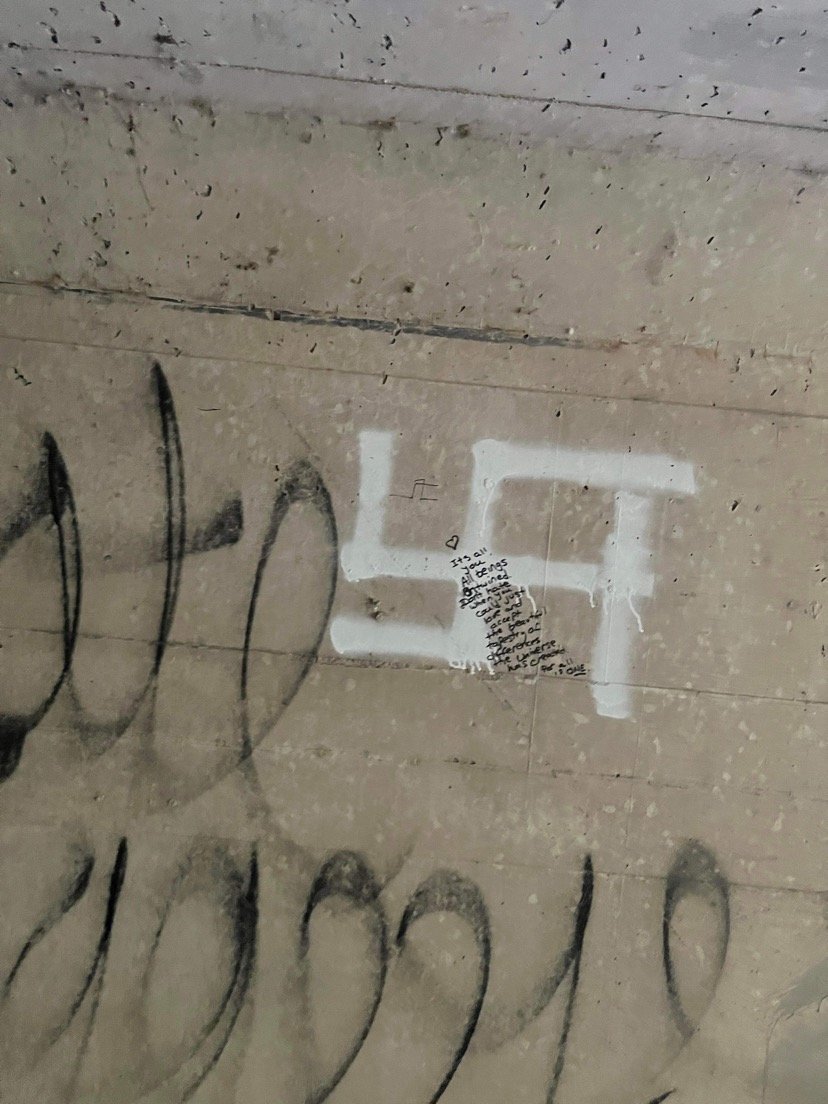 This swastika, along with several racial epithets and antisemitic profanity, was found in a tunnel in Forest City Community Park. A message of love was written over the swastika.
Courtesy of Max Williams
Previous Next

Every time I hear something like this, I think it's important to spread the love.”
Rabbi Shimon Kramer
By Michael Malaszczyk

Max Williams, 23, was horrified when he stumbled across antisemitic graffiti as he sought a fishing spot at Forest City Park Pond in Wantagh last month.

The graffiti included a swastika, anti-American writing, and several racial epithets and other antisemitic profanities, which were located in a tunnel near State Route 105 and the Wantagh Parkway.

Williams, who is Jewish, said he was very upset when he came across the graffiti. “I had family killed in the Holocaust,” he said. “It’s really sad and unsettling that we are still dealing with so much hate today.”

Officials said antisemitism is on the rise on Long Island, as evidenced by recent flyers posted all over Rockville Centre, Oceanside and Long Beach falsely alleging that there is some sort of conspiracy involving the Jewish members of President Biden’s administration. According to the Nassau County Legislature, the neo-Nazi group the Goyim Defense League is behind these allegations.

It is unknown whether the graffiti found at Forest City Park Pond is connected to the Goyim Defense League, officials said.

In April, swastikas and satanic symbols were also found on trees in the park, and in February of 2018, a swastika was found outside a woman’s house on Brent Drive. In 2011, a swastika and hateful messages were found on a footbridge spanning the Wantagh Parkway, from Beltagh Avenue.

Religious leaders across Nassau County have continued to condemn these acts of hate. The Rev. Wasyl Hrynkiw, of St. Vladimir’s Ukrainian Catholic Church in Uniondale, said Ukrainians were also deemed subhuman by the Nazi regime and subjected to forced labor, deportation and death. The Z symbol, currently being used by Russian invaders in Ukraine, is eerily similar to the swastika, he said.

“To fly these symbols is not only anti-Jewish, or anti-Ukrainian, it’s anti-humanity,” Hrynkiw said. “The people who did this are criminals, part of some hateful gang. We stand against them, and with humanity.”

Equally forceful words came from Rabbi Shimon Kramer of the Chabad Center for Jewish Life in Merrick. Kramer was the victim of a hate crime in 1994 when a man, identified as Rashid Baz, opened fire on his car, killing two passengers and injuring another. He said he realizes how hate speech could turn into something much larger and more nefarious.

Kramer said that whoever is behind the graffiti — a malicious antisemitic group or children fooling around — “regardless, the community needs to be aware that this sort of thing is wrong.”

Kramer also echoed Rev. Hrynkiw’s sentiment that this hate could be universal, and non-Jewish residents of Wantagh, Seaford and nearby towns should not dismiss this. “I think history has shown us that hatred always starts with one group,” Kramer said. “It could be the Jews, it could be others, but it never stops. It seeks to destroy our society.

“Every time I hear something like this, I think it’s important to spread the love,” he said.

“Show whomever is responsible that there is a community full of love they are going up against.”

Kramer added that he wants the community to turn this into a positive thing. He suggested the possibility that children from the Chabad Center’s summer camp go to Forest City Park and write over the hateful messages with messages of love.

In fact, written over one of the swastikas at the park was a message Williams found that read, “Don’t hate when you could just love and accept the beautiful tapestry of differences the universe has created. For all is one.”