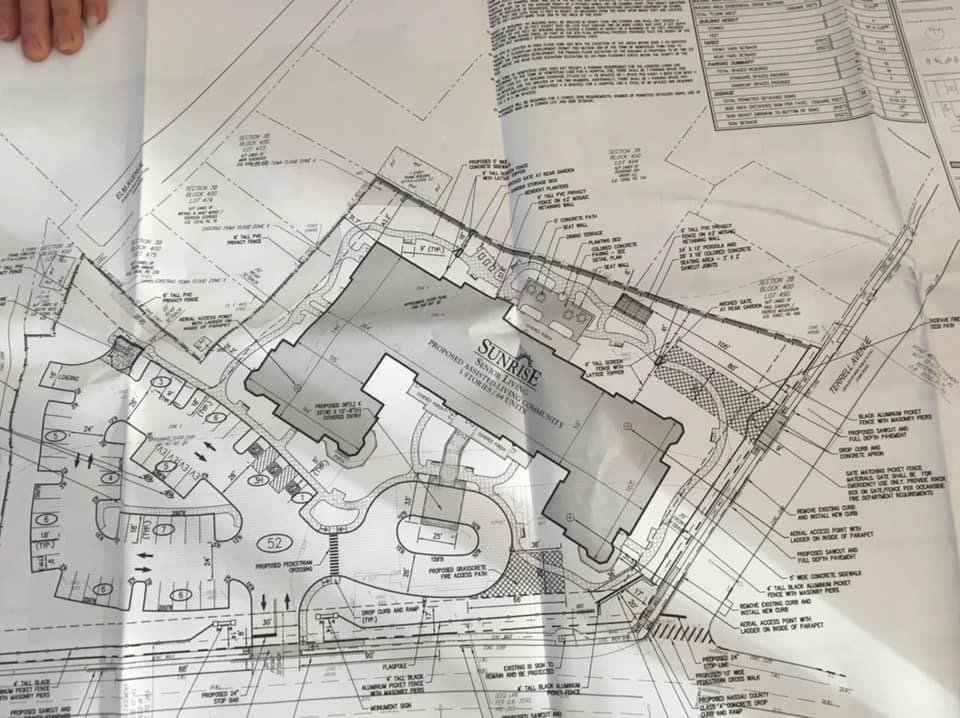 Plans for the proposed construction of Sunrise Assisted Living Center, at Atlantic and Terrell avenues in Oceanside.
Courtesy Joyce Kane 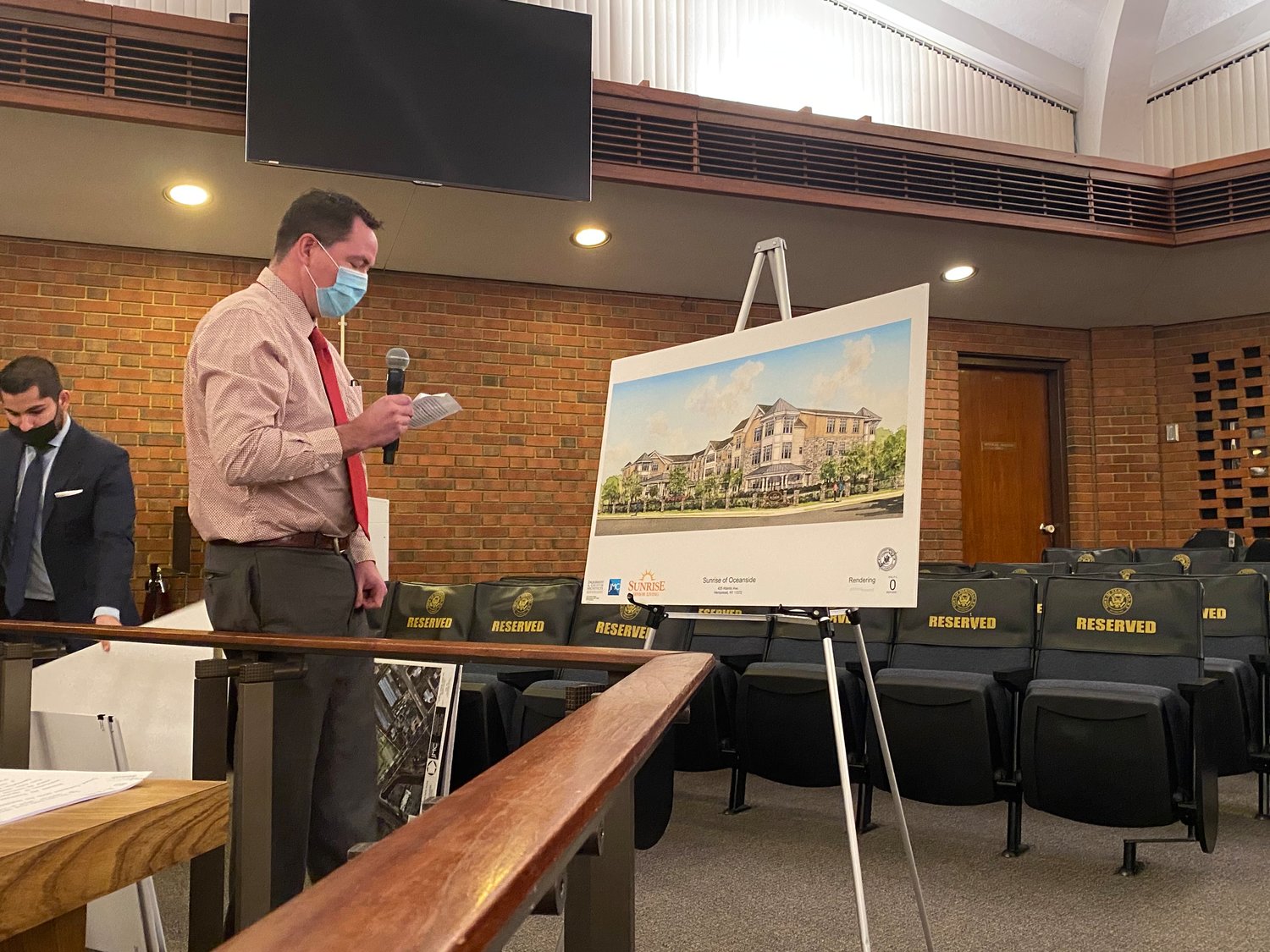 Hempstead Town Hall was the site of a three-hour battle last Wednesday over variances sought for a proposed three-story Sunrise Senior Living facility at Atlantic and Terrell avenues in Oceanside. Attorneys and zoning experts from both sides made their cases to the Hempstead Board of Zoning Appeals for an hour and a half each. The BZA did not reach a decision that night.

Elisabetta Coschignano, Sunrise Senior Living’s legal representative and a partner at the Uniondale-based firm SW/SahnWard PLLC, and a team of experts in real estate, engineering, architecture, traffic and parking made the case for the residential building’s variances. If approved, a retaining wall with a fence varying in height from six to eight feet, two nine-foot-tall arbors, three detached monument signs and a pergola would be installed at the site.

“If approved, this facility will serve the needs of the aging population in the Oceanside community with the ability for residents to continue to remain in their local community while receiving the specialized care and attention they need,” Coschignano said. The center’s third floor would provide memory therapy for residents.

Andrew Villari, a traffic and parking expert for Sunrise and project manager at Stonefield Engineering & Design, argued that since virtually no residents of assisted-living facilities drive, there would not be a significant increase in traffic. Villari cited Sunrise’s other two facilities in East Meadow and North Lynbrook for comparison. Each has 48 parking spots, while the Oceanside site would have 52 to accommodate 125 full-time employees, who would work in shifts of 25.

Philip Kroskin, the Sunrise senior vice president of real estate, said that based on the other Sunrise locations, about half of employees take public transportation to work.

Andy English, project manager at EGA Architects, and Kroskin said the building’s mechanical equipment would be housed in a well on the facility’s roof to prevent the structure’s height from exceeding 49 feet.

Hempstead Town code allows for buildings over 30 feet in lots with two or more acres and a lot depth of more than 100 feet.

Attorney Robert Litt, of the Litt Law Group in Rockville Centre, used architect Monte Leeper, of Oceanside, who is a Herald columnist, and real estate appraiser Mark Davella to argue against the variances on behalf of the Oceanside Development Group, which purchased residential units at the rear of the proposed Sunrise project.

Litt said he believed the proposal would hurt local property owners, touting a Change.org petition against the variances, with 460 signatures of local residents. The residents listed the building’s height, worries about a change in the neighborhood’s character and traffic concerns at School No. 2 on Terrell Avenue.

Davella said all homes within a three-block radius of such a major commercial property would see their values decline. “Any certified appraisal will recognize that a new proposed development is a negative impact on the quiet enjoyment of the neighbors,” Davella told the board. “Secondly, in a tax grievance challenge, it will note the negative impact for a hospital, day care, church, synagogue or other quasi-industrial applications.”

Chris Pearsall, 34, an attorney and Oceanside resident, voiced his worries about the building and others like it during the hearing. “How does a 50-foot tall building fit into the surrounding area?” he told the board. “Our home isn’t our home anymore.”

Janet Pearsall, 62, Chris’s mother, discussed her concerns over congestion in the area. “I chose to live here,” she said, “because it was quiet like Merrick,” where she grew up. “The noise and congestion filters into the neighborhood when the traffic is a disaster at the corners of Lawson Boulevard, Atlantic Avenue and Rockaway Avenue, which causes my neighborhood and my street to be a cutover to avoid that intersection.” Pearsall said she believes the project would only exacerbate the issue.