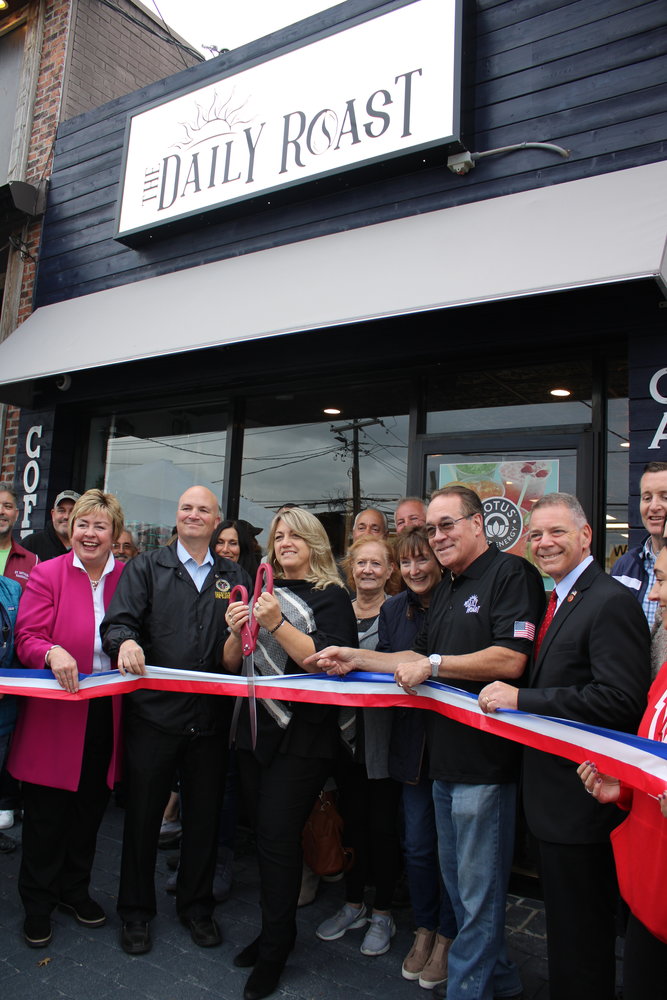 The quality and freshness of coffee beans. Coffee production, grind and temperature. These are all ingredients of the perfect cup of joe, Wantagh resident Bobby Gayer said — but his four decades in the coffee production industry doesn’t hurt, either.

Locals can now taste cups crafted by the coffee connoisseur at his new café, the Daily Roast, at 1887 Wantagh Ave. The shop officially opened on Nov. 13.

“Coffees follow the same taste profiles as wines,” Gayer, who grew up in Bethpage, explained. “You can’t just say, ‘I’m a coffee roaster, I’m opening up a shop.’ It’s an art, and it takes years to understand. I’m grateful I’ve been able to develop that, and I have a very good palette as a chef.” He is also the executive chef of The Murph’s Famous Bloody Mary Mix and caters private events on Long Island.

“Bobby has a passion for coffee unlike anyone else I’ve ever encountered,” Gayer’s longtime friend Marty Piazzola said with a laugh. “He’s been living and breathing this for many years — coffee is in his DNA. His nickname is even Bobby Beans.”

Gayer, a Wantagh resident for 32 years, said he acquired two espresso machines for the cafe to attain “accuracy and dead-on precision,” so every cup is served is the same. “I want my customers to have consistency,” he said.

The cafe is full of personal touches, including Gayer’s father’s toy train (which alludes to the shop’s “Commuter” house blend); a portrait of Saint Drogo of Sebourg, also known as the patron saint of coffee shops; and a coffee cup-shaped sign that reads “Yes You Can,” given to Gayer by one of his daughters, Brittany, before the cafe opened.

His family — his wife, Diane, Brittany and her sister, Stefanie — were huge supporters before and during the opening process. Gayer signed the lease for the space in February, and began renovating it in March.

“I couldn’t be happier for my dad, since he gets to combine his love of making friends and excellent coffee at the Daily Roast,” Stefanie said. “I’m so proud of what he’s started, and can’t wait to see the business grow.”

And the inspiration for the space? “I wanted it to be European, but make it my own,” Gayer said. His family helped him select the blue and gray tones of the interior. One wall is decorated with a mural by artist Arlene Mcloughlin, who also designed the Dia de los Muertos mural inside the nearby Wantagh’s Dirty Taco and Tequila. The mural of the Wantagh State Parkway features bicyclers and beach-goers, as well as the Navy Blue Angels, who fly over Jones Beach State Park every other Memorial Day weekend.

Gayer, whose father served in the Army, enlisted at age 17, but was put on medical leave after preliminary training because of a hernia. The cafe also features a wall honoring first responders, who have been active during the pandemic.

Gayer, who is a member of the Wantagh Chamber of Commerce and raised his daughters in the hamlet, said he has been grateful for the positive feedback from the community. “Wantagh, Seaford and even Merrick — we’re all great neighbors,” he said. “We have a really tight-knit community.”

In the coming weeks, the cafe will be serving fresh-baked pastries daily. Gayer aims to eventually host educational classes about coffee, and to host a holiday turkey drive this season. “You’ve got to give back,” he said. “I look at life as a pizza: If I can get a few slices for myself, I’ll be happy. I don’t want the whole thing — otherwise I’d get sick.”