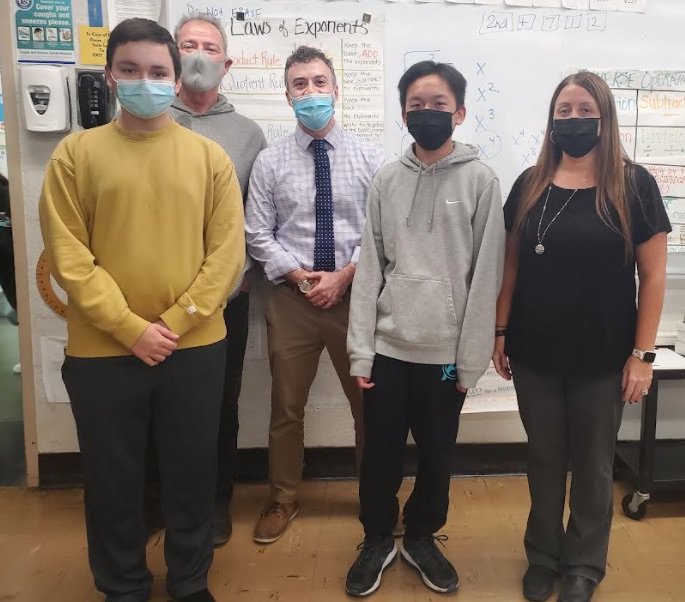 At Merrick Avenue Middle School students Ryan Kenny and Jason Lin have been accepted into the Institute for Creative Problem Solving at SUNY Old Westbury. It is highly selective program for advanced middle school mathematicians who are looking to challenge themselves and learn skills not taught in the traditional classroom.

“The Institute of Creative Problem Solving is a problem-solving enrichment program,” said David Prince, the Bellmore-Merrick Central High School District’s math chair. “It’s for students looking to challenge themselves and go above and beyond what is taught here at Bellmore-Merrick.”

District students are given the opportunity to take an American Math Competition test in seventh grade. Based on how they score, they can be nominated by a teacher to submit an application for the SUNY Old Westbury program, according to Prince.

“It has been one of the most competitive and gifted programs in the nation,” he said. “The students who were top scorers — we told them about the program, and the rest is history.”

Approximately 700 students apply each year, but only 84 are accepted. There are a handful of programs run by institute, focusing on math, research and robotics. Lin and Kenny are participating in the math program, but will have a chance to take tests to attend the others in future school years.

Lin, 13, of Merrick, told the Herald that at school, he is involved in the science and math clubs, and he also runs track and plays the viola.

“A teacher recommends students with your AMC score,” he said. “I had to write a paragraph about myself. If they approved that, I had to take another test, and then I got in.”

Both students received a nomination from their seventh-grade math teacher, Kenneth Heffernan. The tests for the program were given virtually, late last school year, Heffernan explained. Students were told they were accepted in July, and the class started in September.

Every Saturday from 9:15 to 11:45 a.m., the students attend the class at the college. They are taught by different instructors, and take on a different mathematical topic in each class.

“It’s probably one of the highlights of my Saturday,” Kenny, 13, of Merrick, said. He also plays drums and piano, loves art and does a lot of individual research, he said. For fun, he plays basketball, and will also start running track.

“It’s usually professors — sometimes a teacher from high school,” Kenny said of the SUNY program. “But it’s always someone who’s teaching one of the highest-level math classes.”

“It’s been pretty fun,” Lin added. “Last class we did probability — the first class we did locus. It’s pretty challenging, the program. But I like being in it.”

A typical Saturday, as described by both Lin and Kenny, involves being introduced a new topic, followed by individual and group work. “We start by being given a problem — no context,” Kenny said. “After a good amount of people solve it, we come together as a class and talk about how we solved this problem.

“It’s all about different math skills and problem-solving,” he added. “Sometimes you may be learning about prime factors, and other times locus points.”

The AMC test is given every year, and anyone can take it. There is one test for those up to eight grades, and others for students up to grades 10 and 12. The class that Lin and Kenny attend has roughly 30 students, most of them fellow eighth-graders from other schools. The program will conclude next March.

“After this year, I can go onto other programs — there are ones for research and robotics,” Kenny said. “For me personally, I would want to try to get into those programs. They seem interesting, and would really challenge me.”

In order to be admitted to those programs, students already have to be attending a program run by the institute, and take additional entry exams.

At Bellmore-Merrick, Lin and Kenny are on an advanced math track, meaning that last school year they learned both the seventh- and eighth-grade math curriculums. This year they are both enrolled in Algebra 1, a high school-level state Regents class.

“They’re in the most rigorous math program that we offer here in Bellmore-Merrick,” Prince said. “We’re really proud of these students.”