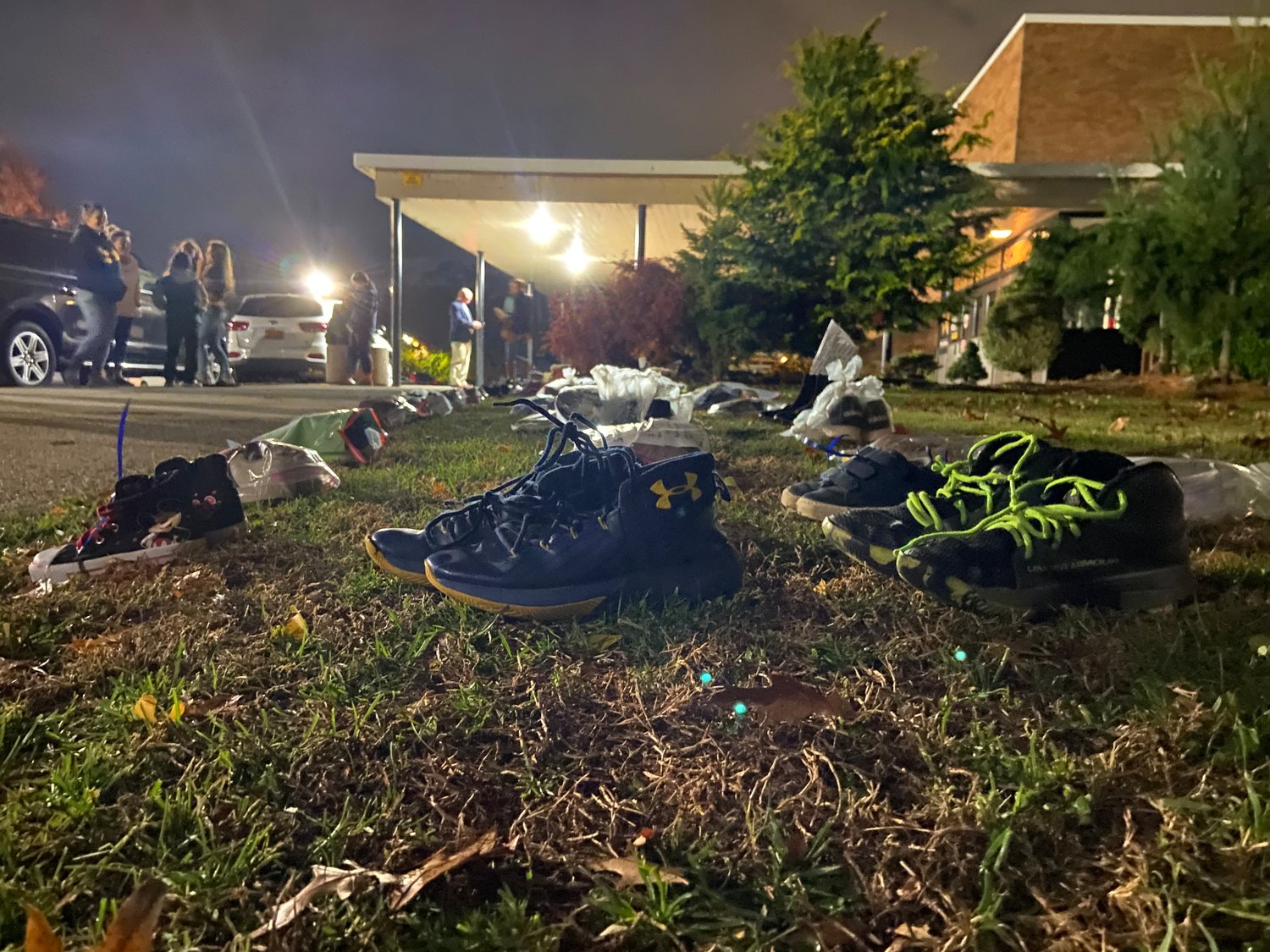 Shoes were lined up outside Wantagh High School on Nov. 18, part of a statewide movement called Operation Shoe Drop. The Wantagh drop-off took place prior to a Board of Education meeting.
KATE NALEPINSKI/HERALD 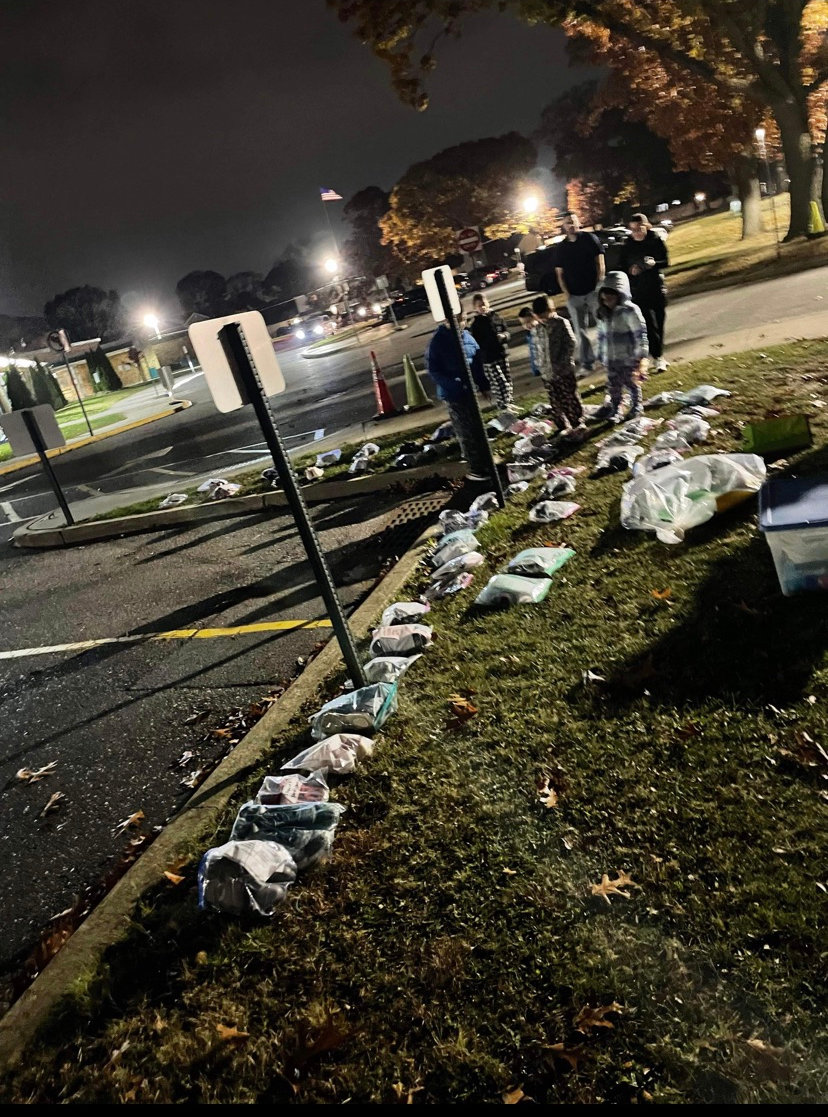 Parents and students dropped shoes off at Seaford Manor School on Nov. 18.
Courtesy Matthew Roberts
Previous Next
By Kate Nalepinski

“Fight for my mommy’s right to choose!” one sign read.

“We love our freedom of choice,” another stated.

“Families should NOT have to choose between public school and the shot,” another read.

These statements were emblazoned on some of the many signs outside Wantagh High School and Seaford Manor School on Nov. 18, when district parents and children spread more than 70 pairs of children’s shoes around school grounds to make a statement about potential Covid-19 vaccine mandates in schools.

More than 50 districts on Long Island — and many others across the state — took part in Operation Shoe Drop last week, the movement’s founder, Kimberly Boyette, of Merrick, told the Herald. The shoes served as a visual representation of the children who may be pulled out of school in the event that the vaccines are made mandatory.

A new bill in the State Assembly would mandate immunization for attendance at all public and private schools, and would authorize the state health commissioner to develop and supervise the rollout of a school vaccination program. The bill is currently under review in the State Senate.

In an effort to raise awareness of the bill, the shoes were collected and dropped off at the office of State Sen. John Brooks in Massapequa on Nov. 19. Brooks, from Seaford, represents the 8th Senate District, which encompasses Wantagh and Seaford. The shoes were then donated to a South Shore-based drive, Boyette said.

“We’re all here for the same reason: parental choice,” district parent Lisa Schreiner said at the gathering last Thursday. For Schreiner, that means choosing whether children wear masks or get the vaccines.

Schreiner said that her children — an 11-year-old at Wantagh Middle School and a 7-year-old at Forest Lake Elementary — have had difficulty focusing in school while wearing masks, as required. And children struggle to pick up on social cues when everyone wears masks, she said. “Children don’t know if the teacher is angry [or] if she’s frustrated because [her] face is covered,” Schreiner said.

“We need parental choice,” Boyette told the Herald, adding of the vaccines, “It’s only been around for less than a year. If a person wants it, that’s great. I’m so happy that people who want it can get it, but I don’t want it, and I don’t want my daughter to have it, because I don’t know the long-term effects.”

Wantagh resident Kevin Henshaw said he discovered the high school drop-off event on social media, and was eager to participate. “We’re here to support the move not to have mandatory vaccinations for kids in school, and to get these kids from wearing masks every day,” he said. “It’s been two years now — that’s a long time.” Henshaw noted that his youngest daughter, who is 5, has never experienced a school environment without a mask.

The movement comes less than a month after the Centers for Disease Control and Prevention authorized the Pfizer BioNTech Covid-19 vaccine for children ages 5 to 11. The pediatric vaccine — one-third of the adult dose — quickly became available to local doctors’ offices and pharmacies, leaving parents to decide whether to have their children vaccinated.

The 10-microgram Pfizer-BioNTech vaccine for children is administered in two doses, three weeks apart. Those 12 and older receive a 30-micrograms shot. According to the Food and Drug Administration, in clinical trials, side effects were mild, and similar to those seen in adults.

In a tweet last week, Gov. Kathy Hochul in a tweet stated, “If we want to get to the point where we don’t need masks in schools especially — we need to get through the holidays without a spike.” Hochul added that if there were no spike, she would advise the state Department of Health to research ways to relax measures, including masks at schools.

Henshaw said that he had taken the vaccine, but would prefer if it weren’t mandated for his kids. “I don’t mind getting it as adults,” he said. “But with the kids — and not knowing what the future holds for them with this medicine — it’s frightening.”