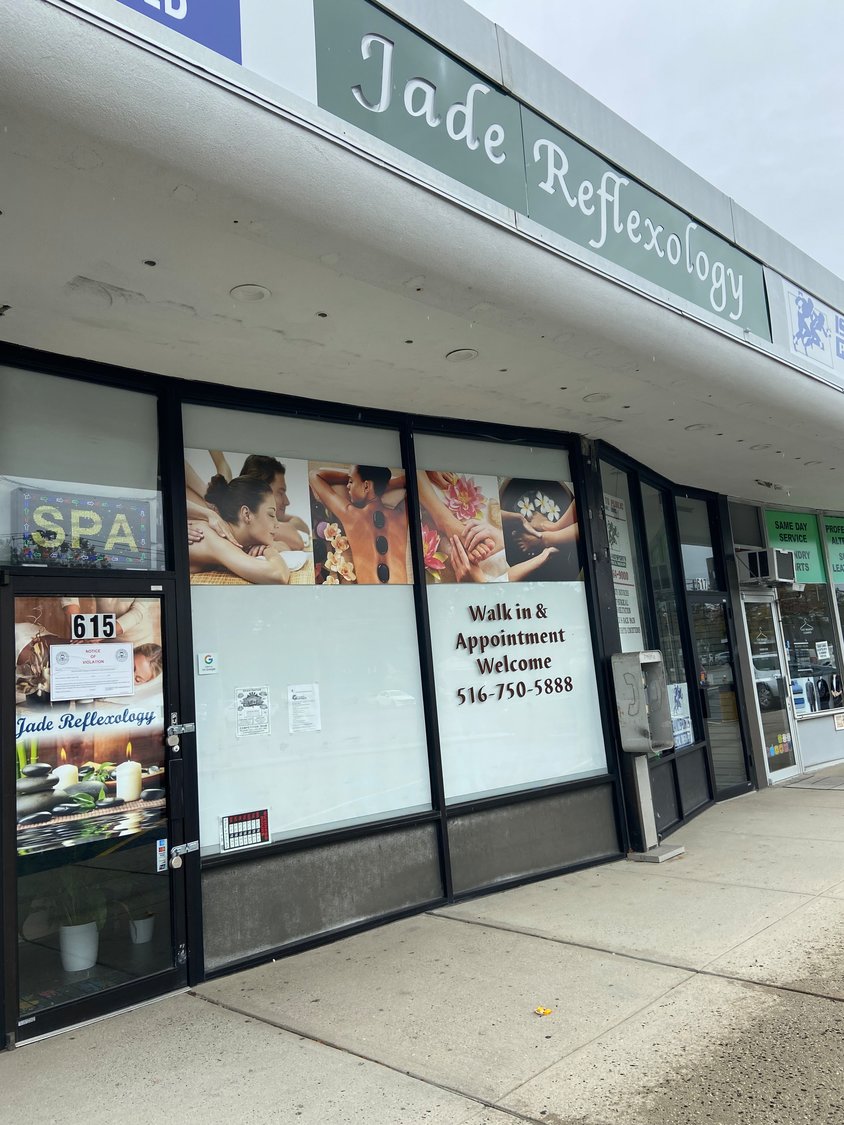 If you break the public’s trust by promoting illegal activities, we are going to find you.”
Christopher Carini, councilman, Town of Hempstead
By Michael Malaszczyk

Two local foot spas and massage parlors have been shut down for allegedly promoting prostitution and illegal massages — and several others are under investigation — while police have charged two suspects with carrying out illegal activities, officials said.

According to Nassau County police, two suspects, identified as Xiaojing Gao, 39, of Rego Park, Queens, and Lijuan Zhao, 37, of Flushing, Queens, were arrested for performing illegal massages and prostitution at the Seaford location. Both suspects were charged with unauthorized practice of a profession, with Zhao facing an additional charge of prostitution, authorities said. Both appeared in First District Court in Hempstead on Oct. 6.

County police and elected officials said they suspected that the parlors’ illegal services were  connected. Town Supervisor Don Clavin, Councilmen Anthony D’Esposito and Christopher Carini, and County Legislator Steve Rhoads have led the charge against these businesses. State Sen. John Brooks has also spoken out strongly against the alleged crimes.

Clavin praised Nassau police for their efforts in attempting to stop the alleged practices.

“I am happy that we have managed to close these illicit businesses down so they no longer can pollute our community’s downtown corridors,” Clavin said. “I am proud of the partnerships my colleagues and I on the town board have fostered with our partners in government from Nassau County, and I am especially grateful for the dedicated work of our Town of Hempstead Building Department staff and the members of the Nassau County Police Department for getting this done.”

D’Esposito, a former New York City police officer who is running against Laura Gillen to replace Kathleen Rice in New York’s 4th Congressional District, said that while he is running for a federal office, he still cares deeply about the integrity of business in the Town of Hempstead.

“My colleagues and I on the town board will not falter in our commitment to safeguarding the suburban aesthetic of the Town of Hempstead,” D’Esposito said. “We will not allow malcontents peddling in illegal practices like prostitution to pollute our communities with their activities. I will continue working alongside my partners at all levels of government to ensure this blight does not spread here in our hometown.”

Gillen spoke out as well, mentioning how in her tenure  as town supervisor she worked to root out these kinds of issues.

"As town supervisor, I worked around the clock with law enforcement to make sure that our communities were safe," Gillen said. "We worked together and were able to identify and root out illicit behavior very quickly before it became news. It's clear that the Town of Hempstead needs to do a better job listening to their residents, who are the true eyes and ears for this sort of activity."

Carini, who is also a former New York City police officer, said he feels that these businesses have violated a public trust. Carini said he is also proud of the work Nassau police have done in shutting these facilities down and making arrests.

“Here in Hempstead Town, if you break the public’s trust by promoting illegal activities like these ‘massage’ parlors were doing, we are going to find you out and shut you down,” Carini said.  “Whether it be my time serving in law enforcement as a member of the NYPD and Port Authority Police Department or during my tenure on the Hempstead Town Board, my career has consisted of stopping lawbreakers from wreaking havoc on our community — and that includes these illegal parlors.”

Rhoads, a longtime member of the County Legislature serving in the 19th district, is running against Brooks for the seat in the newly mapped 5th State Senate district.

“We will not be deterred from enforcing Nassau County’s zero-tolerance policy against this type of lewd behavior,” Rhoads said. “I will continue working with community groups, local leaders and law enforcement to battle the growing pandemic of lawlessness affecting our communities and quality of life.”

Brooks has served as a state senator since 2017, representing numerous towns in both Nassau and Suffolk, and is seeking to remain in his redistricted seat.

“I was disheartened to learn about the nefarious activities occurring at some of our local massage parlors,” Brooks said. “When you establish a business anywhere, you agree to uphold the values and laws of the community that you serve. Through these careless and illegal activities, these businesses have shown that they do not share the values and beliefs of our Long Island. I am therefore very grateful for the tireless work that was, and still is, being undertaken by the Nassau County Police Department in bringing these crimes to light.”

Anyone with information on any more illegal activities is urged to contact the Nassau County Police Department at (516) 573-8800. All calls will be kept strictly confidential, police said.