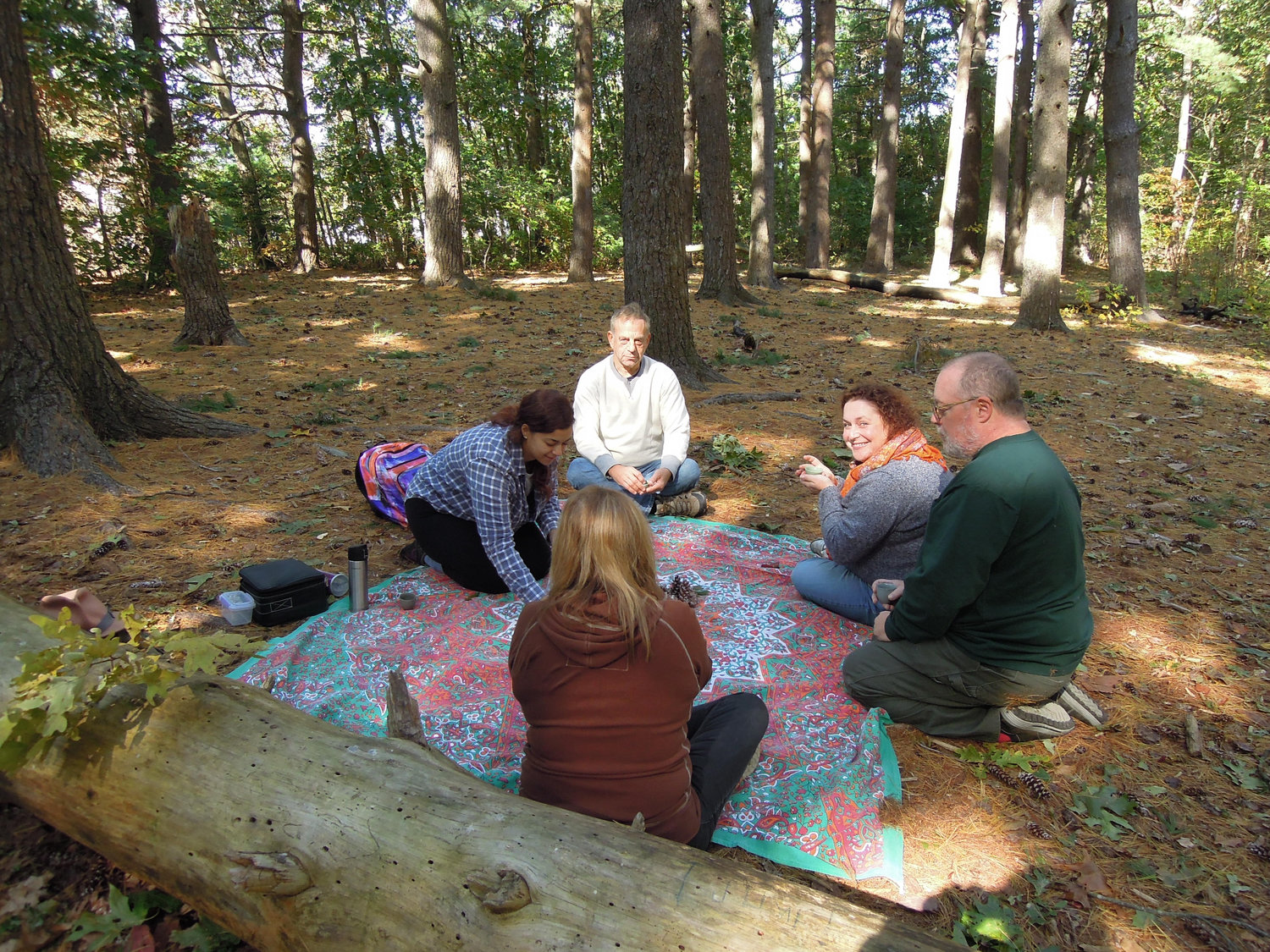 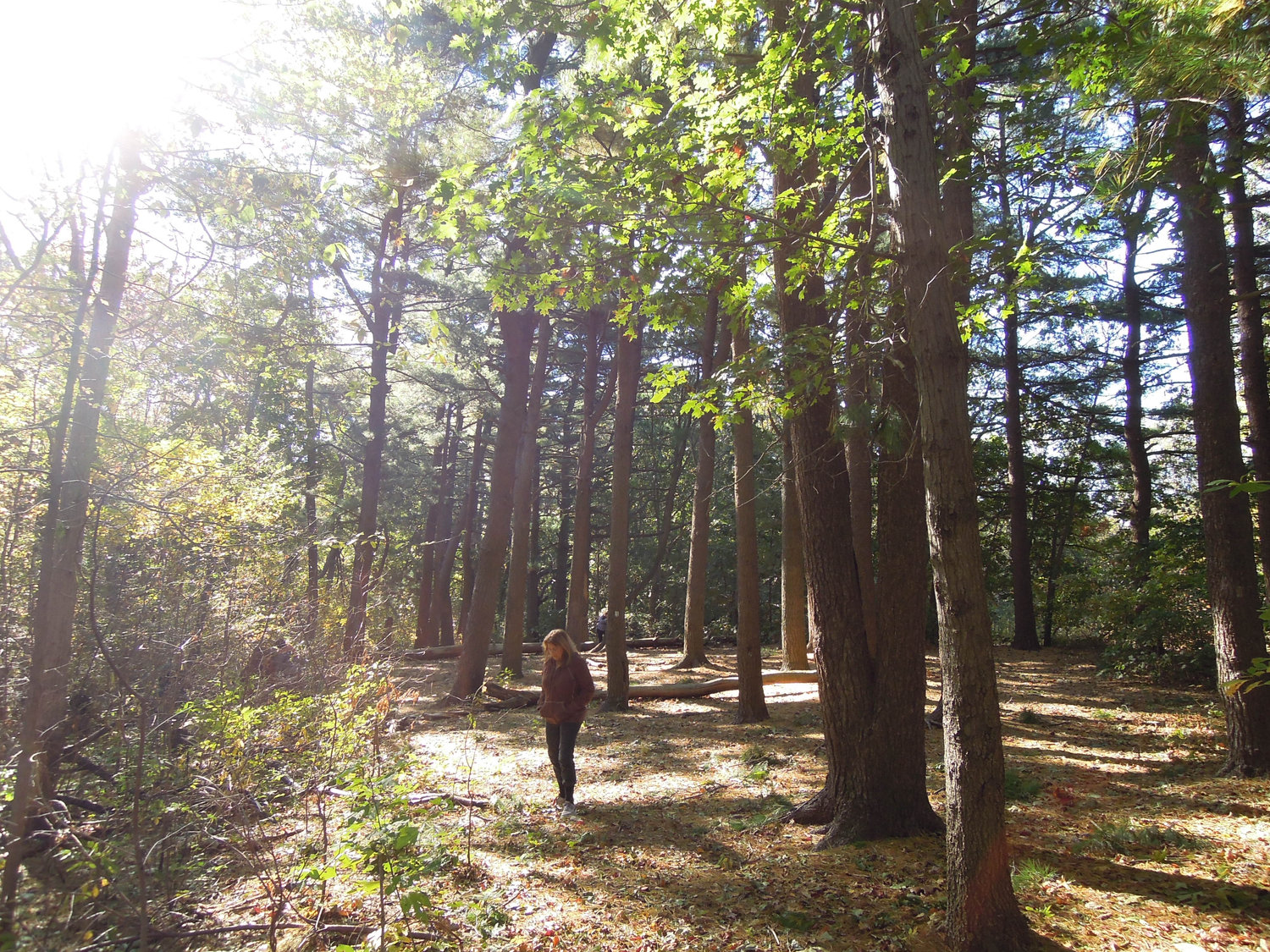 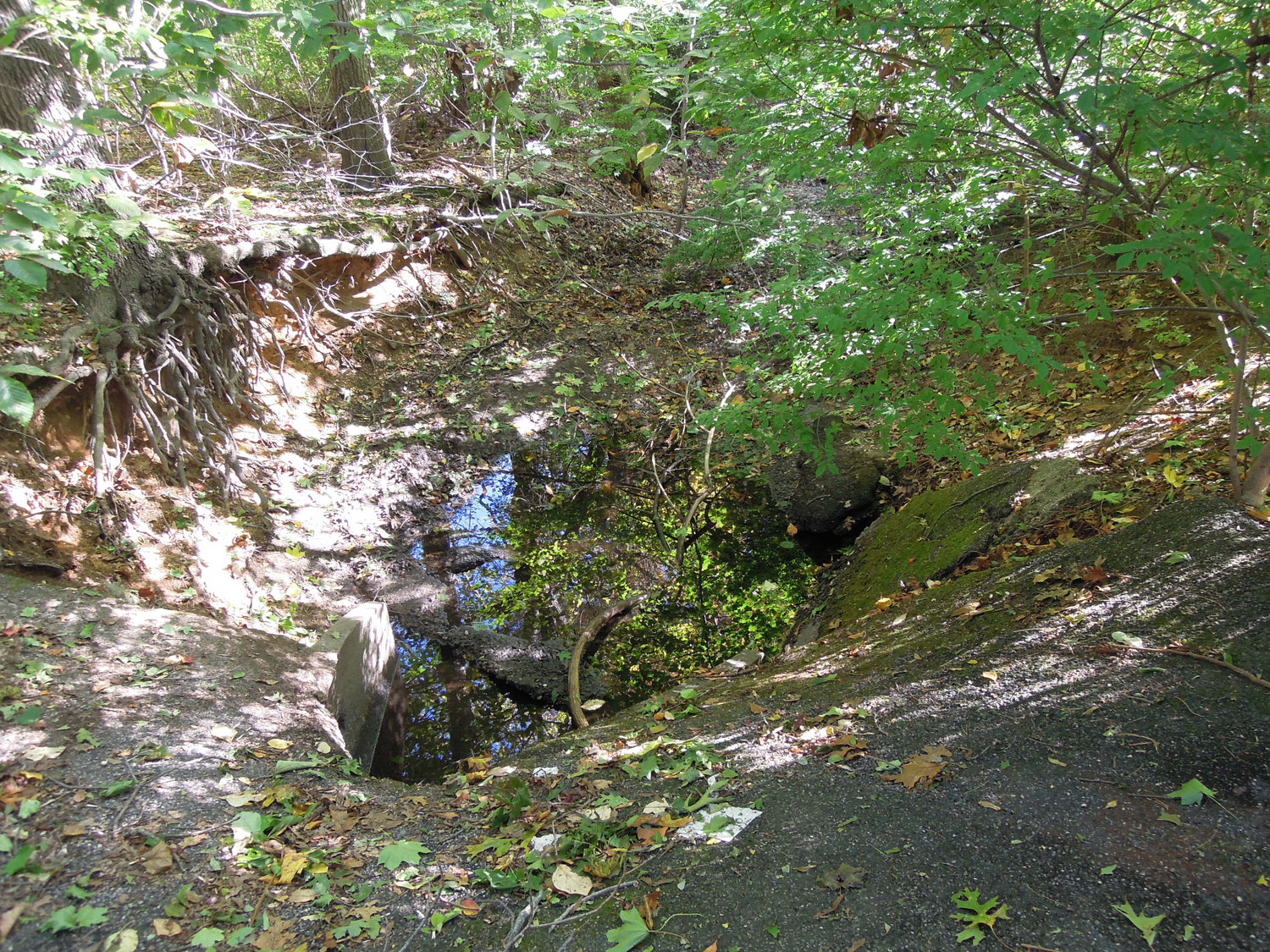 Pools of water, bushes and majestic pines made the Takapausha Preserve a perfect location for “forest bathing.”
Timothy Denton/Herald-Citizen
Previous Next

We’re usually too busy to notice these sensations in our everyday lives.”
Stephanie Gaglione, Shinrin Yoku teacher
By Timothy Denton

Five strangers gathered last Saturday at the entrance to Takapausha Preserve, the wooded 84-acre enclave that stretches between Seaford and Wantagh. They were about to take their first “forest bath,” under the direction of guide and certified teacher Stephanie Gaglione, a pharmacist trained in the tradition of shinrin yoku.

Not literally a bath, the term is a translation of three Japanese characters: shin, rin and yoku. The first two translate as “forest,” and yoku means “bathe.” Together, they suggest bathing in the atmosphere, energy or aroma of a forest.

Forest bathing is an adaptation of principles that originated in Japan, Gaglione explained. It draws on teachings that are part medicinal and part religious. In the Japanese Shinto religion, every tree, rock and stream is thought to be imbued with its own kami, or spirit. And Tendai Buddhist practices include walking and running in forests and among mountains, as well as bathing in streams or standing under waterfalls.

Saturday’s encounter with the forest included nothing so strenuous or extreme. It was a means by which participants could become more aware of their senses through encounters with the elements of the preserve, Gaglione explained.

In preparation, they received instructions on tick prevention and appropriate clothing. And the habitat of a forest can be variable, according to Gaglione’s e-mailed preparatory guide, so temperatures, degree of moisture and firmness of the paths could vary widely.

She began the session with a brief description of the way forest bathing has been reshaped as an everyday practice for Westerners. She encouraged participants to be aware of their physical responses throughout the walk — not to try to change those responses, but simply to observe them as they took place. For example, they could notice the feelings in their legs and the variations in the topography of the path under their feet — hard or soft, rocky or smooth — as they walked. “We’re usually too busy to notice these sensations in our everyday lives,” Gaglione said. “Forest bathing gives us a chance to slow down and center our attention,” to more thoroughly experience the surroundings and their impact on the senses.

Group members set out in silence. They stopped at periodic intervals, and Gaglione invited them to share their thoughts or feelings. She urged them to engage all six of their senses — the tradition of Oriental medicine views mental functions as a sense equal to the five physical senses.

The participants shared their observations by using a “talking stick,” a technique adapted from Native American traditions in which only the person holding the stick speaks. A rock, flower or any other object may be used in place of a stick. The point is to encourage active, respectful, engaged listening — which is often short-circuited by habits of multi-tasking or the free-for-all of business meetings. The stick holder may share anything that comes to mind — or simply keep silent before passing the stick to the next speaker.

A sense of time became an early casualty of the walk, because it became difficult to gauge how much time had passed. But after perhaps 20 or 30 minutes, the group came to a large clearing with towering pine trees and log benches. The sunlight streamed through the trees, and the smell of evergreens permeated and the forest’s canopy gave the feeling of a medieval cathedral dominated by majestic columns.

Here, Gaglione guided the participants through a series of invitations to facilitate their exploration of the space and of themselves. First she invited them to examine the fallen leaves strewn about the clearing, and to be open to any feelings of attraction to leaves that they felt characterized their personalities. The offerings included pine branches; plants whose leaves had been devoured by insects, leaving patterns as intricate as lace doilies; and leaves showing the colors of autumn and the decomposition brought on by time and moisture.

Next, Gaglione invited the bathers to explore the sticks strewn about the forest floor, and then the trees themselves. Her instructions were minimal, leaving the participants with a maximum of mental and emotional space with which to ponder the invitations. Each of the invitations lasted perhaps 10 to 15 minutes — again, time was difficult to estimate. The tasks themselves were perhaps less important in each case than the journey to their conclusion. One of the biggest surprises participants reported was the contrast in aromas as they moved through the open space. They said they were often able to discern significant differences by moving as little as a foot or two.

Finally, Gaglione laid out a quilt and a service of tiny jade-colored Chinese teacups, in which she offered pine-needle tea that she had brewed herself. In that way, participants could experience the interior health benefits of the forest as well, since pine needles are high in vitamin C, she said.

As the group shared light snacks, conversation became more general. Gaglione mentioned her work as a pharmacist, and said it is difficult to do more than two of these walks per month.

In fact, she had a second walk scheduled for that afternoon, so the group broke up fairly quickly after the snack. And although the five remained almost as much strangers to one another as they had been in the beginning, in another sense, they had shared an extremely intimate experience in the silence of the forest — an experience all agreed they would be eager to repeat.