Recovery groups locked out during crisis

Pandemic is severe test for 12-steppers 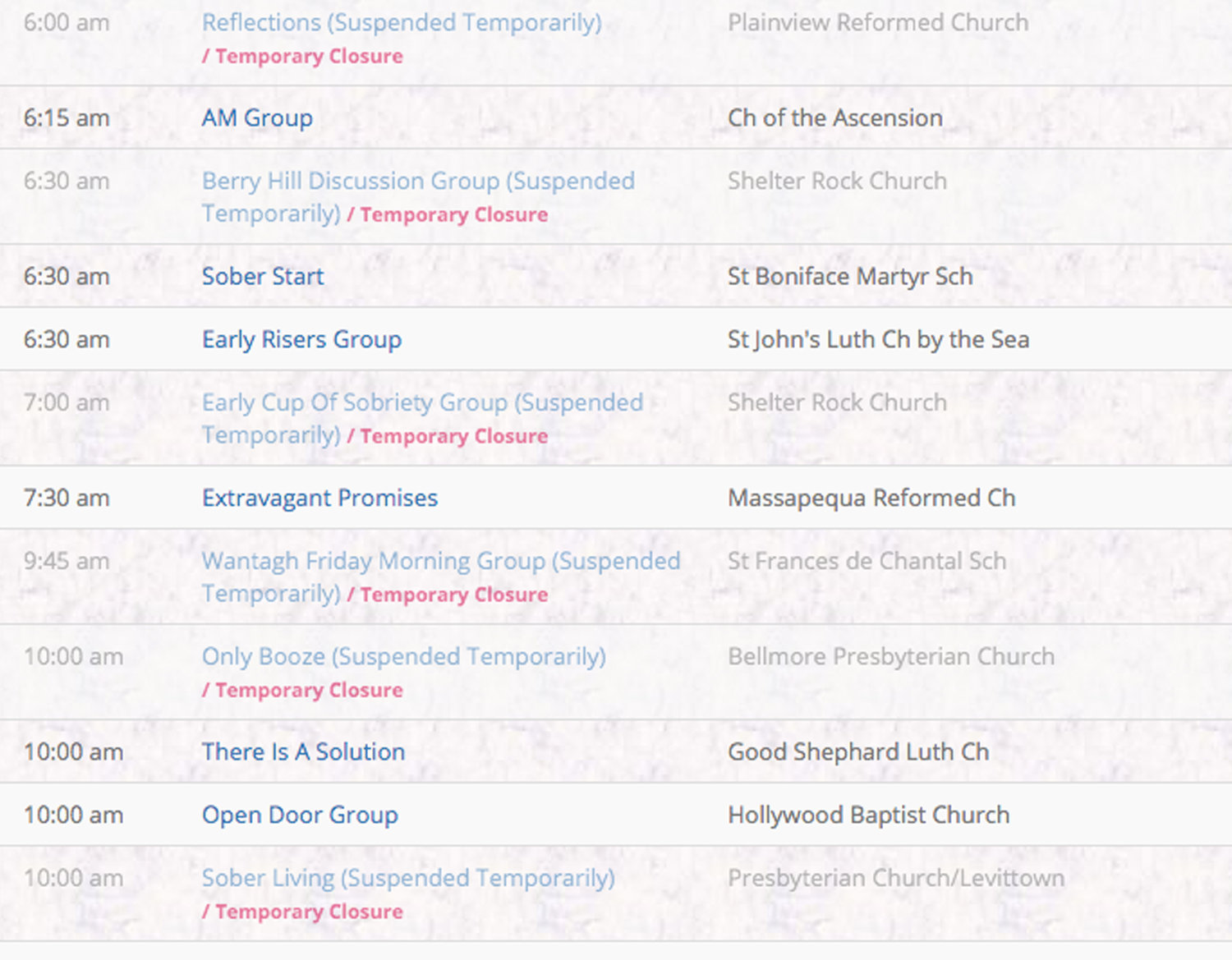 May 12-Step groups have found themselves without meetings spaces following the ban on gatherings of more than 50 people.
Courtesy Nassau County AA Intergroup 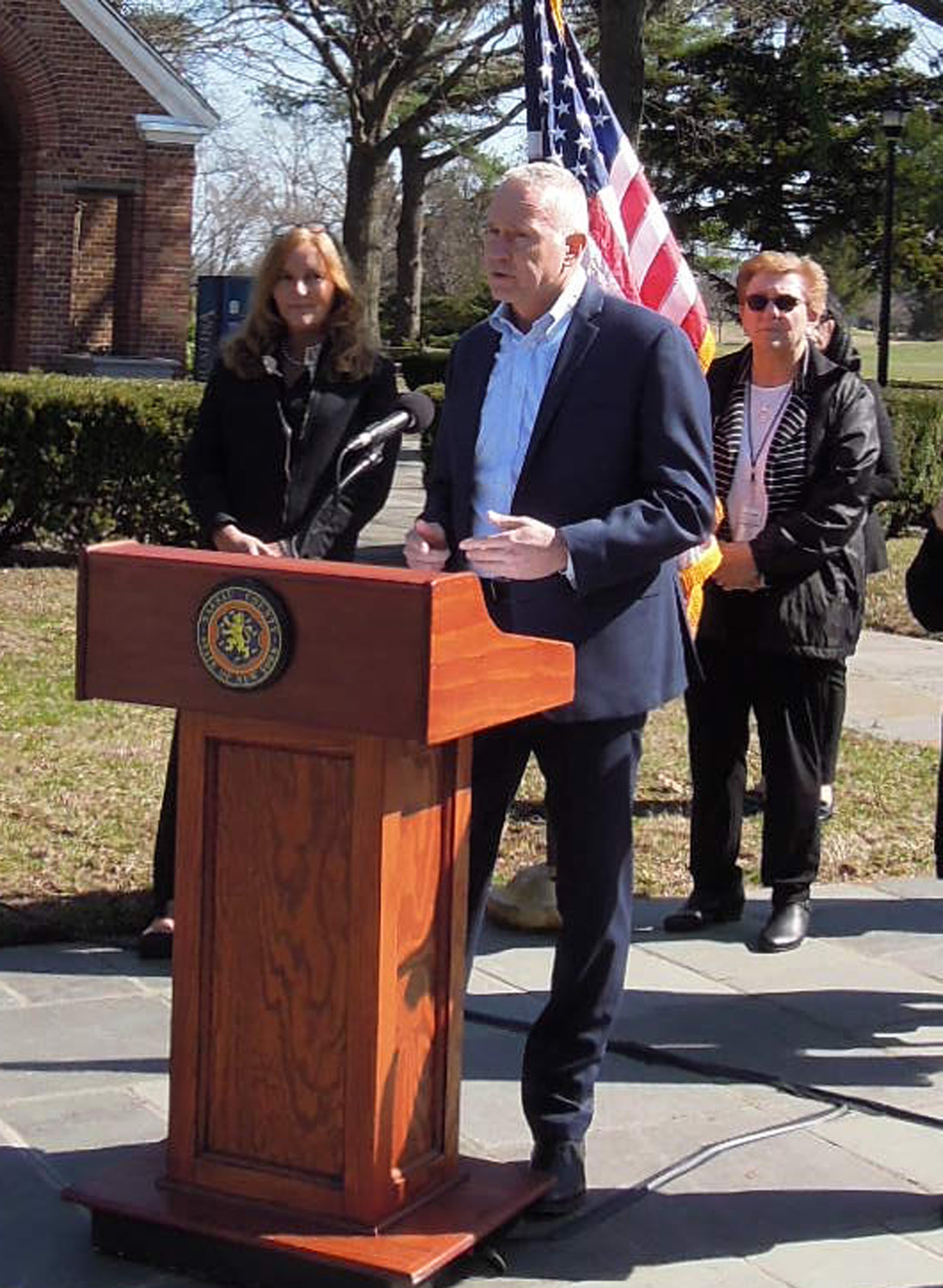 Dr. Jeffrey Reynolds, chief executive officer of the Family and Children’s Association, said that stockpiling by addicts had led to a marked increase in overdoses.
Timothy Denton/Herald-Citizen 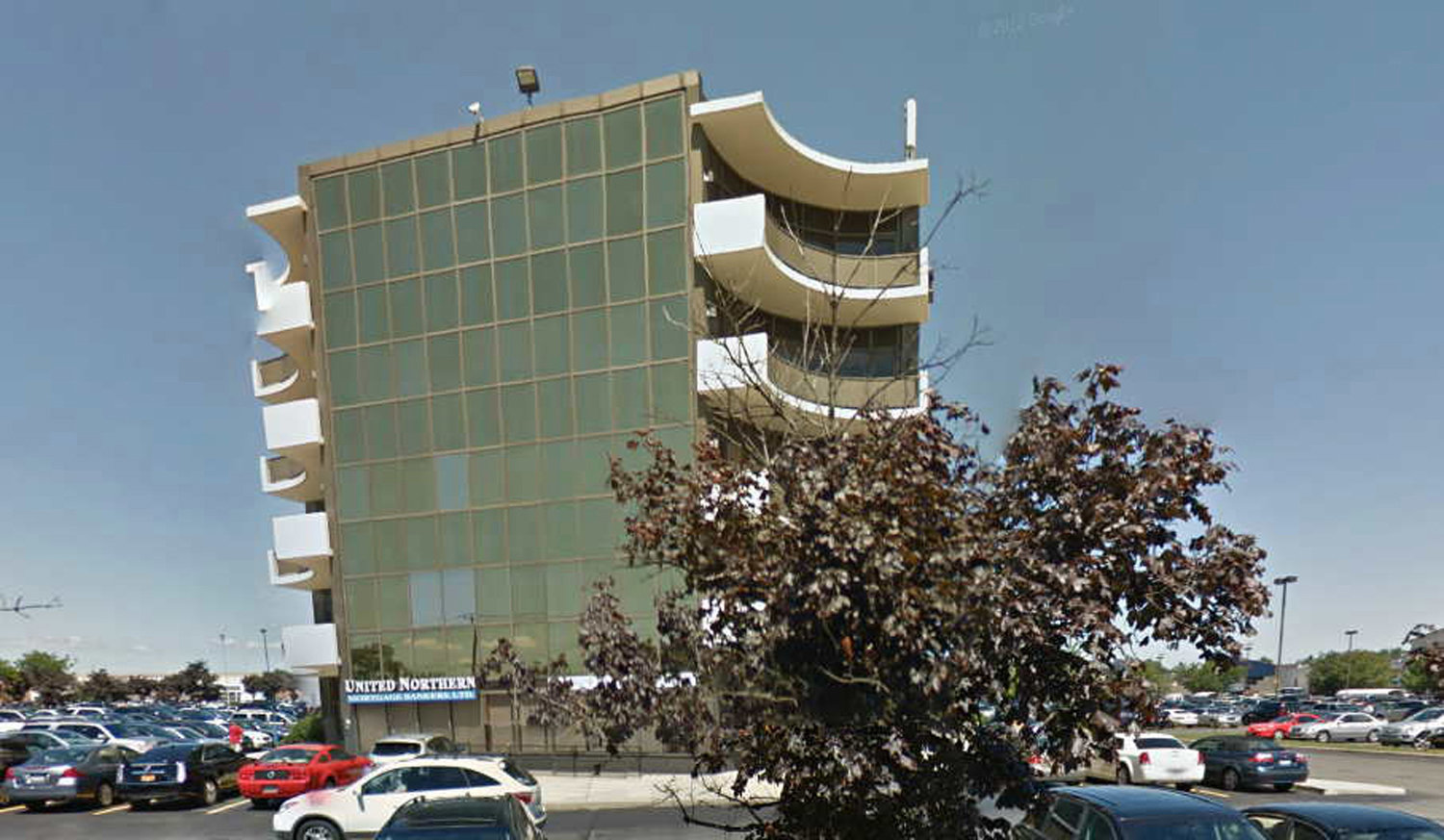 A lot of what we do can be done by phone. We’ve been . . . working this week to set up teleconferencing for our group sessions.”
Susan Klein, Program Director, Souteast Nassau Guidance Center
Laura Curran's mental health tips

Keep a regular schedule. If you work at home, maintain a professional, businesslike attitude during your normal work hours.

Limit your news intake. Too much exposure to bad news can cause or worsen depression or anxiety.

Exercise. Parks are open, and the weather is warming up.

Be kind. Look for opportunities to help one another. “If you bought too much toilet paper, and your neighbor doesn’t have any, give them a couple of rolls,” Curran advised. “It’ll help both of you feel better.”

The Intergroup office is closed, but it is maintaining 24/7 phone service via call forwarding.

While many agencies across the state and county are focused on the physical and financial impact of the COVID-19 virus, the mental health of the county’s 1.36 million residents is just as critically important. And recovery groups of all kinds have felt the impact of social distancing and closed doors more than most.

Speaking at a news conference in Eisenhower Park on March 19, Nassau County Executive Laura Curran referred to the difficulties faced by recovering addicts of all varieties who had mainly been using schools and churches for meeting places, until Gov. Andrew Cuomo’s declarations limiting the number of people who could meet in one place. But many venues had already closed their doors to outside organizations.

“None of my regular meetings are happening now,” said one longtime AA member who attends weekly meetings in Seaford, Wantagh, Levittown and Bellmore. “I found one in Wantagh that I hadn’t been to before, but it’s been suspended now, too.”

In normal times, Nassau County has more than 700 AA meetings a week, with about 30 in Seaford and Wantagh.

Other recovery groups besides AA have been similarly hard hit.

Meetings are a key tool for many recovering addicts and are especially important for those just beginning to live without their substances of choice. “I’m really worried about the people just coming out of rehabs or treatment centers,” the AA member said. Like many in the various fellowships, he requested that his name not be used. “They’re the most vulnerable, and the tools of recovery are new to them and pretty confusing. Without a regular support group, and especially with the extra stress of the coronavirus, I think a lot of them are going to have a rough time.”

Groups have coped in a variety of ways, he said. Some smaller groups have sought out alternative venues, including parks. Others have set up conference calls or meetings via Google Hangouts or Skype. The various fellowships’ local websites contain information on call-in numbers and access codes.

Dr. Jeffrey Reynolds, chief executive officer of FCA (Family and Children’s Association) echoed both Curran and the AA member’s concerns. The FCA sponsors programs for recovering addicts and has shelters throughout Nassau County, including one in Wantagh.

Reynolds, whose organization has weathered many major crises in its 135 years, from the global Spanish flu pandemic of 1918 to Hurricane Sandy, said his chief concern was the speed with which mental health issues have arisen, as well as their severity. “With Sandy, it took a couple of weeks before we began to see some of the things we’re seeing now after just a few days,” he said.

Residents are hoarding not only toilet paper and ground beef. “Addicts are hoarding heroin,” Reynolds said. The problem, he said, is that “they buy enough to last them for a week and end up doing it all in a weekend.” The result has been a spike in overdoses. According to the state Department of Health, the opioid crisis in Nassau County has “significantly worsened” since the beginning of the year, with 6.5 overdoses per 100,000 residents.  “And this was already ground zero for the opioid crisis,” he said.

People with prescriptions for pain medication face similar fears, Reynolds said, adding, “Many turn to alcohol as the most effective alternative.”

Treatment centers were encountering unforeseen difficulties as well. “A large part of our population has been mandated to us by the courts,” said Susan Klein, program director at Southeast Nassau Guidance Center in Seaford. “They’re worried they won’t have access to the lab facilities or other ways of maintaining compliance.” Failure to do so might expose such clients to legal penalties, since treatment has been ordered in some cases in lieu of fines or jail time.

The guidance center is an outpatient facility with offices in Wantagh and Levittown, as well as Klein’s Seaford facility. “A lot of what we do can be done by phone,” she said. “We’ve been doing individual counseling by phone, and have been working this week to set up teleconferencing for our group sessions.”

Despite the challenges the spread of coronavirus has created Nassau County’s mental health services remain open for business,.

Some personnel have been sent home, Curran said, but “all our desks are staffed” at the Department of Social Services. Departments are still in the process of making the adjustments necessary to protect clients and employees, but every department is prepared to support the needs of county residents, she said.

In the interim, the county was in the process of working out alternatives to procedures that, according to state law, mandated face-to-face meetings. And Medicare agreed last week to extend coverage for mental health providers via telemedicine, she said — a first.

Even for those not dealing with directly with mental health issues like addiction, the contagion has caused high levels of anxiety and stress. Curran emphasized the need for stability in the face of the disruptions of work and personal schedules that many now face as they transition from office, school or job site to home. “Keep a regular schedule, and stick to it,” she suggested. “Working from home can lead to anxiety. When family members distract you, just say, ‘I’m at work.’”

Curran also recommended exercise, especially in any of the county’s numerous parks. Parks are not only ideal locations to practice social distancing, she said; fresh air and exercise are keys to maintaining health.

Finally, Curran said that “small kindnesses go a long way” in easing the tensions brought on by isolation and uncertainty.

Nunziata said her department had changed some of its protocols to reflect the need to avoid close contact. Documents will no longer be dropped off in person, for example, but will be deposited in sliding drawers.

But whether residents need food stamps, emergency housing or any of her departments’ services, “We are there,” she said, emphatically echoing Curran’s message.

Perez advised residents to “take breaks from all the news coverage,” which can be overwhelming, especially for children. “Talk to your children factually but calmly,” she said. And for those with existing mental health issues, she underscored the importance of keeping up treatment. For anyone needing immediate help, she recommended calling the county’s mental health hotline, (516) 227-TALK (8255).