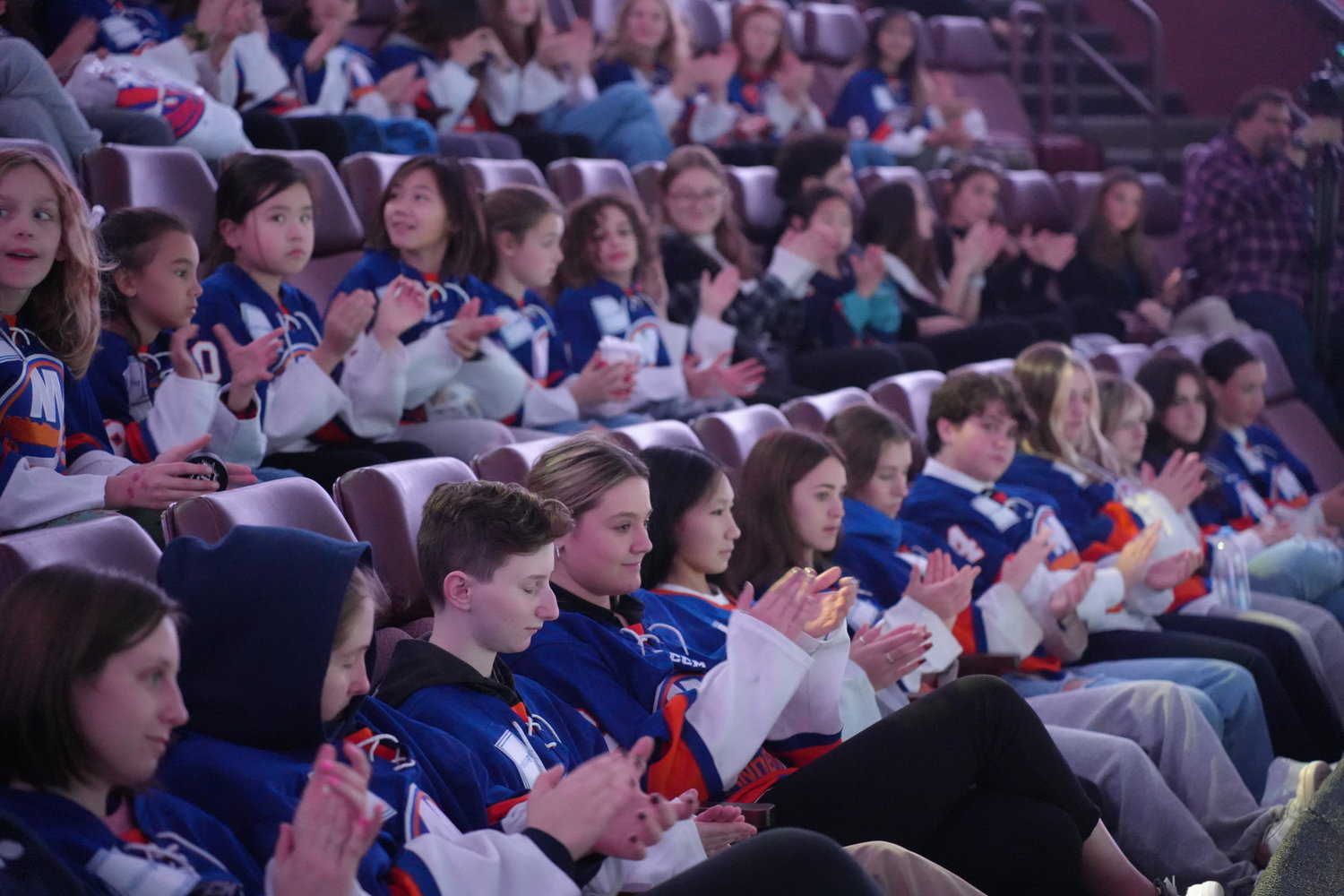 Members of the New York Islanders Girls Elite Hockey program joined their parents and coaches celebrating the 50th anniversary of Title IX last week with a panel of women who spoke about how the groundbreaking law shaped their professional careers.
Tim Baker/Herald 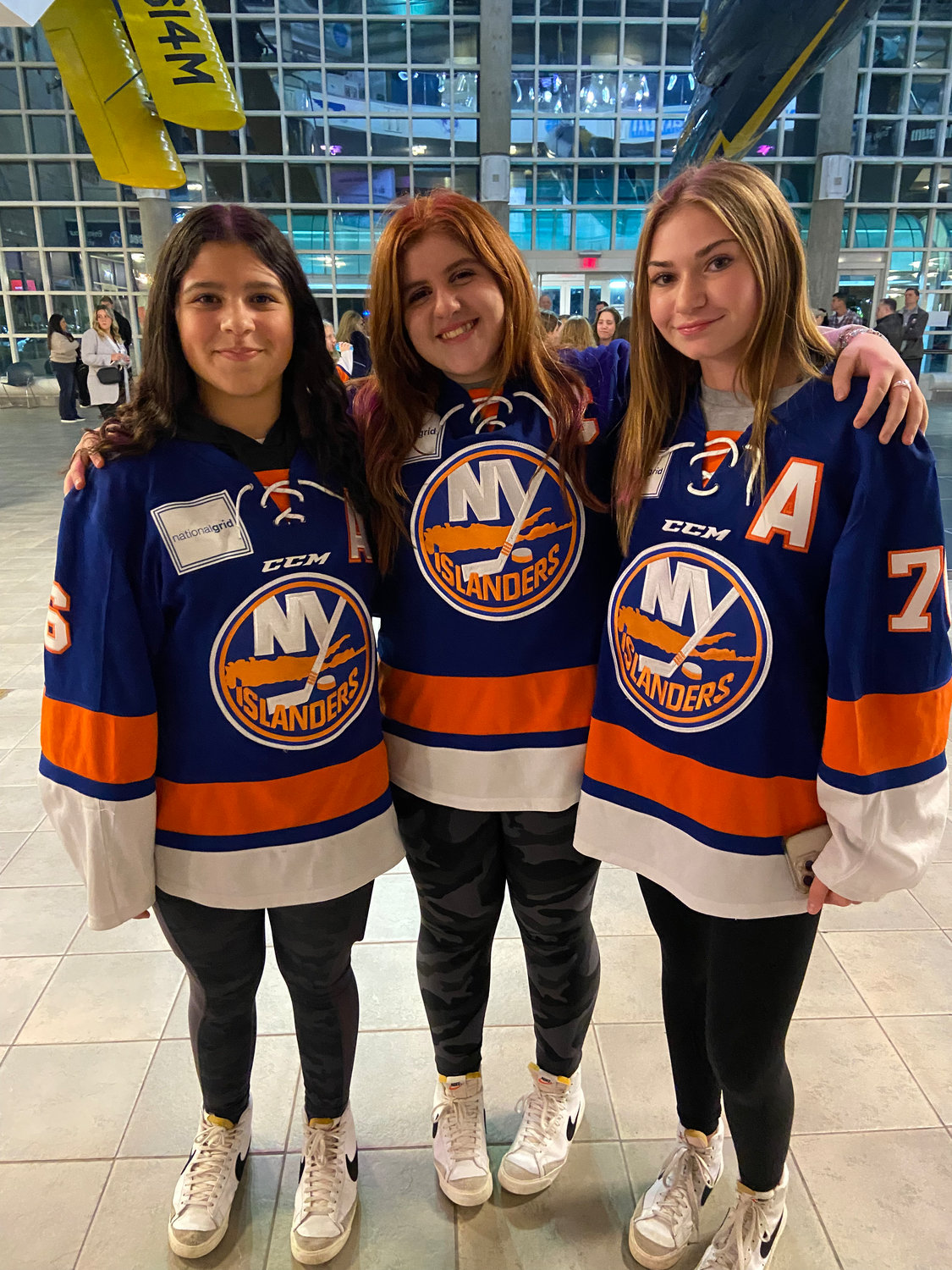 Adrianna Morabito, 12, far left, and teammates Megan McCarthy, 14, and Emily Stein, 12, joined those participating in a panel to talk about Title IX’s impact on women in sports at the Cradle of Aviation in Garden City.
Mallory Wilson/Herald 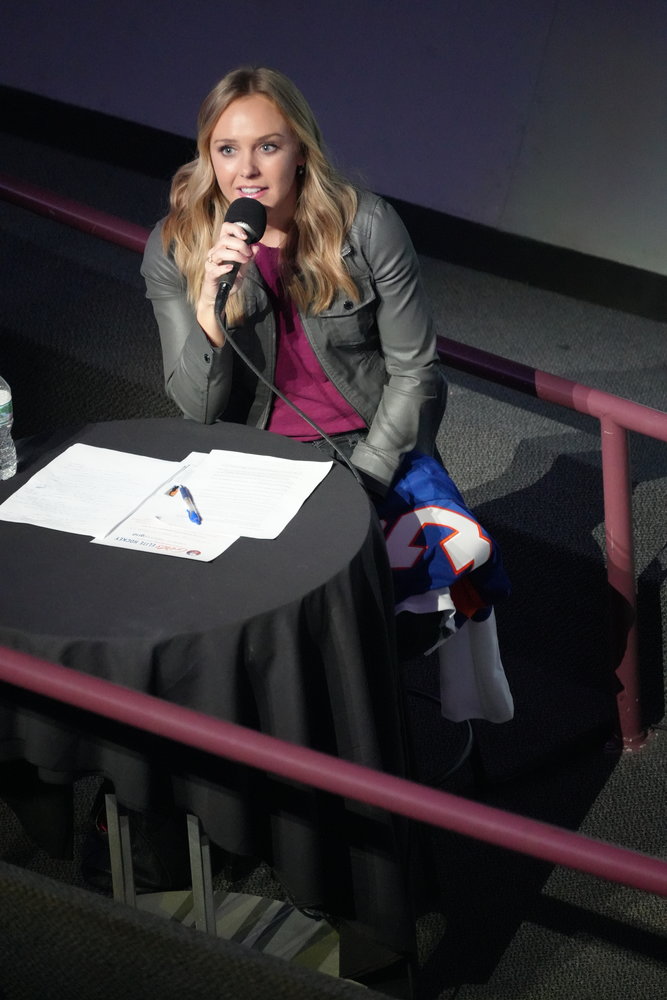 Jamie Hersch, of the NHL Network, asked each panelist a list of questions for them to give their input on.
Tim Baker/Herald
Previous Next
By Mallory Wilson

It’s just 37 words long, but its impact has lasted 50 years and counting.

The civil rights law known as Title IX opened the doors to legal equality for women in educational institutions — including sports — and was celebrated at Garden City’s Cradle of Aviation last week when more than 100 girl ice hockey players and their parents gathered to talk about how this federal legislation afforded these girls the opportunity to play a sport that has typically been male-dominated.

They are members of the New York Islanders Girls Elite Hockey program run at the Northwell Health Ice Center in East Meadow — the same facility used by the cherished local NHL squad. The teams include girls ranging in ages from 8 to 19, and was started in 2016 by Alexis Moed, the general manager of the Premier Hockey Federation’s Connecticut Whale.

“It was just my feeling that things weren’t being done the best way that they could be, or the way that was the most beneficial to the players,” Moed said. “So, I took all of my experiences and what I went through, and taking everything that I didn’t have growing up, and putting it together for them in the program.”

The young players come from all over Long Island. Some started with Girls Elite Hockey, while others might have first dropped pucks in boys’ leagues before eventually finding themselves with the newer league. Either way, the consensus is clear — they like where they are, and they like having their own league.

Debbie Curry started playing with an Oyster Bay town league before joining a travel hockey team with the Long Island Sharks in New Hyde Park. But after three years playing with them, the 12-year-old goalie from Seaford was let go.

“She was so dedicated, and we were very involved,” her dad, Keith Curry said. “And then she got cut along with most of the other girls on the team.”

Moving Debbie to Girls Elite Hockey was the best thing to happen to her, said her mom, Christie.

“She always had a target (on) her for being a girl in a boy sport,” Christie said. “Here she can be recognized and have a chance to go somewhere with hockey in the future because they’re giving the girls a chance to shine. I’ve never seen her so happy, and she can just be herself.”

Debbie wants to eventually go pro, and feels like this Islanders group gives her that chance because “they accepted me much quicker than the boys did.”

Being accepted and feeling more comfortable were common themes.

“I felt welcome on the boys’ teams I played with, but there were definitely some boys who would tell me that they were better than me because I was a girl,” said Emily Stein, a 12-year-old from Bellmore. “It’s so much better with girls because you feel more comfortable. And it’s like a second family.”

Adrianna Morabito says she can compete at the same level as boys, but camaraderie is what led the 12-year-old Wantagh player to the all-girls league.

“At any other organization, I could’ve been at 12U and quit because I didn’t like anyone on my team,” she said. “But because I was here, the friendships have been really good, and they’ve made me a much better player.”

“I’m surprised that there hasn’t been more growth in the last 50 years,” Moed said. “But we recognize that the change can be slow. And we’re all committed to pushing that along.”