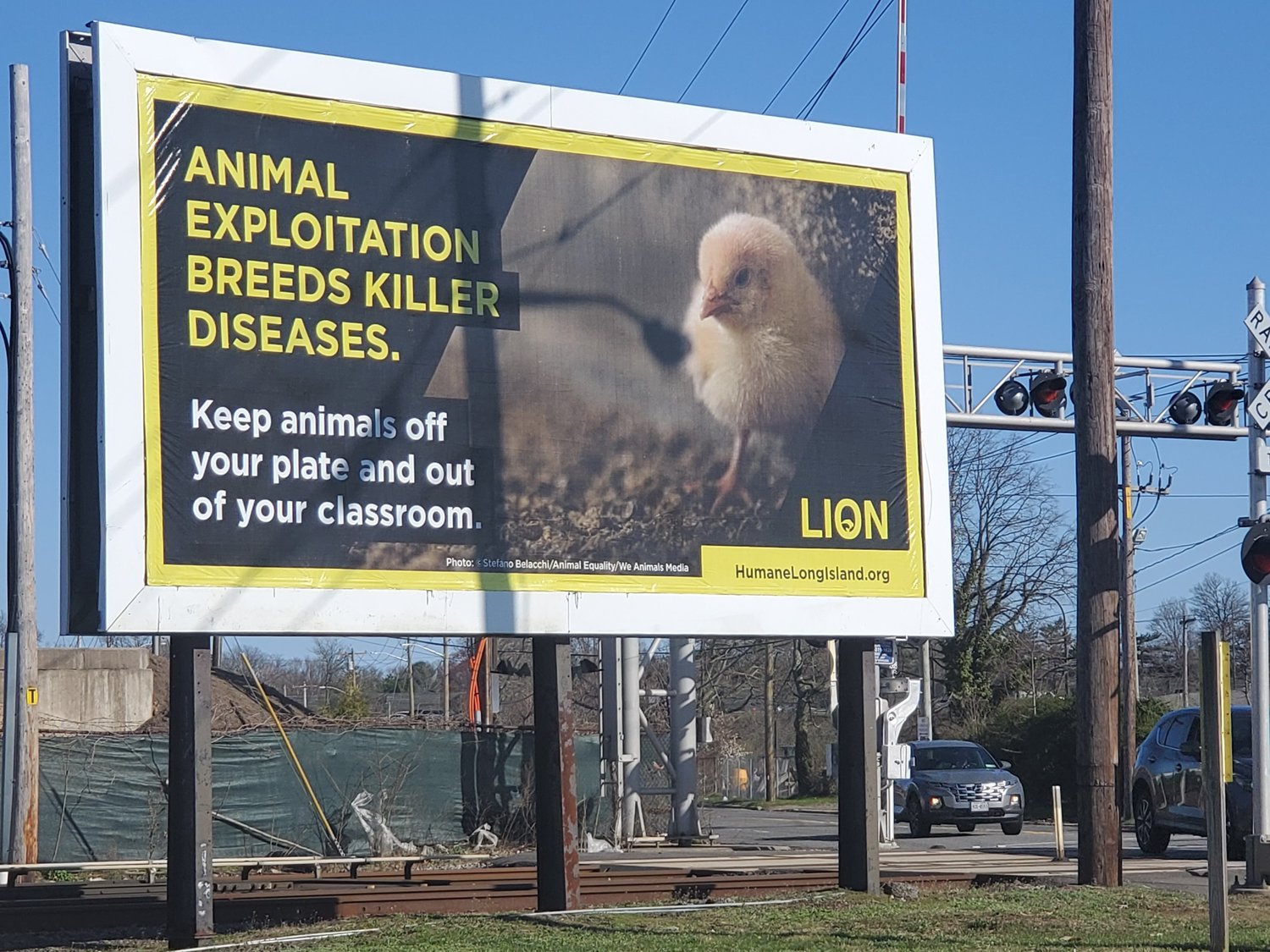 Lifelong Malverne community advocate John DiLeonardo, who relocated to Riverhead last year, has dedicated his life to rescuing and rehabilitating animals, and now he’s hoping to encourage others to do the same in a big way.

DiLeonardo, who runs Long Island Orchestrating for Nature (LION), which he calls the “leading animal advocacy organization on Long Island,” has installed six billboards in Brookhaven, Deer Park, Syosset and Hicksville. The billboards remind passersby that “animal exploitation breeds killer diseases” and urges them to “keep animals off their plate and out of your classroom.”

LION was originally founded as a circus protest organization but has now expanded its focus to combating slaughterhouses, aquariums, wild animal acts and now its most prominent effort focuses on domestic fowl rescue.

He says that families and schools often buy chicks and ducklings for Easter gifts or for science experiments but then once the holiday or lesson is over, they become abandoned.

“When these cute little ducklings or chicks grow up and become big pooping machines and turn out to be a lot more work than they signed up for, people will just drive them to the nearest park or pond and dump them,” DiLeonardo said. “They basically discard them like trash but these are thinking, feeling animals; they’re not school science experiments and they’re not Easter props and we rescue hundreds every single year.”

Additionally, he says that this spreads disease.

“The avian flu is highly pathogenic and is going around the entire United States and there’s been a major outbreak, which is both a threat to wild and domestic birds and even humans,” DiLeonardo said. “Thankfully here hasn’t been a bird-to-human transmission in North America yet but scientists say there’s potential for it to be the next pandemic. When you buy an animal for a school experiment or to be shipped to your house at a day old, they’re all coming from these industrial factory farms where these diseases are incubated, so you’re not being health conscious; you’re introducing pathogens from these factory farms into your own backyard or school yard.”

The billboards feature full-color photographs of wildlife and the phrase “keep animals off your plate and out of your classroom.”

“The verbiage was all our own,” DiLeonardo said. “I’ve been vegan for almost 14 years now and we encourage people to stop consuming all animal products and we thought something catchy like ‘keep animals off your plate and out of your classroom’ would appeal to the masses rather than ‘go vegan’ we wanted to include that whole science project side of it.”

He says that the images came from two sources: “human.cruelty” and “We Animals Media.”

Human.cruelty is a photographer who does undercover investigations into factory farms and took the photos of the gosling and waterfowl.

We Animals Media is a project of animal rights photographer Joanne McArthur and took the photos of the chickens.

The cost of the billboards was nine thousand dollars but was funded by a grant from Lush Cosmetics.

Each of the billboards were positioned in key locations.

“Every one of the billboards is in a location where there has been a massive amount of fowl abandonment and hatching projects,” DiLeonardo said. “They’re all in proximity to elementary schools where we’ve rescued quite a few birds. The one in Deer Park is around the corner from The Barn Pet and Feed store; we just did an undercover investigation with Inside Edition and we busted them for illegally selling underage birds in quantities of less than six. There’s a law in New York State that no baby duckling under age of two months can be sold in quantities of less than six. The reason for this is because it’s supposed to cut down on impulse buys. You can’t buy one baby chick and stick him in an Easter basket; you have to commit to a whole flock.”

“I’m an anthrozooloigst and my wife is a licensed wildlife rehabilitator, so we offer our services for free to any school or class that wants to have us and we’re comfortable speaking to Pre-K all the way up to the university level so we offer ourselves as alternatives,” DiLeonardo said. “You can also watch live videos; Cornell for example has live videos of hawks and eagles, so students can experience the lifecycle from egg to adulthood and watch how it happens in the wild naturally and not in a classroom away from their parents.”