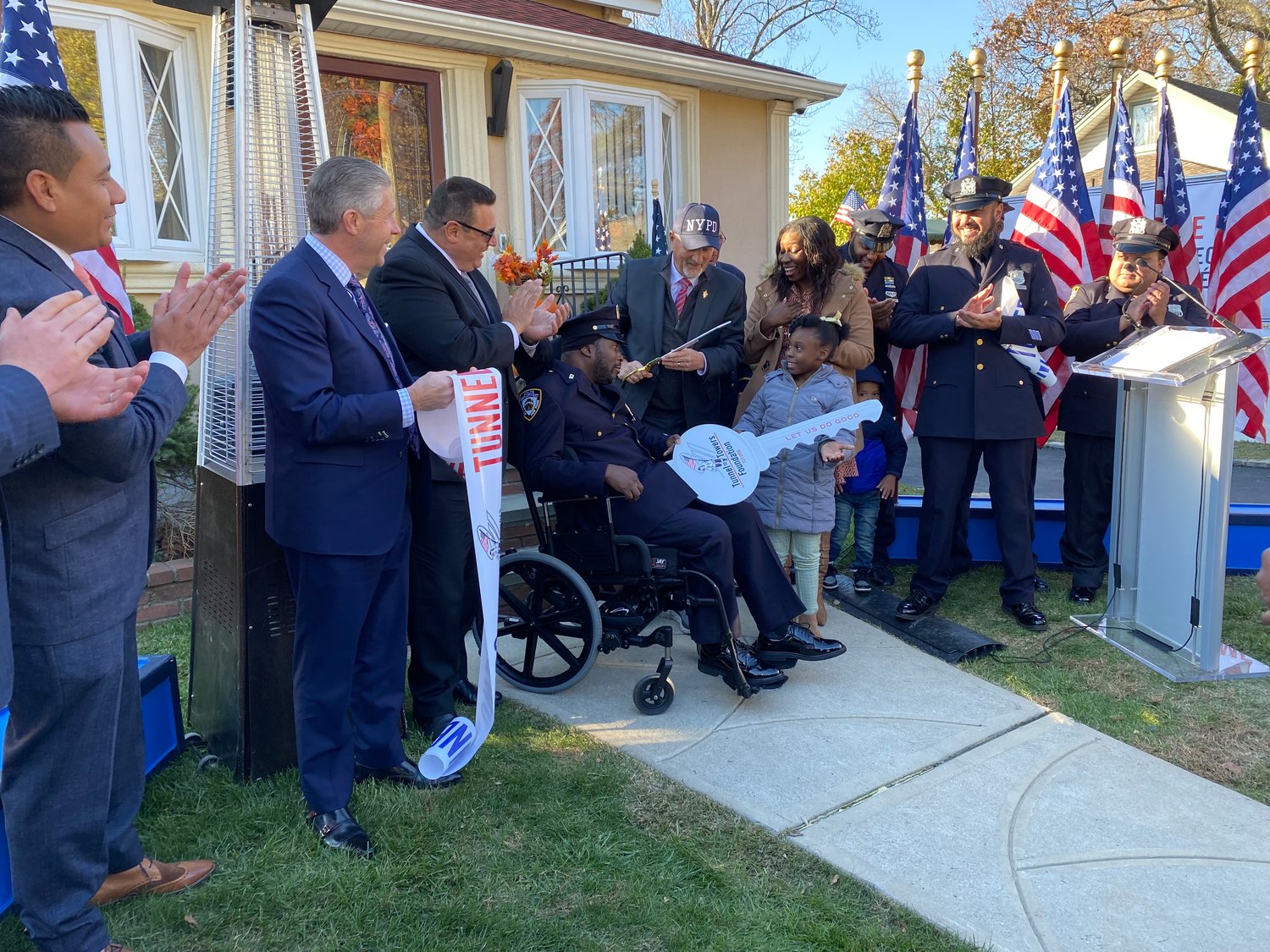 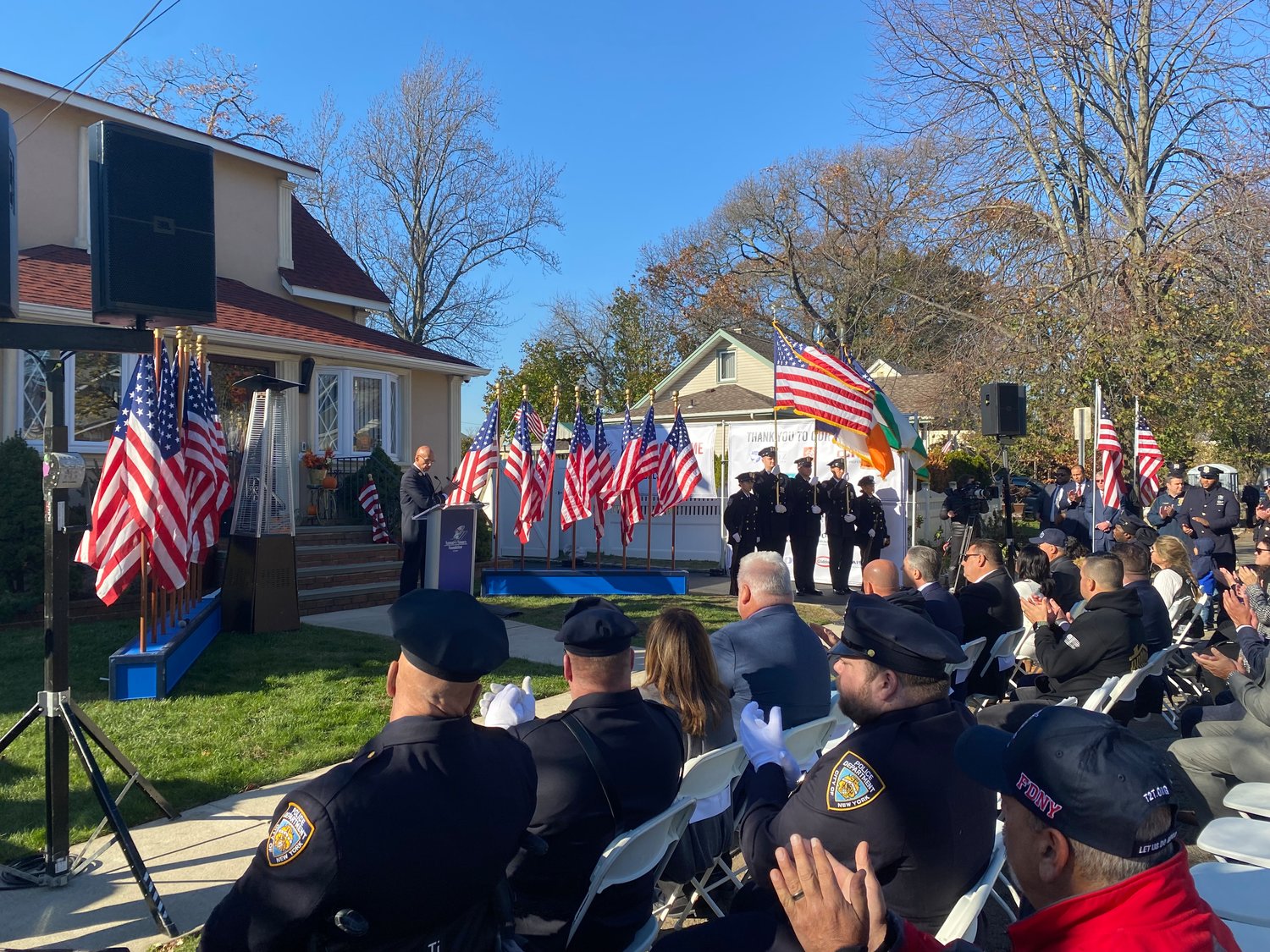 Smart homes are equipped with lighting, heating and electronic devices, which are controlled remotely. The Tunnel to Towers Foundation equips each home with technology like automated doors and lighting, wider halls and doorways, and special showers to accommodate wheelchairs. Each home is designed to meet the needs of individual first responders who were critically injured, and help them to reclaim their independence.

The Tunnel to Towers Foundation awarded New York Police Department detective Dalsh Veve — who was critically injured in the line of duty in 2017 — a mortgage-free smart home in Baldwin just prior to Thanksgiving.

Veve was seriously injured after responding to a report of shots fired at Tilden Avenue and East 53rd Street in Brooklyn on June 3, 2017. The suspect, a teenage car thief, dragged Veve with the car for nearly two and a half blocks until the car crashed on East 53rd Street. The detective suffered a traumatic brain injury, from which he has been recovering for the past five years.

During a welcoming ceremony on Nov. 22, in front of a large gathering of service and community members, Veve was given the keys to the smart home on Voshage Street in Baldwin. The home is equipped with a two-car garage, an outfitted physical therapy room, and an ADA-compliant bathroom.

Members of the NYPD, Nassau County Police Department’s First Precinct, The Tunnel to Towers Foundation, the Baldwin Fire Department and the FDNY Pipe and Drum Color Guard welcomed Veve at the ceremony, beginning with a motorcade of fire trucks and police vehicles driving to the home.

“Thank you for all the hard work everyone has done for the past few months,” Veve’s wife, Esther, said.

Since his injury, his wife has been his caretaker, and she said the new smart home is a massive relief to her and her family because now she can focus solely on his care while stabilizing her finances.

NYPD Deputy Chief Joseph Galada, Veve’s commanding officer at the time he was injured, attended the welcoming ceremony and told how the Veve family connected with the Tunnel to Towers Foundation.

“I’ll never forget, it was during a holiday party, and I saw Esther having a hard time — she was managing work, while taking care of Dalsh, and it broke my heart a little,” Galada said.  “I told her let’s reach out to Tunnel to Towers and see what they can do. Then we found hope.”

The foundation set up a podium and flag display on the front lawn of the home to give speeches and welcome the Veve family to their new home. Jack Oehm, the foundation’s co-founder, welcomed the crowd and spoke fondly of Veve and his family before introducing Frank Siller, the foundation’s CEO and chairman.

“Like my brother, he was willing to risk his life, so we can live in a city where we have safety,” Siller said.

Siller started the Tunnel to Towers Foundation in honor of his brother, Stephen, a firefighter who died responding to the Sept. 11, 2001 terror attacks on the World Trade Center. Now the foundation is working on fulfilling its goal to deliver 1,000 mortgage-free smart homes to first responders across the United States by the end of 2022.

“When somebody serves the community, everybody in that family serves,” Siller said. “Enjoy your new home, you’ve earned it.”

Before introducing Veve’s wife, Siller gave her a replica of a piece of steel from the World Trade Center’s twin towers, which is now a centerpiece inside their new home, as well as the key to their new home.