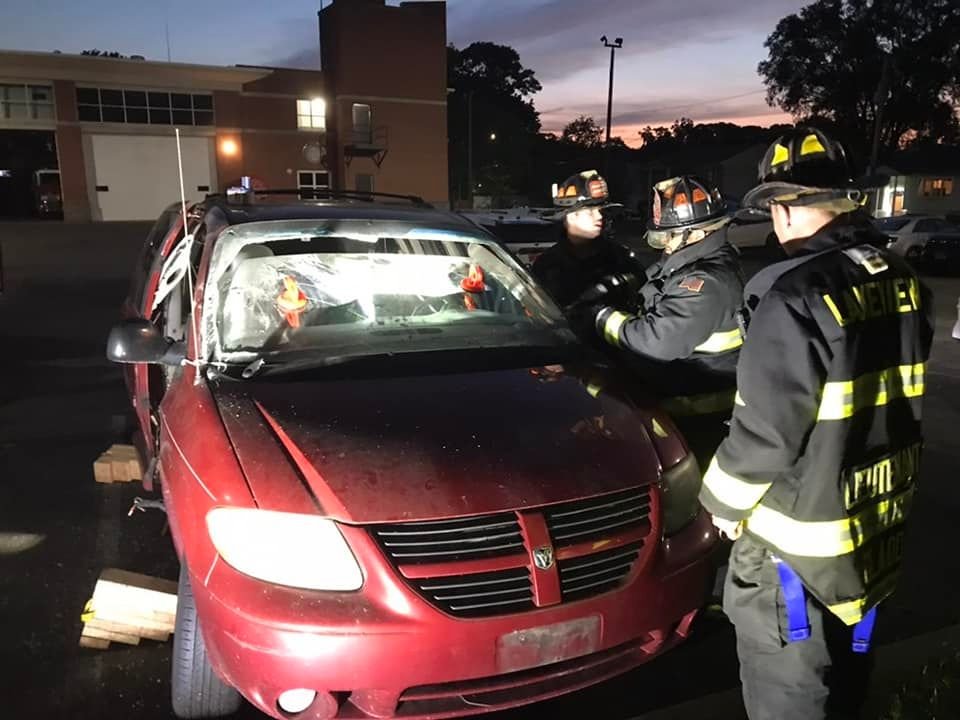 Firefighters with the Lakeview Fire Department practiced extrication on a donated car on the evening of July 13.
Courtesy Yulia Dykman Hill 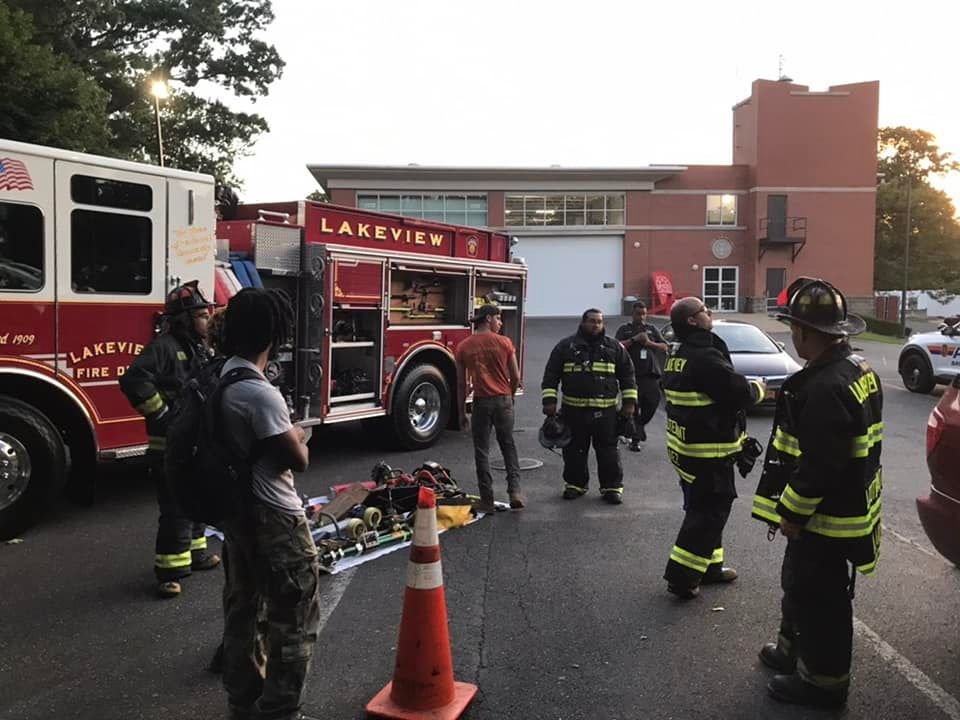 Firefighters can regularly be seen preparing for drills outside their headquarters on Woodfield Road on Wednesday evenings.
Courtesy Yulia Dykman Hill 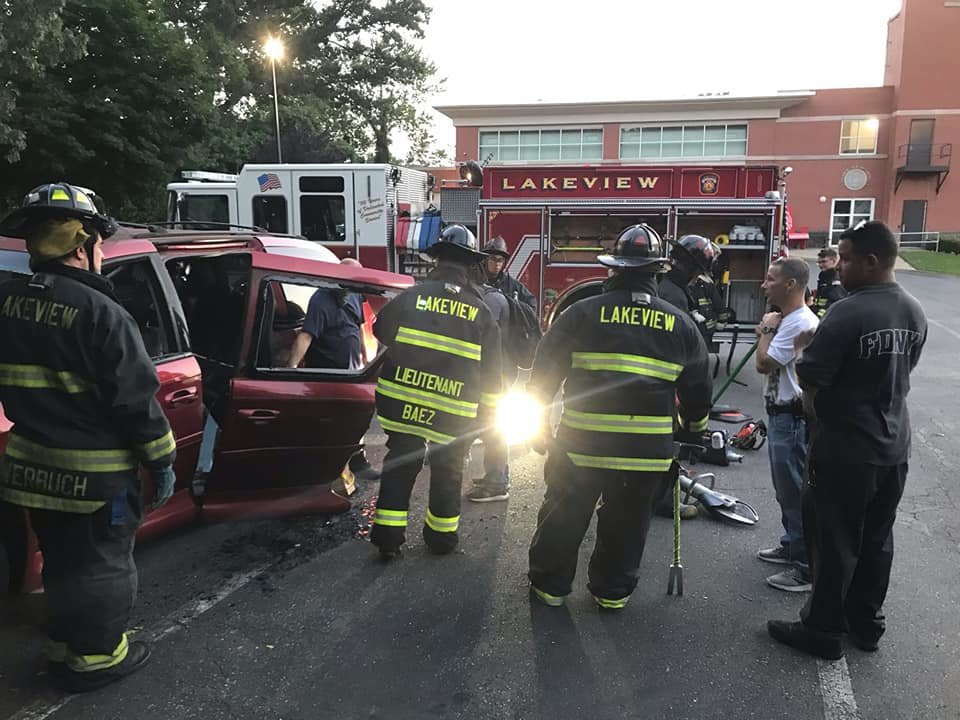 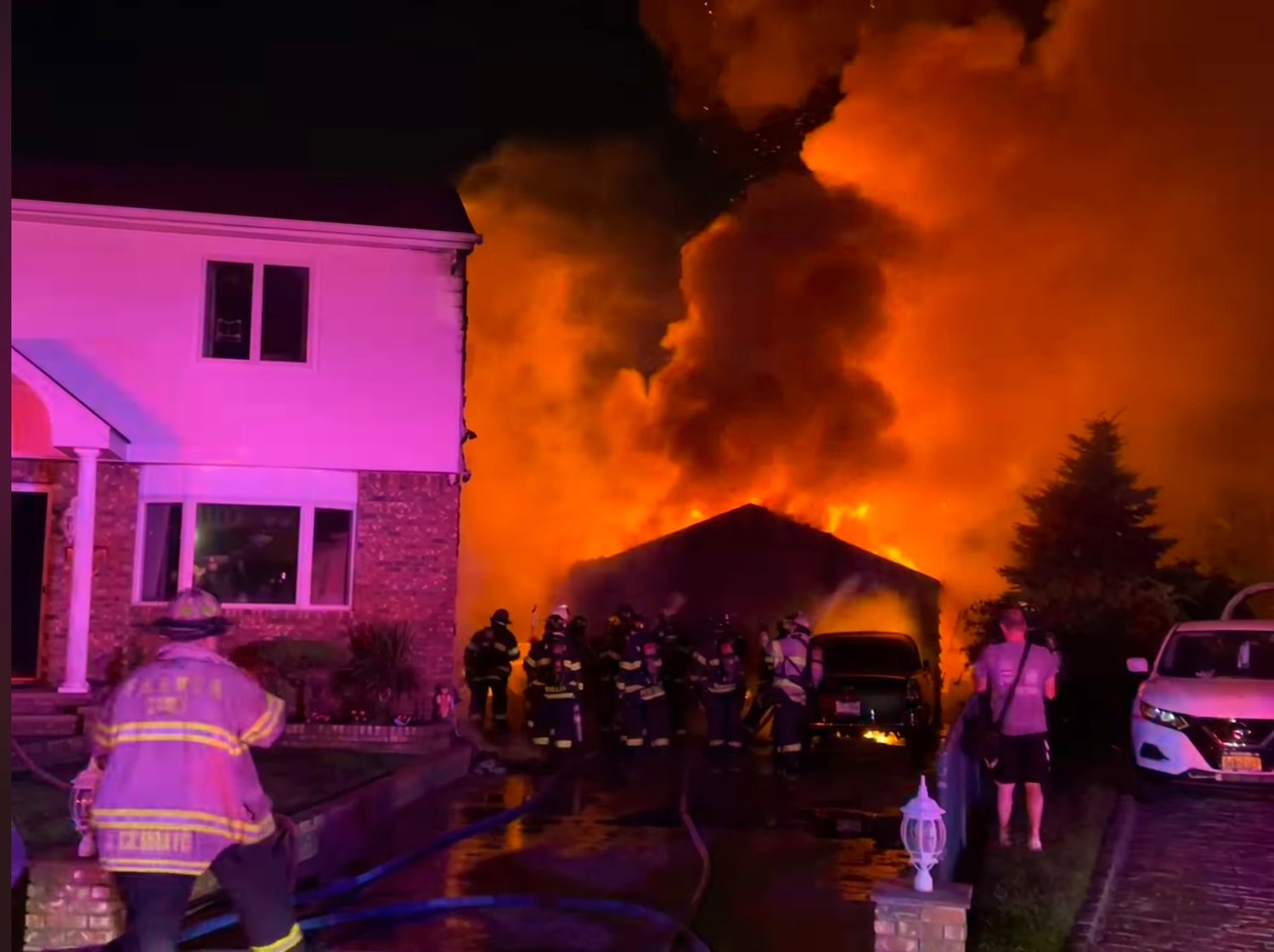 The Lakeview Fire Department was one of 10 fire departments to assist the Franklin Square Munson Fire Department in responding to a garage fire in the late hours of July 13.
Courtesy Benjamin Diamond
Previous Next
Vivian Rose

The past two Wednesday nights have been busy with practice and drills for the Lakeview Fire Department – mainly training their firefighters in car extrications. Using what Chief Michael Joyce described as a, “donated junk car” firefighters were tasked with a “teamwork type drill”. Both firefighting and ambulance agencies of the Lakeview Fire House must come together in these drills to practice safe and efficient ways of getting victims out of burning cars and ensuring those in danger they get the help they need.

The Fire Chief said of the past two Wednesday night drills, that although the teams of firefighters and the EMT crew simulate an entire car extrication and injured victims, the tools they use are very much real. According to Chief Joyce, the team practiced using “extrication tools, the jaws of life, and cutters for heavy metal.” The firefighters could be seen practicing their operations outside the Lakeview Firehouse, alongside Squad/Rescue Engine 413.

The Lakeview Fire Department regularly informs its citizens of any incidents and activity going on at the Firehouse via their Facebook page. According to a post regarding the weekly drills, “During these summer months we need to ensure our members are always sharp, as the roadways are extra crowded and the Southern State Parkway is always a hot spot for late night dangerous situations.” The firefighters worked into the darkness to simulate the difficult nighttime crashes they might be called to respond to.

However, the Lakeview Fire Department doesn’t stop at drills and simulations. Late in the evening on July 13th, the Lakeview Fire Department answered a call from a burning garage on Howard Avenue in Franklin Square. The fire was first reported around 11 p.m. and although it was contained, it did result in multiple vehicles burning, the collapse of the garage, and minor damage to neighboring houses.

Responding with a crew of firefighters and ambulance 4181, the Lakeview Fire Department was among 10 other local fire departments who worked alongside the Franklin Square and Munson Fire Department. According to Chief Joyce, who was at the scene, “our primary prerogative was to respond to any injured personnel and of course to aid with the transportation of any injured civilians.”

The Lakeview Fire Department did end up having to transport one injured civilian to the hospital in an ambulance. Two Franklin Square firefighters were also treated for exhaustion.

Eli Wein, a 13-year veteran of the Lakeview Fire Department, was also at the scene. Wein took the fire in stride. “It was relatively uneventful,” he said. “I was there as an EMS, but I do help sometimes as a firefighter.” Wein also assisted the injured civilian. “We had one transport we helped with minor injuries,” he said.

The Lakeview Fire Department regularly holds drills on Wednesday evenings,usually outside of their headquarters on Woodfield Road, ensuring their firefighters, EMTs and other emergency response personnel are ready at all times.