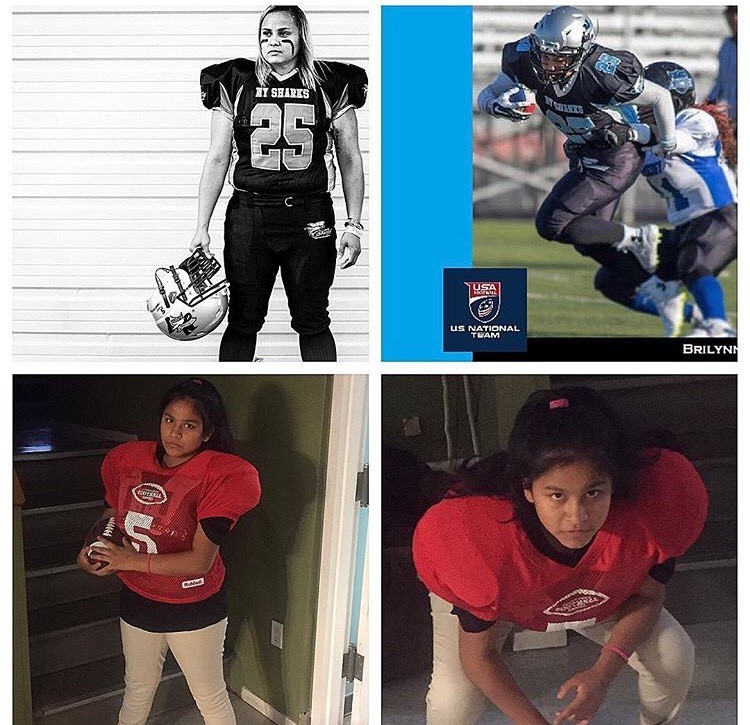 Family & Children’s Association’s Lakeview House recently teamed up with Long Island Youth Mentoring to make one resident’s dream come true. The Lakeview House, based in West Hempstead, serves as a community residence for co-ed teens that are 13-18 years old, who suffer from significant emotional impairments and mental illness. Francy Morin, a 15-year-old from West Hempstead, had always dreamed of being a professional football player. The partnership between Lakeview House and Long Island Youth Mentoring provided Morin with the opportunity to not only build a rewarding and supportive relationship with a mentor, but to connect with a mentor who is a professional football player.
Brilynn Fields, 30, is on the Team USA Women’s Tackle Football team. Fields has been a wide receiver and offensive tight end for the New York Sharks of the Women’s Football Alliance since 2013. She is the head of talent and acquisition for a management firm by day and a star football player off the clock.
Fields visits Morin at least once or twice a week. The two spend quality time together, whether it is going to the movies or just shooting hoops outside the Lakeview House. For Halloween, Fields allowed Morin to borrow her football gear so she could feel like “the football player she’s always dreamed to be.”
“She reminds me a lot of myself as a kid,” Fields said. “So much energy and imagination, but often misunderstood. One of my greatest strengths is in the sports realm [of] track, basketball and softball, then most recently and most loved: Football. So imagine my surprise when I was told that the little girl that I’d have the honor and pleasure of working with wants to be a future football player.”
Fields also said that she never imagined that football would be a possibility as a teen, and that for her, the sport has become a place of peace. She said that she’s grateful to share her passion to teens like Morin.


“When we hang out, I’m able to show her routes as a wide receiver,” Fields said, “and even show her how to hold her hands to receive the ball as a running back — or as she would call it — ‘the one who gets the hand off and plows through everyone.’”
Fields later explained that football can teach many skills in life, which includes how to be a team player, how to be selfless, strength and commitment to something bigger than yourself. She hopes instill those qualities in Morin as the two continue to spend time together, and she is also excited to bring her to a New York Sharks football game. “I pray it changes her life in the most positive way, the same way that it did mine,” she said.
In the future, Fields said would like to hold public discussions with younger children, especially people that are in the LGBT community, as well as other groups who might feel alone.
“I’d like to be a part of the solution for others to know that they have an outlet in which they don’t’ have to feel alone,” she added. “I’d like to help those people in the darkness, find even just a sliver of light that might help them on their journey. It is my wishes, hopes and dreams to continue becoming the change I wish to see in the world.”
For over 25 years, Long Island Youth Mentoring has matched at-risk children between ages 8 and 16, with screened, trained Christian adults who sense the need to help a child-in-need, and they spend two to four hours a week together. Long Island Youth Mentoring has a tutoring program for children in grades two through five called Partners to Potential, Jail Visitation in Nassau County and the Girls in Alternative Placement program mentoring girls who are living in a group home or residential treatment facility.
Family & Children’s Association’s Lakeview House is a community residence for adolescents who suffer from significant, emotional impairments and are in need of a structured setting in the community that enables them to become involved in the responsibilities of daily living. Residence in this program allows for staff of both the referring agency and the community residence to plan for the youth’s future. The program is certified through the New York State Office of Mental Health.
To learn more, visit www.familyandchildrens.org.