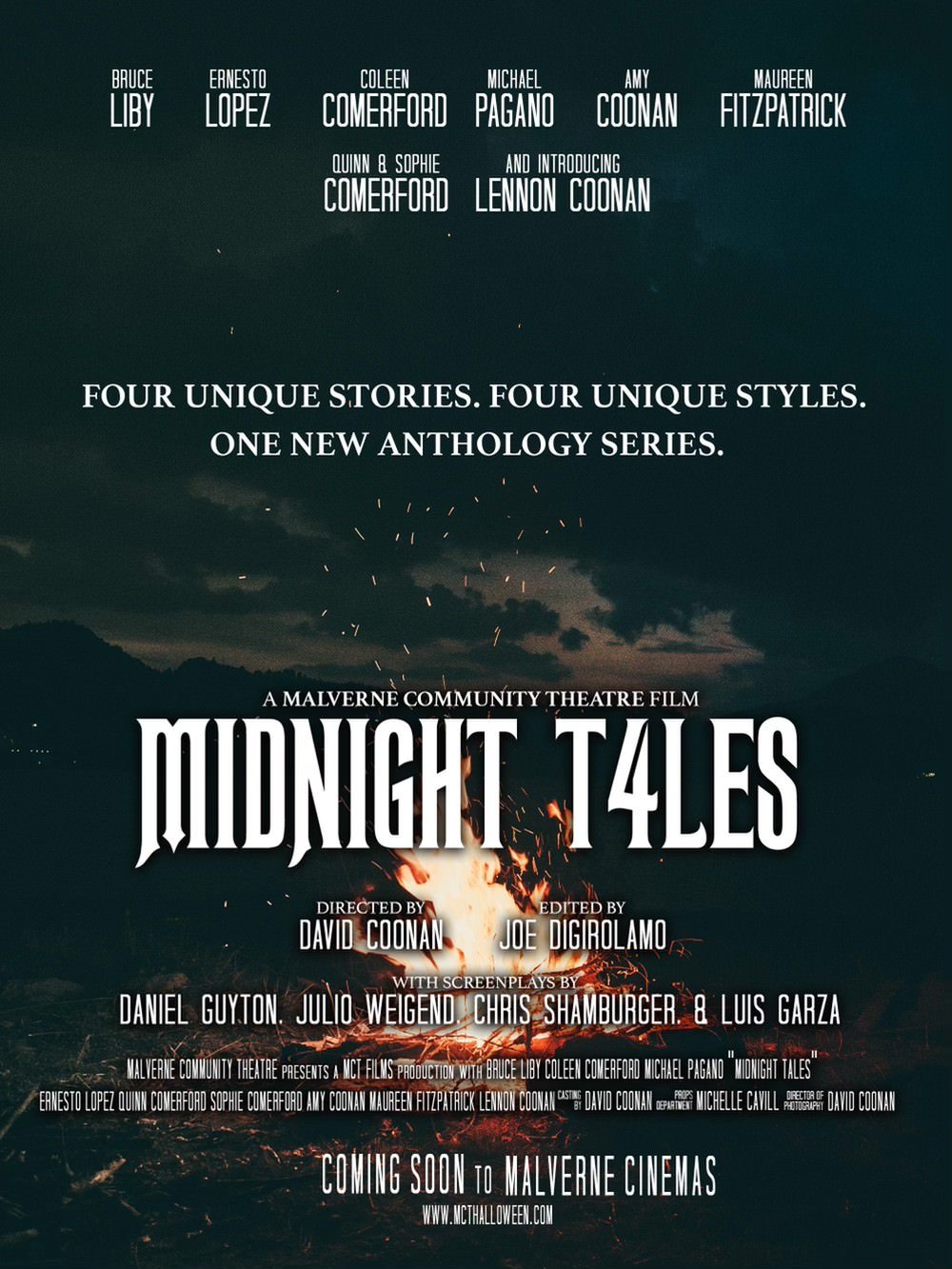 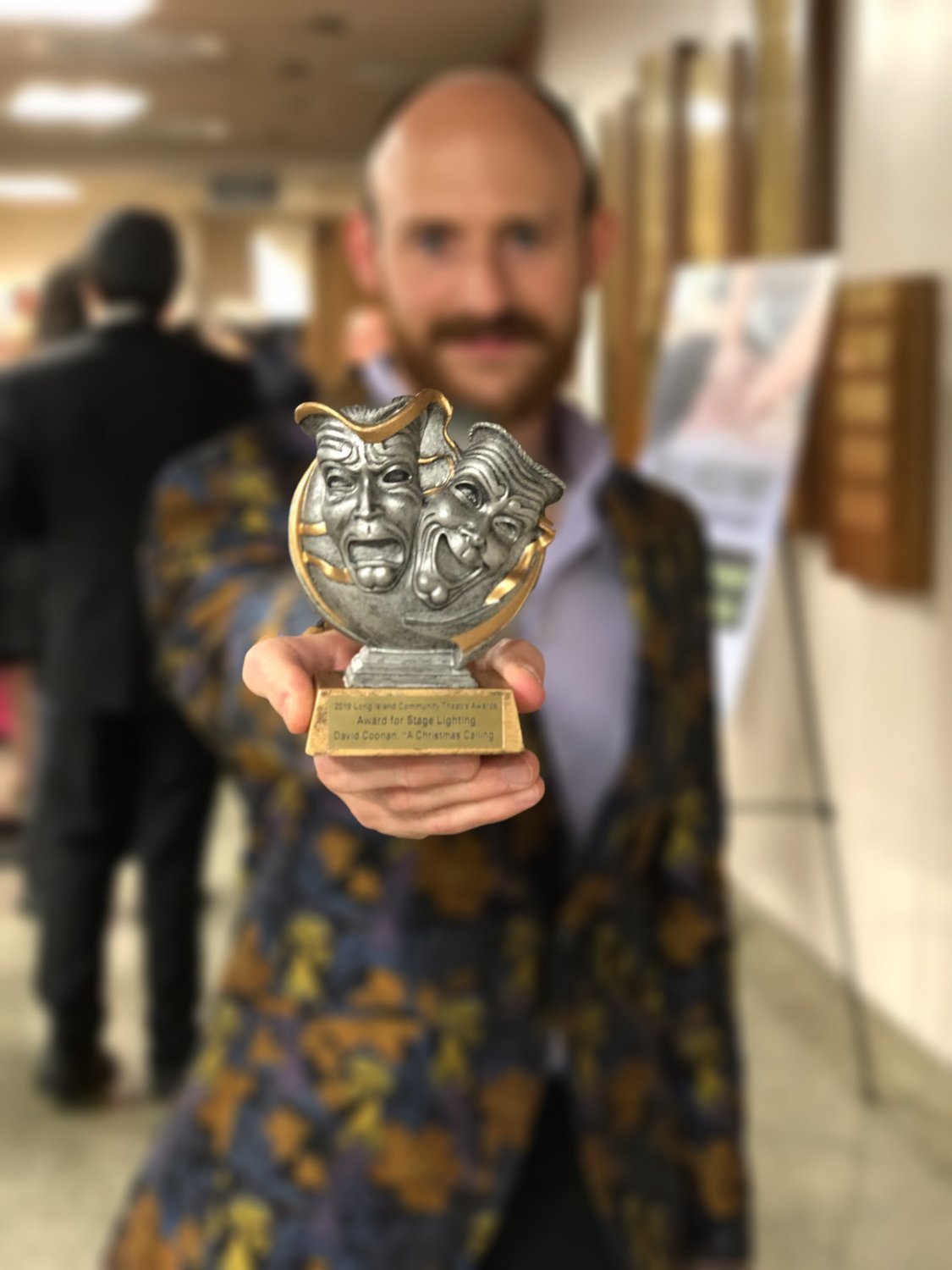 The MCT won a lighting award in 2019 for a livestreamed Christmas story that “straddled the horror genre,” Coonan said.
Courtesy The Malverne Community Theater
Previous Next
By Robert Traverso

The Malverne Community Theater is holding a viewing of its first ever cinematic short film on Monday, Nov. 29 at 7 p.m. at the Malverne Movie Theater.

Titled “Midnight T4les,” the 30-minute film is an anthology, meaning it consists of four separate, unrelated stories that blend the genres of horror and comedy. The film premiered over Halloween weekend, shown three times through an online streaming service.

“It’s something we love,” said Malverne Community Theater President David Coonan, who noted that the MCT creates a Halloween-themed production each year. He said that blending comedy and horror is natural for the group of nine to 10 theater actors. “For us, it’s never been an issue because we’re big fans of comedy and we’re also big fans of horror,” Coonan said.

Malverne Community Theater President David Coonan said that the rise of virtual communication and creation during the pandemic is essential to understanding the film and how the company came to create it.

Prior to the pandemic, the company planned to hold live, in-person productions. Despite live theater being a “standstill,” Coonan said the Malverne-based company “tried to keep (theater) alive” through March and September 2020 through the virtual space of Zoom. Having streamed a production through Facebook Live in the past, Coonan said he was confident the company could produce quality content in this manner.

Amid the pandemic, the MCT created an app featuring improv games, videos featuring sonnets read aloud by actors for its Instagram page, old radio plays from the 1930s and 1940s read aloud by nine or 10 members of the company for its YouTube channel, and more.

These pandemic-era, largely virtual productions and creations naturally led the company to the idea of creating a film. “It allowed us to explore the virtual space and become so saturated in the virtual space that we literally got bored of ourselves,” Coonan said.

“This is a direct result in the change of the landscape. It’s not something that was ever on my radar,” Coonan said about the theater company’s decision to create a film. “Let’s do something we’ve never done before – let’s make a movie,” Coonan said, summarizing the agreement the group came to for its Halloween 2021 production.

The theater agreed to show the film, the stand-alone film being shown on the evening of Nov. 29 at the theater.

“I want as many people to come as possible,” Coonan said of the showing, which is open to the public, adding that a donation of $5 or $10 is optional. Food and beverages will be provided. “It’ll be a fun event… I would love the community to come and see this,” Coonan said.

Coonan said that the film was special to members of the MCT.

“I think everybody kind of enjoyed it,” Coonan said, adding that he plans to create another film in the future. Part of the success of the film is the close connection shared by the group prior to the pandemic and the film.

“I think having worked with each other for so long now… it makes it almost second nature to kind of understand each other,” Coonan said. Michelle Cavil, art director of the MCT, touched on the connection shared by the core group at the MCT in a previous Herald story. “We’re so close, we feed off each other and we work so well together,” Cavil said.

Coonan said there was a lot of excitement among MCT members to see each other in person following restrictions in 2020 due to the pandemic. “We just enjoyed seeing each other in person again, that was the number one thing,” he said. “It’s a camaraderie thing, being together again.”