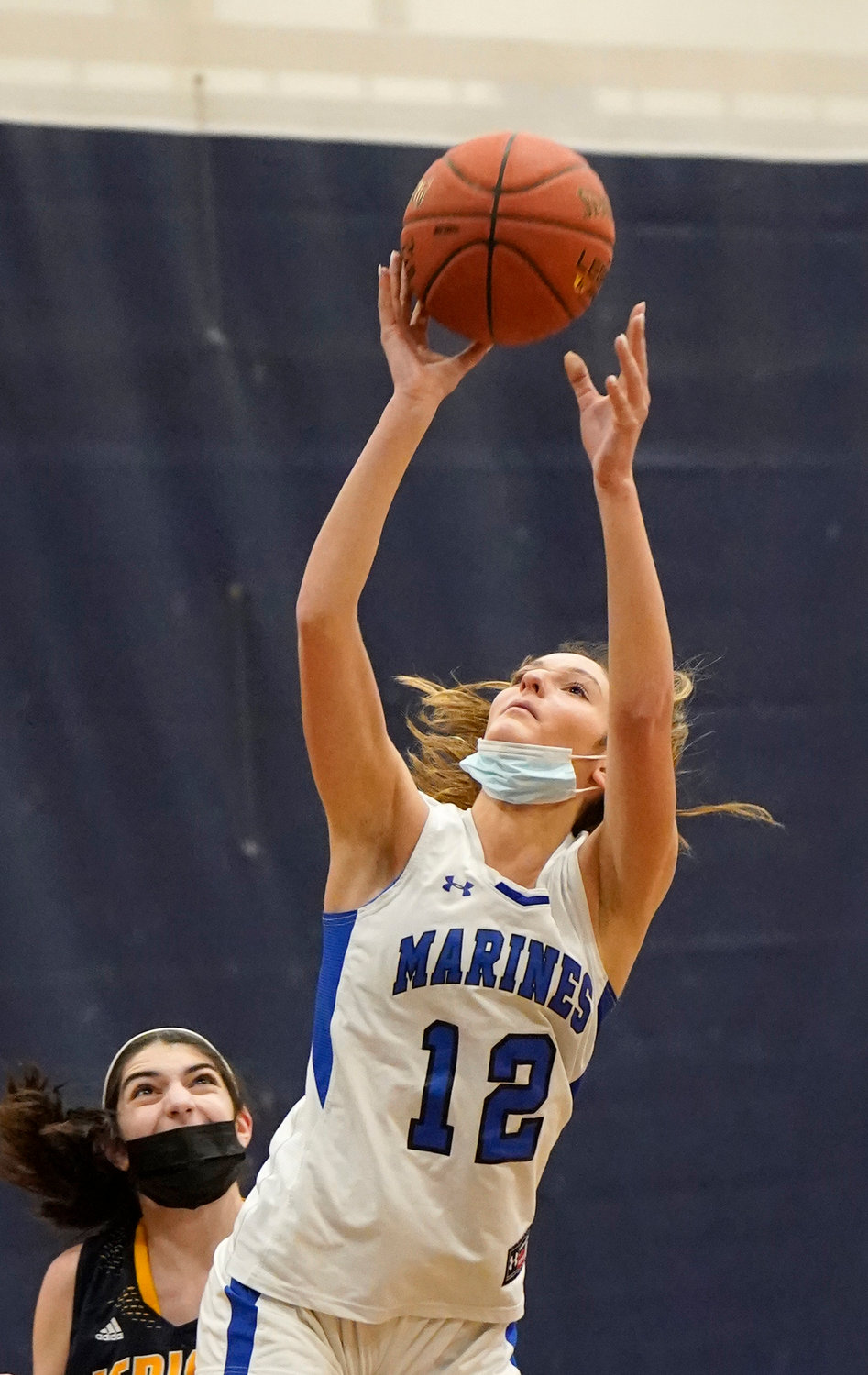 Freshman Franky DiCicco had 19 points and 7 rebounds Jan. 8 as Long Beach earned its way into the win column with a 40-20 victory at Great Neck South.
Ron Manfredi/Herald
By Tony Bellissimo

Long Beach closed the first half of the Nassau Conference A-1 girls’ basketball slate on Martin Luther King Day with an important 38-21 victory at Great Neck North despite scoring just 13 points through the opening 12 minutes.

The Marines turned up the defensive pressure in the second half, head coach Kristin Ciccone said, and made things happen in transition off turnovers to improve to 2-4 in conference play. Sophomore Ava Main and freshman Delaney Chernoff sparked the half-court trap and freshman Franky DiCicco (14 points) and junior Megan Brolley-Monahan (13) reaped most of the benefits at the offensive end.

“We were up only 13-9 at halftime and I wanted to challenge our kids and the half-court trap got their blood flowing,” Ciccone said. “They really executed the pressure defense perfectly and created a bunch of turnovers. They always work hard.”

With Long Beach’s playoff hopes hanging in the balance and its offense sputtering in the first half and squandering possessions, Ciccone said putting the game in the hands of its defensive effort was the way to go. “Ava and Delaney are perfect to use to apply pressure,” she explained. “They’re high-level lacrosse players and their lacrosse instincts really kicked in. Now that I’ve seen what we’re capable of with that kind of pressure, I’m going to keep it in my back pocket for the second half of the season.”

The Marines outscored Great Neck North 25-12 in the second half, including 9-1 in the fourth quarter. In addition to her defensive impact, Chernoff chipped in 7 points in the must-win game.

“It was super important,” Ciccone said. “Our playoff hopes would’ve been completely shattered if we didn’t get this one.

“We made some mistakes in the first half that a young team makes,” she added. “We’re starting to play better, but we’re very young and not consistent yet. We’re still looking to put together a complete 32-minute game.”

Long Beach, which has three freshmen (DeCicco, Chernoff and Reagan McCarthy) and Main, its lone sophomore, getting extensive playing time, lost its first six games out of the gate but showed some promising signs including a hard-fought 39-37 loss to conference-leading MacArthur.

“We’ve faced every team in the conference once,” Ciccone said. “We have to jump up one spot in the standings or finish .500 to get into the playoffs. It’s within our reach.”

DeCicco, a 5-foot-10 guard, is leading the offense averaging 12.2 points over the first 10 games. “She goes full speed to the basket and is tough to defend,” Ciccone said. Brolley-Monahan, Main, senior Alex Hastings and junior Gabby Gelish are all chipping in between 4 and 6 points per outing. Gelish had a season-high 11 in a 40-20 win over Great Neck South. Key contributors also include seniors Noelle Main and Lily Fenech, and junior Haley Brandt.

The Marines will look to avenge an earlier loss to New Hyde Park when they hit the road Saturday for a noon tip-off.