Malverne and West Hempstead reflect on 21 years since 9/11 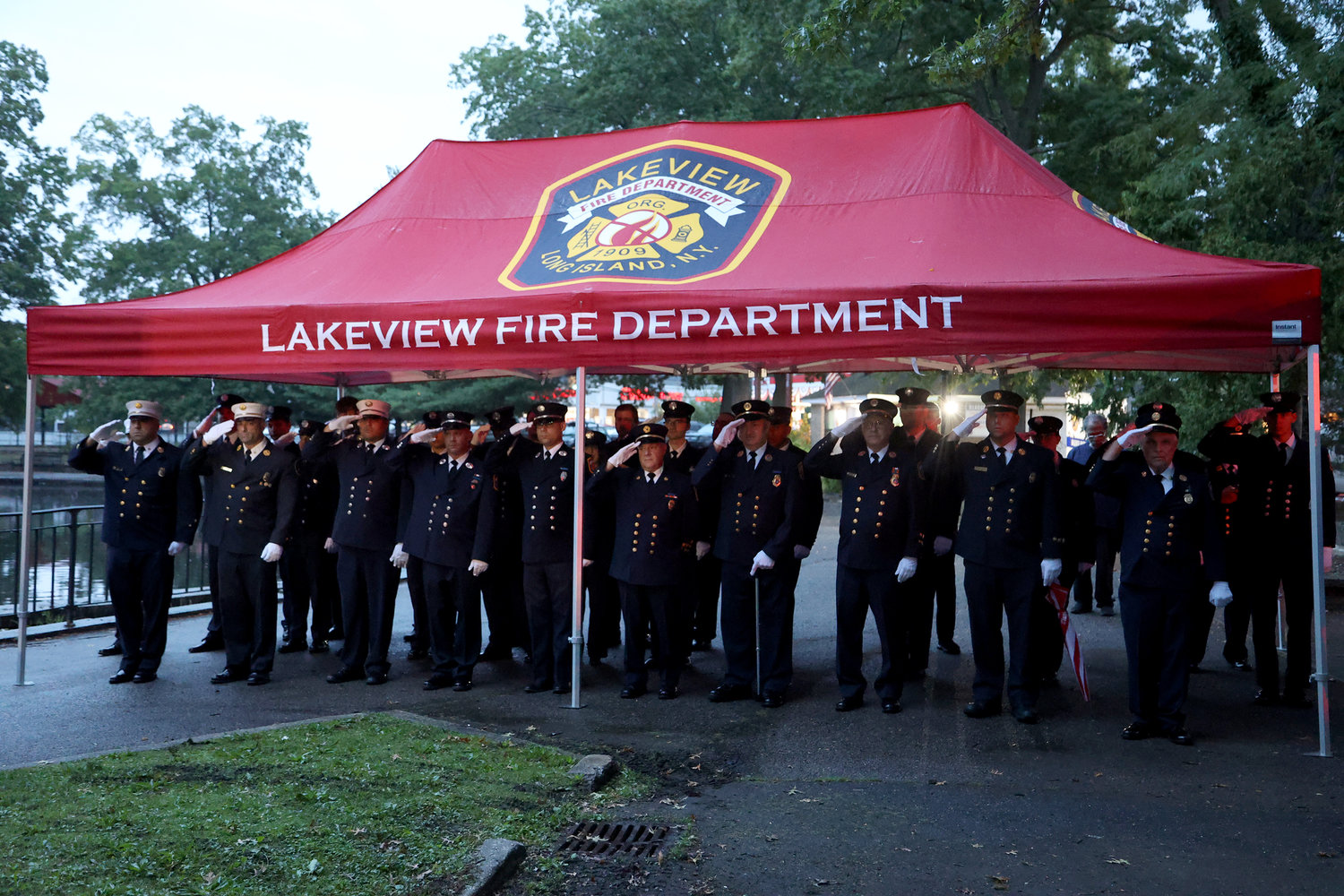 Members of the Lakeview Fire Department stood vigil in Hall’s Pond Park in West Hempstead in memory of those killed on Sept. 11, 2001, especially their fallen comrade Robert DeAngelis.
Sue Grieco/Herald 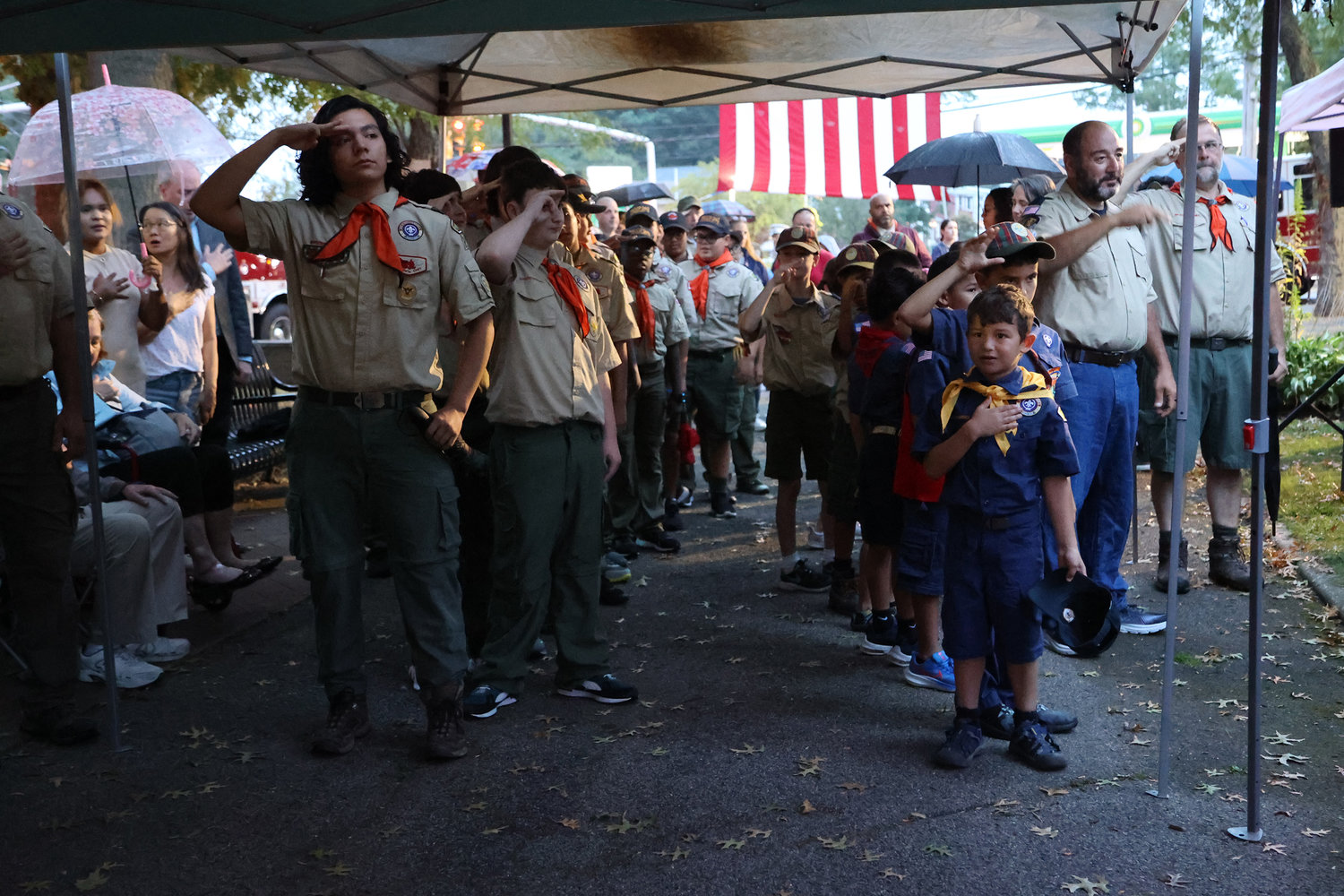 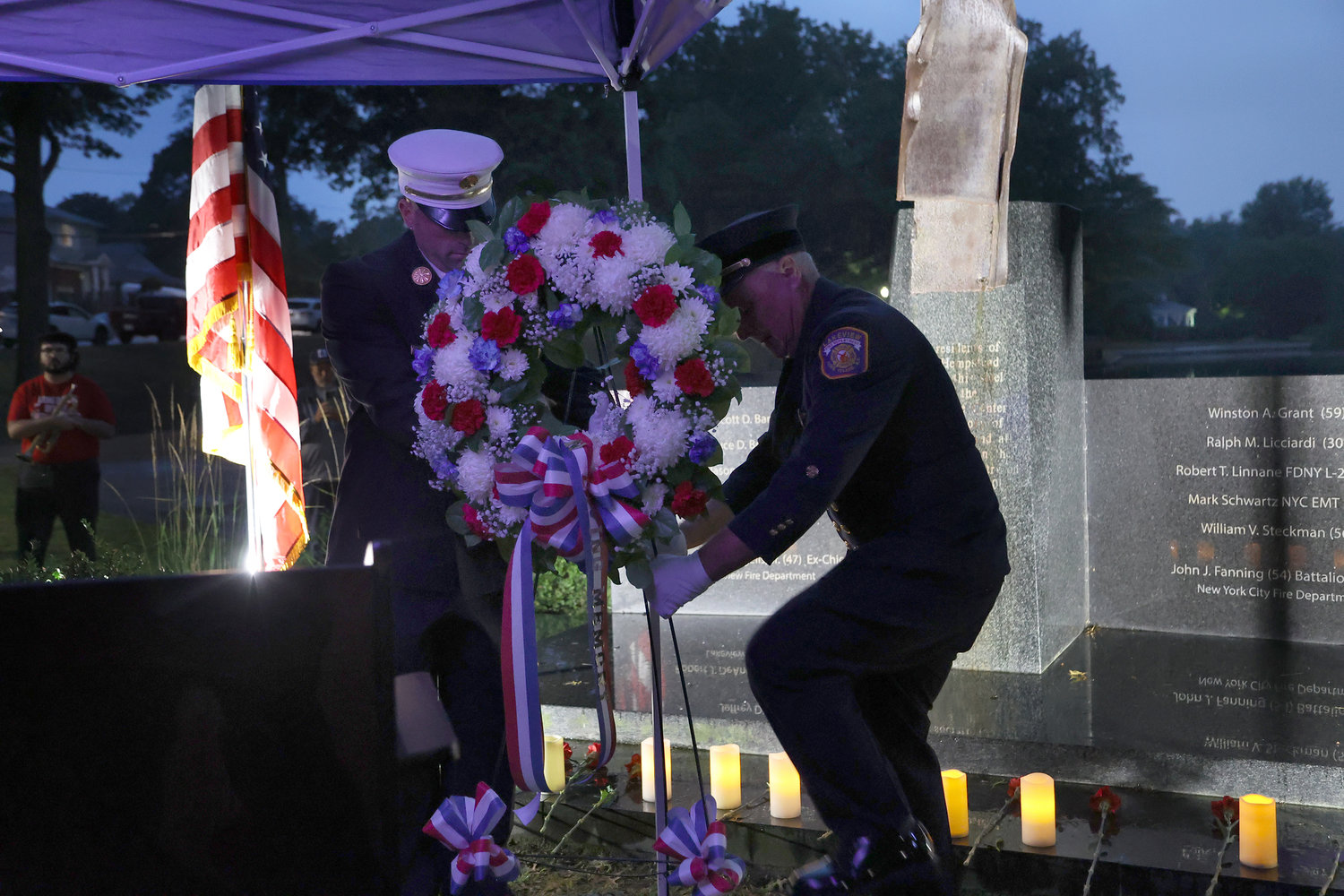 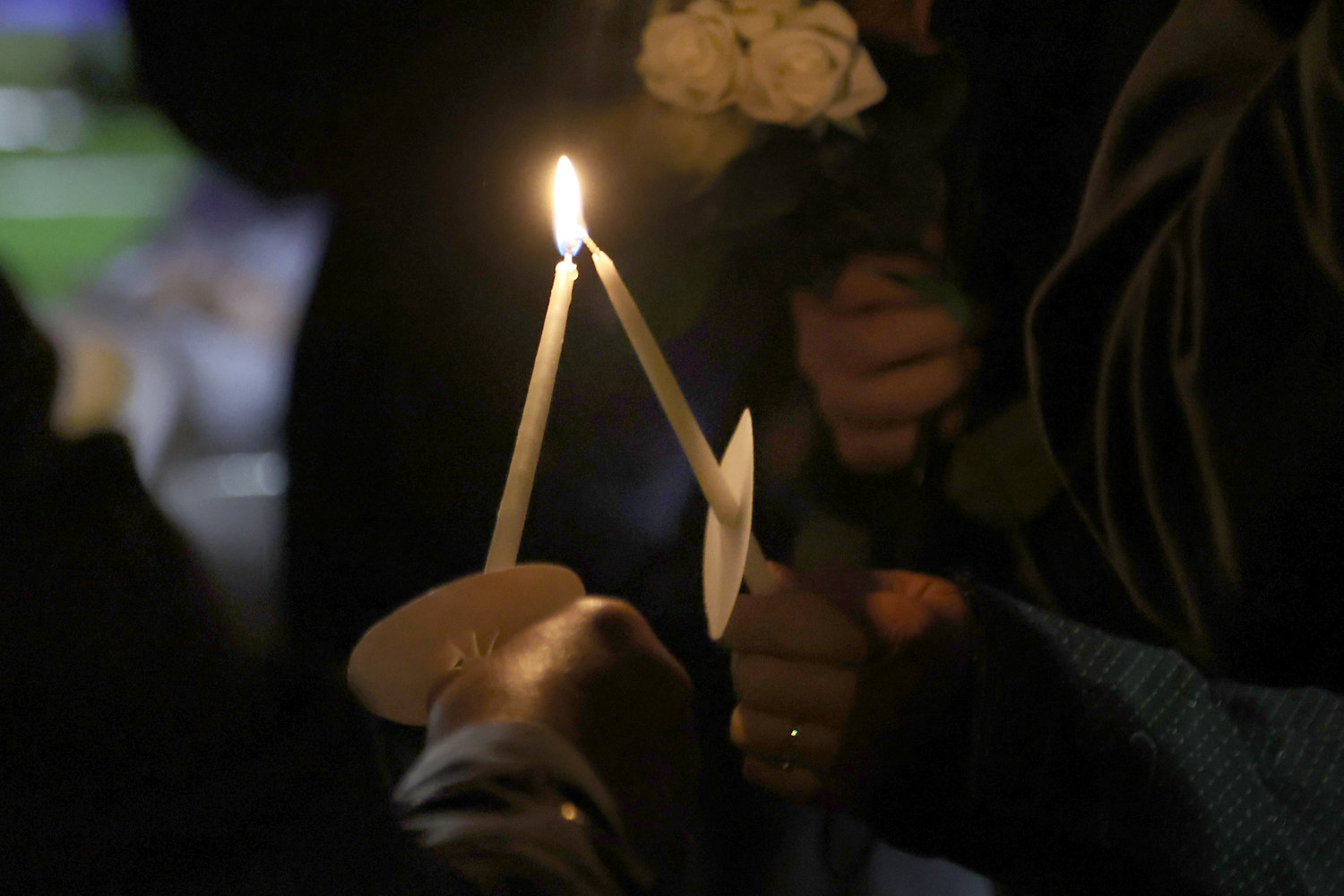 People attending Malverne’s Sept. 11 memorial ceremony in the village’s gazebo park passed candle flame from one to another.
Sue Grieco/Herald 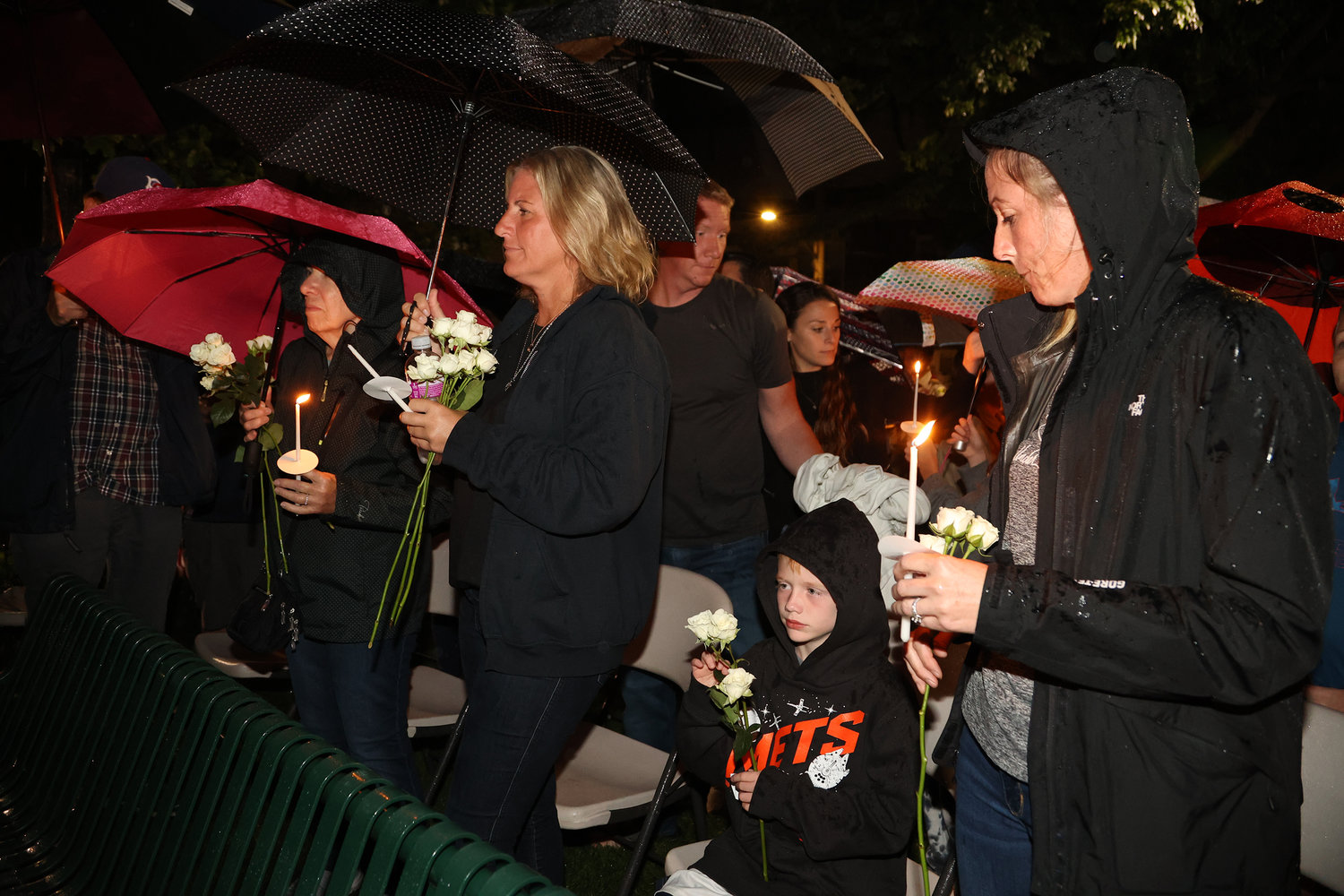 The rain did not stop many from coming to Malverne’s gazebo park to pay respects to those killed in the Sept. 11, 2001 terror attacks on the United States.
Sue Grieco/Herald

Kaylee Palmer sings Amazing Grace as family members of those lost on 9-11 place flowers at the Memorial.
Sue Grieco/Herald
Previous Next
By Kyle Chin

Malverne and West Hempstead assembled once again to reflect on the tragic events of Sept. 11, 2001 and especially remember their friends, family, and neighbors who died that day.

21 years have done little to dull the shock and grief for many who remember that day, particularly for those who lost loved ones. Yet, much has changed since 2001, and as time marches on, growing numbers of young people have no direct memories of the deadly attacks.

Many of the speakers at the service alluded to the spirit of unity that emerged in the wake of the 9/11 terror attacks, contrasted with the deep divisions that now often seem to dominate the American public sphere.

“We must rekindle what America stands for, who we are. We are a very just, gentle, generous nation. That is our soul and that is our spirit,” said Town of Hempstead Councilman Tom Muscarela.

Rabbi Art Vernon of Congregation Shaaray Shalom echoed these thoughts. “We remember how united we were as a nation after 9/11, and our hope is that spirit, which we all experienced, and which many of us still hold dear, will continue to inspire us, and again we shall know that unity that comes from shared experience and common goals,” he said.

Malverne Mayor Keith Corbett focused his remarks on the importance of keeping the memories of that terrible day alive within succeeding generations.

“I would really like to speak directly to the children of Malverne,” he said. “We’ve said since that solemn day that we’ll never forget, and we won’t. But at some point in the not too distant future and decades from now, many of us who have those images in our consciousness may no longer walk this earth.”