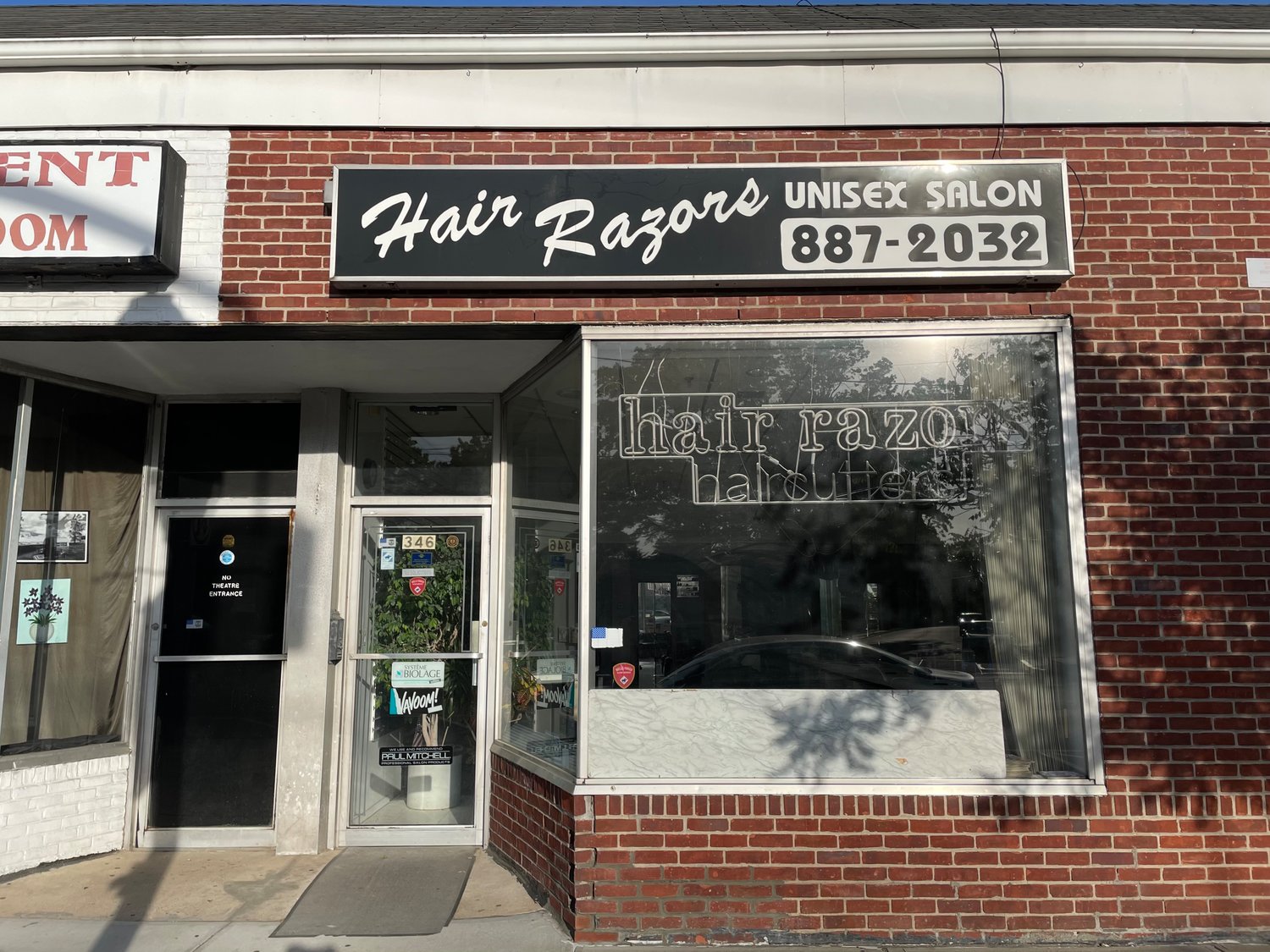 The dark storefront of the defunct barbershop.
Kyle Chin/Herald
By Kyle Chin

On a sweltering Saturday afternoon in May, Malverne staple Hair Razors closed its doors for the final time.

Ben Ciorra Sr. opened Hair Razors 56 years ago at 362 Hempstead Ave., next to Angelo’s Pizza before moving a few storefronts down to 346 Hempstead Avenue in about 1985. Throughout the years, the barber shop serviced three generations of customers. Ben Ciorra Jr., the son and namesake of Hair Razors’ founder, could be found at his post on the store’s last day of operation to offer comments.

Events of recent years have been punishing on small businesses throughout the country, and Hair Razors has been no exception. Ciorra suggested that it was a confluence of factors that ultimately drove the decision to close up shop. From the pandemic era drop in business, to rising rent prices, to increasing costs of supplies, it was a struggle to stay afloat.

Forced to shut down in the initial waves of Covid-19, Ciorra noted that foot traffic remained slow even after lockdowns were lifted. “Once Covid started, there was a mandatory shutdown for four months,” he explained. “In this kind of business, you rely on your weekly customers. After they were home for four months, many of them didn’t return. They got used to not coming in. They let their hair grow, they let their color grow out, and it took quite a bit of business away.”

Early in the pandemic, the Malverne Chamber of Commerce participated in a program promoting patronage of local businesses including Hair Razor’s. The barber shop also received loans from the Paycheck Protection Program. The assistance was ultimately not enough to overcome the battering offered up by the pandemic era. “We tried for some loans and things, and that didn’t work out, and we had to make a decision, after 56 years, that we just couldn’t afford it,” Ciorra stated regretfully.

Ciorra noted that in their final week, numerous long-time customers came around to say their goodbyes. “This week, our last week, was very busy, because everyone heard we were closing, so they came in. You know, if we were to have had this week for the last two years, we would’ve been in better shape.” Taking stock of the situation as a whole, he concluded, “right now everyone’s in a bad spot. This wasn’t our intention, but it’s the card we were dealt with.”

Some of Hair Razors’ legacy customers took to the social media to reflect on their experiences with the barbershop.  Patron Leigh Fanuzzi, commented, “Ben has been coloring and cutting my hair for 40 years, and I started by the shop by Angelo’s also. They will be missed.”

Another longtime customer, Joan Solinto expressed her sadness at the news. “I am sad to hear that Hair Razors will be closing. They are such nice people and I know they will be missed.” She reflected on the relationship her mother had with the storeowners. “My mom was Ben’s client for 30 years and mom went to him regularly every week. Mom was 101 years old and they were so kind and caring. Mom passed away in July 2021 and I know she would have been devastated to learn they are closing.”

Susan Murphy recalled many decades with the Ciorras. “I had my hair done there the night before my communion (1971 or 1972). My mother Virginia had a standing appointment to have hers done every Friday for decades. When she passed away, Ben was the first person to arrive at the wake. I was so grateful.” Murphy concluded with well wishes for the barbers, sating “good luck to the owners and staff in their well-deserved retirement, and thank you for the beautiful services you provided to countless customers and friends through the years.”