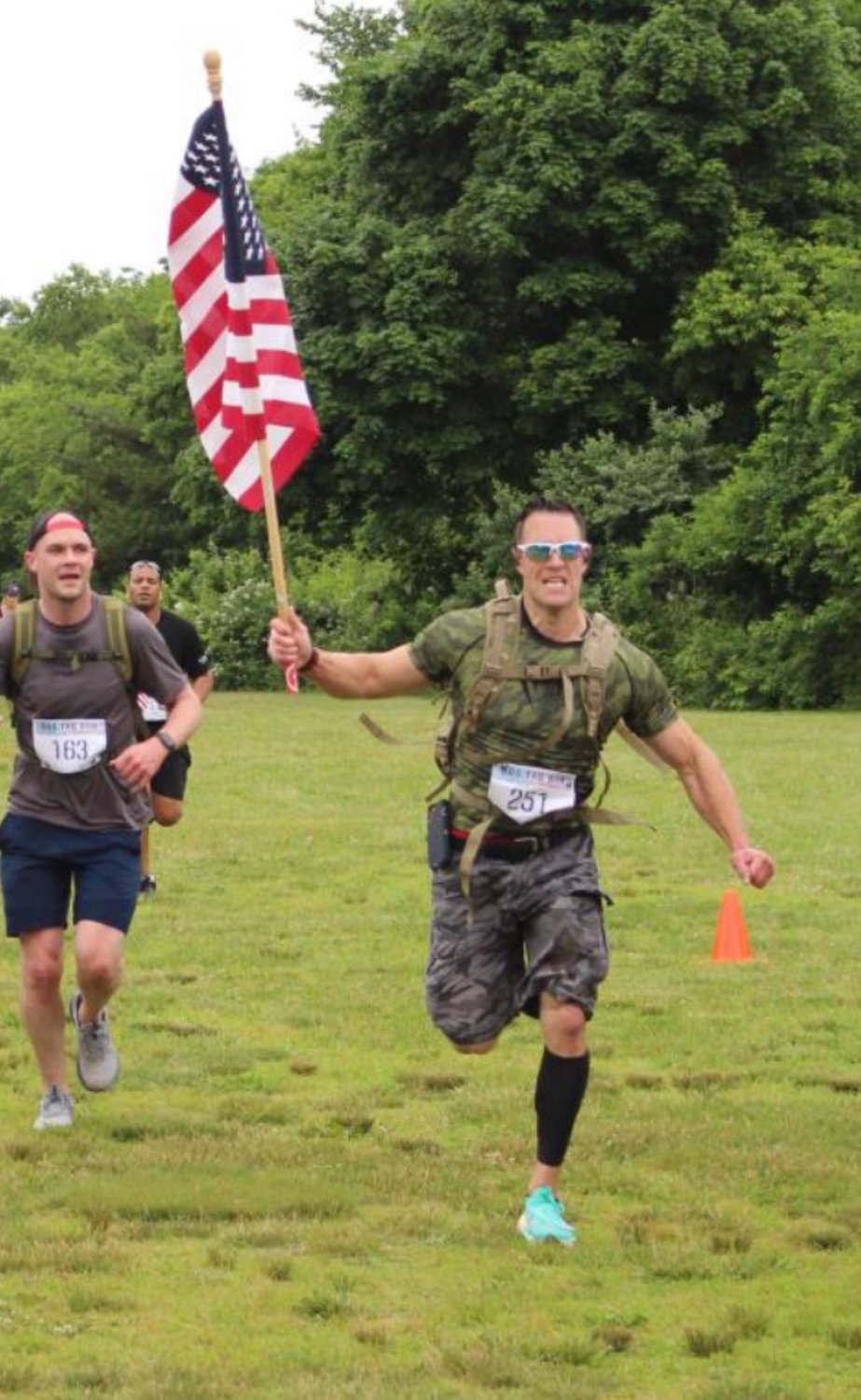 Greg Waxman, now known as “The Patriot Man,” ran anonymously through Malverne each day during the early months of the coronavirus pandemic.
Courtesy Greg Waxman
By Robert Traverso

Before 2022, the identity of the man who ran throughout Malverne each day at the height of the coronavirus pandemic, carrying an American flag, was a mystery.

Today, Greg Waxman, of Malverne, nicknamed “the Patriot Man” by residents on Facebook, is openly planning a 50-mile run throughout the village on May 6 to raise $10,000 for veterans, police officers and first responders, as well as their community organizations.

Waxman, who grew up in West Hempstead and has lived in Malverne for 11 years, has participated in a 50-mile run in honor of Lt. Michael Murphy, a U.S. Navy SEAL officer, originally from Smithtown, in Suffolk County, who was killed in 2005 while serving in Afghanistan.

When the pandemic struck, Waxman was training for the most recent run in Murphy’s honor. The last quarter-mile is always completed while holding the American flag, which is when Waxman became inspired to run around Malverne bearing the flag.

“People would honk, they would give me a thumbs-up … the response was tremendous,” Waxman, 39, said of his popularity in the village.

“I remember seeing Greg run around the village every day at the beginning of the pandemic, and members of the ‘I Love Malverne’ Facebook group posting [photos] of him and trying to figure out who he was,” said Sgt. Rob Lang of the Malverne Police Department.

When Waxman took to the streets of the village early on in the pandemic, he made a positive, uplifting contribution to the community, Lang said. “Greg truly inspired so many people during that time — to get out of the house and be active, to love their community and to do something good,” he said.
“Him running for all these first responder missions is so fitting,” Lang added. “These are the heroes who left their homes to protect us during COVID, and Greg is truly amazing for doing this — for them and for the entire Malverne community.”

On May 6, Waxman said he hopes to “make the neighborhood better” again. The 50-mile run, called Operation Hero, is raising funds for several purposes: to provide a support dog for local veterans; to donate to the Steven McDonald Foundation in honor of the late New York City Police Department detective, who was from Malverne; and to plant trees in Westwood Park in honor of the late NYPD officers Wilbert Mora and Jason Rivera, who were killed earlier this year, and Sergeant Thomas Winters of the Malverne Police Department, who died suddenly in 2021.

Waxman hopes to raise more than $10,000 for these efforts. While he has already raised $700 from 12 supporters online, he said he is closer to $2,000 due to checks sent by residents to the village that he has yet to obtain.

On May 6, Waxman and Peter Hawkins, the world-renowned wheelchair racer who Waxman called a hero of his, will be racing a 3.75-mile route through the heart of Malverne, starting at Westwood Park, over 13 times, to complete a total of 50 miles in honor of service members.

Waxman said he hopes to pay respect to veterans, police officers and first responders through the May 6 run. “We’re not the land of the free unless we take care of the brave,” said Waxman, who noted that he has family members who have served in the NYPD in the past and that his grandfather served in the military during World War II.

“I feel like they deserve the ultimate respect,” he added of those who serve the U.S. in any capacity.

The run is planned for 6:30 p.m. on May 6, with a rain date of May 7. Donations to Operation Hero can be made with a credit card by hitting “Give Now” on the upper right of the page at grouprev.com/NSRF202-gregory-waxman.

Waxman said he hopes the 50-mile run will bring awareness to these causes and allow him to launch a 5K throughout Malverne and potentially a charity in the future.
In the meantime, the Malverne native said he hopes to continue inspiring residents with this run.

“They kind of rally around me, so I just want to run with it, literally,” Waxman said.