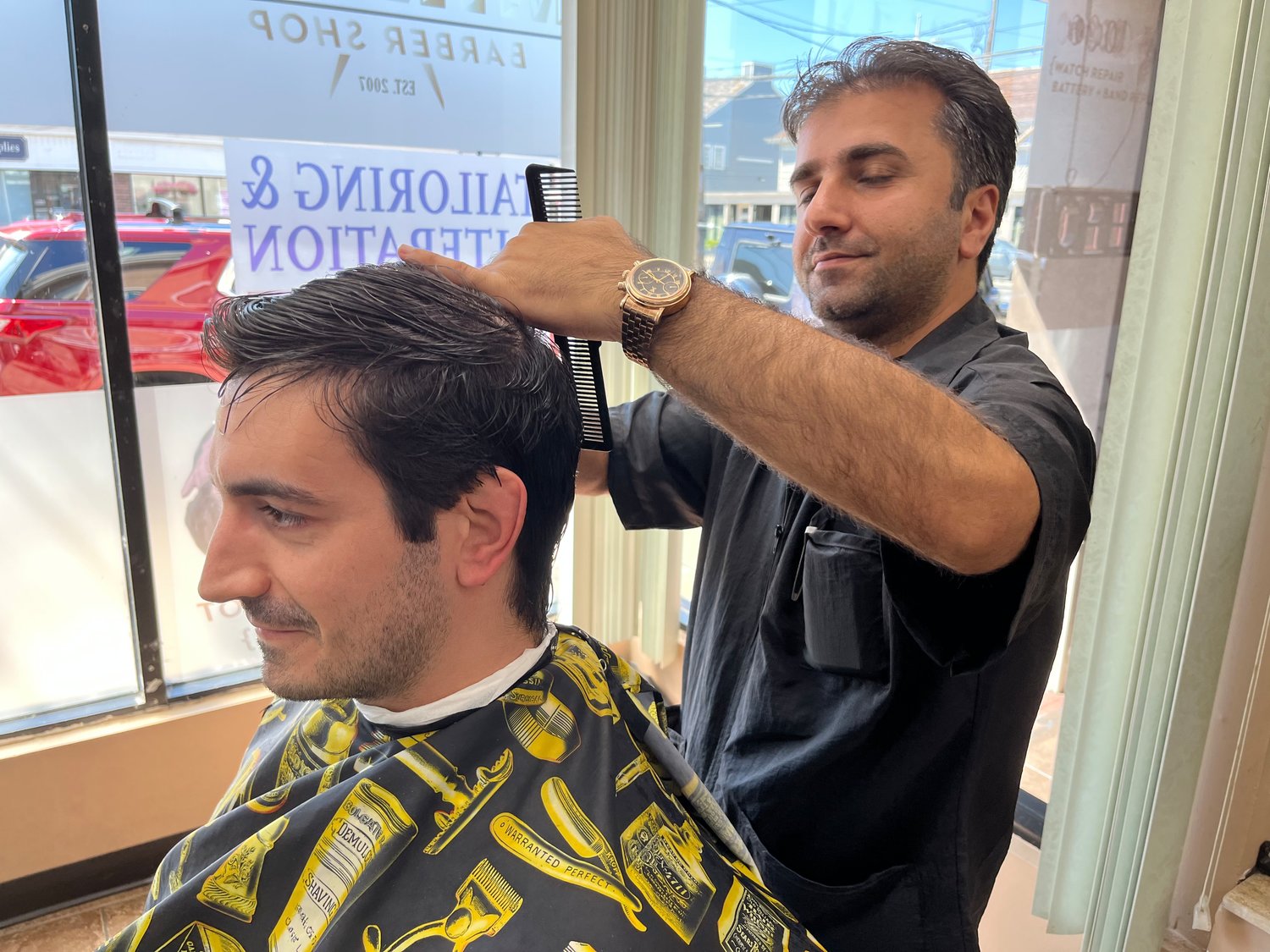 Mike Khimov will always chat with customers like Ryan Brunetti while giving them a haircut at his shop in the hamlet.
Will Sheeline/Herald
By Will Sheeline

Mike’s Barber Shop in Oyster Bay has been a staple in the community for many years, and people come from different parts of Long Island, and some even farther afield, to get their hair cut there. What keeps them coming back is more than just a good trim, however.
Mike Khimov was born in northern Uzbekistan, which was part of the Soviet Union at the time. He came over to America with his parents when he was 12, in 1995, following the collapse of the Soviet Union.
The Khimovs settled in Queens, where Khimov still lives to this day with his wife and two children. His grandfather was a barber who encouraged him to get into the business, and from the age 14, Khimov began learning the ins and outs of cutting hair.
“I work since I was 14 years old. I’m a barber, you know,” Khimov said. “I went to barber school in the city, went to Italian barber shops, learned from them, got a lot of experience.”
Khimov’s career took him to numerous shops across New York, from Queens, Manhattan, Brooklyn and finally to Nassau County. He worked for many years at Manny’s Barber Shop, learning the different tricks of the trade.


Eventually Khimov saved up enough money to purchase his own barber shop, but at first wasn’t sure where to go. At the time some of his customers at Manny’s were from Oyster Bay and encouraged him to open his store there since the hamlet was lacking one at the time.
In 2007, Khimov opened Mike’s Barber Shop at 121 South Street in Oyster Bay. He said it was one of the best decisions he’s ever made, mainly because of how welcoming and friendly the hamlet’s residents have been.
“There’s nice people, good people, friendly, helpful,” Khimov said. “All my customers, they’re like family to me, and I’m family to them. I see their kids, grandkids grow up, get married they bring their kids. It’s a family barber shop.”
Khimov’s employees are all originally from Uzbekistan as well, and several also studied with him at barber school. When customers aren’t in, they will frequently speak to each other in Uzbek or Russian, joking and chatting like they’re back in the old country.
For Khimov’s customers, getting a good haircut is just one of the many benefits of going to Mike’s Barber Shop. There’s good conversation there and friendly companionship that Khimov and his employees provide during the process.
Ryan Brunetti, originally of Bayville, said he’s been going to Mike’s for five or six years, first coming with his dad. Although Brunetti now lives in Tampa Bay in Florida and was cutting his own hair for a while during Covid, he says that when it comes to barber shops, he’ll still only get his hair cut at Mike’s.
“Honestly getting my hair cut here is one of the main reasons I keep coming back to Long Island,” Brunetti said, only half-jokingly. “Mike gives a great haircut, and it’s a way better price then anything I can get in Florida.”
Another long-time customer, albeit one who doesn’t take a flight to get his hair cut at Mike’s, is Peter Rotolo of Upper Brookville. Rotolo has been coming to Mike’s Barber Shop for roughly a decade now.
What he likes about Mike’s, he said, is how friendly Khimov and his employees are, and how when he’s there he feels at home.
“Mike’s a great guy, and the fact that he’s been around so long is a testament to the great customer service you get here,” Rotolo said. “You don’t make it in a business for 16 years without having good customer service and doing a good job.”
Report an inappropriate comment

Town given update on Grand at Baldwin development

From Turkey to Long Island, Merrick jeweler runs a gem of a business

Rason Road proposal in Inwood is open for IDA study

Long Beach’s Fall Festival to mark turn of the season