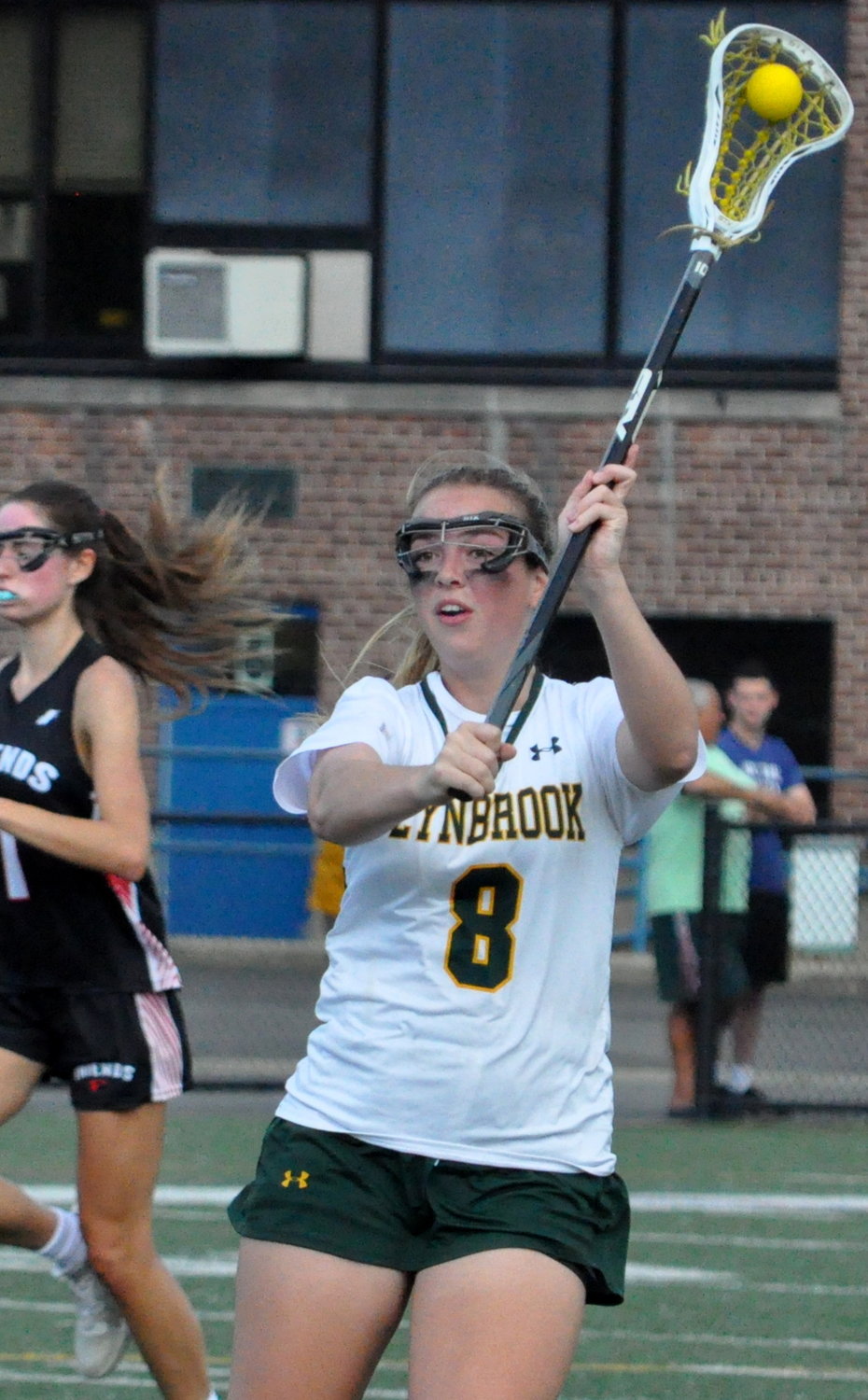 After going undefeated in April, Lynbrook girls’ lacrosse carried its momentum into May and also into the Nassau Class C playoffs.

The seventh-seeded Owls held visiting Friends Academy to only two first-half goals and rolled to a 15-9 victory in a first-round playoff matchup Tuesday on the turf at Marion Street Elementary. Junior Mimi Berkowitz scored three early goals, junior Kaelynn O’Brien added a hat trick in the first half, and junior Sara Curley and freshman Brooke Mazzei had four goals apiece as Lynbrook won its 14th consecutive game and advanced to face defending county champion Manhasset in the quarterfinals.

“We have amazing chemistry and everyone contributes,” said Lynbrook junior midfielder Caityblu Cavassa, who had three assists and dominated draws. “We had a bit of a rocky start losing two close games, but I think those made us stronger and we’re on this incredible win streak.”

The Owls, who finished runners-up in Conference II, haven’t lost since a 15-14 nailbiter to Bethpage on March 29. That came three days after a season-opening 17-16 defeat to eventual conference champion Seaford.

“It’s been quite a ride,” Lynbrook coach Vincent Tetro said. “The girls were fired up for a home playoff game today and came out hungry.”

Lynbrook defeated Friends, the No. 10 seed, three weeks earlier in a conference matchup, 19-14. Tetro said the gameplan in the rematch was to contain the Quakers’ 1-2 scoring punch of Paris Panagopoulos and Skylar Cohen, who combined for 11 goals in the April 26 meeting. “Paris is one of the best midfielders on Long Island,” Tetro said. “We wanted to make sure we had a lock on her and also double down when we needed to. I thought we did a great job, especially in the first half.”

Panagopoulos, who was held in check by Lynbrook junior Tyla Vuotto, scored 70 seconds after the opening faceoff to give Friends a 1-0 lead but was kept off the scoreboard for the remainder on the first half. She finished with three goals; Cohen netted her team's other six.

The Owls took command early and built a 7-1 lead in the opening 6:40, including five goals in a span of four minutes. Tetro credited Cavassa’s success on draws for allowing Lynbrook to gain momentum and keep it.

“It’s what Caityblu has done throughout the year,” Tetro said. “The best way to describe her is she’s a game-changer.”

Berkowitz’s third goal of the game was her 39th of the season and capped the early onslaught which included a pair of goals from both Curley (45 goals, 26 assists) and Mazzei. O’Brien then capped a 10-goal first half with her third of the afternoon and 38th of the year. Friends goaltender Alex Poll kept the score respectable with 16 saves.

“Every game has been a total team effort,” said Tetro, who noted the defensive zone efforts of senior Olivia Vuotto and freshman Gabriella Meszaros. “We have a close-knit group,” he added. “We’ve gotten contributions up and down the lineup all over the field all season.”