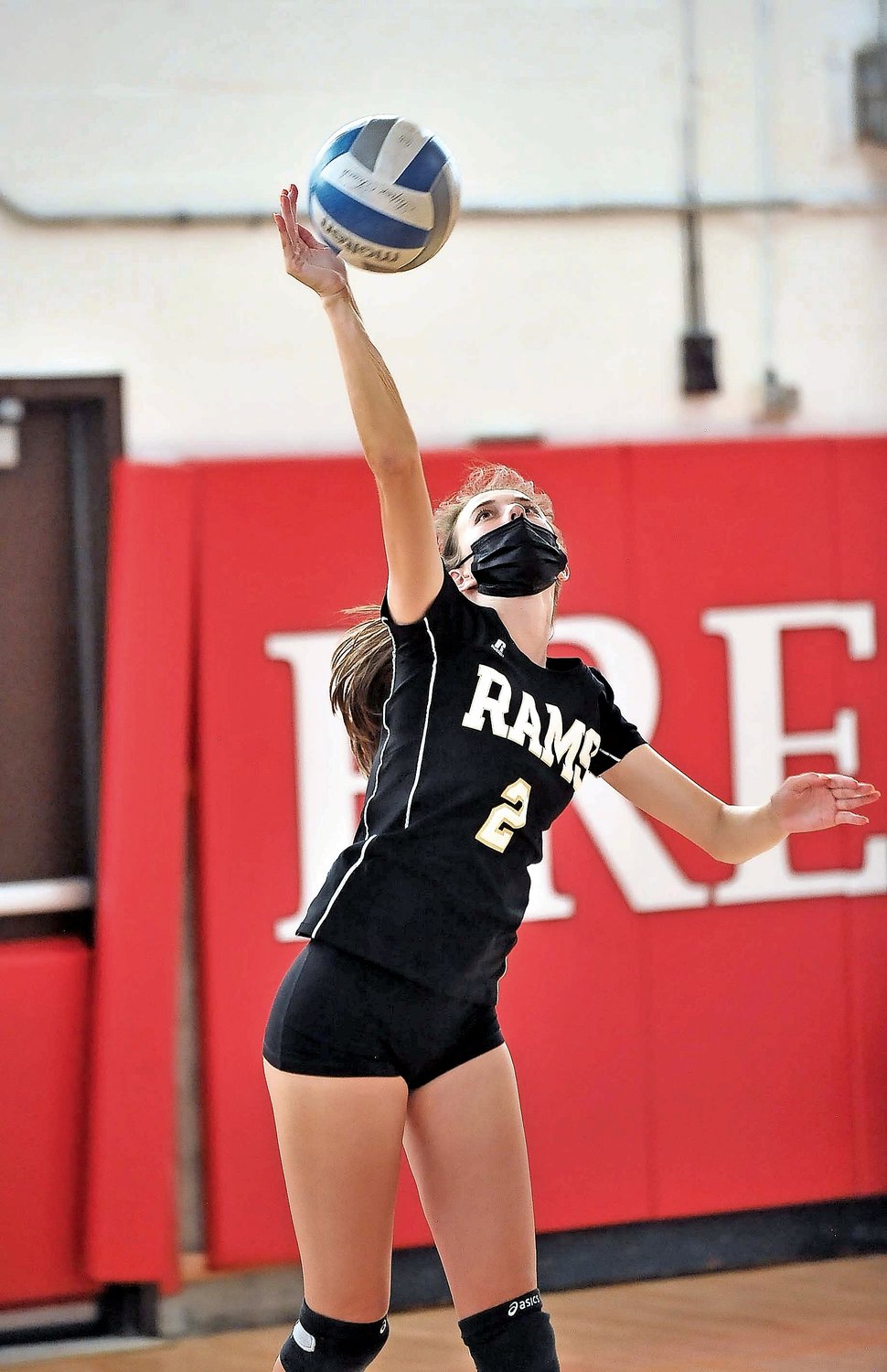 Senior Amanda Healy directs West Hempstead's offense as its lone setter and has brought an improved serve to the court this fall.
Anthony Hughes/Herald
By Tony Bellissimo

With a goal of hosting its first playoff match in about a decade in mind, West Hempstead’s girls’ volleyball program continues to thrive under third-year coach Ryan Dooley with an 8-1 mark after reaching the Nassau Class B semifinals in the spring.
“These girls have had success throughout their high school careers,” Dooley said. “Two years ago we had an undefeated JV and the varsity went 12-4. And last season I think we were ahead of pace getting to the semis.”
The Rams are 28-7 overall under Dooley and Suzanne Kenney, who stepped in to coach the majority of the spring season as Dooley battled Covid-19. Dooley returned for the playoffs and West Hempstead upset Island Trees in the first round.
“The way the conferences are aligned this fall, we’ll be seeded fourth or fifth in the B tournament,” Dooley said. “Right now we’re in position to host a playoff match because we beat Island Trees twice and they have three losses.”
West Hempstead trails only Farmingdale in the six-team Conference AA/B3. The Dalers took the first meeting between the teams on Sept. 20 in four sets. The rematch is Oct. 25 in the regular-season finale and the Rams can earn a share of the conference title if they run the table.


“It’s not an impossible task, but Farmingdale plays at a fast pace and is the best serving opponent we’ve faced,” Dooley said. “If we’re healthy and bring our ‘A’ game, there’s a shot.”
The Rams took a hit in the health department last week when junior middle hitter Gloria Guerrier suffered an ankle injury in practice. She’s expected to return in time for the last few regular-season matches if all goes well with the healing process, Dooley noted. Senior Abigail Rodriguez and sophomore Ayanna Simpson are being counted on to pick up the slack. “Gloria’s one of the most explosive athletes we have and also our top server,” Dooley said. “Her speed in the middle opens things up for our outside hitters.”
Steering the offensive ship is senior setter and captain Amanda Healy, who dished out 218 assists through the first nine matches. “She’s improved her placement with passes and also serving,” Dooley said.
On the outside, senior Sanaia Estime has returned to her All-County form of 2019 after missing almost all of last season with an injury. She’s a powerful hitter who leads the Rams with an average of 10 kills per match. “Sanaia is our hammer and also solid defensively,” Dooley said. “She reads the game better than anyone.”
Sophomore Kerilee Vargas has burst onto the varsity scene as an outside hitter and showing a high level of skill in all areas. She’s been a key to the defense along with Estime and senior libero Jayda Ramos.
Junior middle Chance Mingo is coming off an All-County season and ranks second on the team in kills. “She’s such a fiery competitor,” Dooley said of Mingo, who had 8 kills in a sweep of Malverne on Sept. 29.