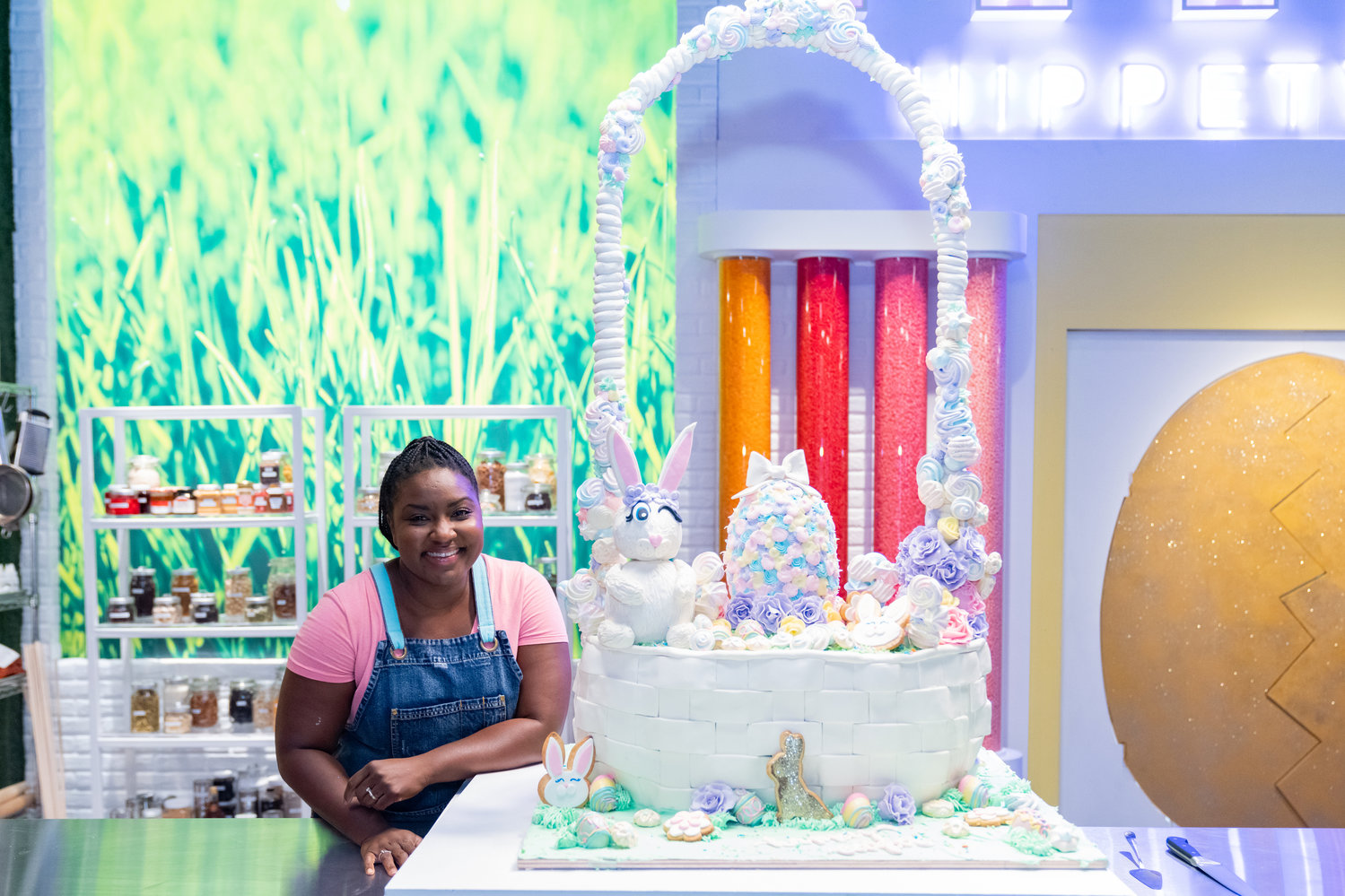 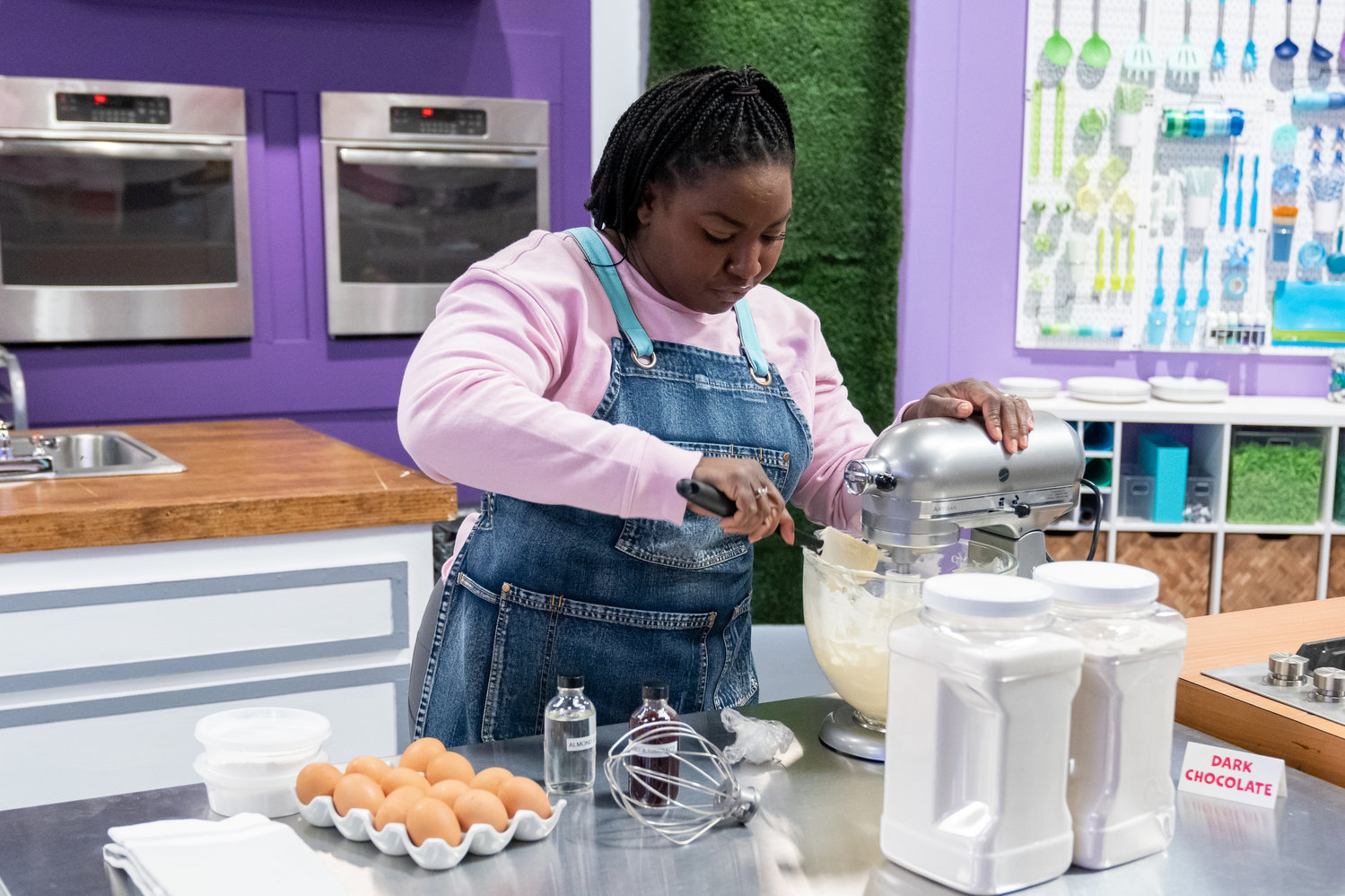 Perry didn’t get into her “groove,” she said, until Episode Four — her favorite — when she started to decorate sweets in her own style.
Anders Krusberg/Food Network
Previous Next

I told Sydney I knew she was going to win.”
Jermaine Perry, Sydney's Sweets Co-Owner
More on Sydney Perry

Perry grew up in Queens, baking with her mother on weekends and developing a talent for creating delicious pies and cakes. Though she was always creative and fond of art, Perry graduated from Howard University in Washington, D.C., in 2005 with a degree in accounting and finance.

Afterward she took up baking as a serious hobby. She became skilled at cake decoration, and started a bakery business in 2006 in her mother’s kitchen, all while working in finance.

In 2013, Sydney and her husband, Jermaine, “decided that it was time to give our dream a real chance,” Sydney said. That same year, the couple opened Sydney’s Sweets, on Hempstead Avenue. The business and its clientele have continued growing.

“Overall, the experience was exciting,” Perry said. “It was, like, a little bit stressful, but it was a lot of fun.”

The show's second season,  which premiered on Feb. 28, was a competition among eight bakers, who, given several baking challenges, used their imagination and skill to create unique sweets. Food Network judges Jordan Andino and Stephanie Boswell were the arbiters. The final episode aired on April 4.

“This season’s spectacularly talented bakers create some of the most impressive edible creations ever on Food Network,” host Sunny Anderson said in a news release.

There were up to two challenges in each of six episodes, and the judges decided which baker went home in each episode. The competitors vied for the Golden Easter Egg filled with “bunny money,” a $25,000 prize.

A casting director from the Food Network contacted Perry last May, and three months later she was competing at Silvercup Studios in Long Island City. The whole recording process took nearly two weeks, with days that were up to eight hours long.

The most difficult round for Perry was the final episode. Not only was her cake four feet tall, but also she had to remake it twice after a couple of mishaps: it got stuck in its pan, and a remade version rolled off the countertop.

“I thought I was gonna just have a meltdown right there, but I pulled it together and I made the cake for a third time,” Perry said. “And you know, in the end it all worked out, but it was so stressful.”

In the fourth episode, her favorite one, she made an edible sash — covered with three-dimensional chocolate eggs and rainbow-pastel fondant flowers — and crown to wear on a runway. Her theme was “EGGstravagant Queen.”

“That was the episode where I really finally got into my groove and started decorating items the way that I would do them at the bakery,” Perry said. “I started to really get to bring in my own personal style — and being able to walk the runway was a lot of fun.”

When the competition came down to the final three bakers in Episode Six, Perry was surprised to find out that she won. “They said my name and I had a delayed reaction for a second,” she recounted. “I was like, wait a minute, did they say my name? I was super surprised and excited — I was at a loss for words for a moment.”

“I told Sydney I knew she was going to win,” said her husband, Jermaine.

The $25,000 will go to new bakery equipment, a family vacation, savings for the Perrys’ son Cameron, 8, and future small-business needs, they said. The family had to keep the results under wraps until the entire series aired. Along with all of the emotions that come with winning, the family was “relieved” to celebrate the win, Jermaine said. “I think [we’re] mostly just happy that it’s out and no longer something that we have to hold in,” he said.

The couple is also proud that Cameron managed to keep the secret. “He would always catch himself when he knew he was talking too much — he would never spill the beans,” Jermaine said. As soon as the final episode aired, Cameron made an announcement to his third-grade class at Stewart Manor Elementary School in Garden City.

“When he saw the finale, he screamed and cheered and hugged [his mother] and it was just like, the sweetest moment,” Jermaine said. “It means so much as a parent to make your children proud, and to let them know that they can, you know, create and be and do anything.”

Since the finale aired last week, Sydney’s Sweets has gained nearly 1,000 Instagram followers, and more people from West Hempstead and all across Long Island are stopping by.

“There’s more and more people that come in and say like: Oh, I saw you on the Food Network and I didn’t realize you were right by us,” Sydney said. “People that haven’t been in in a long time have seen it and are coming back — so that’s really great.” The bakery is “expecting a big rush this weekend,” Jermaine said.

And in response to many customer requests, the chocolate coffee liqueur cake his wife baked in Episode Six is now being added to the Sydney’s Sweets menu.