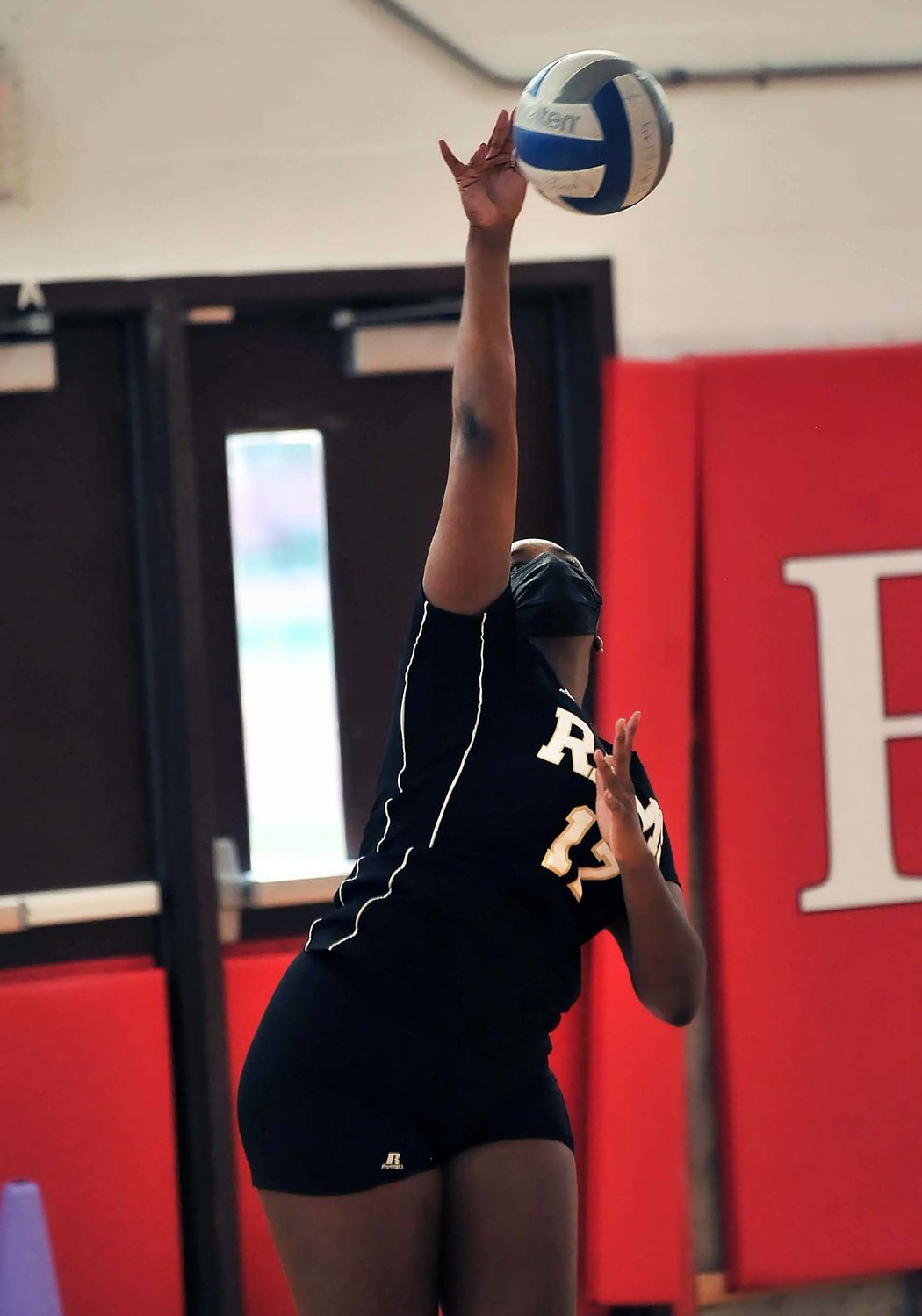 Senior Sanaia Estime is a four-year varsity starter who bounced back from an injury plagued spring season to help lead the Rams to 13 victories.
Anthony Hughes/Herald
By Jamie deJong

West Hempstead’s girls’ volleyball team put the finishing touches on what was a very fruitful regular season last week. The team finished with a 14-3 record, which was the second-best mark in conference AA/B3. Coach Ryan Dooley was by no means surprised by the team’s quality of play.
“We have a very talented team,” Dooley said, “We had a bunch of key girls come back after last year and our JV team two years ago was undefeated so they haven’t that many chances to lose in their years here.”
The Rams did have a rare loss early in the season to Farmingdale, in which they lost in four close sets. Dooley thought that the experience helped them come together and garner confidence for the rest of the way.
“We took the first set from Farmingdale and that was the first set they dropped all season,” Dooley said. “We realized that this was a great team that we were playing against and we are hanging with them. Some of the girls on the team had only lost 2 or 3 teams prior to that so it was a great learning experience.”
After this loss, the Rams went on a dominant 6-match winning streak, in which the team didn’t lose a single set along the way.


West Hempstead’s offense relies heavily on pace, as Dooley said that the Rams easily have the fastest pace in the league. Amanda Healy has initiated a lot of the offense as the primary setter. For the season, she had 390 assists and tallied 40 aces. The 390 assists were the second most in all of Nassau County.
“Amanda’s been the quarterback off our offense the whole year,” Dooley said. “We need her to play well to win and she’s been consistent all year.”
Junior middle Chance Mingo has also provided a well-balanced skill set to the roster, as she tallied 112 kills and 43 aces throughout the season. She came into the season with lofty expectations following all-county honors last season. She was a little bit rusty in the early portion of the season, but reverted back to her high standard of play later in the year.
“Chance really started dominating mid-way through the season,” Dooley said. “We moved up a conference so I think the change in competition kind of caught her off guard but she shook it off and started getting a lot of kills for us.
Senior Sanaia Estime missed most of last season with an injury, but she has shown no signs of rust this season. She had 161 total kills during the season, which is the most on the roster. Her season high for kills was 17, which she tallied in a dominant performance against Clarke.
Sophomore Kerilee Vargas also has played a key role in the offensive attack, as her 45 aces were the most on the team.
The Rams earned the No. 4 seed in the Nassau Class B playoffs and were scheduled to face No. 5 Cold Spring Harbor in the first round on Tuesday evening after press time.