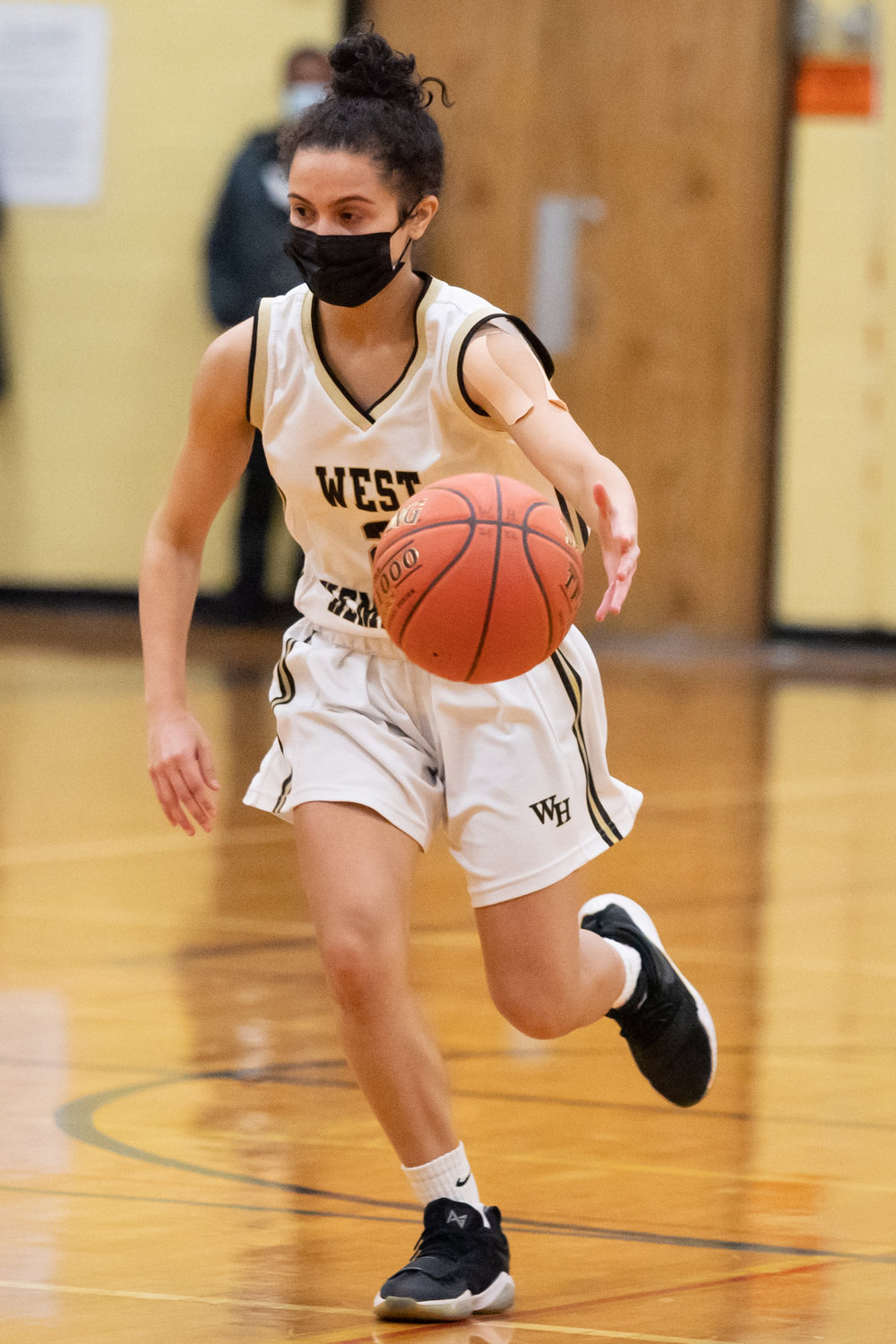 After batting much of the season short-handed due to illnesses and injuries, West Hempstead is back to full strength and primed for a late push toward a possible playoff spot.
West Hempstead’s 47-39 home win against Oyster Bay on Jan. 18 marked its first game in over a month with nearly a full lineup. The victory was key in keeping the Rams in contention for the postseason, which can be achieved with at least a .500 league record or a top three finish.
“When some of your best players are out it makes it a bit challenging so getting everyone back is a huge bonus,” said longtime West Hempstead girls head coach Chris Van Kovics.
Senior Isabel Tavarez led West Hempstead with 19 points against Oyster Bay during a game in which the Rams trailed 25-16 at halftime before dominating the third quarter with an 18-8 run. Fellow seniors Chance Mingo and Sanaia Estime were also big in the comeback effort with 11 and eight points, respectively.
The Oyster Bay triumph was followed by a loss to Carle Place last Friday that puts West Hempstead at 5-6 in Conference B-1 entering the week with six games left on the schedule.


Tavarez has been a big offensive force all season for a Rams team that has scored at least 40 points i n eight games. She tallied 27 points in a 60-37 win at Carey on Dec. 29 and 19 points in a 54-29 victory over East Rockaway on Jan. 13.
“She does a little bit of everything,” Van Kovivcs said of Tarvarez. “She is quick and athletic and very good on the defensive end.”
Mingo stepped up when Tavarez was out of the lineup in early January with 22 points in a 49-46 win at Oyster Bay on Jan. 5. She has also been a big defensive and rebounding presence this season.
Estime has been another leading rebounder for the Rams who Van Kovics tried to run set plays for to get points inside the paint.
“She is very athletic,” said Van Kovics of Estime, who is also a standout volleyball player “When she is on and can get to the glass for rebounds and putbacks or even defensive rebounds it makes life so much easier for us.”
Senior point guard Amanda Healy has been an integral point of running the offense with her passing and driving ability. Mackenzie Cates is also stepping up for her senior year as a power forward who can also bring the ball up court.
Catherine Andree, Gianna Cardillo, Emma Shinsato and Aniya James are also big contributors for a team looking to make a late playoff push. The Rams will next host Friends Academy this Saturday for a 10 a.m. tipoff.
“We have to win the defensive boards and limit the second shots,” Van Kovics said. “If we rebound and limit the other team’s second chances and we can get out in transition and score we can do a lot of good things.”